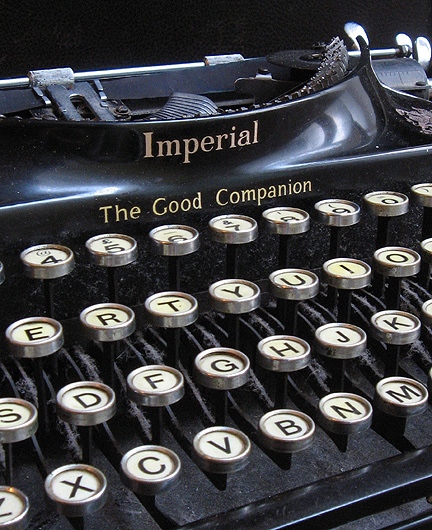 “Don’t be too harsh to these poems
until they’re typed.
I always think typescript
lends some sort of certainty:
at least if the things are bad
then, they appear to be bad with conviction.”


Being entrusted with the Dylan Thomas birthplace and family home for a week was both a profound honor and a matter of great comfort. I felt entirely at home. It had been made very clear to me by my hosts that I could open, sit on, cook with, and operate anything in the house. But making myself at home means doing things with care and reverence. Obviously, all the furnishings and decorations are antiques. I marveled at how the chairs, sofa, clocks, and tables must have greeted an extraordinary variety of visitors. As a gracious guest, I ate and sipped from well-loved plates and cups. An old travel habit of mine is to always bring along a small radio; in a rather lifelike manner, a radio will adapt to its environs and receive only its most proximate signals. Though incongruent with the 1900s-era house, I discreetly placed the little set on the Thomas dining table, tuned to Radio Wales. After all, the present visits the past which greets the moment. 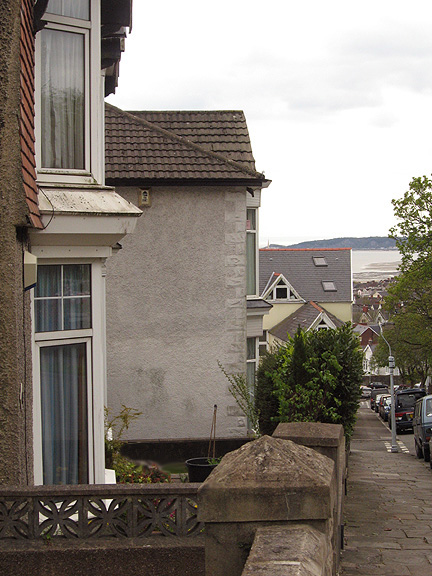 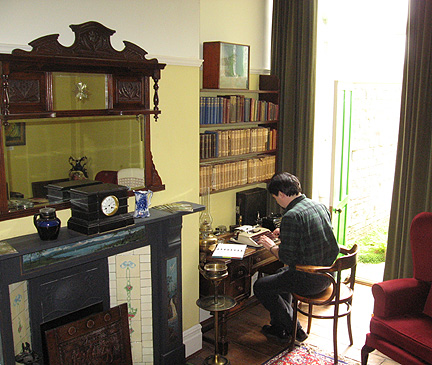 My wanderings in the plain yet unusual house inevitably led to finding some favorite perches. From outside, the house resembles the other contiguous row houses. The home’s distinction is found within; it was clear that Number Five has a kind of soul, one that welcomes and approves of inhabitants being at ease- and writing. On my initial explorations of the small rooms, I was immediately captivated by the typewriter on the desk in the family study. 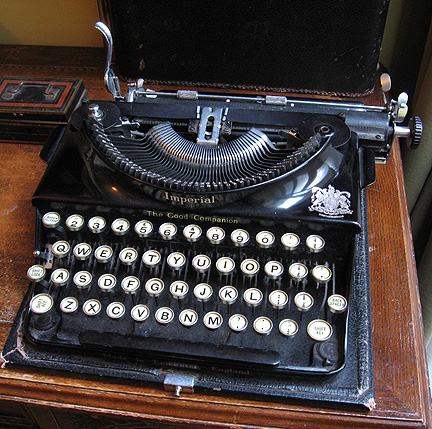 This Imperial Good Companion sounded through the working days of the elder D.J. Thomas, schoolmaster, and his celebrated son and one of the world’s great poets- Dylan Thomas. Along with everything else in the house, the old typewriter was unlocked and just as casually accessible as the shelved books, the spindled gramophone records, and the hutched dinner plates. At first, in my respectful deference, I’d write next to the tools on the desk, with my typewriter next to Dylan’s and using my fountain pen next to his ink stand. Being a guest in the house, it was already a great gift to inhabit the space and write at the desk. 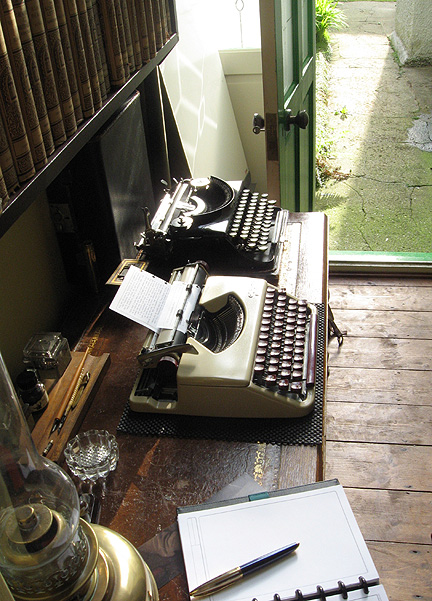 But my hospitable and trusting host encouraged me to live in the house, and not simply inhabit the rooms. Arriving one morning with the first of my reading audiences, the house’s curator could hear my typing from the outside front path, and entered exclaiming, “what a perfectly wonderful sound!” It may have been very many years since sounding streams of typed words had filled the front rooms. The following day, returning to the desk, I tried writing on the Good Companion. Compared to my 1960s Olympia, the antique machine seemed raw and tinny- but it worked just fine, albeit through a dry ribbon. Remembering that I had packed an extra typewriter ribbon for my journey, I ran up the sets of steep steps to my suitcase. But before making the dash, standing up from the old typewriter, I habitually patted it with a “be right back.” After a thumb-blackening respooling of my spare new ribbon onto the old metal Imperial hubs, I began writing with the Good Companion. 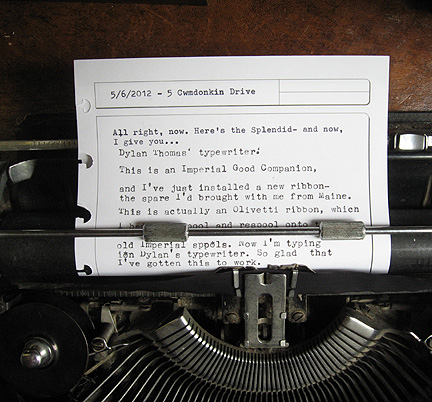 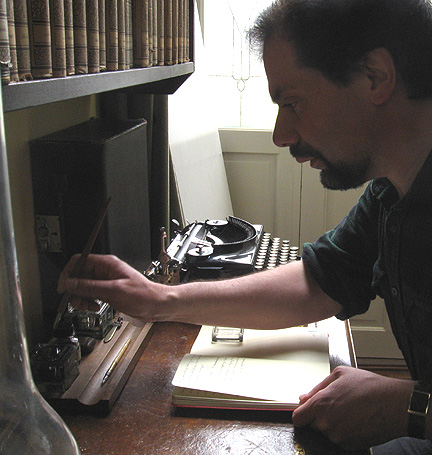 After switching to Dylan's typewriter, I set aside my fountain pen, in favor of his ink stand and dip pens. Indeed, I was well at home!

Picking up speed, I developed a feel for the uncalibrated roller-advance and the way typed letters strike at the top of the platen facing upward, compared to the more modern orientation of typebars striking at the operator’s side of the roller- facing the typist. The bell had an egg-timer’s chime. Typing journal entries and a few letters to mail, I thought of D.J. Thomas, Dylan Thomas, sounds of words, forms of words, and aromas of rained-upon slate surfaces through the open windows. Through the day, my unscrapably inked thumbs and index fingers were writer’s emblems in a great Welsh city of writers. 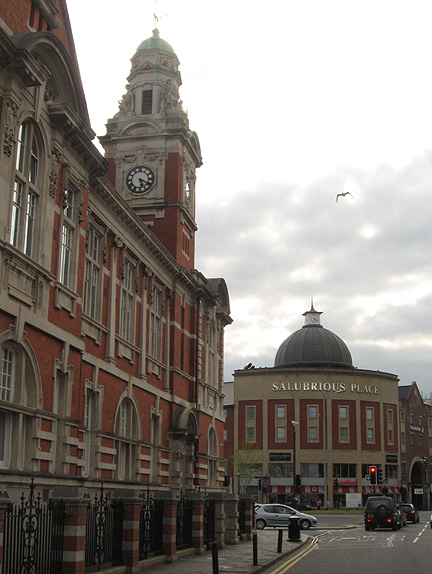 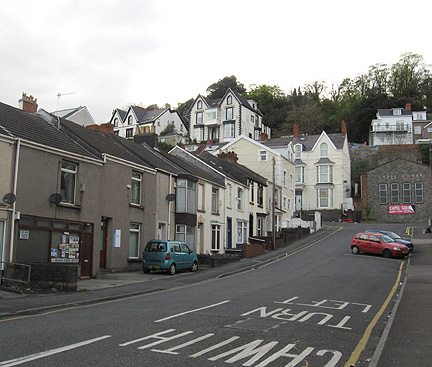 The Uplands section of Swansea, Wales. 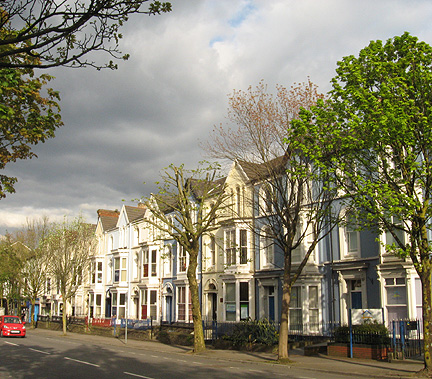 The Uplands neighborhood of Swansea has the ambience of a compact, self-sufficient hilltop village within a metropolis. Surely, the city has its own distinctive character, though I recognized glimpses of old familiar places in Portland and Boston among the steep terrain and bay views from even the humblest buildings. Meandering streets wind out of an artery called Uplands Terrace and collect at Gwydr Square. 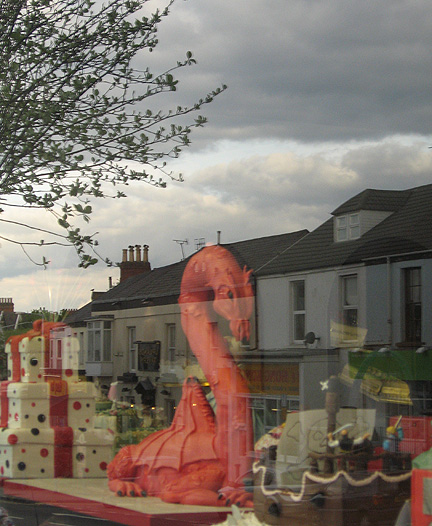 Views of shops on the Square, with a noble bakery red dragon (above), and the newsagent's (below). 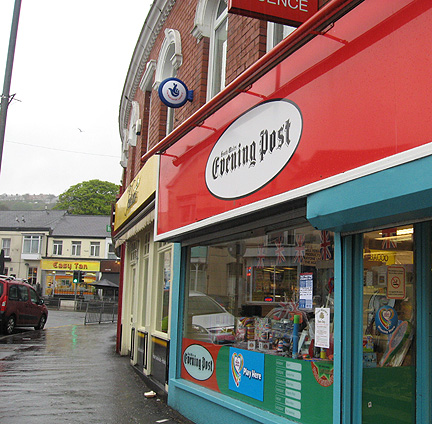 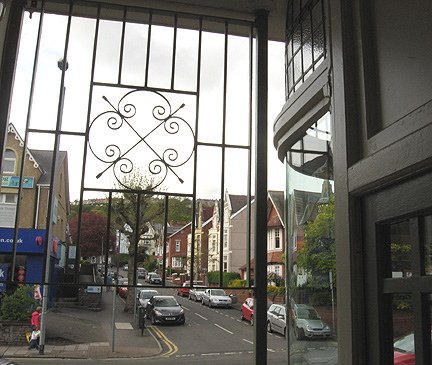 Above: the view toward Cwmdonkin Drive (Dylan's street) from the Gower Kitchen pub. Below: shops along Uplands Terrace. 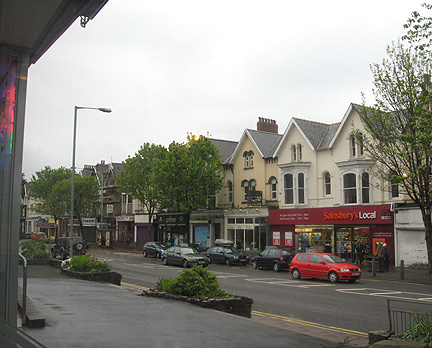 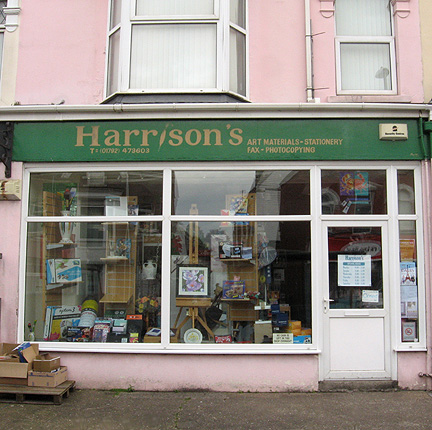 Harrison's of Swansea : best stationer in town, and the proprietors are as fabulous as the goods they sell. 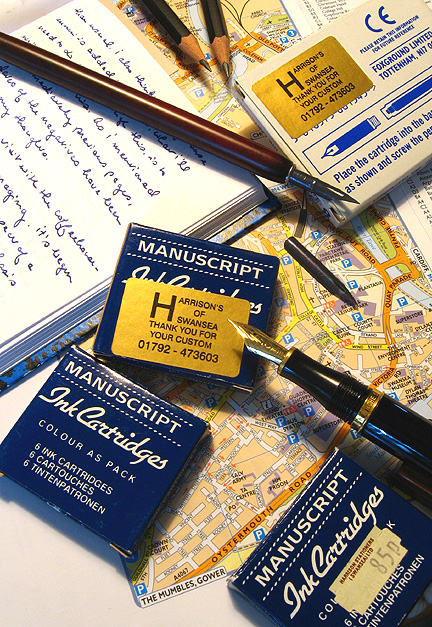 At the square which converges several roads are shops, eateries, and pubs- essentials which include bakeries, second-hand shops, a bookstore, a grocer, and Swansea’s best stationer: Harrison’s. One morning, after mailing letters into a slot in a stone wall, procuring bread at Davies, and cheese at Sainsbury’s, I stopped in at Harrison’s. The best errand saved for last was an enduring reward, as Mr Werrett the shopkeeper found a beautiful British-made unlined journal for me- which I purchased- along with a supply of rich blue-black ink, Derwent pencils, and Gillott pen points (all British made). In our very pleasant chat, we talked shop, comparing notes about the materials we use to practice our crafts. It was heartening to hear the Joseph Gillott company is still producing; I’ve been writing with their pen points since I first took up calligraphy when I was twelve. Mr. Werrett kindly packed the blank hardcovered journal well for my long journey back to Maine. We wished each other a good summer, and I climbed the curved streets back up to Dylan’s house. 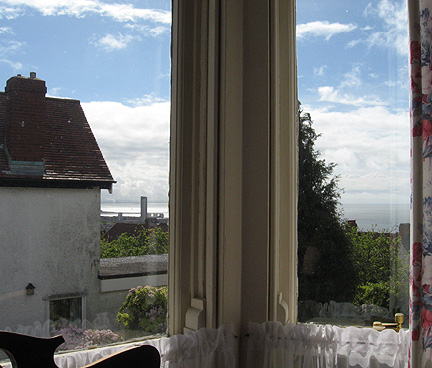 Re-outfitted to continue exploring and writing, breaks in the weather opened the ways for journeying to southwestern Wales. With Dylan’s house as a home-base, it was as enjoyable to be indoors as outdoors, and surely the spirited Good Companion was never far away.


Below: writing in Dylan's childhood room. 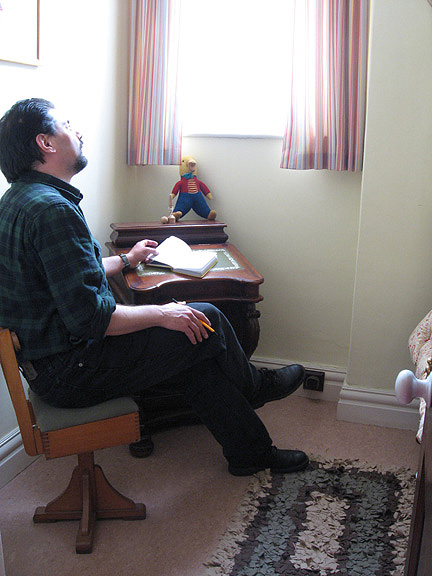 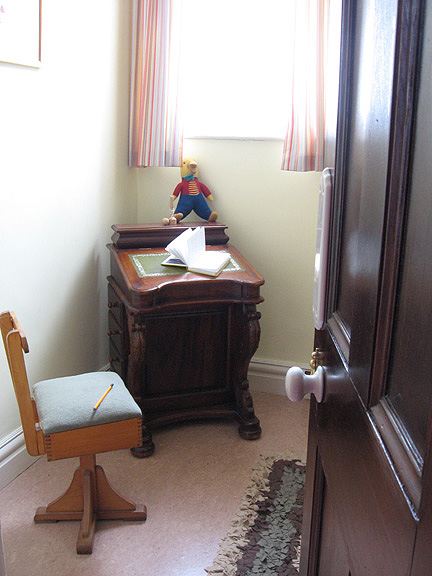 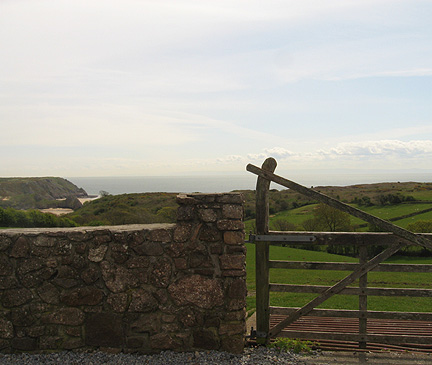 Posted by speculator at 2:28 PM

That was a wonderful read about a wonderful experience of a lifetime. Thank you for sharing that. What a joy to share such experiences through the words and pictures of others.

Simply magic, three cheers to Swansea by the sea !

What a magical experience indeed. It's wonderful to get a glimpse of the place and the time you spent there.

I will add the Good Companion to the list of writers and their typewriters on my site.

What a great experience. Thanks for sharing photos and detail. My wife is jealous that she can't walk into a local store and buy a high quality blue/black ink for her fountain pens. I'm in awe of the vibe of that place and that you got to use those writing tools.

Hi, Jon from the Dylan Thomas Boathouse in Laugharne here. Very much enjoyed your blog. We know Annie from Cwmdonkin very well. I've attached a link to your blog the Boathouse facebook page. Please LIKE!

What a marvelous old machine is that Good Companion! I was interested in how the carriage return lever is mounted, sticking straight up. A great experience to be able to type on it.

Once again a well crafted post. One of the things that impresses me, in addition to your writing and photography skills, is the amount of thought you put into each one. I see blogs where they must feel they have to post something each day. I much prefer your approach of quality over quantity, each one is worthy of investing the time to read and think about. Thank you!

Thanks so very much, everyone (and diolch yn fawr!)
So grateful that you are reading- and honored for the new readers from Wales.

Crofter: I doubt I could post much more than every 6-10 days. Not only due to my full-time work, but also that it takes a lot of time to create these essays. At times I can rate my satisfaction with an essay by my level of catharsis.

The time invested? It shows my friend, it shows.

Thank you for sharing your journey. It seems a wonderful place to visit and be able to spend time living in such a unique house. The typewriter is superb. The neighborhoods look very nice. I wonder what it would be like to live there if even for only a few months or weeks.

Thank you, Bill-
Wales and Maine have so much in common, it was very, very easy to make myself at home. It was also natural to compare Dylan Thomas with Henry Wadsworth Longfellow.
In all my conversational exchanges, it surely sounds like they're not having to plow through Maine winters.

Thanks for that - it was like being there. And its been a dream of mine to go to Swansea bc dylan thomas has been my fav since high school.

my favorite blog entry for the week for sure!