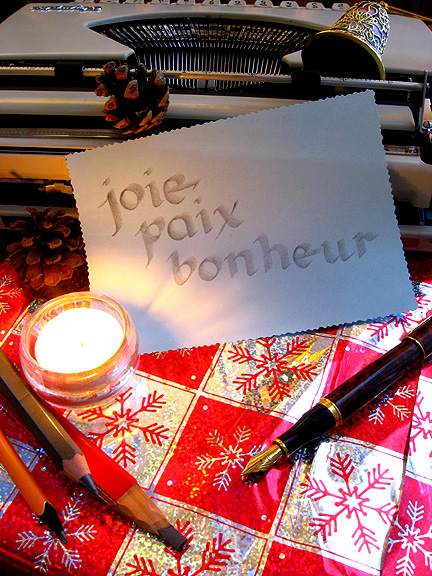 "All hail to the days that merit more praise
Than all the rest of the year,
And welcome the nights that double delights
As well for the poor and the peer!

Good fortune attend each merry man's friend
That doth but the best that he may,
Forgetting old wrongs with carols and songs
To drive the cold winter away." 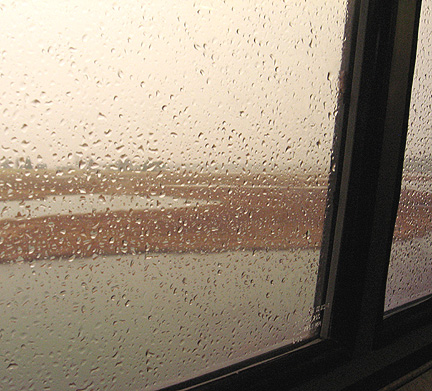 “True silence
is the rest of the mind;
it is to the spirit
what sleep is to the body,
nourishment and refreshment.”


Pulling away from Portland on a southbound track, the Boston-bound train picked up speed. My window view of trees and salt marshes began to blur and blend with the sky. Blurring and stirring in a swirl of sunrise light, form and color marbled into its own ephemeral texture. The journal writing I’d begun, before the train began rolling, was distracted along with my afterthoughts about previous weeks’ anxieties. Departing from the Sewall Street Station was the start of a retreat I’d anticipated for months. Such diverting landscape tableaux were gratefully received. The journey settled into a soothing overcast. In the buildup of worldly cares, economic trepidations, and general dead-ends visibility tangled into disproportion. With so many hopes sinking into swamps of thwart, I continue to try taking stock in the good that exists, while aching for the better of my wishes. When do my prospects improve, and will they ever? What do I await? My thoughts turned to the notion of continuing to hope for outcomes for which no evidence is detectable. A retreat is a chance to let the treadmills turn without me. The pursuit instead is for respite and hope. But patience is required to be able to unwind and rest. It takes time, though it is a worthwhile investment. Beginning to recover requires a slowing of paces. The gift of an entire week just starting, the train’s rhythm returned me to the present and toward the good fortune of a sojourn. 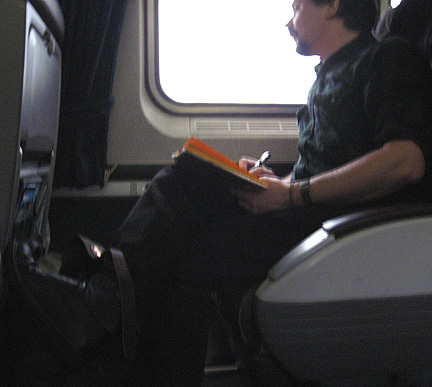 In between compound tasks and commitments, I managed to fit in my travel preparations. As the train-trip-eve drew closer, more ingredients were gathered at the floor near my desk. Snippets of late nights and early mornings permitted additions of writing, clothing, and photography provisions. Being able to see the accumulations, over several days, also permitted me to eliminate the extraneous from the essentials. There would be plenty of reading at my destinations, so I resisted loading-down with more than two small books. And the recurrent question of what I expected to do, prevented me from overpacking. Those who write and travel can attest to the discipline of balancing tools, trappings, and tastes when gathering gear. For such things, the priority goes to simplicity. 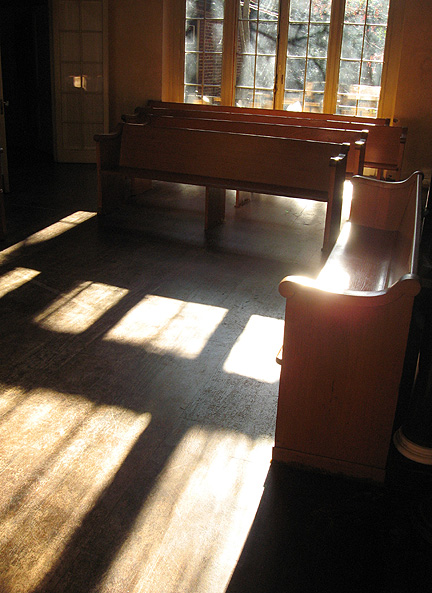 A journey into days of sanctified reflection implies pausing the pace, breathing in the immediate, and paring away inconsequential thoughts. Transcendent of setting, the place must simply be conducive to repose. All that is necessary is an open-ended freedom to be silent. For contemplative time to be what one might call “constructive,” there must be a slicing away of excesses. Unfettered, a soul may center down to its core, to the beyond within. In so doing, the reflexive grasp on external definitions is released. Even gripped retained experiences can be loosened away. I have learned, however, that one release is rarely sufficient; often a habit, or perspective, or an accumulation must be jettisoned many times before such things leave my thoughts. Simplification involves a clearing-away that is both physical and mental. Some material may be good enough to give away, otherwise it is best thrown out. Casting off and letting go may extend from such things as physical items- to ideas, concepts, expectations, connections, and even dreams. Though en route to meditative places, there were surely tastes of peaceful release as the train advanced. 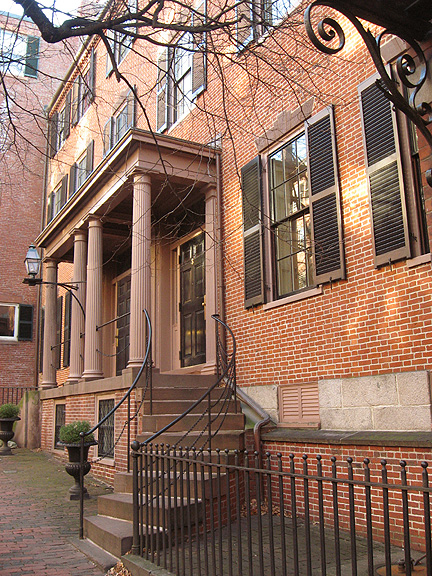 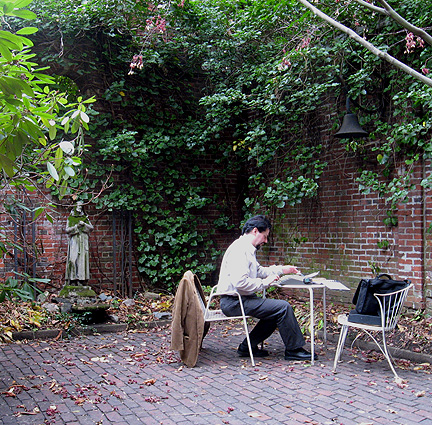 My aspirations toward simplicity were met by the ethos of my gracious host community for the week, at the Beacon Hill Friends House. Quakers have, for more than 350 years, founded their spiritual practice in emphases upon simplicity and patient perseverance. I’d spent a restful week at the House only six months ago. This time I experienced the courtyard in late-autumn, with shorter and colder days in the neighborhood. With time and increasing bonds of friendship, the welcomes are ever warmer and treasured- among communities at the House and at the Boston Athenaeum. Between the two places, I found rest, nourishment, great conversations, and time to write, read, and walk the ancient little peripheral streets. 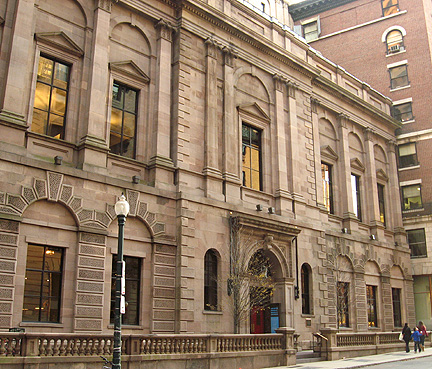 Above: Boston Athenaeum Library.
Below: View toward Charles Street, from Revere Street. 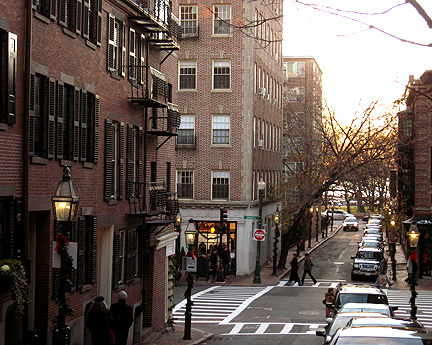 The literature I studied in the Athenaeum’s rare books room included treatises on grace and the companionship of the Holy Spirit, written by members of the Religious Society of Friends in the 1600s and 1700s. I saw much to enlighten my thoughts about anticipatory listening and awaiting- and eloquent simplicity. These writers had been persecuted for their belief in the direct relationship between God and the human individual, without intermediary or ritual. In silent expectancy is God received in the heart’s recesses. It is almost indescribable, yet the authors found their own ways to encourage their readers with testimonials and discoveries. Having time to read through such poetical discourse- after acclimating to the old style language- it occurred to me how it is a great gift to have time to read an item to completion without interruption. Much as it is to dine slowly on savory victuals, I could read and take notes- then go out for ruminative walks. Weaving the lanes on Beacon Hill, I asked myself about what I expect in life. My unreasonable tendency is to expect better, regardless of apparent limitation. How much time constitutes too long a wait? Surely an aspiring kind of anticipation is quite unlike ways we wait in traffic, or in queues, or in waiting rooms. The wait for God is not in vain. 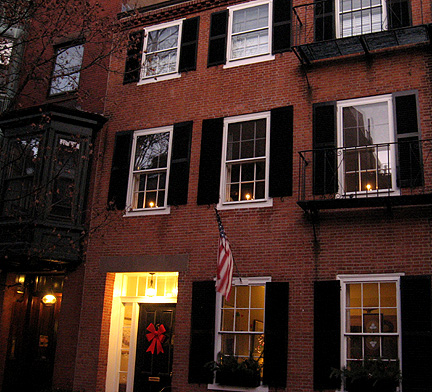 The season of Advent is one of glowing and expectant waiting. As the darkness of daylight’s diminution progresses, so conversely do hope’s embers intensify. Early-arriving evenings provide contrast for small, bright Advent lights displayed in windows. I began to notice them, along my afternoon walks. Guiding stars keeping vigil remind those in transit of the transient darkness. We wait not in vain. Having the opportunity to view a simpler expression of the upcoming holidays, Advent emerges as a season of hopeful expectation that anticipates fulfillment. As with the austere worship of the Quakers, the Holy Spirit is both evident and imminent, which is to say close at hand. Parakletos translates as consoler, comforter, the at-one’s-side, and the summoner to freedom as expressed in the gospels. 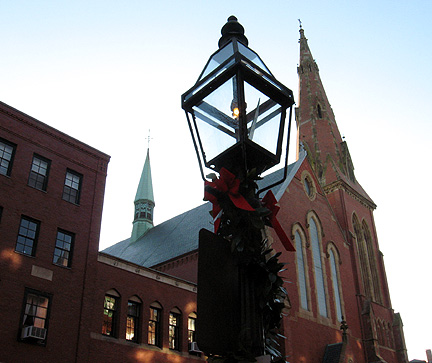 The Church of the Advent, Beacon Hill. 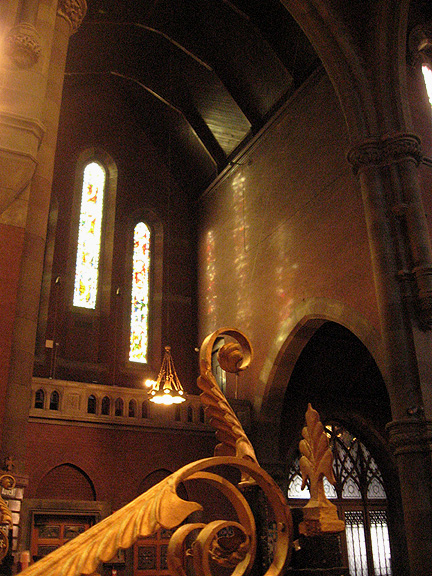 To silently await attentively upon the Creator Spiritus- as part of a large congregation- is as substantial as it is mystery. Somehow, in a perfectly congruent serendipity, first thing each morning I participated in morning vigil at The Church of the Advent- just a few minutes’ walk from the Friends House. Reciting the Psalms aloud from a lectern, toward the echoing heights of the large and elegant sanctuary, was an experience of spoken prayer in ancient footsteps yet with my own voice: No less extemporaneously, from row-house to cathedral, the Spirit moves. And just as seamlessly, the places and experiences of a week blended together as they settled within for the train trip home. Imagery of winding gaslit lanes, places of prayer, bright faces, ancient books, church cats at The Advent, and my chilled outdoor-writing hands filled my closed-eyed thoughts as the Downeaster rolled north. Rather than to look for any great resolve from this retreat, my hope is simply to do justice to these treasured experiences. For me, this means being faithful to the hopeful signs I have met and seen. 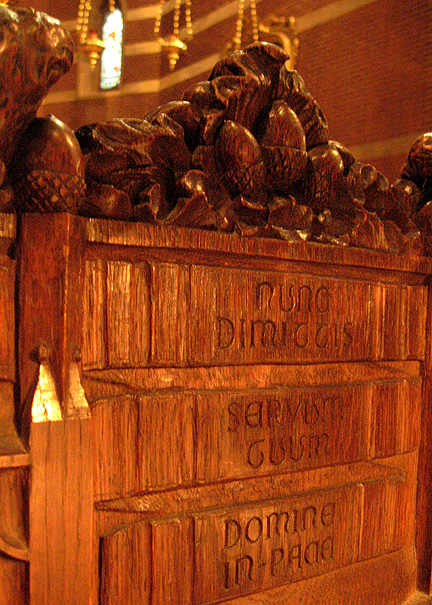 The lectern I read from daily at The Church of the Advent.
The motto translates as:
"Lord, let Your servant go forth in peace,
according to Your Word." 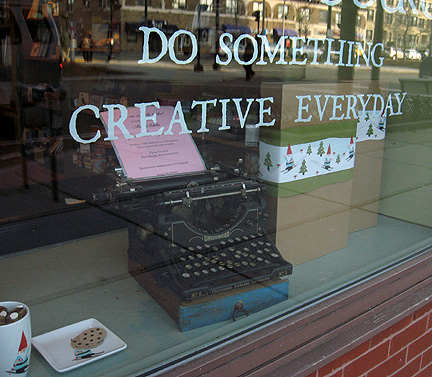