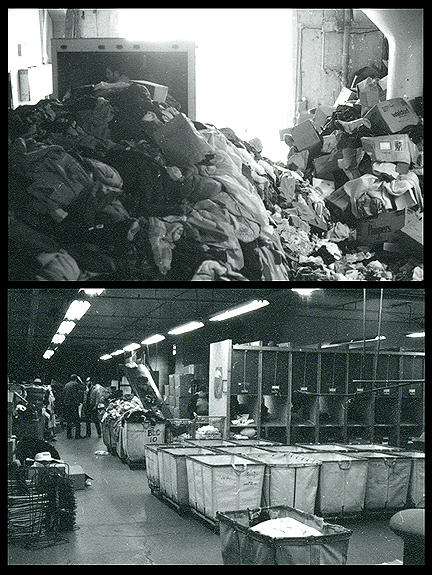 ~ Michael Been, You Run.

As the general and historic commemoration of Labor Day is a recognition of workers and organized labor, the occasion can certainly have its personal connotations. For practical purposes, and in my personal history, Labor Day has been something of a new year’s day for me. The holiday coincides with the start of the academic year, the closing days of summer, and both have combined in heralding new ventures. I began my self-supporting life at 17 years old, moving to Portland, Maine from New York City- enrolling at Maine College of Art. I came to refer to Labor Day Weekend as Arrival Weekend. As a member of the labor force, that began at age 14 for me. Through high school, I worked in inner-city New York grocery stores, stocking shelves and delivering purchases. I continued working a variety of jobs in Portland, various other parts of Maine and Boston, in an odyssey continuing to this day. The venues have included factories, offices, stores, warehouses, commercial darkrooms, studios, colleges, museums, and libraries. Indeed, Shakespeare was quite right: all the world really is a stage, populated with characters that make their exits and entrances. There have been many places, people, and dramas for my memory and journal-writing. Plenty of recurring types through these different scenarios, as well as some remarkable originals. 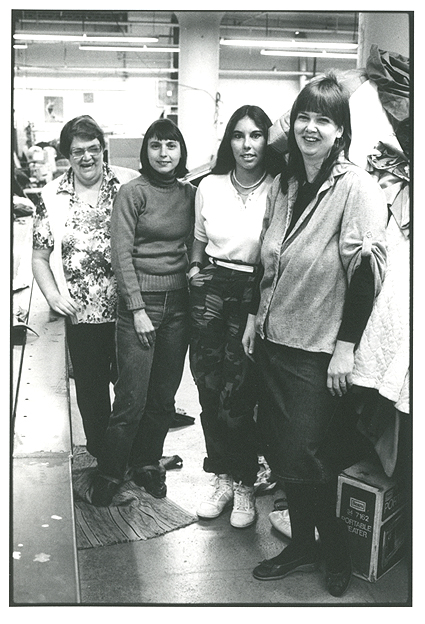 Through this summer, I’ve been digitizing whole portfolios of my photographic prints- working all the way back through the work I’d done in art college. Many, many, many images. This project has to be done systematically and in measures, otherwise it’s as daunting as the large archival collections I’ve organized over the years for my various employers. Apparently, as artists choose to preserve and document their output, we wind up becoming our own curators. Being a professional archivist, I automatically want to know what I have, where it is, when it was made, and how it’s stored and retrieved. There’s actually some interior humor in this. 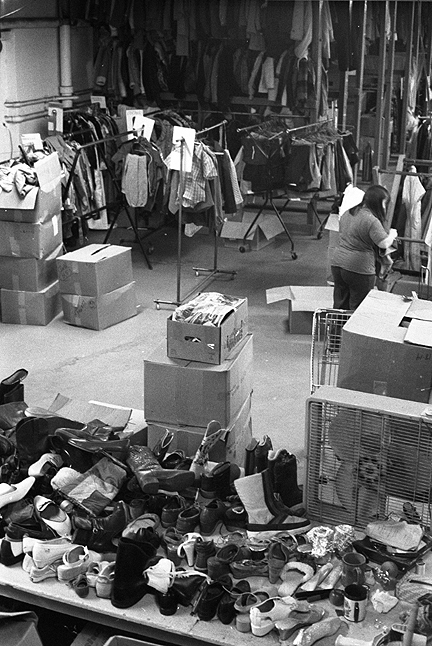 During the summer between my sophomore and junior years in college, I transitioned from part-time to full-time work, at a local hardware company job that went from bad to worse. There was nothing good about that job, but I needed the paycheck. During my breaks, I used a parking lot pay phone to cold-call potential leads. Answering an ad from the local Goodwill, I was interviewed and was offered the job. My new supervisors were sympathetically apologetic about the minimum wage, but there was something I liked about them, and I gladly took the pay cut- and the chance to get away from the bullying hardware people. 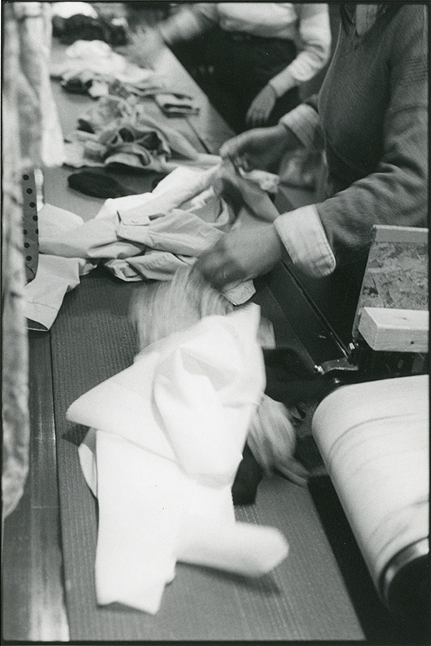 My work assignment at Goodwill of Maine was to work in what they called textile processing. This meant working in an unclimatized, antiquated, repurposed warehouse- sorting piles and piles of donations on conveyor belts, moving massive amounts of material to their designated locations, operating an industrial rag-baler, and assisting where needed. At that time, I was 20 and fascinated by the whole operation, the extent of what people were donating to Goodwill, and the colorful cast of characters around me. Some of the workers were called staff, and others were known as clients. That meant I worked shoulder-to-shoulder with co-workers with various developmental disabilities. We all worked together, chatted together, and learned from each other. Very occasionally, when there were behavioral problems, I was deeply impressed by the supervisors’ patience, their calm tones, and abilities to coordinate all of us. 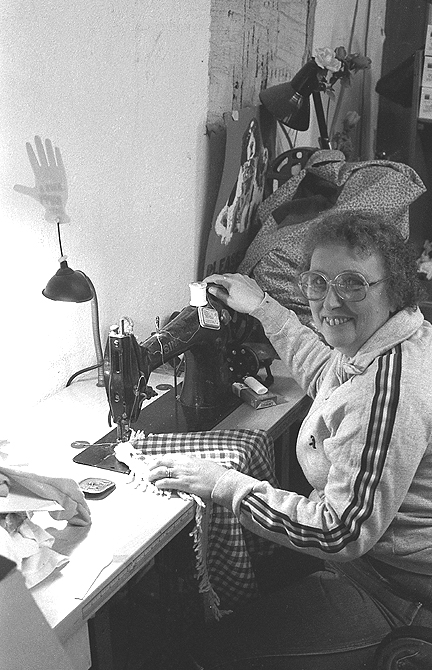 As the summer concluded, I needed to reduce my hours to correspond with my school schedule. Goodwill was so happy with me, they gave me a part-time assignment as the bookkeeper at the attached Goodwill store, on Cumberland Avenue. Even after classes began, I’d stop into the warehouse to visit my many friends. Co-laborers are not quite like schoolmates, though in both situations we are brought together by necessity. Those we work with at our jobs are much more diverse, and with time we cultivate our own shared “battle stories,” which are distinct from isolated school memories. An assignment from my photography class was to create a reportage of a place that would be easy to return to, so that images could be revisited and refined. Classmates chose topics such as landscapes and architecture. I chose the Goodwill of Maine processing warehouse. My co-workers were very comfortable around me by then, even with my camera. They knew I was an art student, and that I was a friend. Recently, while scanning the photos- made in the 1980s- all the names, sounds, and procedures came back to me. Preserved photographs rekindle impressions, outlasting physical locations which change or disappear. Goodwill is long out of that location, and the building was divided and renovated. My photographs now serve as a documentation of a society of workers accomplishing their tasks, in the midst of a small city.

Truckloads from collection points were dropped off on the Portland Street side, to the loading dock and The Pit (at right and below): 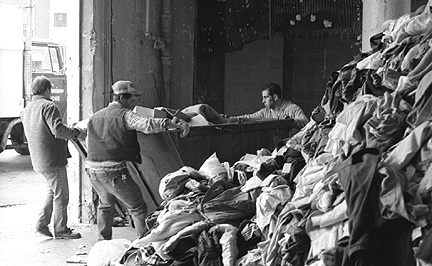 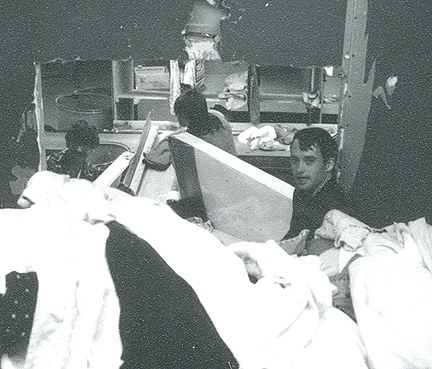 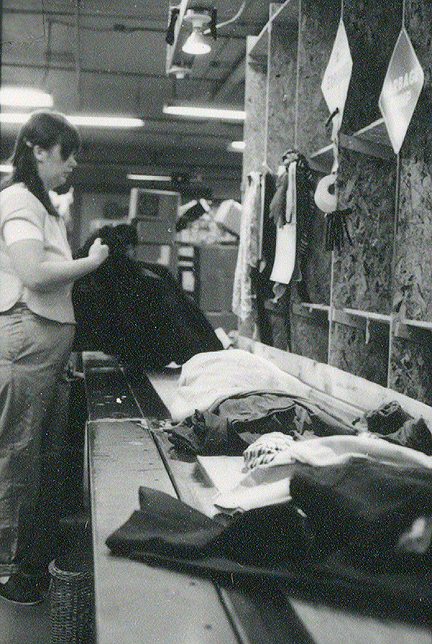 From The Pit, and down a chute, clothing (separated from hard goods) were sorted on conveyor belts. Material in good condition was sorted into various bins. Rejects were left on the conveyor and baled for recycling. 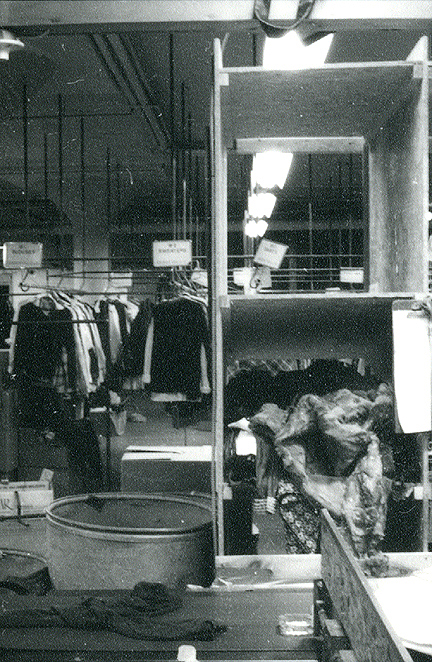 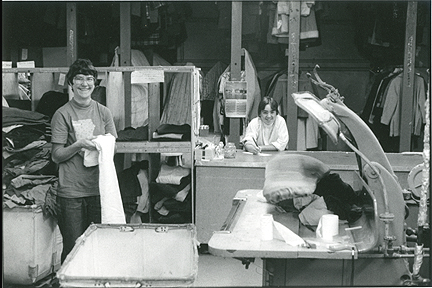 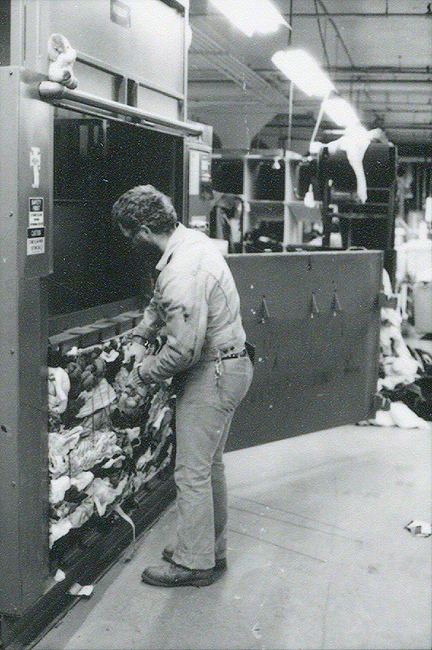 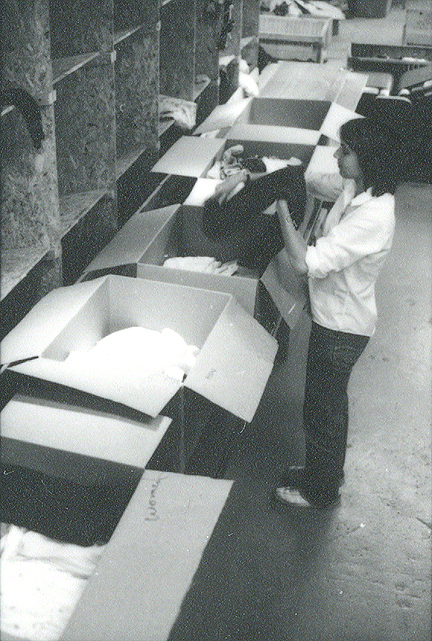 Above: Packing boxes for routing to Goodwill retail stores.

Below: Desk with location codes. 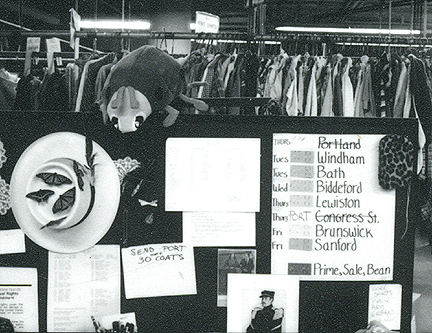 Some of my co-workers: 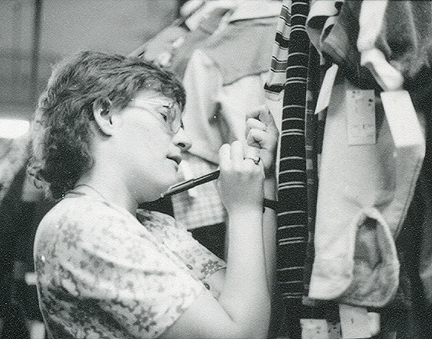 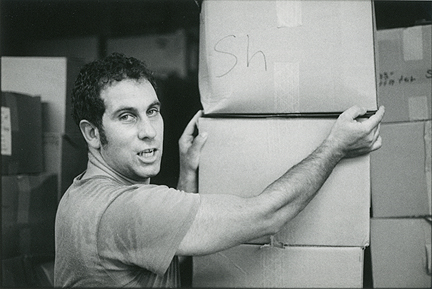 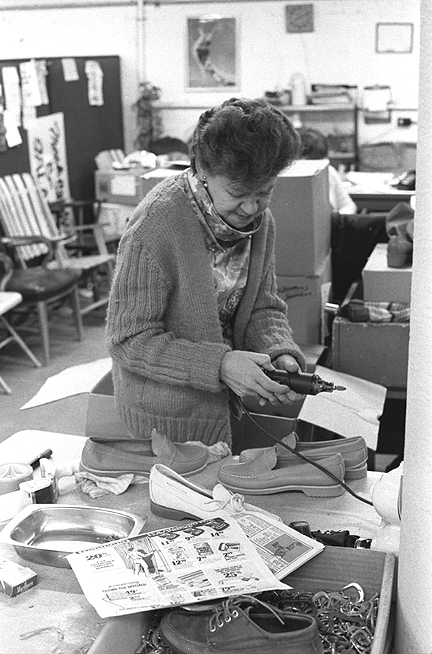 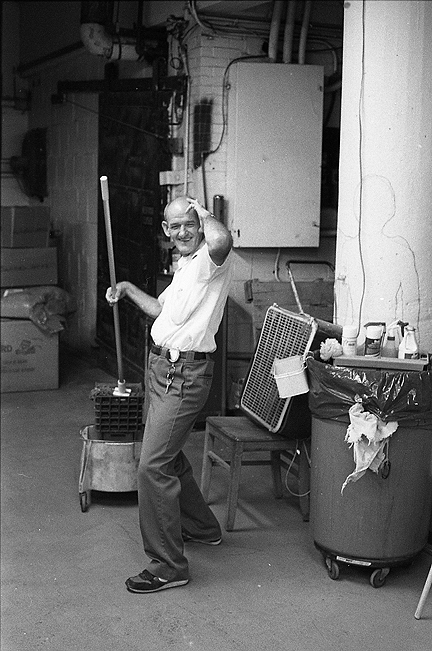 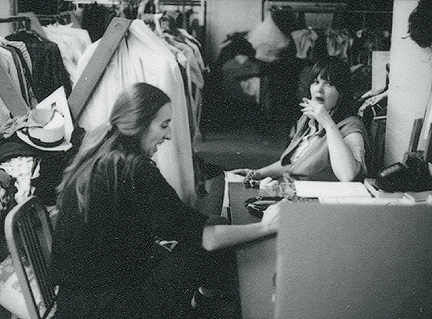 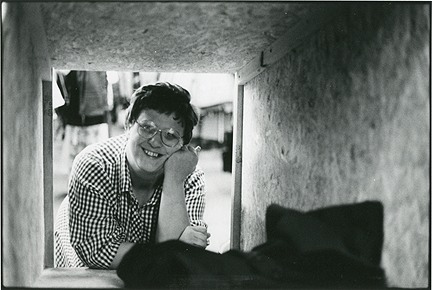 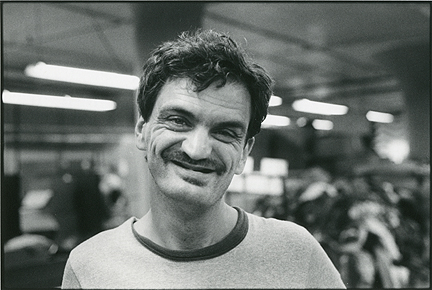 Below: My co-workers enjoying the photos I took of them. I gave them my proof-prints, thanking them for being such good sports. 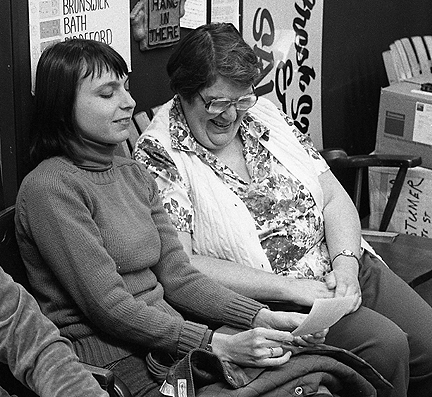 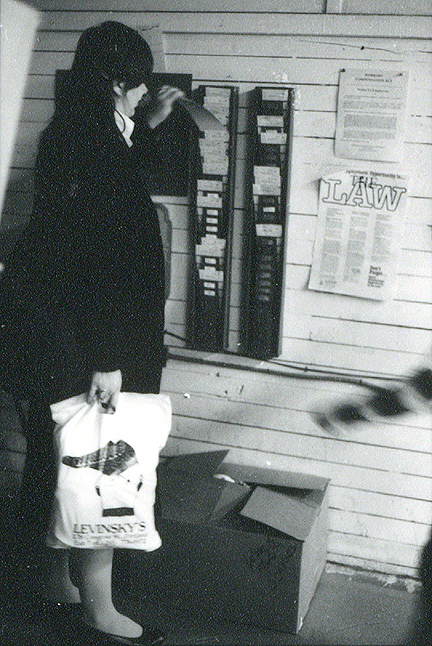 Below: Goodwill, on Cumberland Avenue, along with the loading dock on Portland Street. 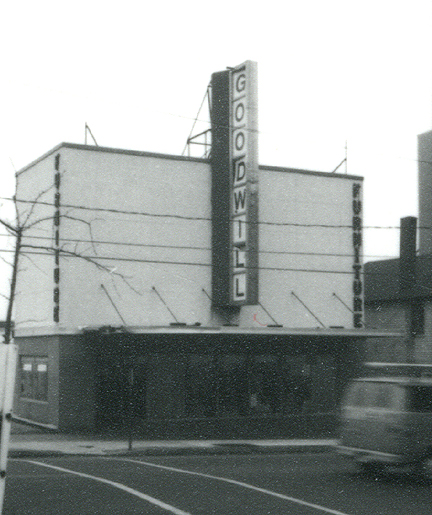 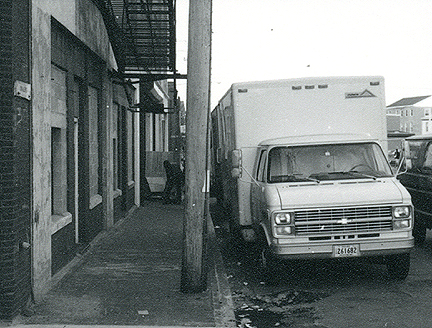 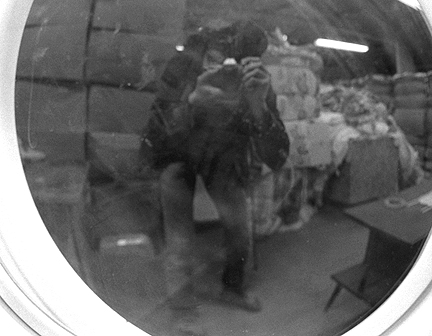 The author and photographer, at age 19. 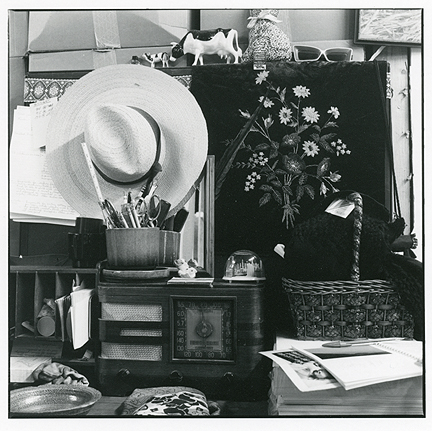 My supervisor's desk, decorated with salvage.