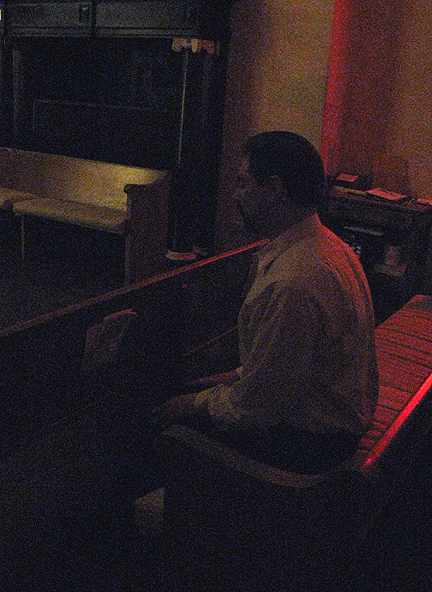 “The eternal fount its source has never show’d,
But well I know wherein is its abode,
Although ‘tis night.

Yes, in a life so sad and dark as this,
By faith I know the wellspring of bliss.
Although ‘tis night.”

~ San Juan de la Cruz,
Song of the Soul That Rejoices to Know God by Faith.

It would be a conflict of definitions to say that vigilance takes a vacation. The nature of perseverance is the very ceaselessness that distinguishes keeping vigil, from passive waiting. Keeping watch becomes something of a default state of being for anyone in a constant state of anticipation, over a long span of years. Corresponding with crises and desires, watchfulness intensifies. Expectancy manifesting with embedded, abiding embers is not hypervigilant. The latter is a disruptive form of anxiety, subversive to balancing thoughts. As for the former, watchfulness is a longing for transcendence. It is an awareness of past and presence, with an alertness for improvement, for ascendance. Watchfulness tends naturally toward impatience, and must be tempered creatively and constructively. But theory and practice are threads that do not always entwine. 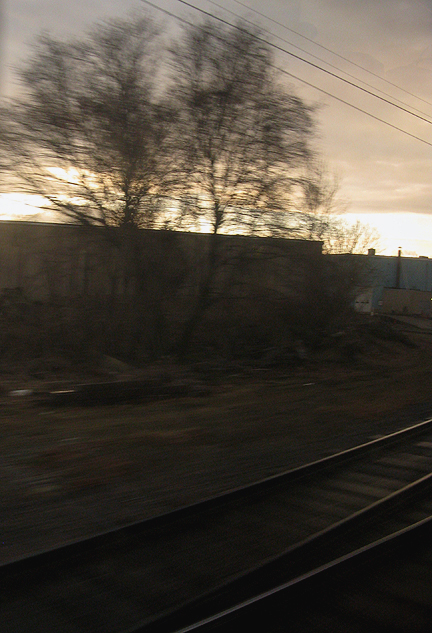 Watchfulness takes many forms, and has reasons as specific as an individual life. For many, it is the animal-like alertness to avert danger. Our instincts show themselves. Just the other day, I stopped my errands to look after an injured cat in front of a store. Incredulous that neither pedestrians nor shop workers would intercede, I made the shelter phone calls, and stayed with the troubled cat until help arrived. Trying to console and to keep a watchful eye on a distressed animal, I remembered my childhood’s vulnerable years on mean inner-city streets. Watchfulness takes shape as the insomniac’s procession moves through such nighttime stations of the cross as windows, kitchens, inanimate desks, and darkened corridors. It’s tuning for hospitable radio broadcasts, trying to pull something hopeful out of the air, from unknown distances. It’s the drive toward an invisible goal, by way of an unsatisfactory status quo. It’s the via dolorosa of web sites in an impersonal and threadbare job market. It’s the persistent anticipation of mercy, while standing on the ashes of forsakenness. As with the cat’s plaintiveness on the dismissive sidewalk, my petitions seek watchful and helpful eyes- and those of Divine providence. Parallel to the incredulity of unrequitedness is the insistence upon purpose. The two are tied together by dignity. By purpose, the intention is to redeem the present: to take stock of what is useful and to find significance in the immediate- while fully expecting fruition. Seedlings beneath the forest floors must think such thoughts. Watchfulness is surely a means; it is not the goal. 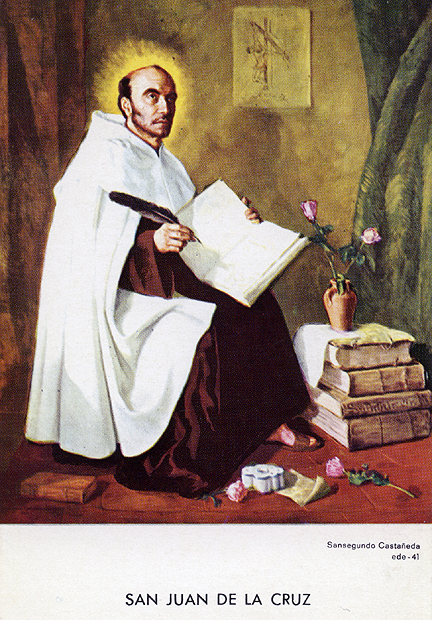 It is known that San Juan de la Cruz penned the ideas of some of his canticles and themes, while incarcerated in a cramped dungeon. He had not committed any crime, but was perceived as an enemy of anti-reformist churchmen in Spain. It was expected that he would die of the deprivation, torture, and starvation inflicted upon him. Juan seemed to be fueled by a transcendent sense of purpose. He managed to beg for a piece of paper, which he folded into a tiny booklet for his sketched thoughts. With every possible moment, he picked away at the lock of his cell; this may have gone on for months. In his emaciated state, he skillfully broke out of the dungeon and escaped to safety. Among the inspired ideas he scratched on the piece of paper were those leading to The Living Flame of Love. This mystical prayer begins with tenderly you wound my soul’s deepest center, reconciling at once anguish and salvation. He concluded with this stanza:

How gently and lovingly you wake in my heart, where in secret you dwell alone; and in your sweet breathing, filled with good and glory, how tenderly you swell my heart with love.

Together with his larger works, The Ascent of Mount Carmel, and Dark Night of the Soul, San Juan de la Cruz exemplified steadfast faith in the face of desolation. He implored his readers to continue the ascent, amidst perceived stagnation. In the poem, Song of the Soul That Rejoices to Know God by Faith, his refrain following his expressions of aspiration amidst abandonment is “although it is night.” He was sure of his belief, of his Source, even though he was plunged into obscurity. He remained more pronouncedly assured, the more he noticed reasons not to be assured. Studying biographical works about San Juan gives me increasingly greater appreciation of his poetry and philosophy. For him, watchfulness is readiness and openness to the stirrings of the Holy Spirit. In the gospel, to be watchful is to take heed to yourselves, lest at any time your hearts be weighed down with consumption and the problems of this life, as well as the consistent followthrough that we watch therefore, and pray always, that we may continue worthy of our calling. San Juan instructed his readers to see light in the night, despite the perceived and convincing darkness in our days. 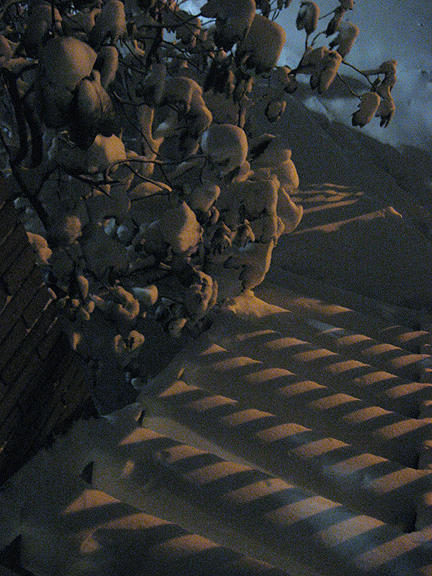 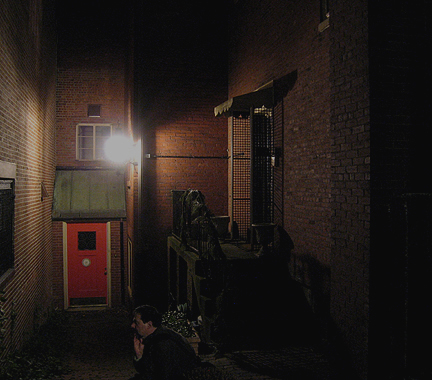 Our perceptions can play tricks on us, and traversing the night of sense confronts gauntlets that threaten to deceive the faithful. Keeping watch becomes a delicate balance between real and assumed limitations. Yet another needed balance is that which blends spartan discipline with a sensitivity that discerns when to let up on the throttle. Is a less-aggressive vigilance a healthful form of surrender? Perhaps only experience will tell. 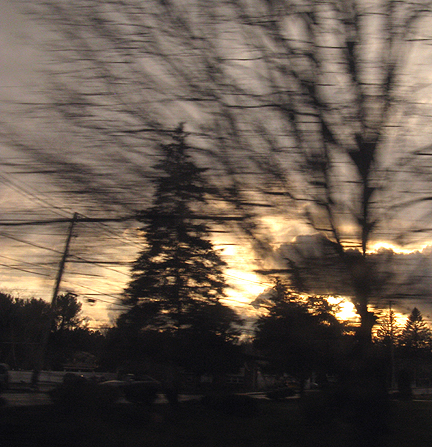 In that fine art of patient recollection is the wisdom of reaching out to mentors and friends. As I am a trusted ally to many, I know that my closest kindred spirits reciprocate by intending the best for me. An elder friend who is close to retirement provides plenty of welcome encouragement. When we have time to catch up, she tells me to “look for a miracle” in a very affirmative voice. Indeed, I do this- hastening the discovery with all the vigilant ingenuity possible, thinking of that unflappable San Juan de la Cruz. After all, when you’ve been given a message, that inspiration must go forth. As the pray without ceasing of St. Paul is watchful vigilance, then it must be a rotation of physical progress and interior contemplation. San Juan was wrestling with the lock and chains, while making the most of his one piece of writing paper. Watchfulness, alas, needs its own checks and balances: Care must be taken so that vigilance does not upstage savouring what is good. While hungrily and constantly watching online for opportunities and developments, it’s important to remember they do not change on a minute-by-minute basis (certainly not in the pre-dawn hours). Such things operate at excruciating tempi, and there is little more one can do beyond conscientiously trying and keeping faith. There are many rejections, because there are many attempts, and these amount to many teachable moments. Wondering about why, and how, and when seems only to plague any good progress. Inhabiting San Juan’s purgative night of sense teaches a surrender of the what-ifs. If anything, the better musing is to consider potential improvements and what direction may be noticed among the elements. 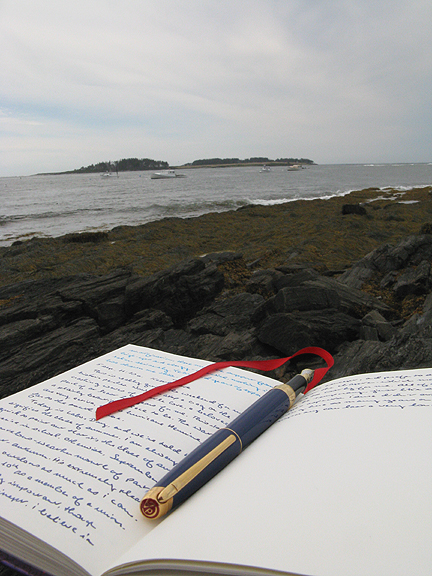 In the second section of The Ascent of Mount Carmel, San Juan de la Cruz wrote, “The less the soul works with its own ability, the more securely it journeys, because it journeys more in faith.” Speaking as a calligrapher, there is something to be said about the steadiest line paradoxically drawn with a slightly loosened grip. San Juan is advocating against over-calculation, even if it means navigating through darkness. His expression of disciplined faith is that of resolve amidst unresolve; head-knowledge must be refined as heart-knowledge. 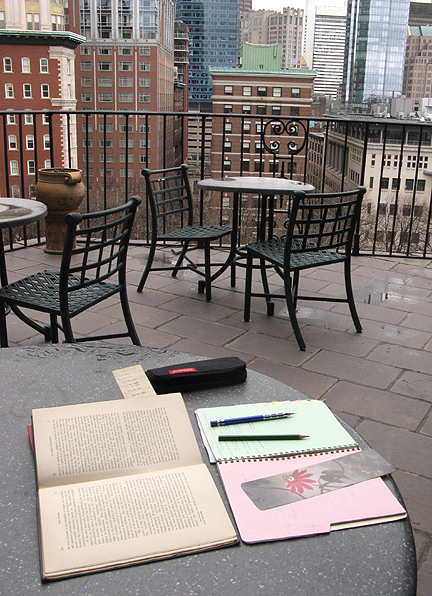 Exemplary as it is, his life is one among those which could be fermented only through life-threatening trials. A crucible is defined by its very indefiniteness. It’s in not knowing the extent of an ordeal, or what endurance requires. But that very instability becomes a place of uneasy residence, hoping tenuous conditions are temporary, amidst the proactivity of striving. For the example of San Juan, the foraging is by a spirit of trust. Strength of trust is bolstered by cultivated preparedness. A very strong spirit is needed to engage the battle for sustenance and improvement. Within this strength, it is vital to be as lucid and discerning as possible. Equally critical is the life-force of inspiration. There must be such ready resources as good reading, access to natural light and fresh air, alongside vigorously reflective creative practices. Study is a form of watchfulness, and for me it is an enjoyable exercise that helps redeem the time and expand my sights. All the while, I stretch and watch for better times, open doors, and fewer limitations, insisting that I do not wait in vain. In the Easter vigil is a model of expectant hope, of watching for the liberating moment. It is also a pattern for the anticipatory life that proceeds in a one-way pilgrimage of trust for which vigilance becomes subconscious. 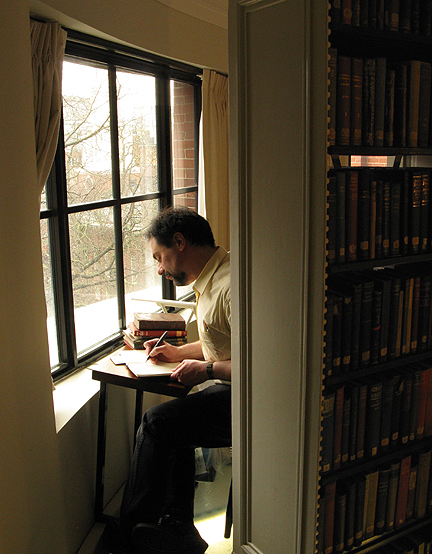