rolling, the road rolls relentlessly on 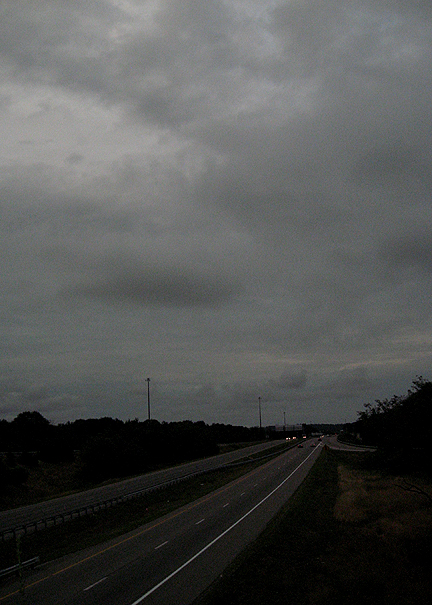 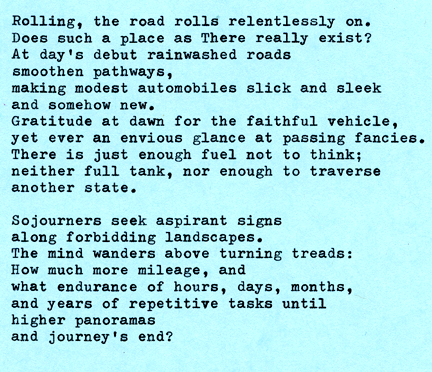 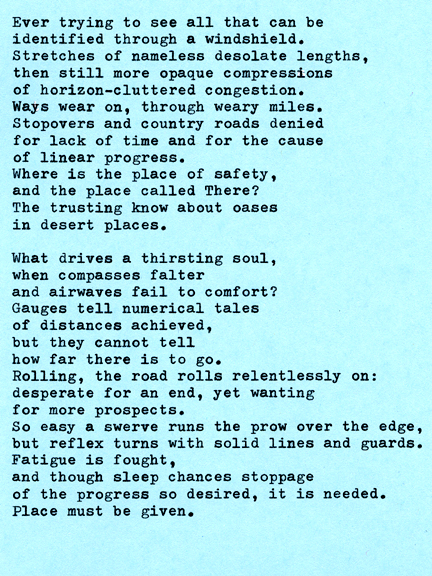 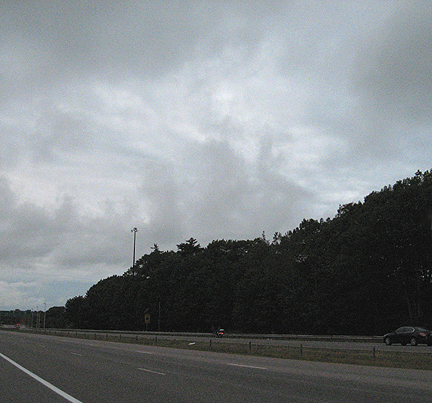 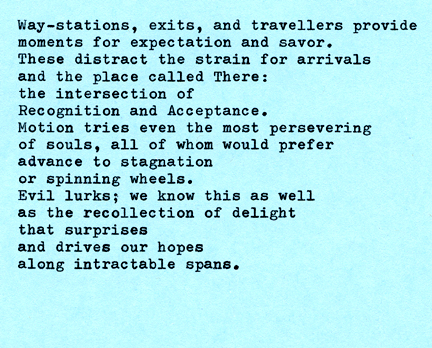 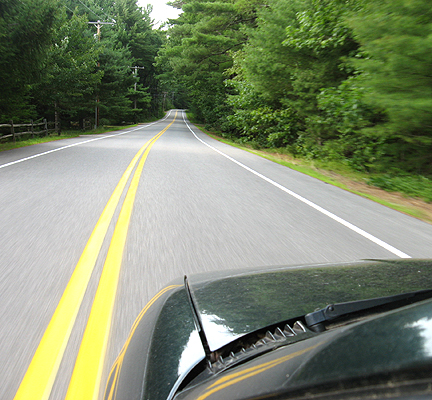 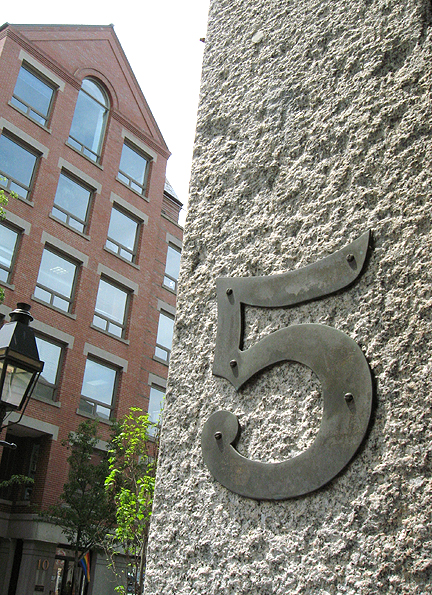 "I'm a little pencil in the hand of a writing God,
who is sending a love letter to the world." 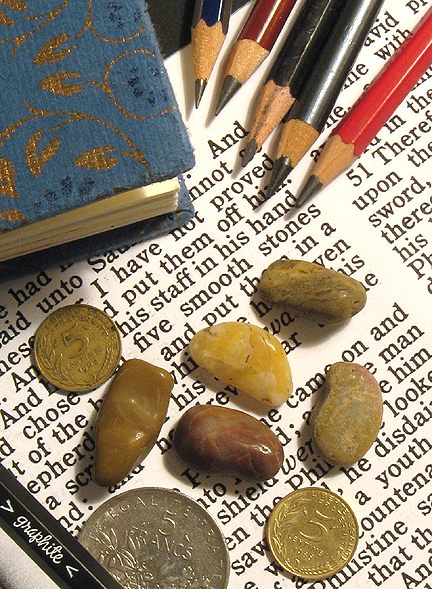 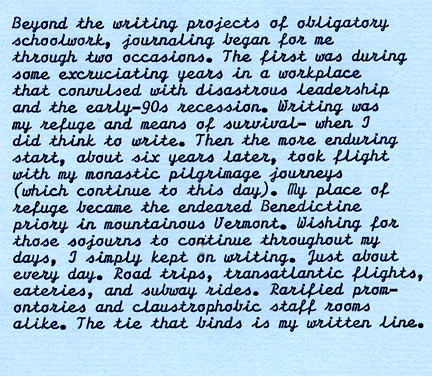 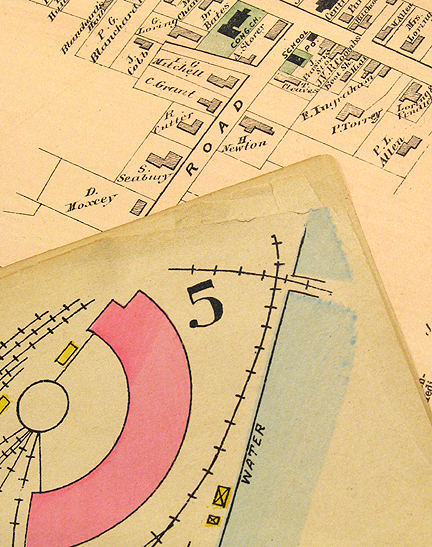 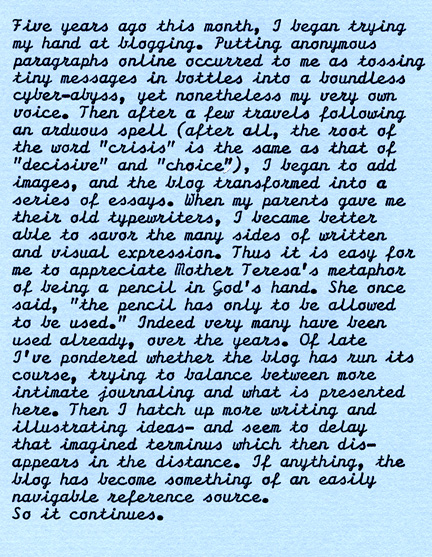 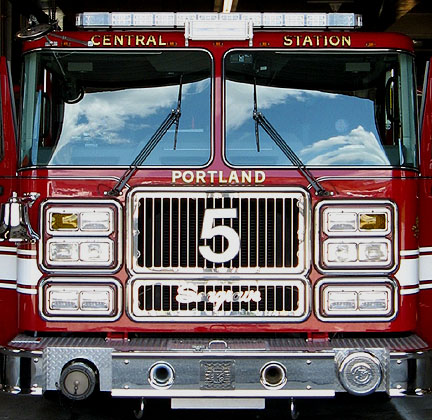 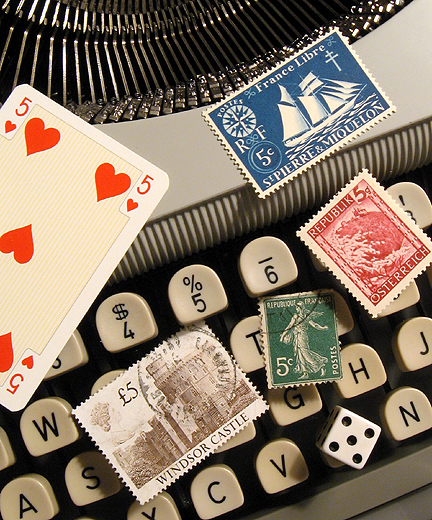 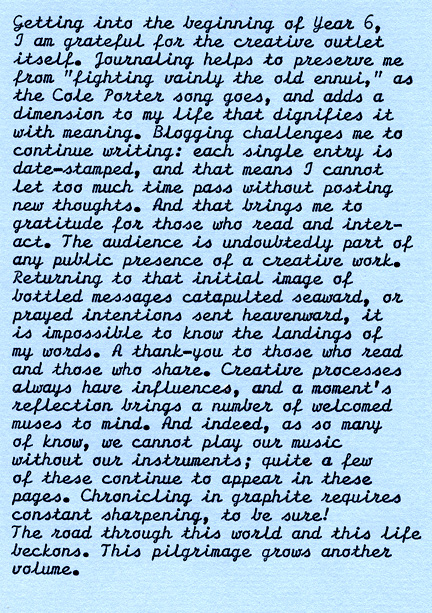 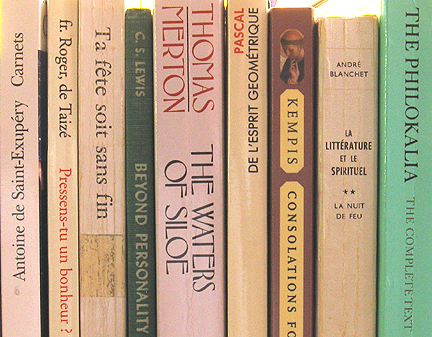 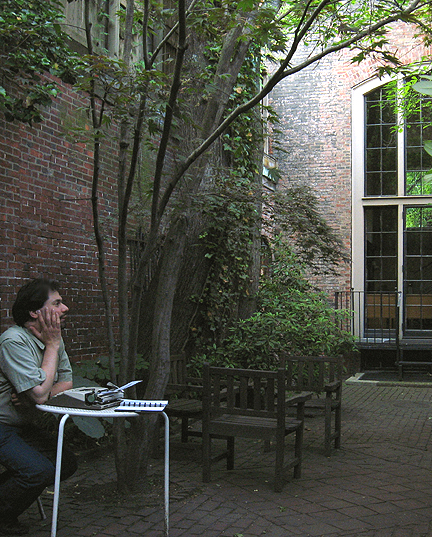 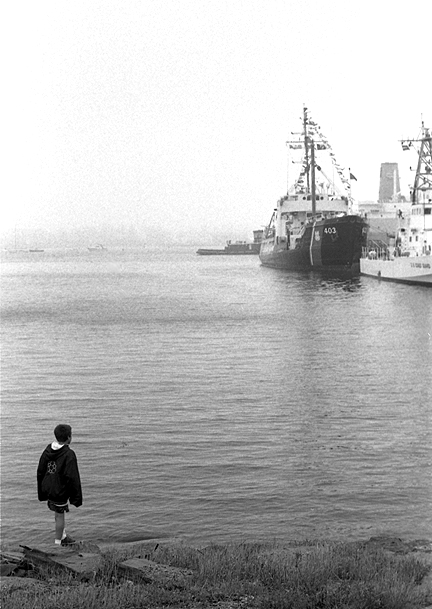 “Loneliness is bred of a mind that has grown earthbound.
For the spirit has its homeland,
which is the realm of the meaning of things.”

~ Antoine de Saint-Exupéry, The Wisdom of the Sands, ch. 79.


Every once in a while, I drive along the street of my residence when I was eighteen. I’d rented a room in a small apartment house, after my freshman year in art college, and wound up staying in that living situation for a year- being nearly broke. Since that year, my home has been in the West End of downtown Portland. While parts of the city have gone through major changes, the Rosemont area remains very much as it looked in the 1980s. It was one of my life-crossroads, and those occasional traversals of Woodford Street rarely fail to bring back such references. We all have these: pivotal places as playing fields for pivotal times in a life that is far more complex than it is simple. Occasionally, my paths will glance alongside the campuses which had been forums for my learning, practica, and teaching. These places of development all remain quite recognizable, albeit immersed in time’s air currents, with corresponding successions of souls passing through.


Sites trigger thoughts, transporting our spirits through time, and for us the buildings and streets are suddenly repopulated. But the seeker is the only one that sees depth. And advancing away from reminiscence requires a collocation of meaning from beneath surface. Indeed, I’ve learned the necessity of setting aside habitations in which there is no recognizably relevant life. Sharpness of memory is a two-edged sword. Vivid accuracy can haunt. It begins with musing about personal progress and potential, then memory lanes wind into wondering about missed chances and wrong turns. Tree-lined streets and tidy buildings recede into dark woods as the mulling melts into grousing about unsuccessful efforts, missed opportunities, and bad decisions. Wasted time, unrequited relationships, misbegotten employment, and fears of being out of chances can cloud and divert reality. Am I just a low-rent version of my best aspirations? As with a fine instrument, the wielding of memory must be refined so that the historic positively informs lit paths. A sense of present context identifies the good that is. Turns taken are inevitably less tormenting than wrong ones- or better ones; these are the trails we chose at our crossroads. What might’ve been becomes what we’ve been spared.


From composing replays that could never be staged, my attention is distracted by the living, breathing immediate. The intact wonderer is the spared. I’ll trust that what should have been wasn’t so great after all. This follows some seeking of logic for why things are as present- the madness to the method, the reason for the rhyme. With Pascal, “I see no reason why I should be here and not there, now and not then,” yet have a sneaking conviction that I will yet see a grander and more purposeful view. Perhaps I’ve been spared of plans that fell through, and my absences and failures may have spared others of my self! Then there are the more tangible sparings. During one of many bicycled crossings of New York’s 59th Street Bridge, I had been so nearly grazed by a large truck that a sharp gust of air tilted my balance. When I got to my destination in Manhattan, I said that an angel must have flattened itself into a thin shield. There are countless near-miss experiences to recall from the distant and recent pasts alike. There are the instances in which we know we’ve been spared, but we’ll never know what unmanifested dangers hadn’t reached us.


Between why things hadn’t been and what did materialize, I must inevitably accept a large measure of unknowing. And such acceptance provides the place to set this bewilderment free. Mystery isn’t something to simply tolerate, one must thrive with its possession. “How is this so,” and “why is this so,” becomes this is so, and with that there is life to be tasted and seen. The urgency of the immediate upstages focusing upon what might have been. The latter, whether near or distant past, cannot be known. Questions about how and why must evolve into is statements. Rather than to discouragingly resign to not knowing inner workings, hoping to have altered paths long past, consider that a soul can flourish in accepting things that are, at least as a basis. Today would not be possible if not for what is, even after all the preceding wrong turns. What did not materialize is bygone and long since out of reach. Thus, what clearly is may truly be for some definitive purpose. 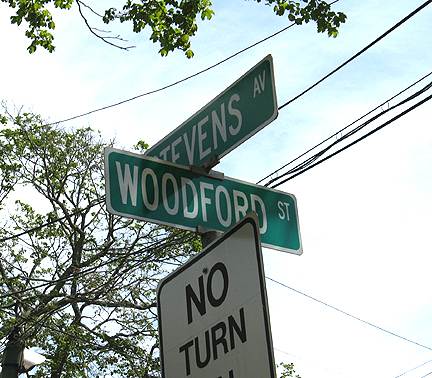 In his Enchiridion, Erasmus suggested that we make our present state our chief motivating factor. I can accept that I’ve been spared from circumstances of which I’ll never know. At the same time I must also be convinced of the prospect of being preserved for summits as yet unseen. There is little reason, however, to expect that my tendency will go away that coaxes what won’t sway to my persistence. Being informed and perceptive means identifying which doors to keep trying to open and which ones to simply appreciate from the outside. Human ambition desires the brass rings that will compensate for the missed attempts. From whence come obstacles that conceal our fortunes? Yet it is an unknown measure of good fortune- of providence- to accept having been spared. As this comes to mind, I think of being cared for in excess of my assumptions. An awareness of grace encourages me to look forward. Being attuned to promise awakens me to the immediate, effectively diverting any backward brooding.


This past weekend, I parked near some personal crossroads, deciding to do some walking instead of windshield-musing. A better idea. Just as thoughts can exhume and enshrine, conscious consideration can bury with full civilian honors. And even after the phantoms are ushered away, there remains a knowledge of meaning beneath the surfaces of streets, buildings, and establishments. Perception blended with remembrance does not torment, but is a dignifying blessing. All has purpose and potential to contribute depth to living. In The Wisdom of the Sands, Saint-Exupéry wrote, “Nothing have you to hope for if yours is the misfortune of being blind to that light which emanates not from things but from the meaning of things.” Indeed, it serves us well to make sense and peace with our days and adventures. We become our own discerning historians and archivists. Though we are our own best-qualified rememberers, some light treading is needed to keep things accurate and in context. Inevitably the immediate is sufficient. Of course there is plenty of room for improvement. But living implies an openness to people I will meet who will describe things as yet unknown to me- perhaps providing a key I would not have otherwise found. Such gains represent treasures along the way, advancing from thoughts of what I missed (or what may have missed me). So long as one lives, summations are incomplete at best; the reach of significance still incalculable. 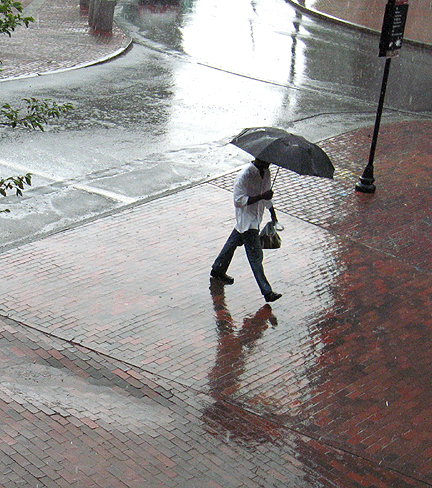 Posted by speculator at 9:30 AM No comments: