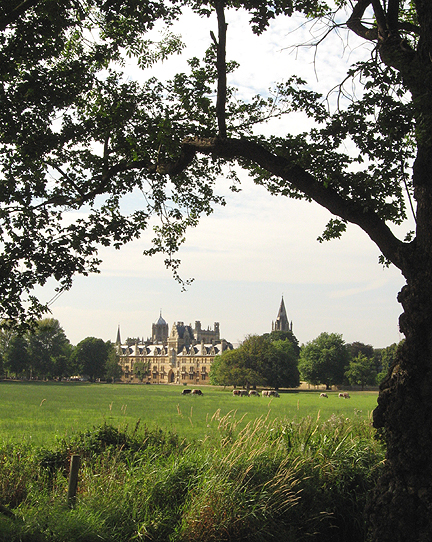 “I am a wanderer:
I remember well one journey,
how I feared the track was missed,
So long the city I desired to reach lay hid;
when suddenly its spires afar
Flashed through the circling clouds;
you may conceive my transport.
Soon the vapors closed again,
But I had seen the city, and one such glance
No darkness could obscure.” 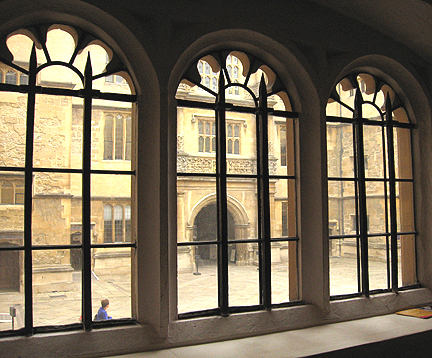 As the mild weather returns, drawing a long winter to its conclusion, I am drawing my afterthoughts together from my time at Oxford. This is my tenth theme essay in reflection of this profound life experience. Previous essays have described portions of my adventures as a C. S. Lewis Scholar-in-Residence, living at The Kilns, studying at the University, immersing in Lewis’ archives, and absorbing the ambience of the city. My steps covered many, many miles of streets, paths, steep tower stairs, tunnels, and alleys, meeting literary footprints from across centuries. In any place with a deep and ancient past, strata that meet the light of today are merely atop countless layers of the steps of others. This impression was especially felt as I traversed stone slab steps that sag at their centers. Such pavers, stairs, and cathedral aisles seemed weighted and rounded by the passages of time. Indeed I have made contributions of my own, especially across Radcliffe Square, the Bodleian Quad, and Saint Giles Street. But now, looking back, the time since has subsumed even the most sublime episodes into memory. 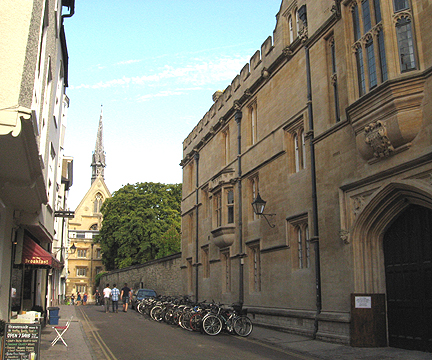 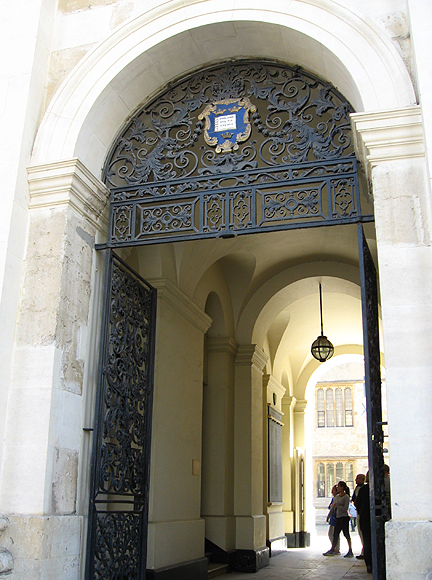 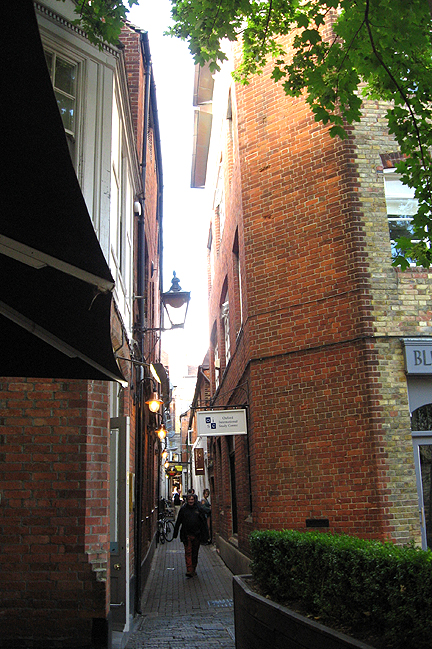 With Browning’s Paracelsus, I can say that I had seen the city, and one such glance no darkness could obscure. There is much to continue cherishing, having lived and studied in a place of such academic depth and historicity. The experience continues to live within; Oxford goes with me now. My recollections join my collected artifacts and pictures. Musing about places and material objects, as I revisit the many, many photographs I’ve made there, the locations and events become artifacts themselves. Photographs serve as a form of iconography. The libraries and museums, filled with brilliant and life-giving resources, are enshrined in my memory as composite treasures alongside the cafes, pubs, and streets. 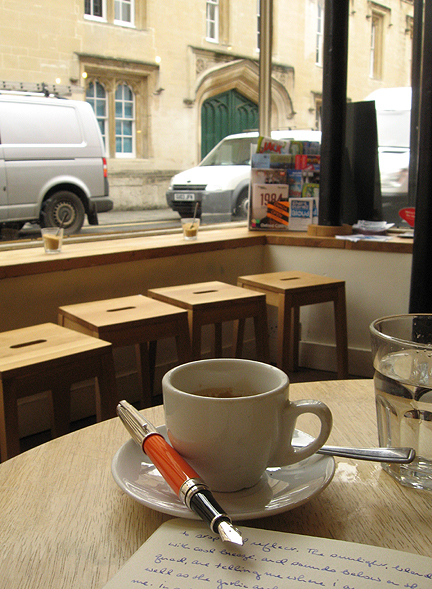 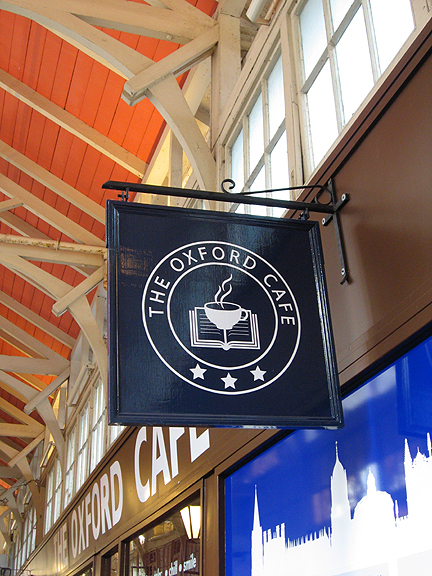 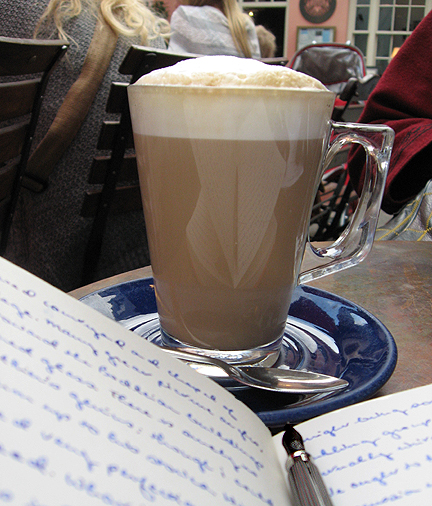 Places are always inclusive of their contents and activities. My previous nine essays have described The Kilns, the University and its libraries, and some related landmarks in detail. But the in-between places are the passages that provide context and roots to the landmarks. My guess is that your favorite sites are treasured in your thoughts at least partly due to where they are. Places and their physical situations are inextricable: the monastery on the mountaintop, the café along the tiny cobbled street, the reading room in the elegant library, the seashore along the craggy coast, the plant within good soil, learning in harvests of ideas. 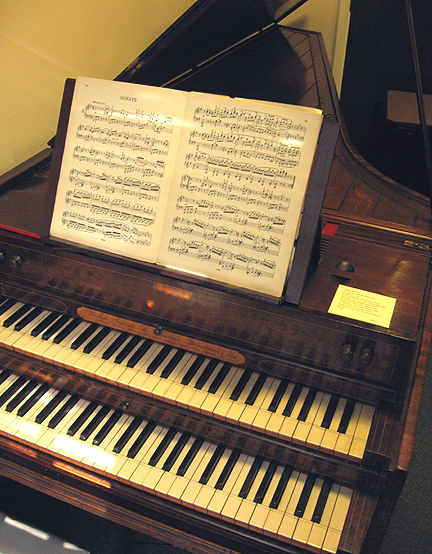 Above: Haydn's harpsichord.
Below: Einstein's blackboard 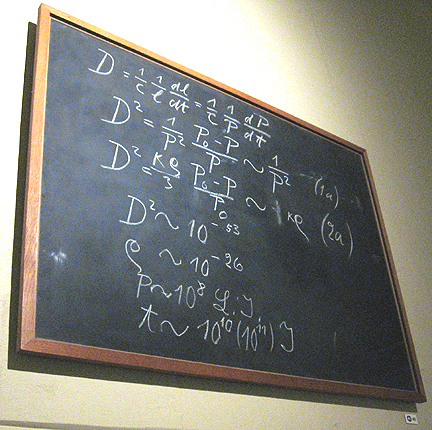 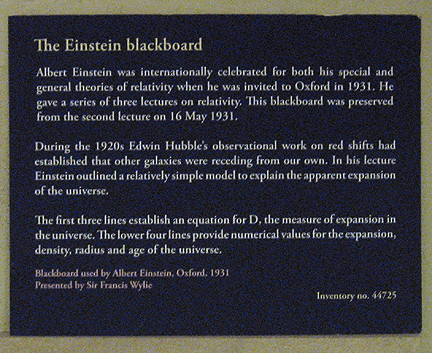 Oxford’s Bate Museum presents historic collections of musical instruments. Included in their interpretive displays are short recordings of the respective instruments’ sounds. The curator proudly described how the museum pieces are actually used in concert recitals. Playing the instruments is part of how they are preserved. The displays are configured to show the evolvement of such instruments as violins, flutes, clarinets, trumpets, pianos, among many others. The museum provides context for these musical artifacts. Because of my daily experience, and the environments through which I travelled, I saw a similar collocation of humanity in the cafés, shops, and reading rooms. Context can broadly encompass populations, structures, and regions- yet indeed context may also be intimately defined. Oxford preserves Albert Einstein’s blackboard, in the University’s science museum. An artifact, from one context to another. Much, much more humbly, yet still more intimately to me, I now treasure my used call slips from the inner sancta of the Bodleian Library, and among many other ephemeral things, my well-used pencil stubs from all my note-taking. 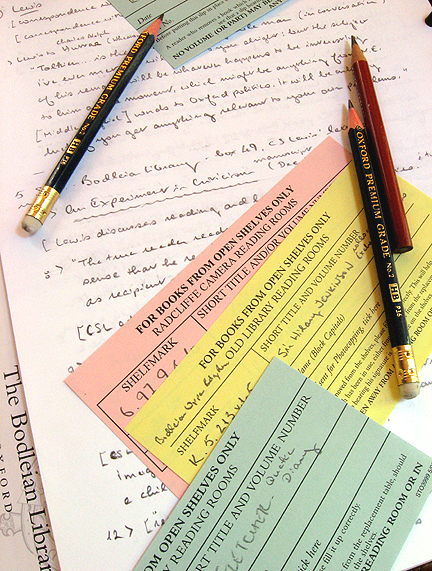 Spans of time, at any length or brevity, also become treasured places. Both physical and spiritual landmarks are capable of recalling time. Therefore, moments join locations as our inner geographies deepen and increase. Of Oxford, I gratefully recall sun-filled courtyards, and the contrasts between the yellow-reddish stone and bright green lawns. A tea shop near the Bodleian quad has grape vines growing in its back garden; I enjoyed writing near these. On many early mornings, with long stretches of study ahead, I would stock up on chocolate bars, on my way to Radcliffe- either at the Covered Market or the Tuck Shop. The newsagents got used to me, with my expressions of gratitude in what must have seemed a funny overseas accent. At the Market, the man would say, “It’s a good day, and now you’re ready!” 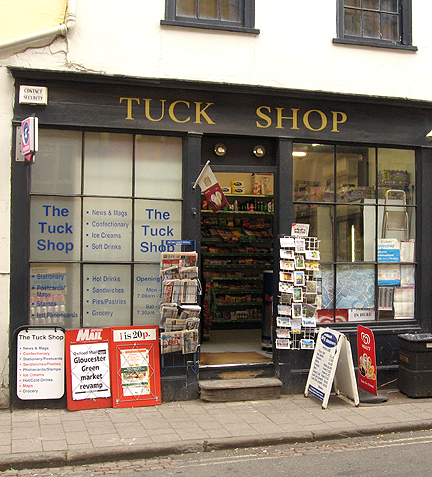 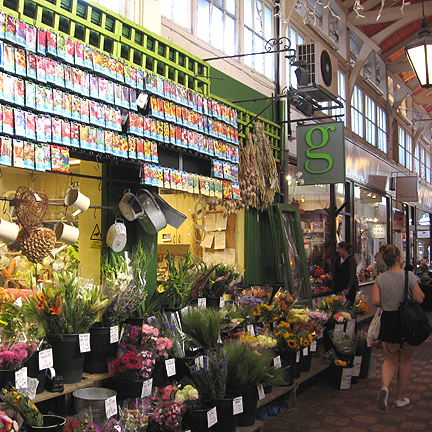 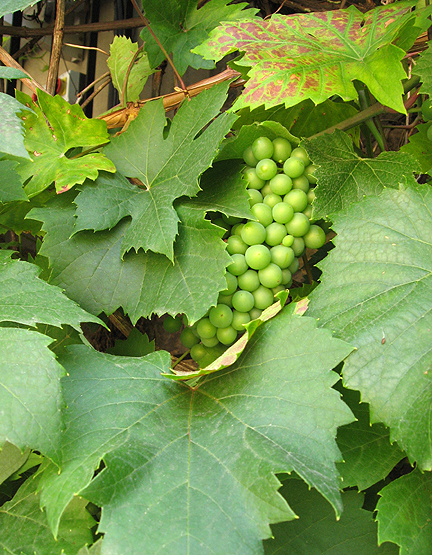 I was recipient of many gifts in the shapes of moments provided by wonderful people. Between many generous conversations with the warden of The Kilns, the Bodleian staff, and a variety of professors and students, I had the honor of meeting Aidan Mackey. Mr. Mackey is a retired teacher and bookseller as well as the world’s foremost authority on the life and works of G. K. Chesterton. We enjoyed two evenings together, during which we exchanged ideas and observations about literature and the works of Lewis and Chesterton. On one of these occasions, Mackey read some of his own work, as well as Chesterton’s to me, in the parlor of The Kilns. What I remember best was his recitation of Chesterton’s mystical epic The Ballad of the White Horse- entirely by heart- pronouncing the words as though the unseen book was speaking through him. An enduring moment of a gift. 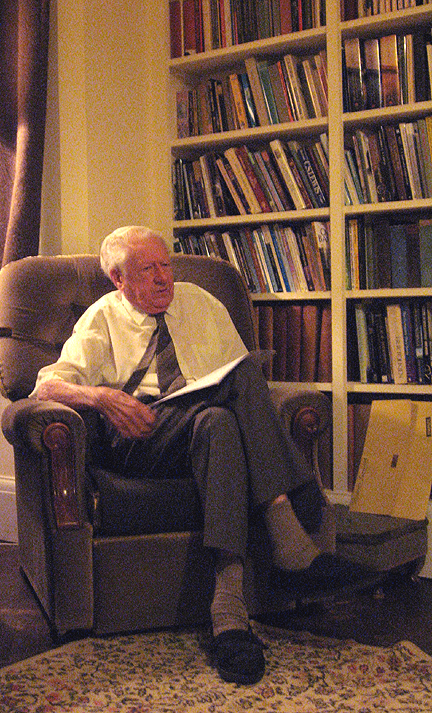 Above: Aidan Mackey reads G. K. Chesterton, in the parlor at The Kilns.


"May Their Memory be Blessed."
Placing seashells from Maine on the memorial for the expulsion of the Jewish people from England, near Magdalen College, Oxford. 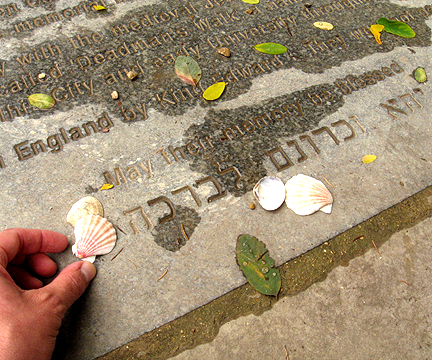 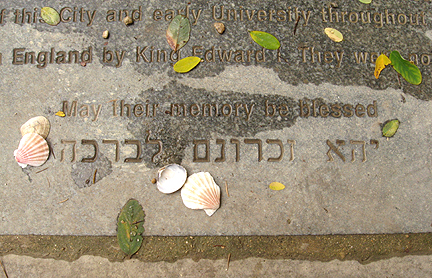 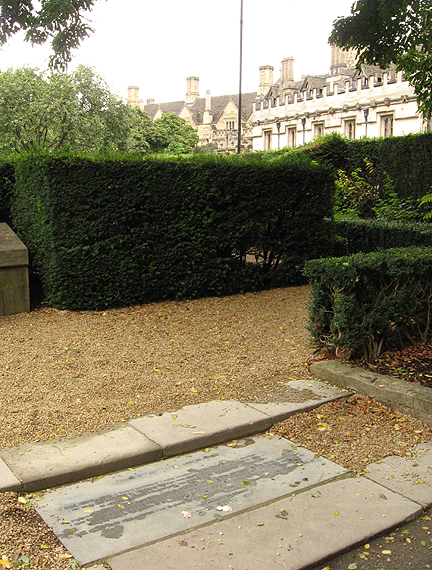 During one of many pleasant chats with the superintendent of the Special Collections reading room, I mentioned my ongoing project of studying Quaker journals and essays at the Boston Athenaeum. He encouraged me to explore Oxford’s collections on this topic, which are located in Duke Humfrey’s Reading Room. Through these additional studies, I opened a 300 year old volume with a sweet surprise staring up at me: the English Quaker Benjamin Holme’s An Epistle to Friends and Tender-minded People in America. The Quaker apostle addresses the Colonial Americans to “be encouraged, whoever you are,” and hold fast to faith that speaks of “God’s merciful Visitation, which is extended to your Souls.” And here I am, three centuries later, visiting his book with my new Oxford lapel pin, positioned next to the one I wore with me from the University of Southern Maine, marveling at how time can cross its own mysteriously meandering paths. Indeed, my mind’s “reading voice” is of this time, the same one that gleefully expressed gratitude for those Cadbury chocolate bars from across town. 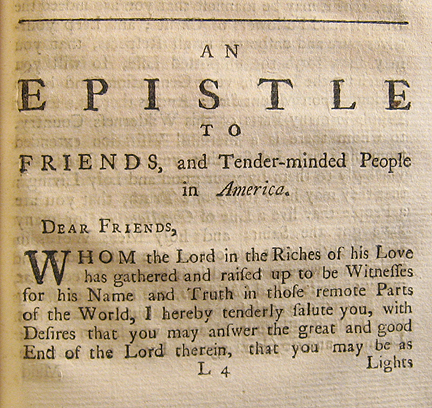 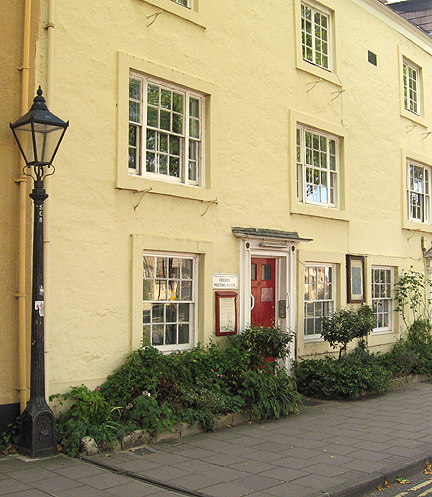 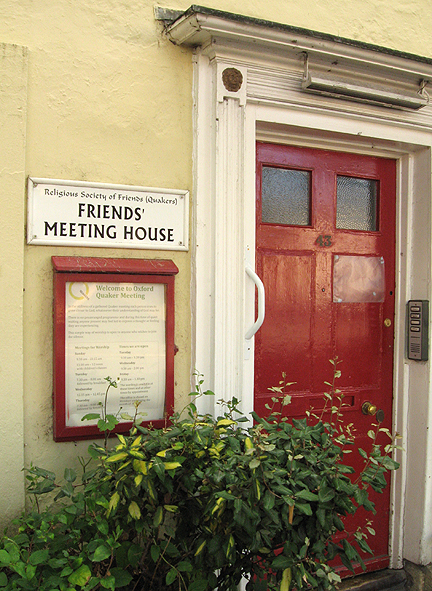 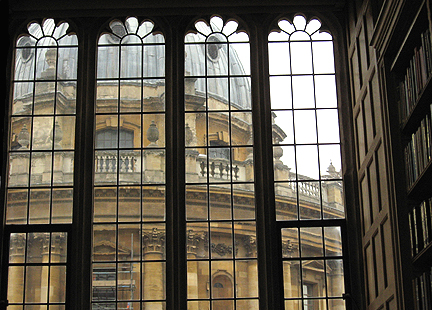 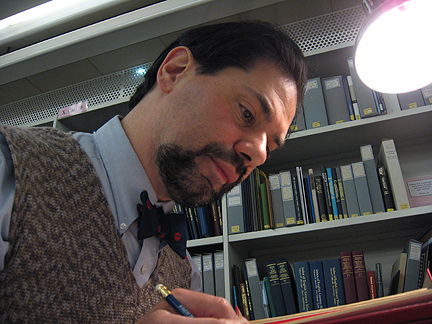 At last, we come to the setting-forth from this place and time of learning. I certainly hope to return before too long, but that will be yet another, different adventure. Here the postscript begins with the obvious, noticeable to those who have read all ten of these essays, and that is gratitude. Now in retrospect, I see the ideas gathered during my time at Oxford as an abiding postscriptum. Surely there are the material treasures and photo images that attest to the experience, and are held close. But equally tangible, standing alongside study notes, portions of discussions, and written observations in journals, are ideas. By ideas, in this sense, I refer to ways of perceiving. Firstly, there is there is the inspiring prospect that a willing learner will never run out of sources. Heartfelt seekers will find, and I am merely one example. Vastness may be viewed as intimidating, but when it comes to oceans of knowledge and insight there is assurance in knowing the elements are deep and wide and rich. Consider the last sentence in Saint John’s gospel, as he concluded his account of his life experience with Christ. Of all things, he wrote:


“there are also many other things which Jesus did, which if they could be written every one, I suppose that even the world itself could not contain the books that should be written. Amen.”

To which I am brought to add, not even all the Bodleian Libraries, plus everything in Boston combined! In this continuum of learning, as I begin to transcribe and index my reams of notes from these studies, I’ve also begun to notice changes in my perception. Beyond some techniques derived from the archives and conservation areas that I’ve brought to my work, there are subtleties yet to articulate. I already notice how reading and writing are accompanied by a much stronger awareness of place. The experience further encourages me to allow my thoughts and aspirations to expand. Potential is to be explored. What is possible and not possible cannot always be pre-determined. Perseverance is challenged by venturing out, while being reconciled with the unfathomable. Perseverance embraces learning in majestic surroundings and humble circumstances alike. Now I see gratitude at the foundation of perseverance and growth. 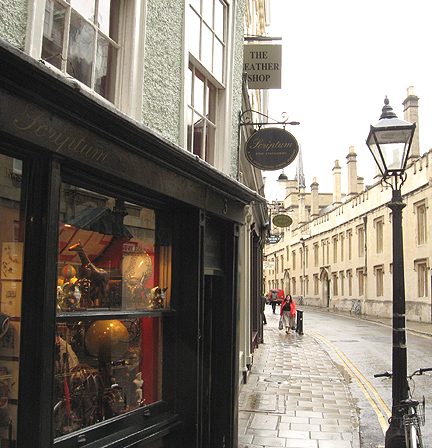 In my earlier essay, called "Scriptura et Scriptum," I wrote about the wonderful Oxford stationer Scriptum. Recently, I sent the photo (immediately below) to them, asking about the dip-pens (at the lower right corner), and with this photo as a guide, I purchased them, with a few more custom-made journals (second photo below). 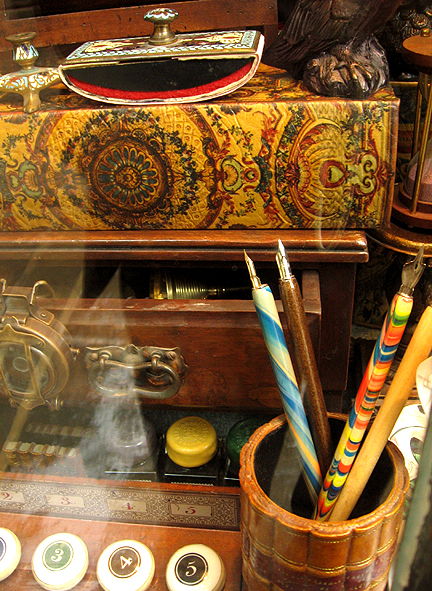 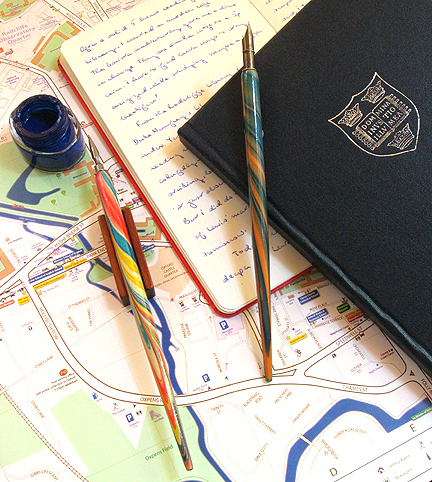 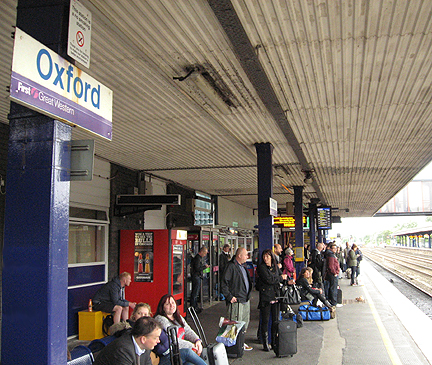 Boarding the train at Oxford station, for the long travel to North Wales. 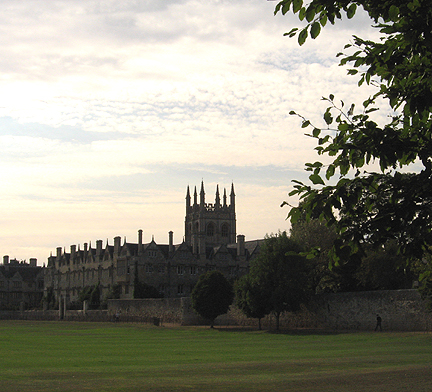