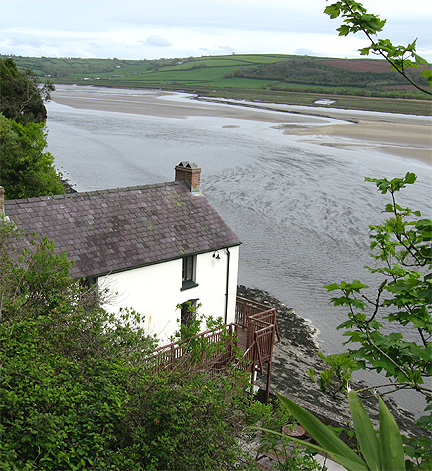 “A tiny dingle is Milk Wood
By Golden Grove ‘neath Grongar,
But let me choose and oh! I should
Love all my life and longer

To stroll among our trees and stray
In Goosegog Lane, on Donkey Down,
And hear the Dewi sing all day,
And never, never leave the town.”

A thorough sojourn into Dylan Thomas country brings the pilgrim traveller from Swansea to Laugharne (pronounced "larn"), as well as contiguous Carmarthenshire and the Gower Peninsula. The southern coast of Wales, west of Swansea, progresses to winding roads, villages, cliffs, and sands. Considering how Dylan had lived his young years through the Depression and the bombardments of World War II, my impression is that Dylan grew to cherish the contrasting tranquility of Laugharne- as well as some of the local characters he later portrayed in Under Milk Wood. 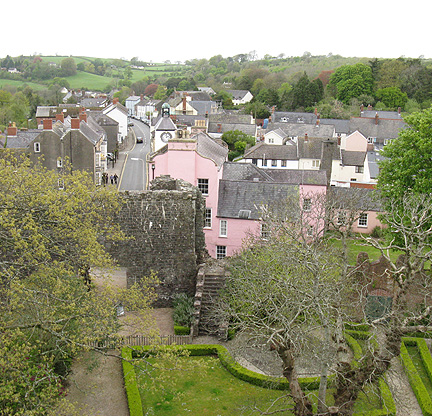 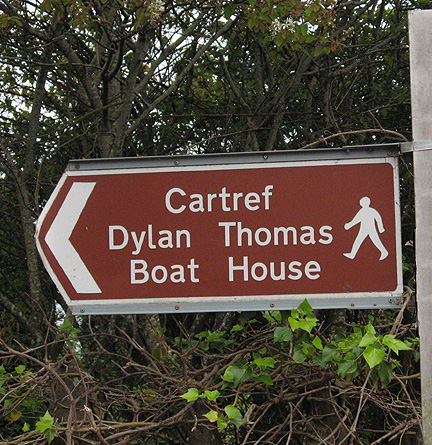 Arriving in Carmarthenshire, after crossing the country from north to south, advancing westward from the industrial cities of Cardiff and Swansea, I experienced a gradation toward open rural landscape and ocean. Walking from The Grist, near Laugharne Castle, to Market Street, then Victoria Street, the handful of shops, tea rooms, and taverns gave way to the Cliff Road- which thins and threads into Dylan’s Walk. As paths silence and simplify, the landscape broadens. 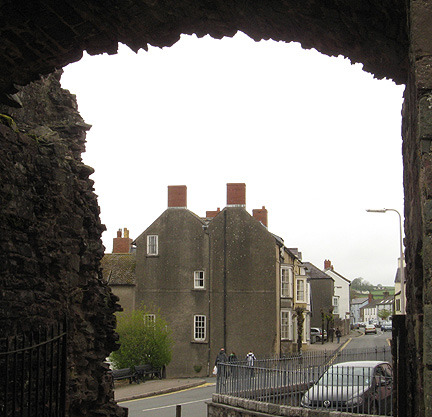 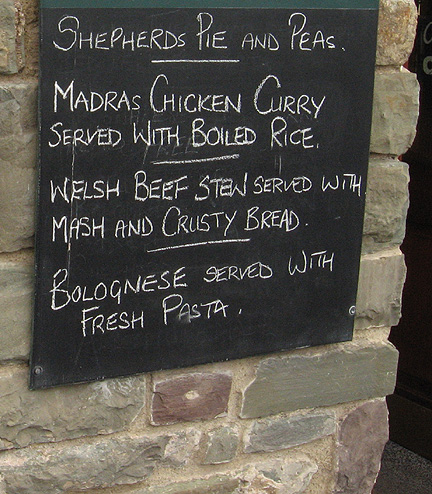 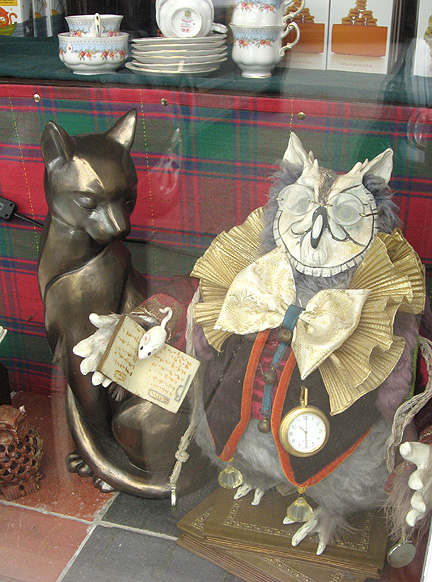 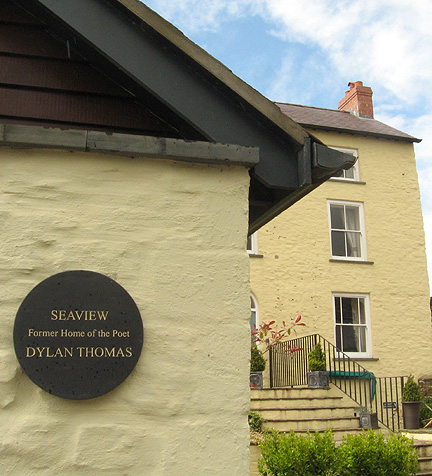 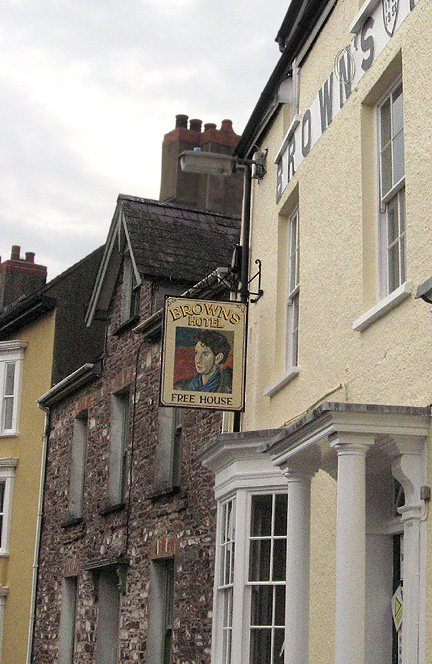 Pilgrimage by its very nature unfolds, continues, extends, and enwraps. The voyage of discovery is a vehicle whose value appreciates with mileage. Each introduction and extended walk broaden the spectrum of the soul’s sense of creation. Coastal terrain, replete with turns, exemplifies the uniqueness of each single stride and corresponding vantage point. Welsh roads wend and ascend with the land, unveiling views with movement. Motion is implicit- not simply of physical paces, but also of thought. Thus, intrinsic to the pilgrim journey is opportunity: As one’s steps manifest their inquiries, opportunities may be sought as well as created. Inevitably, the pilgrim traveller cannot be entirely passive. After all, to seek is to be actively conscious. 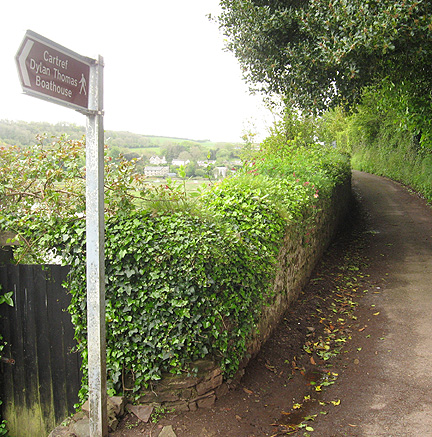 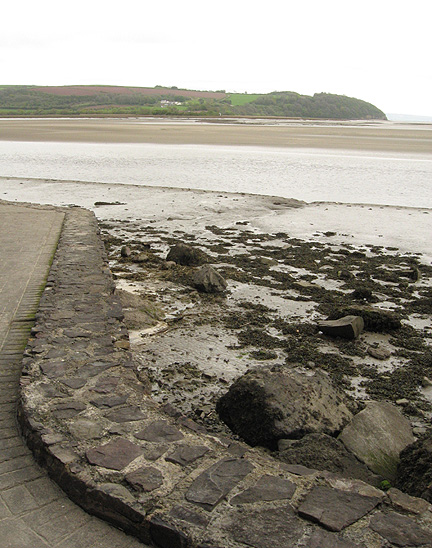 With two visits to Laugharne, in the space of a week, my thoughts returned to the very purposefulness in travelling to Carmarthenshire, to South Wales after North Wales- and even to Wales itself. To explore is to inquire of a place, and both sojourns to Laugharne each became something extraordinary as my steps would reach the path to the Boat House, called Dylan’s Walk. As the leafy narrow path turns leftward, with the estuary at the right, the places I’d seen in pictures and on book-covers blossomed into the living three-dimensional present. From the tiny writing shed to the ledgelike Boat House, my senses convinced me of my arrival. This was an instance of reality far exceeding anticipation. And surely the impression was not confined to the boat house alone. The home’s fresh-aired environs provide its contextual impact. The jutting structure is surely moored to Laugharne, its estuary, the ancient castle nearby, and coastal roads. 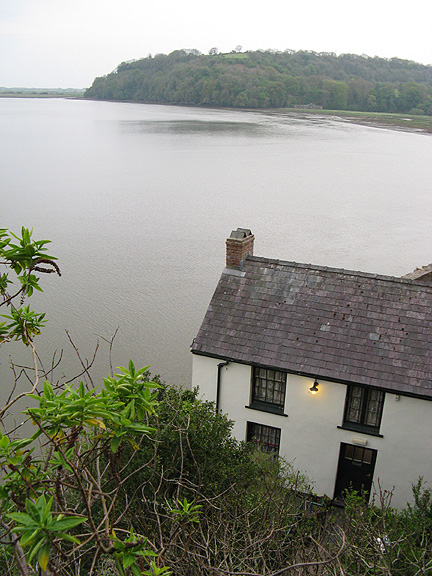 The Boat House at high tide. 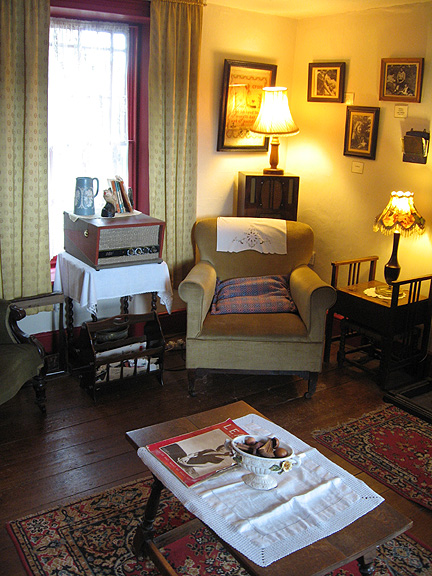 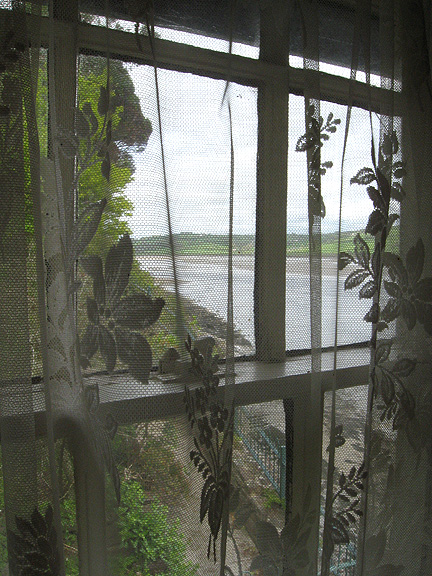 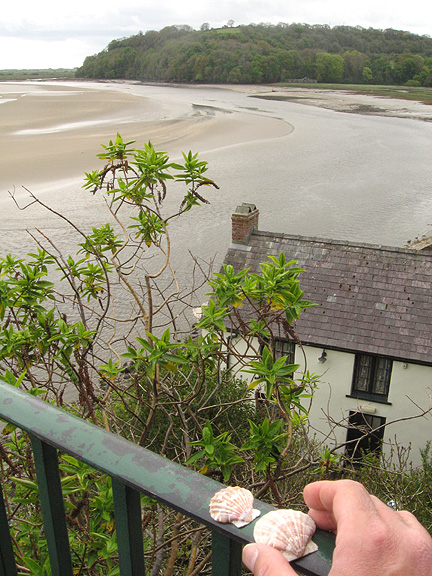 Leaving some Maine shells for Dylan.


On the first occasion, I visited the Boat House as part of a gathering devoted to writing, the spoken word, and cultural exchange. Throughout a balmy mist, an eclectic group that shared an admiration for Dylan shared anecdotes about the writing journey. Jackie Hayden read from his new book which compared Bob Dylan with Dylan Thomas, in a musician’s journey. A distinguished poet who is also the Arch-druid of Wales read Dylan Thomas in the beautifully lyrical Welsh language. (When we greeted each other, I wished him “shalom aleichem, from one ancient root to another,” and he liked that very much.) The writers’ evening concluded with folk music from Wales and Ireland, along with jovial toasts of wine- all on the wooden deck of the Boat House- followed by a conversational nighttime procession of writers and musicians along Dylan’s Walk to the Portreeve Tavern. Indeed, and integral to the sharing of journeys, pilgrims enjoy one another’s company. More toasts and cheers, with pencil and journal just under the rim of my plate of fish and chips. An evening for all the senses. 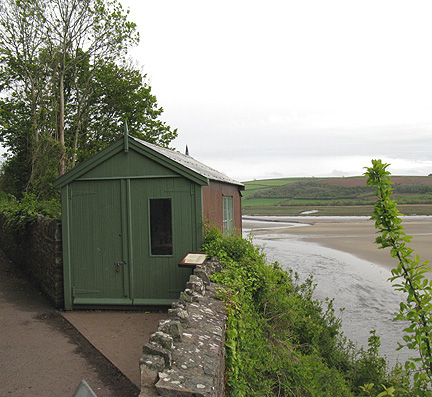 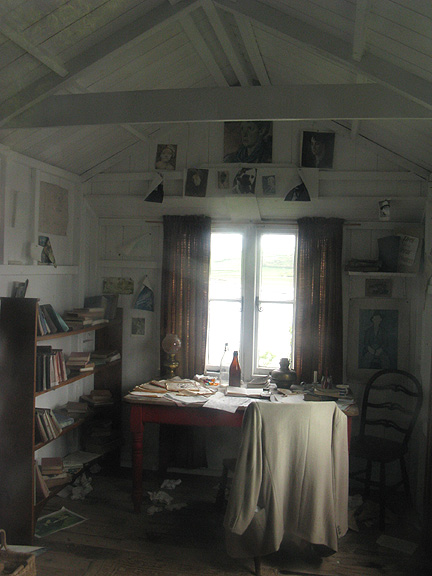 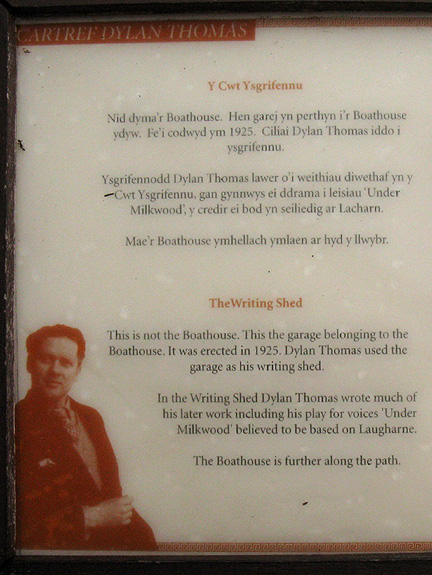 My second visit was on a sunny and quiet late-morning. It was a chance to really visit the house’s interiors and stroll the length of the sands between Dylan’s Walk and the town. There was time to see the writing-shed and enjoy just a few conversations and plenty of silence. The initial visit emphasized people, and the quieter second visit was for the surroundings to speak to me. And I could build upon an established sense of direction. Exploring a new place enkindles impulses to stabilize one’s bearings. It may take the form of sensing where north is, or east, or the ocean, or the direction to the center of town. That sense of bearing can manifest in steeled cities of millions, as well as around the village clock. Exploration provides for the absorption of environment and place. 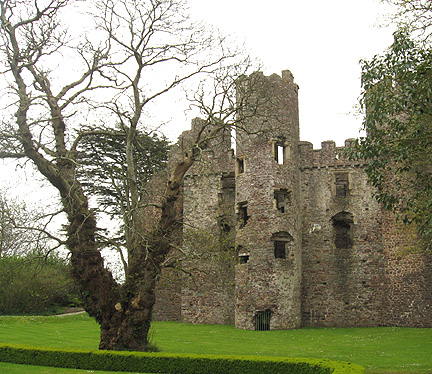 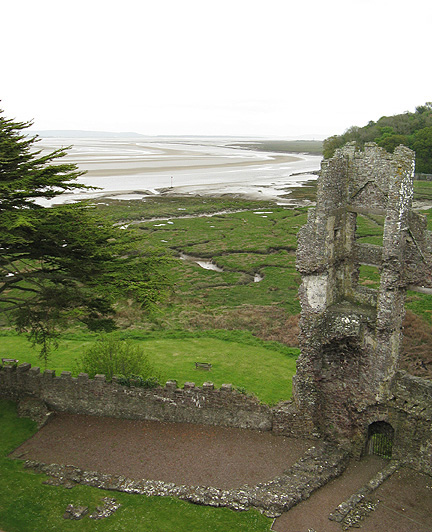 From the daytime estuary walk, I was able to view the town from atop the towers of Laugharne Castle. The small town blends references to the region’s antiquity, along with testaments to Dylan’s life. Brown’s Hotel, the Seaview House, and their situating narrow streets provide more stations for the literary pilgrim. Dylan fancied the “timelessness” of the old-fashioned “dwindling seaport,” with its intimate confines and simpler ways. He described Laugharne as “a legendary lazy little black magical bedlam by the sea." Though barely forty miles from the city of Swansea, Laugharne seems a much greater distance away. An equivalent (though with greater distance) would be the contrast between Boston and Downeast Maine. Before setting forth from Laugharne, en route for Rhossili and Carmarthen, it was of great importance that I see Dylan’s grave to pay my respects. He had died in New York, and I’ve visited Saint Luke’s on Hudson Street, in Greenwich Village, where his funeral had been. His grave is at Saint Martin’s, in Laugharne. I left Dylan some Maine seashells, and told him about what a Portland lad does for work in the land Sarah Orne Jewett called The Country of the Pointed Firs. 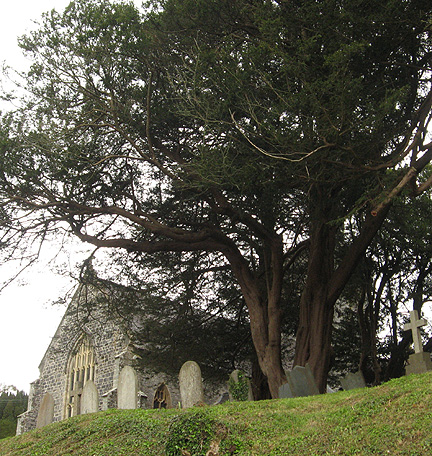 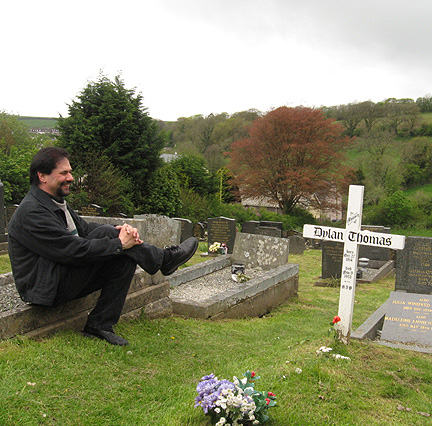 Now my thoughts of these journeys are retrospective, and my perceptions of Dylan’s life and writing are enhanced. Equally enhanced is my admiration for Wales, once again with Dylan’s footsteps in the lead. 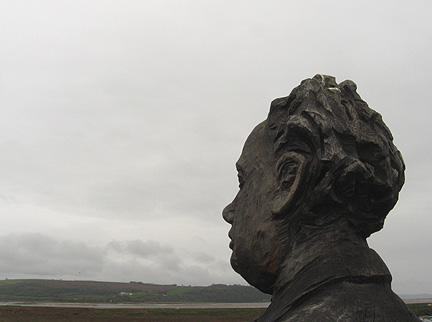 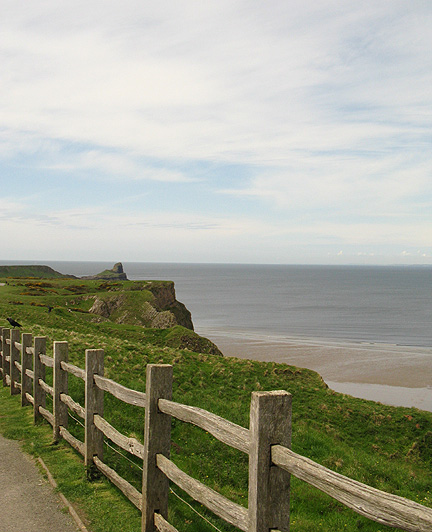 All these places in Laugharne look very inviting.

Hi, Jon from Laugharne here. Loved your article and have shared it on the Browns Hotel Laugharne facebook page. Good work.

I was there the same weekend as you. Good to read someone who shares the reverence. Indeed we share many of the same Dylan related experiences. La vie graphite is my living too. I cordially invite you to http://www.homedraw.co.uk