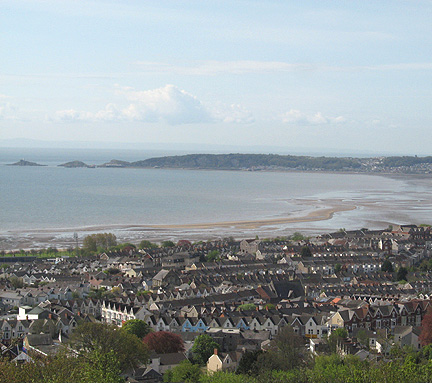 “Oh yes, I remember him well,
the boy you are searching for:
he looked like most boys, no better, brighter,
or more respectful;
he cribbed, mitched, spilt ink, rattled his desk
and garbled his lessons
with the worst of them...” 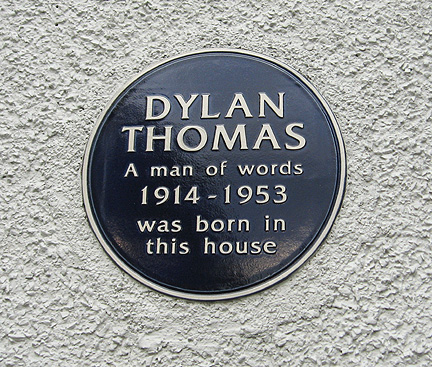 While planning my travels to Wales, the prospect of exploring the places frequented and inhabited by Dylan Thomas became yet an additional pilgrimage. A lifetime of reading and admiring the brilliantly innovative poet from Swansea led to a thirst to know more. In this recent decade, I’ve regularly read Dylan Thomas’ work to audiences, notably his colorful narrative Child’s Christmas in Wales annually. Known simply as Dylan in his hometown, I had the supreme pleasure of a week’s worth of tracing the poet’s steps, seeing the places of so many of his words, and actually living and writing in his home. Enquiring of the Dylan Thomas Centre about regional places to visit, I was put in touch with the curators of both the Centre and of the famous birthplace and home at 5 Cwmdonkin Drive. As our long-distance communications evolved into collegial friendships, I’d sent portions of La Vie Graphite abroad, particularly with my many references to Dylan. Warm and spirited invitations grew out of these written conversations. 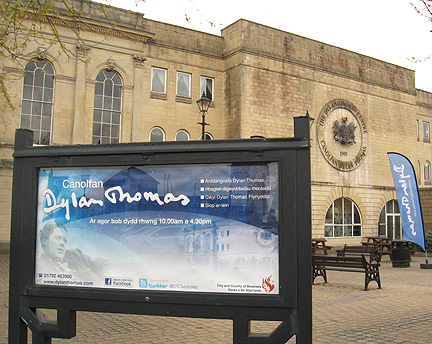 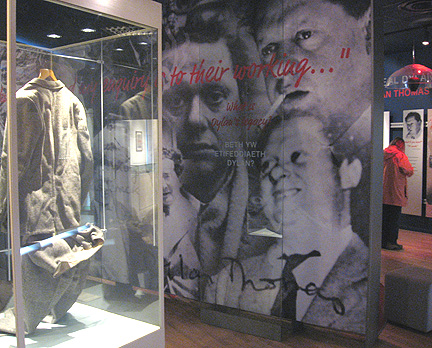 Following two weeks in north Wales, my pilgrim travels to south Wales were met with an extraordinary welcome in Swansea. Months of correspondence helped strengthen bonds of friendship, leading to the most beautifully unlikely “welcome home” I’ve ever experienced- beginning at the Swansea central train station, and continuing to Dylan’s home, which is in the Uplands neighborhood. 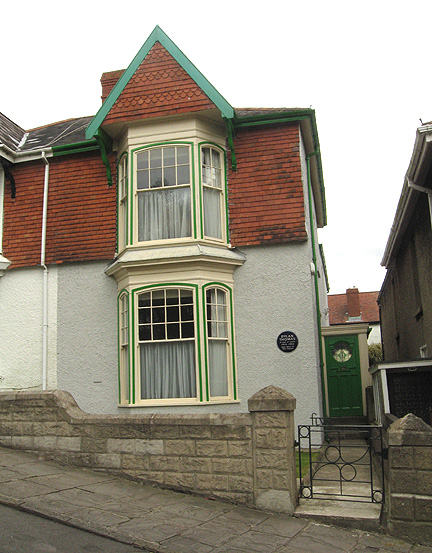 Imagine being enthusiastically and genuinely welcomed home to a place you had never seen before. As these images linger, it seems to me this reception is a taste of heavenly spheres in eternity: the welcoming embraces, an extraordinary sense of familiarity, and all in places I had never visited until having arrived. As a Portland Mainer in Swansea, the many tastes of home include steep streets ascending from rock-ribbed shores, the seaport, and hospitable shopkeepers. As Henry Wadsworth Longfellow’s stamp is indelibly on Portland, so Dylan Thomas is everpresent in Swansea. Dylan’s likeness and his words appear enshrined around town. Swansea was his birthplace and the city to which he returned after occasions in which he experienced life away from the region, and the returns permitted his continuum with Swansea to deepen as his voice seasoned with time. 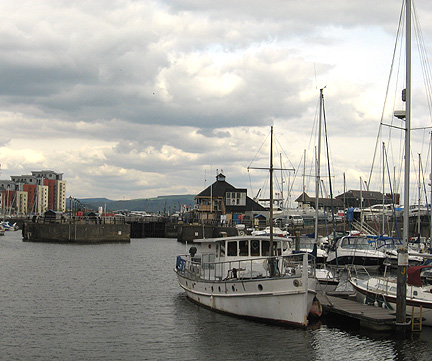 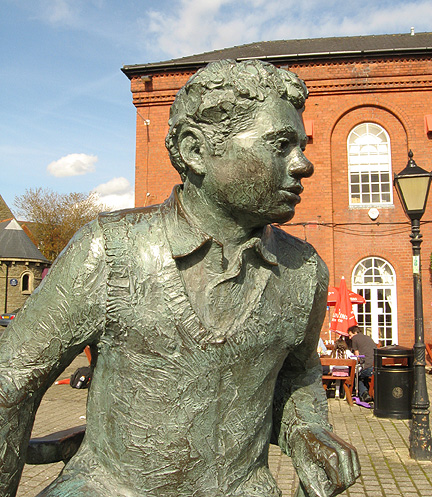 Longfellow mused about his “dear old town” of Portland, “seated by the sea.” Dylan referred to Swansea as his “ugly, lovely town,” and I recognize endearment in his expression. Port cities are gritty, yet when they are located on beautiful seacoasts loveliness abounds with their pervasive rainy gusts. “The fishingboat-bobbing sea” may have come to Dylan in nearby Laugharne, but it is indeed the same sea as Swansea. Settling into Dylan’s home was accompanied by the parallel gifts of vantage points. Peering from the same windows, I looked out to the same locations as he did. His paths, his childhood’s Cwmdonkin Park across the street, his back garden, and his front steps. 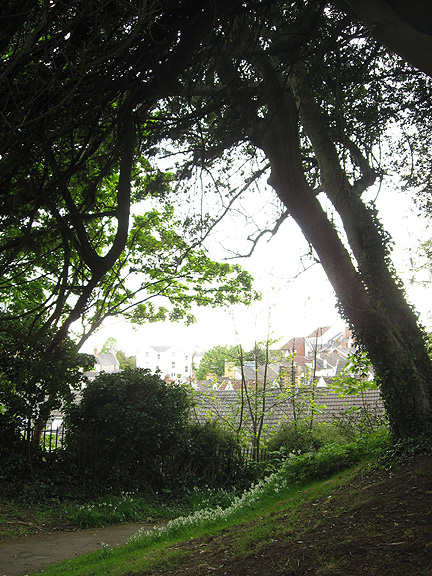 
The neighborhood streets are clutch-straining steep, with railings along some of the sidewalks. Though the Uplands district of town is surely more now than Dylan’s description of, “a square, a handful of shops and a pub," in the first half of the last century, the terraced hilltop neighborhood evinces an intimate sense of self-sufficiency. Essentials around the square include bakeries, eateries, grocers, and a great stationer. Any neighborhood ought to be so fortunate. The view out to Swansea Bay and The Mumbles can be enjoyed from most streets, and this aspect immediately brought Portland’s sloping Munjoy Hill to mind. 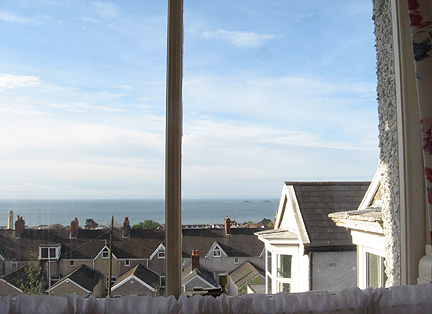 Above photo: Dylan Thomas wrote about this window view. As a child he said the ships rode over the rooftops. 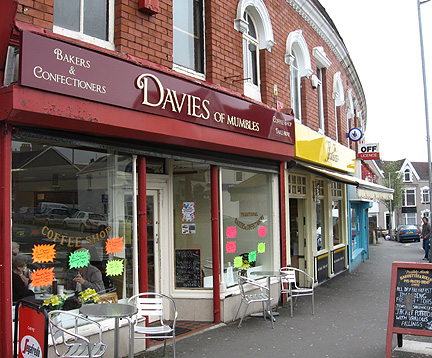 Living for a week at Number Five, I greatly cherished writing in Dylan’s house, and making myself at home. The curator of the house, who lovingly maintains Dylan’s home in its circa-1920 splendor, encouraged me to live in the house- to use the rooms, furniture, kitchen, larder, and tiny scullery. The gramophone in the parlor works. Dylan’s father’s study has his typewriter- an Imperial Good Companion- and it works just fine. I installed a fresh new ribbon on it, as I’d brought along a spare for the long journey. After all, it’s home. On the study desk, next to Dylan’s typewriter, I found the century-old inkstand intact and ready with two dip pens. The curator had filled the glass inkwell with new India ink. With great respect, I wrote with these tools, often looking to the back garden from the door near the desk. 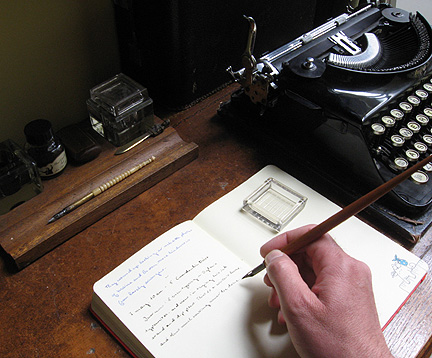 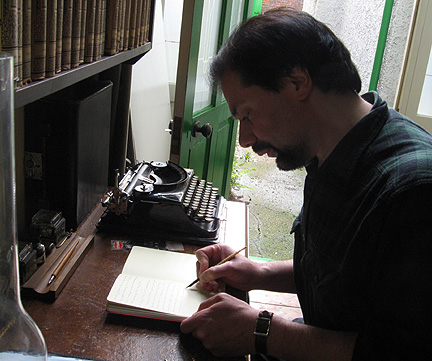 The sojourn was surely as social as it was introspective. After arriving to a rousing writers’ event out at Dylan’s boat-house in Laugharne, steeped in misty chilled air, festivities followed the next day at Number Five. I read some of my own writing, along with a portion of Dylan’s Under Milk Wood to two audiences. Between readings, with my typewriter placed at the center of the room, we all spoke about creative processes. Some people asked me about why I came to Swansea and about my history with Dylan’s poetry. A few asked about my Olympia Splendid 33, gleaming on its perch; I was asked if it was brand-new, and replied that it wasn’t, but rather had been spruced-up at a typewriter shop back in Boston. I spoke at some length to both audiences about pilgrimage, drawing parallels between visiting Dylan’s home, along with his favorite places, and visiting the Walden Pond and Concord of Henry David Thoreau. Exploring where the words came from, appreciation becomes a lived and beautiful adventure. Discovering the sources of words reveals their contextual colors. When written words are spoken, their native sounds are set forth. With this in mind, I told the audiences that the sounds of words are as important as their very meanings. 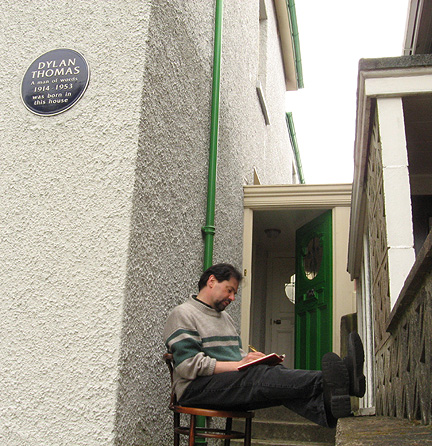 Through the week in Dylan’s house, which was his birthplace as well as childhood-into-adulthood home, I found a few favorite perches of my own. Among his books, it was impossible not to smile when I saw a well-used and thick volume of Longfellow’s poems among his shelves of classic English and Welsh literature. As I like to do at home in Portland, I brought my writing out to Number Five’s front steps. Indoors, it was the palpable warmth of Dylan’s dining room that captivated me most. It is at the heart of the ground floor, between the bottom of the stairs and the kitchen, with a side door leading to a side walkway to the back garden. The entire house has an overspreading and welcoming warmth. It had been pointed out to me that Dylan’s mother, of warm and religious temperament, made the home especially hospitable. It was easy to imagine them together, while remembering my mother and my childhood self. Then I realized I was actually in the very home that is so tenderly described in A Child’s Christmas in Wales. 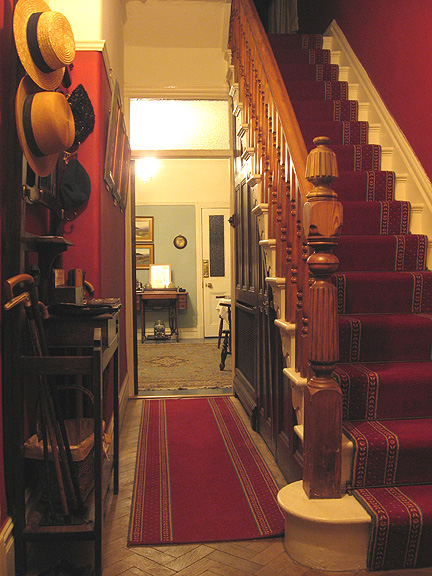 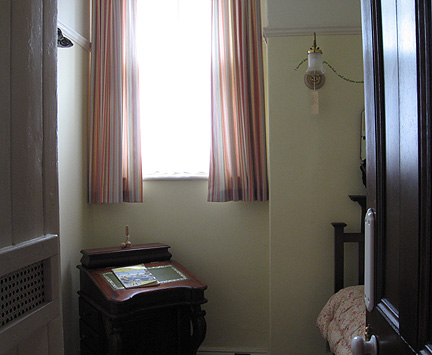 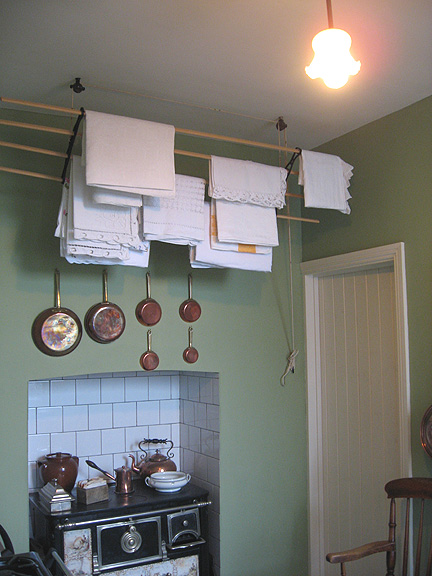 Above: Kitchen; Below: Scullery. 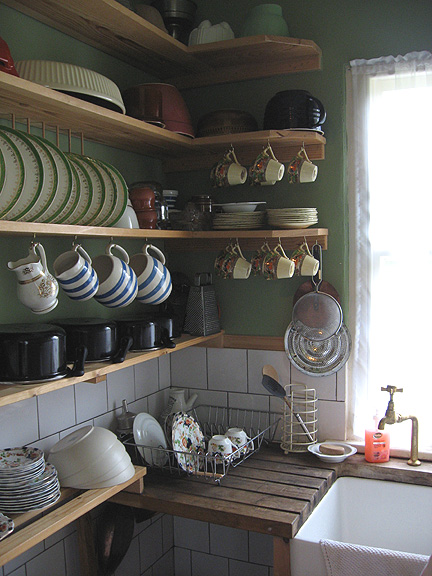 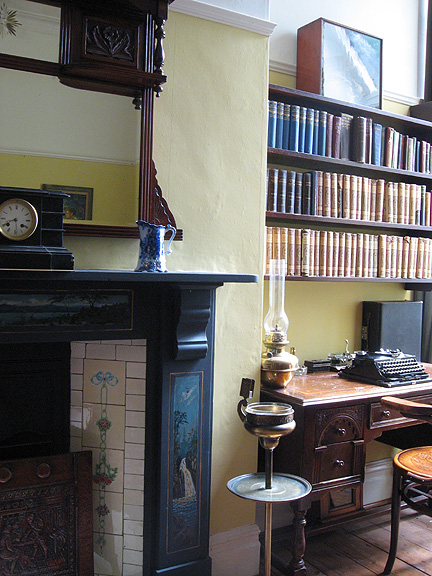 Above: Study; Below: Corner of Parlor. 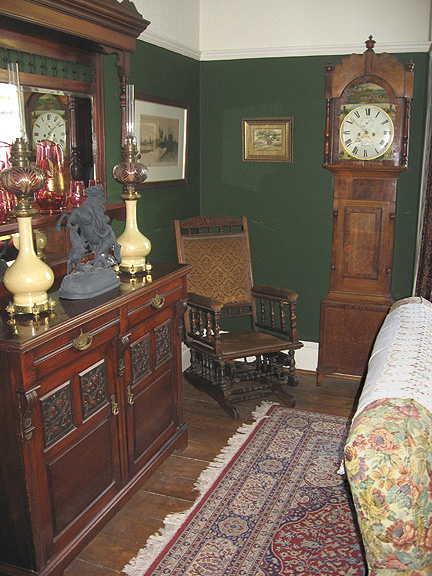 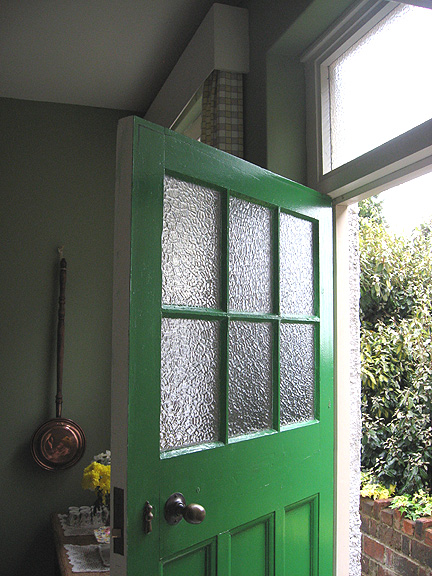 Kitchen door to back garden.


Though the entire experience is something I will treasure all my days, I especially relished staying up late at night and writing at Dylan’s dining table. Cwmdonkin Drive is a very quiet street, and the house stands peacefully at ease. The curators added a bottle of wine, along with my other provisions for the week. At night, I would toast Dylan in his home, while writing at the dining table. On one occasion, I wrote my toast of gratitude to the poet right in my journal. After visiting many places and listening to numerous stories, all with Dylan’s steps in common, I penned my words of thanks to the bard of Swansea who continues to bless others, long after his earthly life has passed. 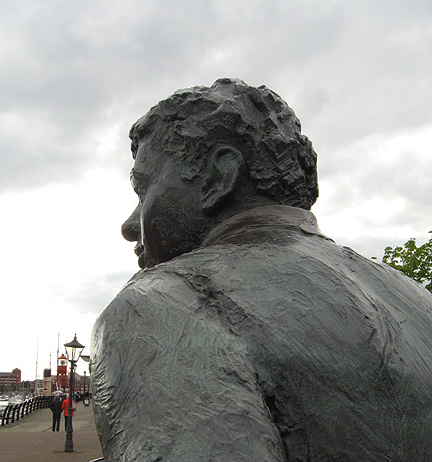 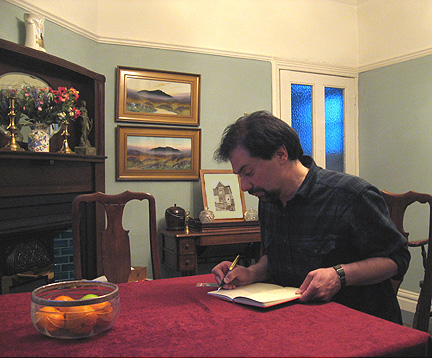 If I may; well I will state it in any case. I am enjoying your trip immensely.
The places and buildings are splendid. Your writing as always is excellent.

How fortunate you were to spend such quality time in Swansea by the sea. The welsh are so endearing and friendly and a friendly toast is always required while there. With me it was always about the Rugby which the Welsh take very seriously. Its a trip that will be with you forever because of the people you met.

"Clutch-straining steep". I love that, I wonder sometimes how long 'clutch' will remain part of the vernacular. Thanks for another great trip report!!