a perch on Montmartre 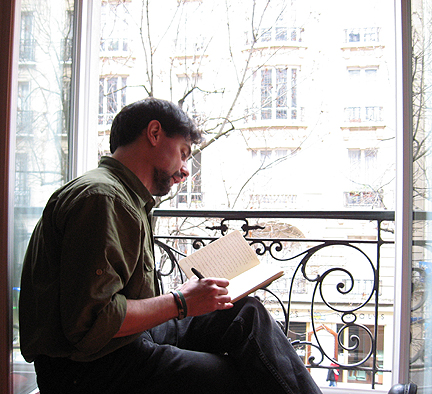 "The Little Prince climbed a high mountain. The only mountains he had ever known were the three volcanoes, which came up to his knee. And he used the extinct volcano as a footstool. "From a mountain as high as this one," he said to himself, "I'll get a view of the whole planet and all the people on it..." But he saw nothing but rocky peaks as sharp as needles."


This is a time during which all things are taken close to heart. Surely not in the sense of being agitated at the slightest tremor. Immersion in one's being is not even close to superstition. Quite the opposite, to breathe in deeply of the Spirit is to realize the extent of one's strength. I have experienced joyful welcomes in places that are thousands of miles apart. It is as though I have many homes, when I feared I had none. Far above place, it is the enthusiasm of greeting which goes straight to my heart; honest kindness, gratitude, and openness.


In recollecting, I am brought to ponder how the precipice of despair has forced open my receiving embrace of mercy. It remains a wonder to me, and I believe it will for a long time. Changes of scenery, even for the cause of refuge, have become ways of returning to myself. I sought to remedy what was lacking, and as I emerged from the crepuscular void of grief, it turned out that nothing and no-one is missing. The fear of loss is gone. I am here.


As we return to ourselves, we go to the innermost realm where truth dwells; it is not beyond our reach. Indeed, the words of life are right on our lips. How I had lost sight of that! In retreating for refuge, all along the way I noticed beauty- the kind of plain eloquence that brings the brilliance of the spirit to consciousness. The shifting light of day, the taste of fresh bread and fruit when we’re famished (but trying to be discreet about it), receiving the presence of others, scents and sounds. Perhaps what was lacking, if anything, was perspective, and perhaps part of that was forgetting to be conscious.


Care must be taken not to be so quickly self-condemning, that I cannot learn simple truths the first time around, and that I must learn the same life lessons many times over. It is all to make emphasis that as deep suffering gives way to peace, what I saw as numerous "false starts" are actually increments pointed toward this very moment I am writing these precise words. Points of view I have wished to leave by the wayside now become incongruent to the extent that such negative perspectives simply no longer fit, and do not warrant another minute’s worth of time. Oddly enough, anxieties re-appear, even when I worry about maintaining the good momentum of renewal. The feelings are strangely familiar, but their substance is now simply out of context. Indeed, this forward motion requires some nurture, even after such inertia has been overcome, and progress will proceed. It will.


Innumerable "false starts" are still no cause for cynicism. And to be troubled about such things is as self-undermining as worrying whether I’ll wake tomorrow morning and wondering if I’ll wash up, have my coffee, and brush my teeth. Of course I will. I always have. It seems I need to actually see myself learn these lessons. Aspiration allows me to see possibilities, and in turn I continue to aspire. As it was for Augustine, to desire is to be truly in prayer; the two are parallel. And though I must fully engage the chaos, the silence of the monastery need never depart. Even in humble, workday parcels, silences bear the roots of the cultivated interior life, recalling how greater is that which is within us than that which passes through this world.

I am somewhat speechless on this one. This is by far one of your best posts for me. They are all wonderful but this one is so close to my own feelings that I am literally speechless. It's as if I woke up, read your blog, and you have taken the words right out of my mouth.

Thank you so much for this. It's beyond perfect.