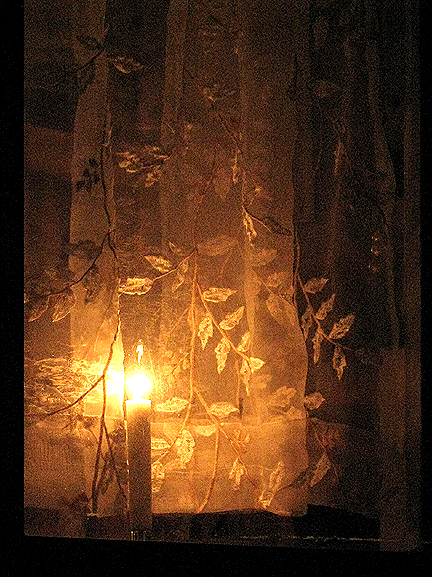 "My library is an archive of longings.”

~ Susan Sontag, As Consciousness is Harnessed to Flesh: Journals and Notebooks, 1964-1980.

At the beginning of this month, perhaps to parallel the start of winter, a number of wire news services published an article* about disruptive discontent. A study based upon the responses of two thousand survey participants reported that nearly three-quarters of this group sleep poorly and awaken unhappily. Referring to “morning madness” and a general sense of irritation among respondents, a third of the surveyed group cited anxiety and stress disturbing both sleep and awakening. Indeed, the article caught my attention, as I’ve been an insomnia combatant for over a dozen years. Had I been surveyed, my responses would’ve looked similar to those of the article. Having become so accustomed to fractured nights of semi-sleep, portions of these silent hours are offset by journal writing, radio listening, and reading. Penciling ideas on notepads. Not necessarily solutions, but accompaniment. 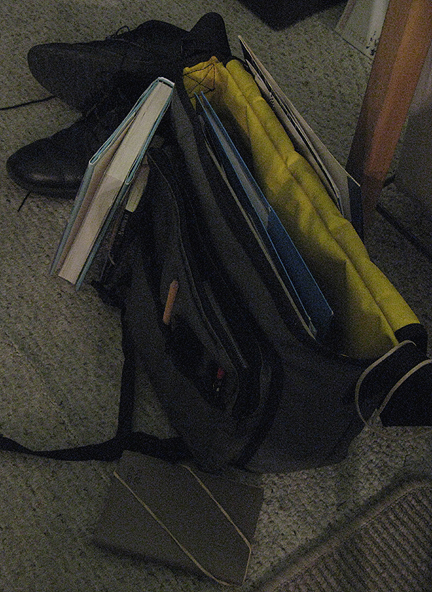 So many thoughts to assuage. The canvasses elasticize between present, past, and the unknown future, projects and words, stability in the tentative, should’ve and could’ve, then and when. Just what a mind needs to relax! Walking around my darkened apartment, the clatter silences as I look at the books and papers on my desk- the open satchel at ease. The still-life calms, as my thoughts are diverted by the quieted tethers and tools. What is normally animate has become inanimate. There is scant ambient light and no traffic noise, in the liminal between night and morning. 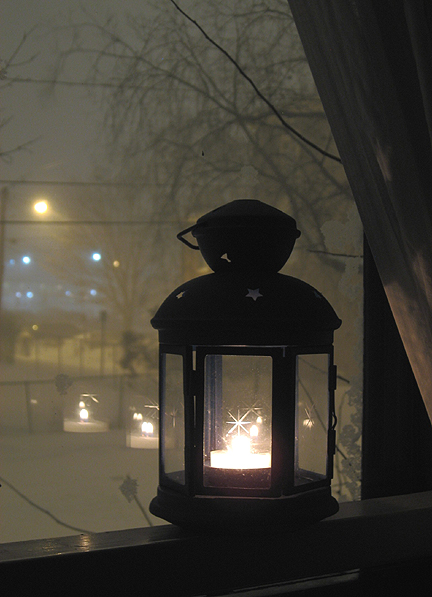 Through the window, it is good to see the nearly motionless outside world. Thoughts turn to expectations. Do you ask yourself about what you’re expecting? I’ve always expected great things: dreams, fruition, breakthroughs, open doors. From as far back as I can remember, I’ve wished to live up to my potential, putting all I’ve learned to real use. It’s a longlived emotion that has haunted me all through the years of schooling and employment, toiling in the concealment of stockrooms, basements, warehouses, darkrooms, and clenched stacks. Beyond thirsting for natural light, fresh air, and artistic freedom is a wish for opportunities to fully apply my skills for the greater purpose that other souls can be inspired. Hopes, attempts, and denials seem to repeat a leapfrog-playing pattern. But there remains the not-yet, a spirit solid enough to support ideals and ambitions. Even now. 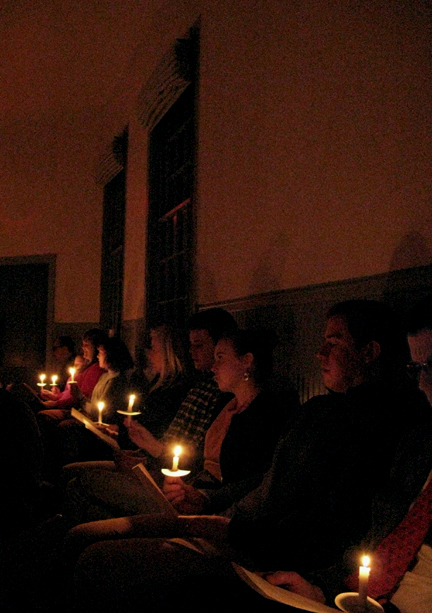 In Citadelle, Antoine de Saint-Exupéry observed, “Nothing have you to hope for if yours is the misfortune of being blind to that light which emanates not from things but from the meaning of things.” How things look and how things are- can be at contrasting ends. Blended in with clear-eyed expectations is an accompanying awareness of mirages. It is very easy to be fooled, a narrow margin dividing notions and facts. Social media certainly enhances the challenge to make these distinctions. About the first ten times I’d seen commercial articles, decorated with tropical seascapes, about “following your bliss,” my reactions were those of sarcastically looking on as an outsider and an unlucky have-not. These sorts of proliferating short pieces look like they emanate from people who can afford to blithely walk away from disappointing jobs. What about the rest of us that have to bite the metaphorical bullet? From a perspective that resists both cynicism and irresponsibility, I try to keep common sense in mind. Comprehension and aspiration are both highly complex dynamics. Turning away from self-defeat, and reaching for transcendence, Quaker author Rufus Jones wrote:


Every case of sense-perception is a case of self-transcendence. If we could not leap forward and grasp an object from beyond us, and know it as beyond us, all our experience would be doomed to be shut up in an inner subjective mirage. We could never have dealings and commerce with a real world beyond our inward seemings. We should forever remain victims of the ‘egocentric predicament.’ In a trembling flash, when we perceive things, we manage to leap beyond ourselves and know a reality that is not of us, but of a world beyond us. Nobody knows how we do it. It is another mystery- like sweetness and redness- but it is none the less a fact. The moment we know anything whatsoever we prove to be self-transcendent beings.
(Pathways to the Reality of God)

Another conundrum is the relationship between potential and fortune. Is one needed for the other? Can they exist independently of one another? I’m inclined to believe the latter: potential can be driven on the steel wheels of will. Good fortune is welcome, we can do plenty to draw it, but waiting around too long wastes precious time. Everyone has the potential to add positive significance to their places and times- perhaps beyond these contexts. I’ve always admired “unsung heroes” as I’ve made note of them in many spheres. They’re the ones who are consistently present, performing their good works away from spotlights and newsfeeds- or as it’s said in sports: doing the little things that contribute and make a difference. At hockey games, I like watching what’s going on at the defensive end- where the puck isn’t; this teaches me a lot about how the players work together in the flow of regulation time. I admire the ability of turning missed opportunities into fuel, and instances of tireless daring in order to realize potential. 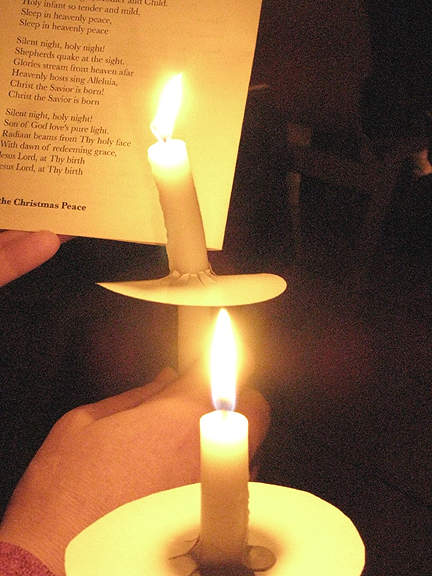 At this season, the month of Advent leads to the threshold of a new year. Lighting is needed earlier in the day. The anticipation in Advent’s shadowed steps is essentially an expectation. I still expect great things- even in the night watches of wakeful insomnia. The turn toward lengthened days begins during the longest nights. Years ago, when I made my living in the complete darkness of color-printing photo studios, I had a wise, older friend who managed the film department. A true artisan. To this day, I’m thankful for all our long talks in the damp, lightless film-developing room. From twenty feet away, with the benefit of the slight echo, his voice sounded three feet away. Above the sounds of the E-6 processor, he would say, “Don’t forget that God’s hand is always opening to you, always opening for you. You’re meant for way better than this.” My coworker had a terminal illness and passed away, much too young. His words and wit live on with me. They are filed with care, in my spiritual archives, with the treasures poised for future use. The past, admittedly, needn’t determine the future, but it can provide a useful repository of references. I fully expect to tap into the best of all that has been cultivated. It would be, in itself, a living gratitude for the gifts received and knowledge retained. More than an expectation, a goal. 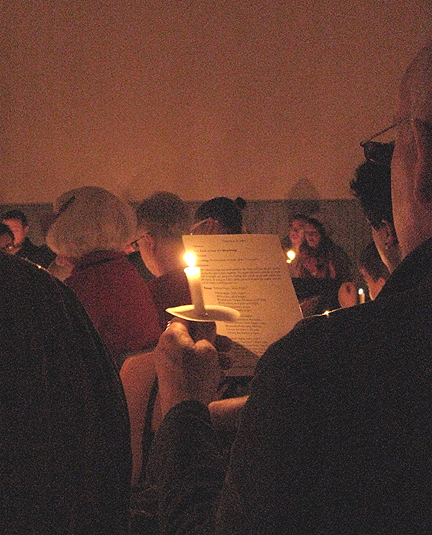 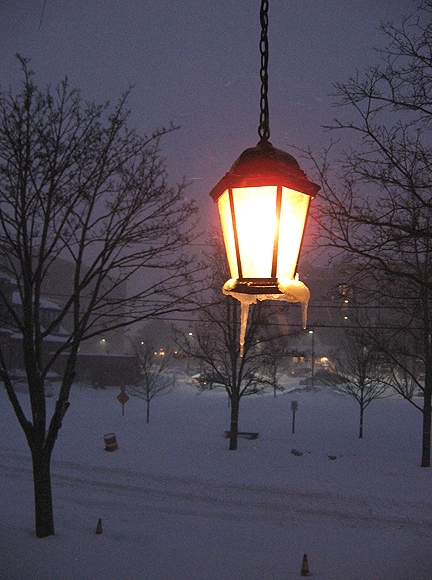 Posted by speculator at 7:25 PM

Expect just one thing: fulfill, with your life, God's expectations about you. Have you thought that maybe writing this blog, and touching the soul of people like me with it, is one of those expectations? Happy new year!

Saint Josemaría and the Sanctification of Work, any work.