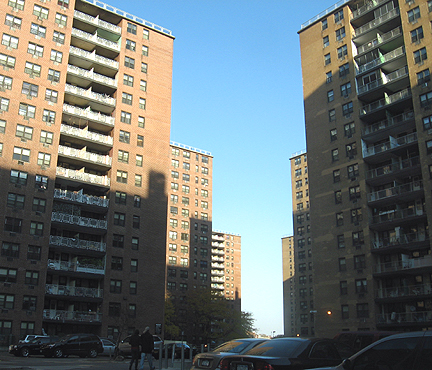 “Oh I know it, I know it, here is God beside.
I meant it. I meant I’m sure of that.
But the sky is tall and heavy,
when I could be brave.
Brave.”


The enormous housing project in these photos, which I’ve just made, show the place that nobody in my family will talk about. Our eight years there coincided with New York’s darkest years of urban decay and violent crime. Those eight years spanned age 5 to age 13 of my life. As I transitioned from elementary into junior high school, as a ten year old, the neighborhood’s quality of life had deteriorated into a ceaselessly nightmarish world of uncontrollable hostility. Today’s city, even with its present problems, is a world away from the war zone years of the late-‘70s and ‘80s. Life as a young child amidst America’s largest privately-owned housing project was one of tense attempts at survival. Within the 20 high-rise towers of 18 storeys each, comprising more than 16,000 residents in more than 5,000 apartments on 42 acres- are countless alleys, stairwells, elevators, garages, twisting corridors, and basements. Vivid memories of menacing dangers, being pursued, beaten up, and mugged in that monstrous project seamlessly intertwine with my parallel experiences in the district’s streets and schools to which I had been bound. 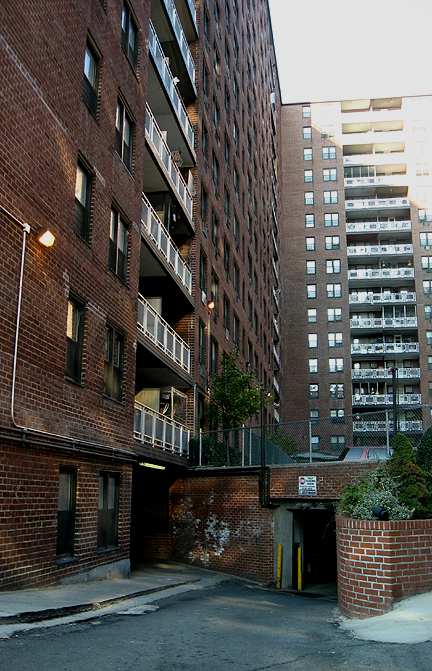 After my parents finally moved us out to a safe neighborhood, none of us ever returned to Corona. We did not talk about it, either. Going on to high school and young adulthood in Manhattan, I had plenty of immediate concerns. I also fulfilled the promised I made to myself to leave the city in favor of peaceful shores. Yet for many years- regardless of distance or age- those crepuscular labyrinthine hallways and cement trenches, along with lingering recollections of helpless subjection to merciless thugs- continued to violate my thoughts. Wishing for these cyclical nightmares to end, I began to ponder an extraordinary pilgrimage. Aware of the potential of words and images toward healing, it became a pressing necessity to see what these places would look like now. Now, as an adult; now in the post-Guiliani law-and-order New York of what I call The New Maintenance; now with notebook, camera, and car. Suddenly, I dreamed of visiting the places of so many nightmares. I needed simply to see. 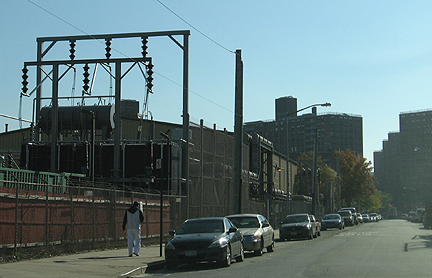 My walks to and from school still look the same as they did years ago. Imagine this at night. It became increasingly necessary to go, so that I could see how present buries past. Years ago, I met a Mennonite pastor who described a great metaphor to me. His family farmed wild rice in the upper Midwest, and they intuitively knew precisely when to harvest. This was based upon weather, humidity, and factors they could sense- even at night- and the harvest needed to be prompt and swift. He called this “wild rice time,” and indeed there was a theological application to his expression. Making this particular travel, not just to New York but to revisit the high-rise project, found its “wild rice time.” Musing was not enough. My pilgrim steps longed to recover those left behind long ago. There were deep imprints to verify as well as to dissolve into the mists of obsolescence. 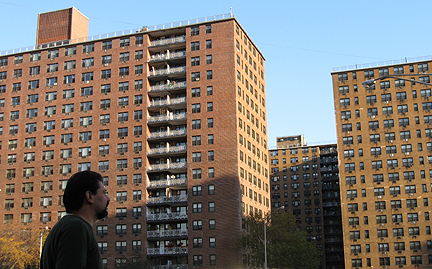 With the approval of my time-off request from work, I arranged a visit at my elementary school, and proceeded to prepare for the historic portion of this journey. Anticipating associated emotions, I planned the tough parts for the first day, with a week of city favorites and comforts to follow. This proved to be a good idea, as thoughts of seeing the streets and buildings of Corona haunted me into insomnia. I was able to tell myself that art museums, good food, and pleasant neighborhoods would reward. Before setting forth from Maine, I gathered seashells and decided I would scatter them in each of the important childhood places. Somehow this added more purpose to this strange pilgrimage. Tiny fragments from my home of choice have been left in the places I’ve survived. 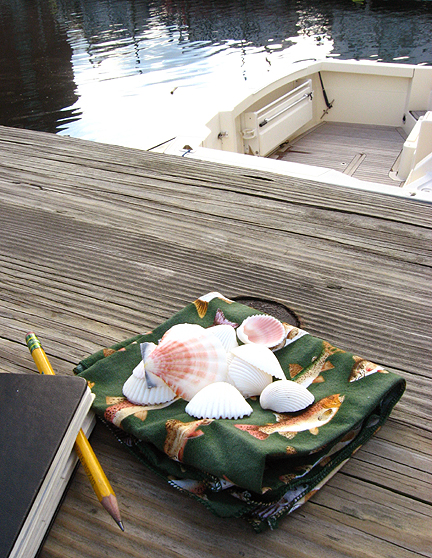 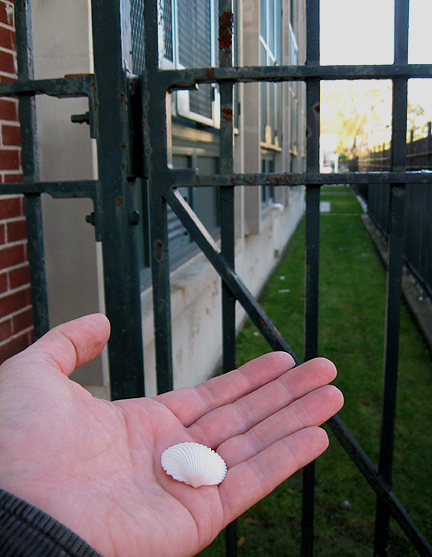 Counting down to the journey steadily unnerved and distracted me. It was as though a mental journey preceded the physical one. Very late one night, I tuned my radio to a broadcast in which a preacher quoted the biblical Paul’s advice to Timothy, his student, with a reminder that the Spirit of God is not one of fear but rather of strength, compassion, and a sound mind. Fear must not paralyze. My journal entries began describing what I called a “crumple zone” of hesitation, and a “Crucible Monday” to be endured- and with that I stopped writing and set aside the journal for several days. “Buildings and streets,” I heard myself say; “these are just buildings and streets.” The memories are not there. Though I can put them there, I can also erase them from present and future pages. It’s graphite. Yes, this called for bravery, but it seemed the greater courage was in the decision to set forth and fulfill- even more than the bravery to walk the pavement. Standing down the nightmares began with prayers, and somewhere between the highway voyage and parking the car with camera and seashells in hand, things had already changed. 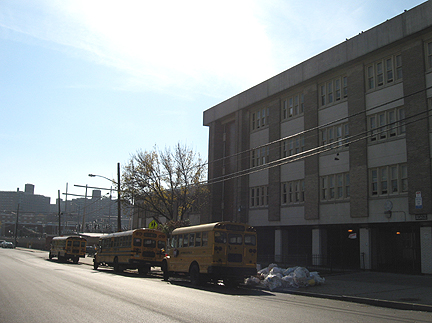 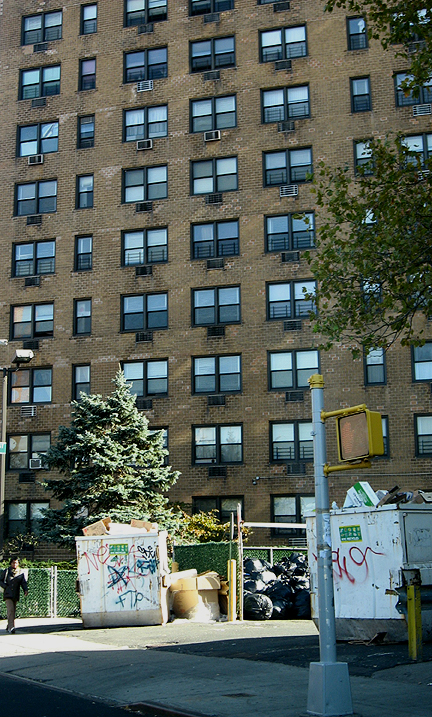 As anticipated, the massive housing complex looks as unwieldy as ever, but enough years of neglect and street crime evoke a general sense of shopworn weariness. The surrounding streets are startlingly narrow and congested. Iron bars cover more than just ground-floor windows, doors, and driveways, but even upper-floor windows and balconies. Inhabitants’ gazes from windows must be filtered by wrought iron bars. This is the polar opposite of life in northern New England. Rather than to see the streets and buildings as evil, I could only feel a respectful empathy for children whose early impressions of the world must happen though barricades cemented into pitted streets. But I was thankful to be there to see everything- and for an elementary school visit that was joyous beyond my expectation. That is for another essay. Past horrors have been converted into my gratitude and a recognition of goodness. With this visit, recognizing everything I’d remembered, I could also identify the changes in these places and within myself. It was an experience of corroboration- with teachers who remember what kids like me had gone through- and contrast; of distant memory and greeting the here-and-now classroom children. My prayers are with those who struggle in crowded schools, dangerous housing projects, and through iron bars. And for those who survive, interior reconciliation and the dissolution of fears. 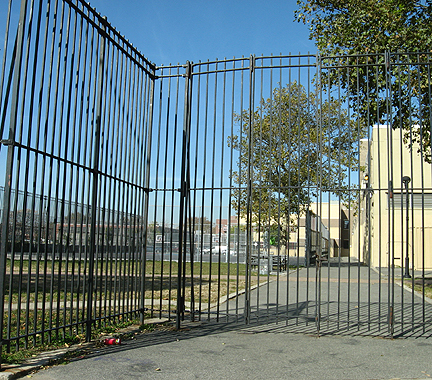 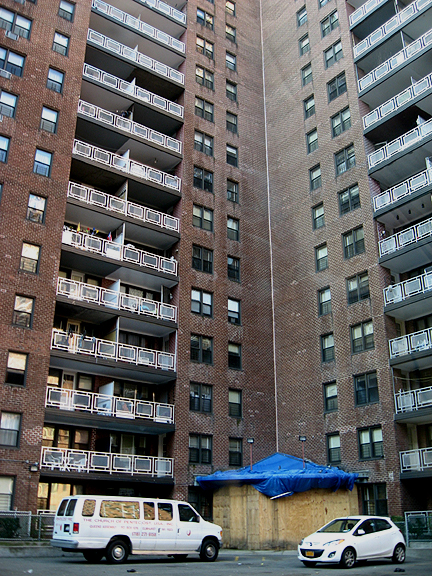 Now at home, I took the first opportunity to walk across Portland to a favorite perch on the Maine State Pier. Bracing air, clear skies, circling seabirds, and old friends remind me that I’m back. Pilgrimages historically always include the return travel and the re-establishment. That is because no matter the journey, pilgrims return as changed souls proceeding to reconcile road and routine. I know that I saw more than “buildings and streets.” But today, as I write these words shortly after unpacking car and bags, I am still in the aftermath. Throughout this past week in New York, words gradually surfaced and with a small notebook I jotted them down in the subway. A couple of mornings ago, on an E train, I pencilled, “even if I’m not home yet, I’m already on the other side of this.” That night, after a full day of visiting, walking, errands, and photographing, I awakened from an unusually deep sleep, and wrote down some words: “3:20am - the closure is in realizing that what lived on so vividly in my memory is no longer going on.” To say “not going on anymore” is to deeply recognize how the chaff of bygone years ceases to exist; fears cannot dominate when they are superceded. Such proofs must be lived, it seems I’ve just done that, and will continue to proceed. 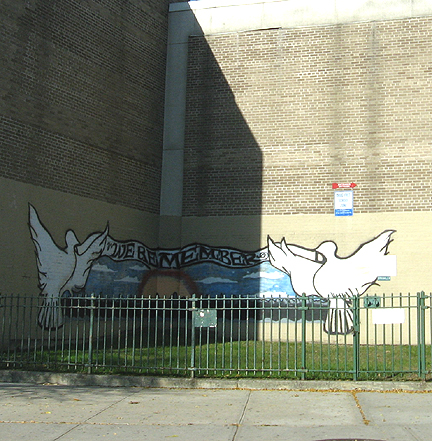 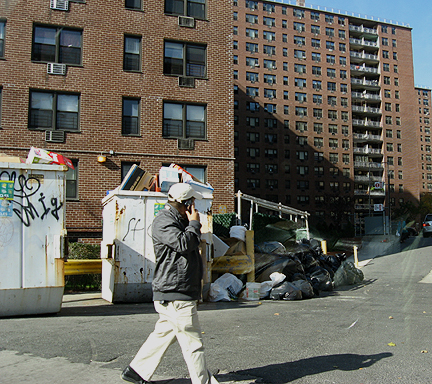 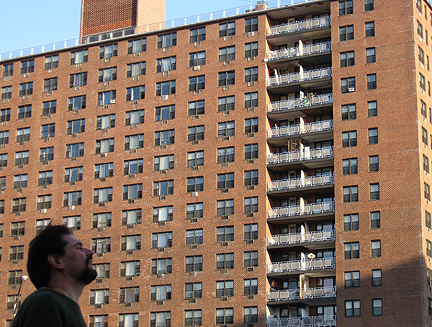 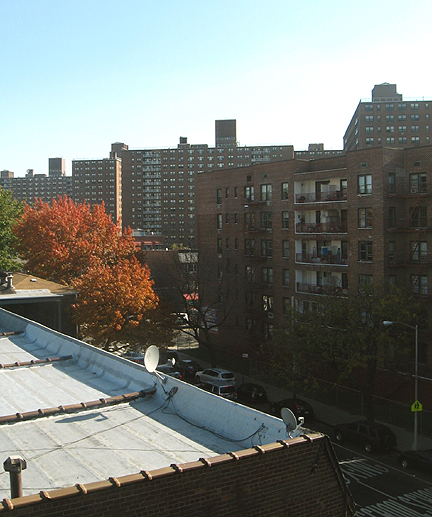 The place really looks overwhelming, crushing. Good for you for returning to come to grips with it and for finding some kind of satisfaction.

Heroic journey.
Wonderful that you made it. The benefits will last a lifetime.

Wow. Thanks for sharing that; I know that it must have been hard.

While it wasn't quite a housing project, I spent a good deal of my childhood in a half-burnt-down duplex with melted windows. It abutted the freeway in one of the worst parts of Sacramento, and at night I was lulled to sleep by the sounds of police chases and helicopters.

I, too, tried to complete a cathartic pilgrimmage, so imagine my surprise when I found out that the entire area had been razed and gentrified! Where naught but ugly, spray-painted concrete once grew, now carefully manicured greenery blossomed. It was extremely surreal.

But kuos to you for making the journey, and having a spirit of faith and bravery!

Wonderful essay, it touched my heart, reminding me that, although we can't always go back, we can recollect and reflect from a place more secure. Great photos, too.

Thank you for sharing this. It makes me realize just how lucky I have been to have had the childhood I did. I grew up on a ranch in the American West, so there was a lot of hard work, but the bullies were mean horses and bad-tempered bulls.

Sometimes it takes stories such as these that bring life's blessings into clear focus. Congratulations on going back and "taking the bull by the horns." You have come a long way, and I admire the person you have become despite what was obviously a rough start.

Thank you very, very much- crofter- and everyone, for these discerning comments.

Crofter- you can now see where I was heading with the 2-part essay about living history. This essay was in the making for more years than I am fully aware. And there will be an essay about bullying (indeed an accompanying theme), some time later.
Next up will be something about the road out of the neighborhood into the expanse of the city.

You are most welcome, and I look forward to making more trips with you, even through they will be vicariously.

We always carry our past with us in some shape or form, don't we?

My memories of being bullied don't seem to be quite as pervasive as perhaps yours were, but I certainly remember the days of counting only the teachers among those I could trust.

You are indeed brave and now, with these memories in a new context, moving forward and navigating the future will hopefully come with more peace.

Sending you a virtual hug.