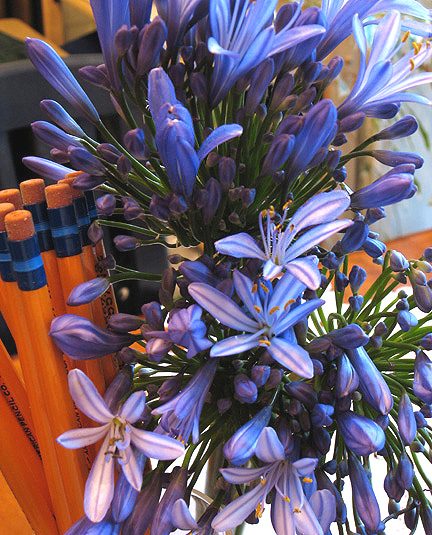 
If you don’t like how you’re feeling, change what you’re doing. That’s a fine gem of wisdom that got me through a perilously lean stretch about six years ago. Now, in times that threaten dead ends in so many directions, I am brought to remember the spirit of those words. While scavenging for hints of treasures in tired territories, I’ve noticed myself turning to trusted mentors. By the end of last week, I realized how I’d been unexpectedly visited by a variety of friends from different spheres of my life- in a nice incidental reciprocity. This made for some surprising lunch company to spice the days. Many tell me how ideally suited I am for what I do. This only contributes to my sense of unsettle, but I can at least take stock in listening to how my friends describe what they see. Indeed, simply attending to sincere perceptions helps me to interpret my context. There is always something to be derived from outside the old teapot tempests. If there are limits to my doing, there needn’t be such hindrances to my listening.

Apparently, turns in the road reveal continued desert stretches. These are without measure, and there will need to be plenty of energy to keep the pace. But, as I wrote last time, recommencing by considering blessings helps provide for a running start. From there, my thoughts have been occupied with the idea of “reprieve mindset.” Being spared a crisis leads to a catharsis of both reprieve and of a liberty to choose other points of attention. How refreshing to be able to look beyond self survival! With the grace to do so, the same old can be viewed anew. Explorations that can leap the dead-end barriers can be reading and observing with renewed vision; tasting and listening with amended senses. Beneath fixed givens, there are variables I can change. Perhaps in such reevaluation is the badge of reprieve. 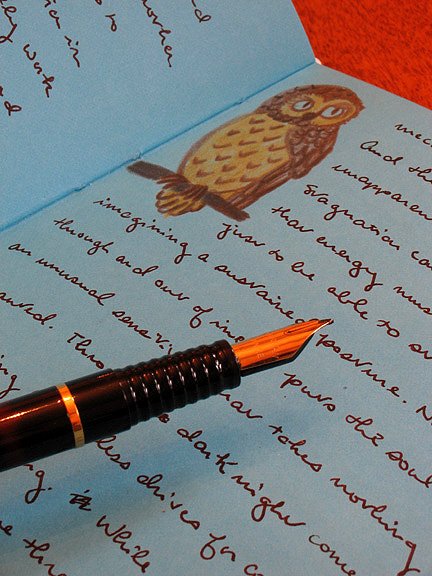 Discovering the good and constructive amidst cynical and impoverished times is an altering of local colors. Actual in the sense that a fuller spectrum of color is a reminder of vastness. Figurative in the sense that the soul must not dwell long in drab grimness. There must be references beyond genre shades, and perhaps that makes an immersion into dazzling colors something rather daring. Make note of what nourishes above and beyond times of consumptive cynicism. Though gloom and defeat, find unfettered graces. When I cannot remember God’s presence, that surely doesn’t mean I’ve been forgotten. Indeed, finding encouragement in despair is hard enough- yet I don’t give up trying to be the encouragement I seek. In this way, I can help effect my own renewal as well as be an ingredient in that of others. To bloom in the desert is to be able to vary one’s vistas, to see the flowers grow through the ruins. Locate the bright prospects- or listen for them. 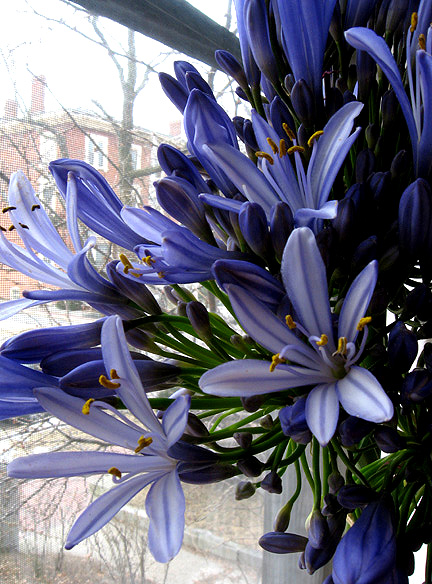 So much is made of endurance, that it becomes an end rather than a means toward something greater. Distinguishing between means and ends reveals the purpose of perseverance. It’s easy to be swept into popular perceptions of “survival” as an entire self-enclosed competition. “Hanging on” is often made into a goal. But surely the soul’s destiny is greater than any refinement of coping skills. There are higher aspirations than the sake of movement. But it seems our progress is measured by motion and amassments. I’d rather think of my journals as ships’ ledgers instead. These are testaments of perseverance, reminding me that the times demanding endurance are steps toward a sure yet unseen glory. Abilities to abide and pursue continue to hold great value- both as offerings of support and as ways to help appreciate the present. 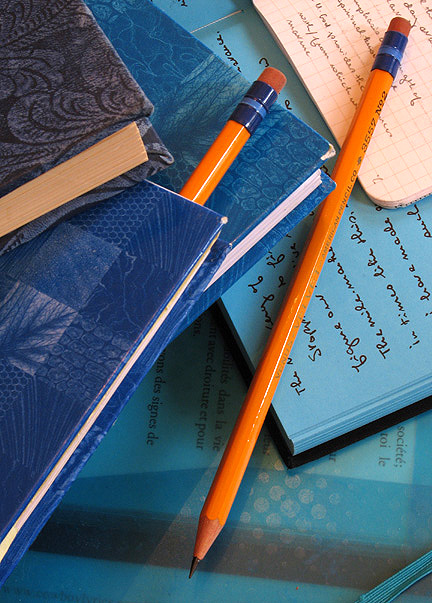 For me, to resolutely continue mustn’t be of the gritted teeth variety, but with expectant hope. There is a fine splitting-off between reluctant tolerance and making the best of things. Again, means and ends are distinct. Neither should be exclusive of the other, and both are necessary reminders for each other. Contemplative prayer seems to be both, and it causes me to wonder at praying for guidance (asking for means), given the limited aspects of distance vision. Yet I wouldn’t dream of ceasing to do so.

The indefinite soul and the finite earthbound self interlock as mysterious counterparts. It is necessarily so. Duns Scotus boldly differed from Aquinas when he asserted that soul and body are united for the sake of the soul’s highest aspirations. Creativity is manifested in the composite being. We gaze heavenward, with feet on the ground. The long road does have its consolations and treasures- with diligent navigation, these are continually revealed. This week’s humble example joined two small finds to the sum of an inward grin: an old Boston Globe that was used to interleave some ancient volumes opened to an ad for “Blue Band” pencils. Then, in a later, unrelated circumstance I found a box of these- which must have been made close to the 1929 date of the newspaper fragment. Artifacts from the Great Depression era, yet so scrupulously produced. Small treasures to remind me of my conduits. Inevitably if the ends are as yet imperceptible, perhaps the means can be enjoyable. In a similar sense, I don’t journal with a final entry in mind. 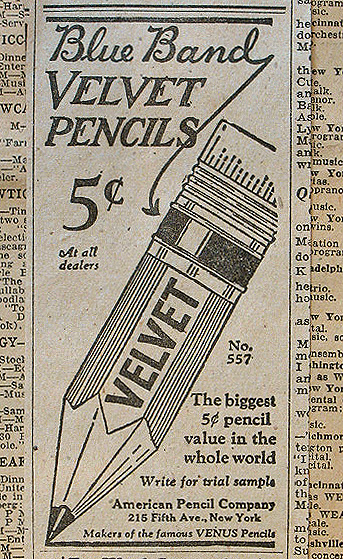 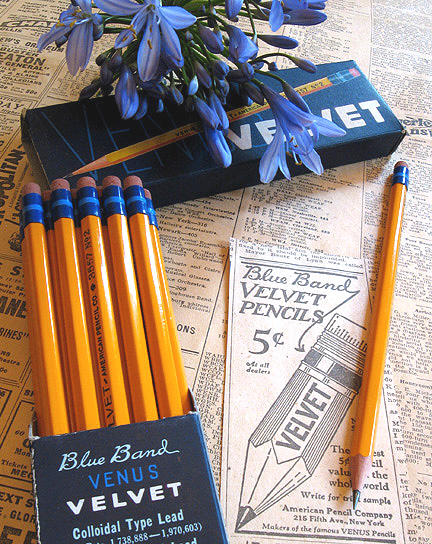 Posted by speculator at 2:37 PM

"If you don’t like how you’re feeling, change what you’re doing." - that is good advice but it's not quite easy to digest into my brain without feeling that downward emotion when I'm in a bad mood. But I'll try to remind myself, from time to time

Thank you for your beautifully written posts. Regarding your Venus Velvet Blue Band pencils, the plastic ferrules indicate that they are from the World War II era, when the metal usually used for ferrules was shifted to the war effort.

Oh Speculator, the flowers are gorgeous! Where did you find those at this time of year? I am greatly missing spring, how I wish I could smell them!

Of all of your posts, I think this one has resonated most deeply within me. Especially this part-

"Though gloom and defeat, find unfettered graces. When I cannot remember God’s presence, that surely doesn’t mean I’ve been forgotten. Indeed, finding encouragement in despair is hard enough- yet I don’t give up trying to be the encouragement I seek. In this way, I can help effect my own renewal as well as be an ingredient in that of others. To bloom in the desert is to be able to vary one’s vistas, to see the flowers grow through the ruins. Locate the bright prospects- or listen for them."

That is right where I find myself at this moment in time. I need to remember to be the encouragement I seek. Thank you for this wonderful reminder!