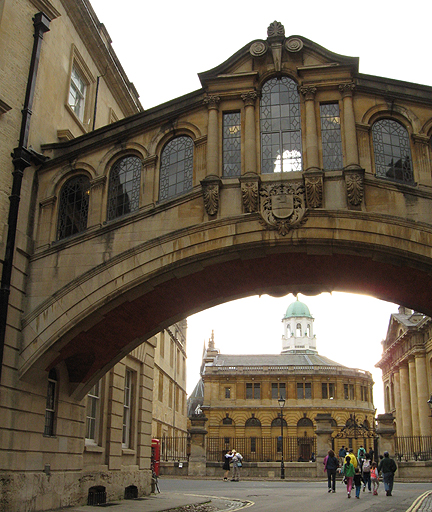 "What I owe to them is incalculable."

~ C. S. Lewis, referring to his circle of writing friends
known as The Inklings.

Many of us are aware of how the pursuit of one accomplishment becomes a varied set of added appealing themes. On lesser occasions these are obstacles; in better circumstances serendipity abounds. This recent sojourn was surely the latter. My experience as a C. S. Lewis Scholar-in-Residence at Oxford invariably put me in contact with the legacy of Lewis’ literary circle called The Inklings. The name refers to a small group of writers brought together at Oxford, and with common interests in philosophy, ancient folklore, scholarship, and spiritual life. Principle members C. S. Lewis, J. R. R. Tolkien, Charles Williams, Hugo Dyson, and Owen Barfield were accompanied by Lewis’ brother Warnie (Warren Lewis), and Tolkien’s son Christopher, among others. The group met regularly, often at Lewis’ teaching and office space at Magdalen College, and at their favorite pub called The Eagle and Child, which was at the center of Oxford. An informal though closely-knit fellowship, the Inklings would share their works in progress and enjoy spirited discussions. These collegial friends each had their own writing interests, and walked, talked, and dined together. 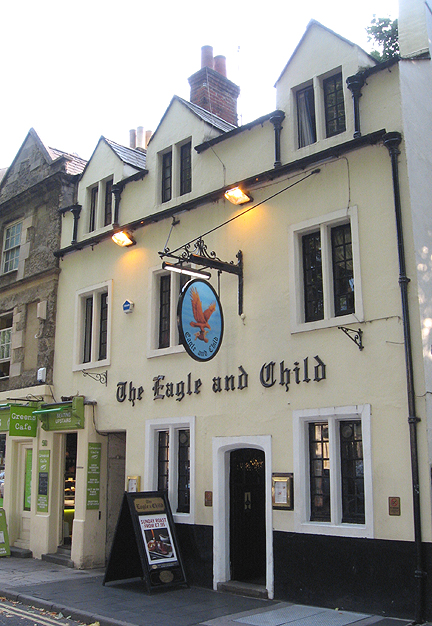 Above: The Eagle and Child, Oxford. 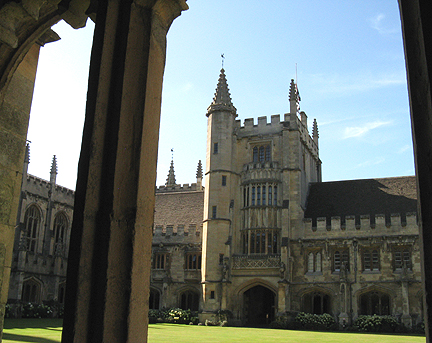 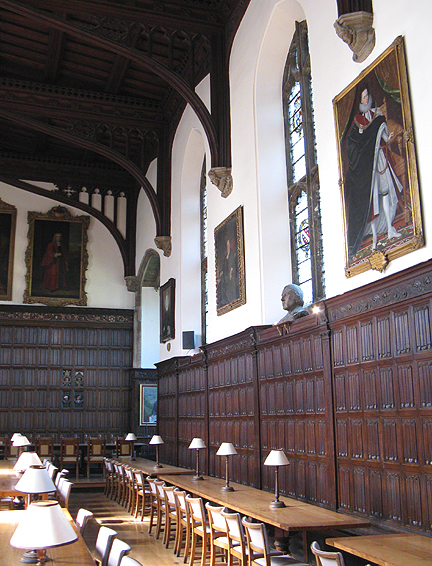 Because I had learning projects of my own, at the University, my reminders about the significance of the places and paths of my sojourn were intermittent. Past, present, and looking forward intertwined. The combination of absorbing my amazement in these places, with an overlapping of new personal experience, actually diverted me from any stifling intimidation. Having tasks-at-hand in a living environment brought interaction into what might have been static spectatorship. The practitioner’s spirit within compels me to convert observation into participation. 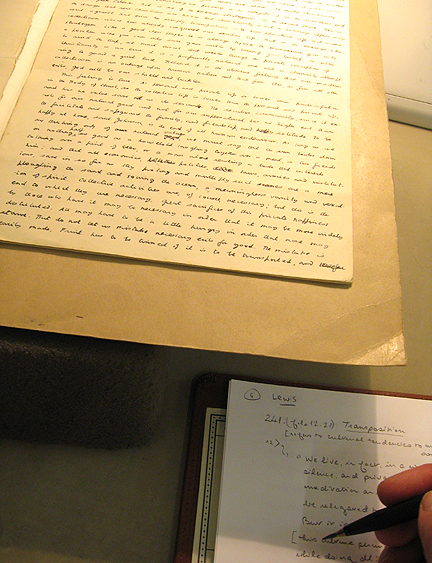 Above: Studying C. S. Lewis' manuscripts.
Below: The Kilns. 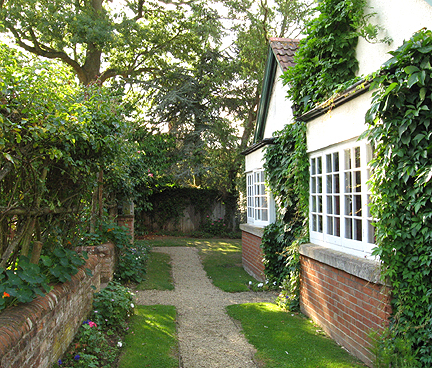 Living in Lewis’ home, I gladly followed as many of his footsteps as possible. There are many Inkling landmarks threaded together by lanes, avenues, and cloister walks. With my own steps, I was privileged to walk the merging of Lewis’ paces with those of his colleagues. From the rooms and stairs and gardens of The Kilns, I found my way to Holy Trinity Church, each time sitting in the Lewis brothers’ pew. Closer to the house is the pond around which Tolkien and Lewis frequently strolled. 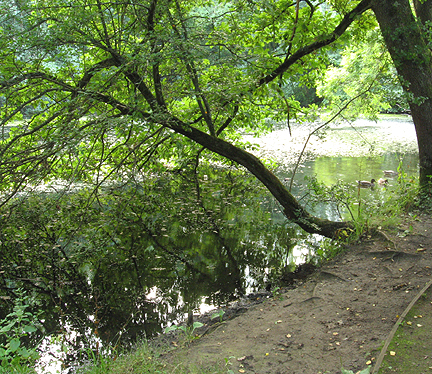 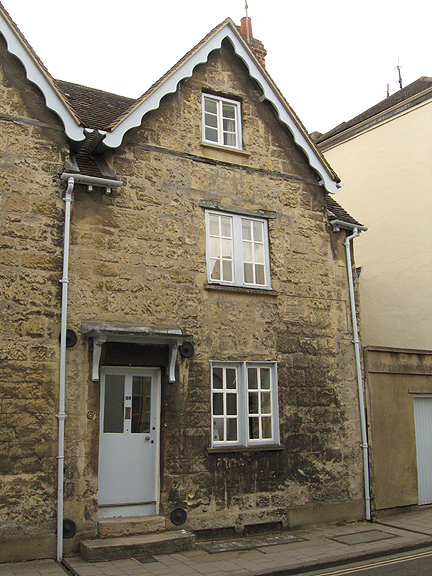 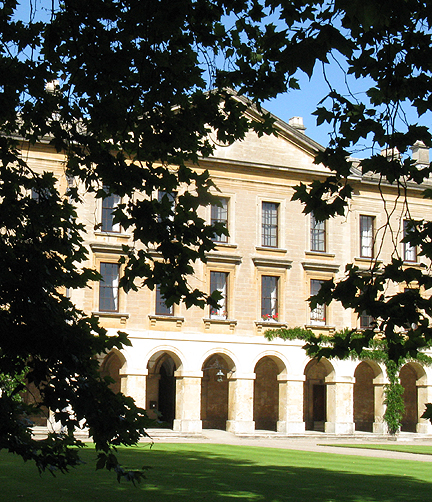 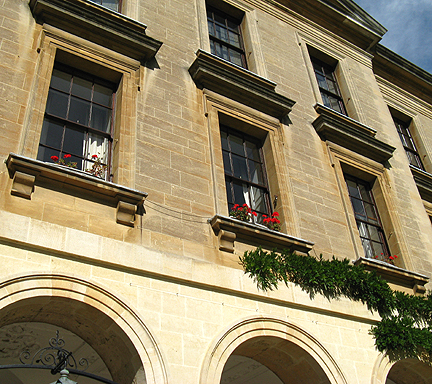 The University’s college campuses, strung together by Oxford city streets, offer most of the paths and sites shared by the Inklings. Because my studies were centered at the Bodleian Library Special Collections, my perspective emanated from the vantage points of written words and reading rooms. Indeed, the Inkling authors are present in these venues, but also at places such as Magdalen (pronounced “maud-len”), Exeter, Balliol, Keble, and University Colleges. The famous Eagle and Child pub displays memorabilia related to the Inklings, including a historic marker at their favorite table. I was sure to visit often to read, write, and feast (on their superlative fish-and-chips). The White Horse, is another tavern favored by the Inklings, and to a lesser extent The King’s Arms; both of these are close to the Library and to Blackwell’s Book Store. 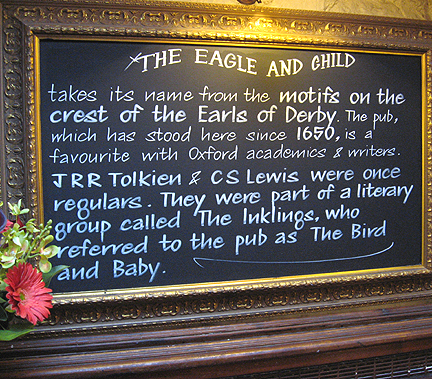 Inklings memorials decorate The Eagle and Child pub. It's a great place to write. 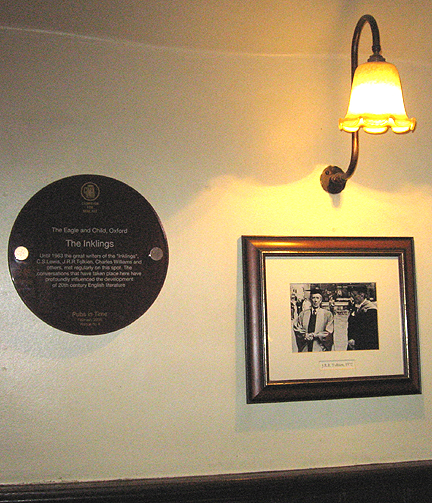 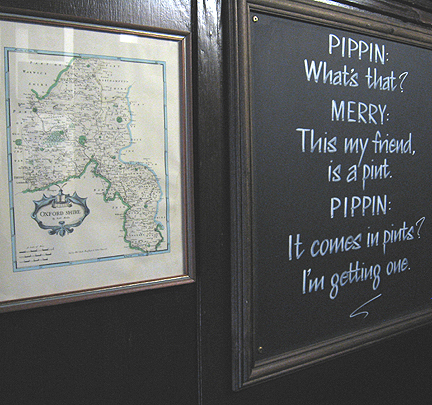 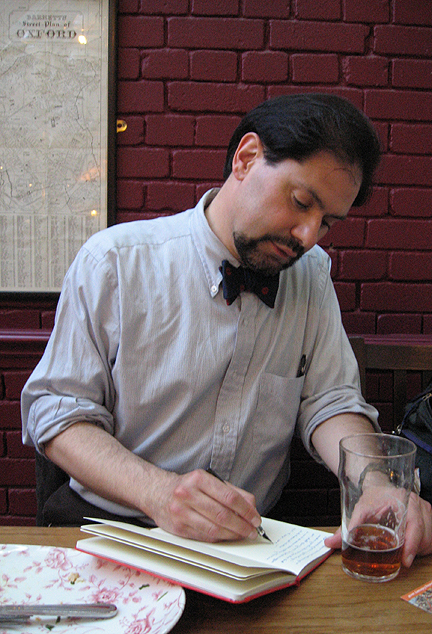 Among realms of writers, words and places intertwine. And such centers have drawn authors long before the Inkling members’ lives, and since. The chapel at Exeter College displays a memorial to Tolkien, and several blocks away in Hertford College’s chapel there is a stained-glass memorial for William Tyndale (16th century). Absorbing the ambience, listening to choirs, and participating in services at the Magdalen College Chapel, as well as at Christ Church Cathedral, crossed paths of centuries are clearly evident. 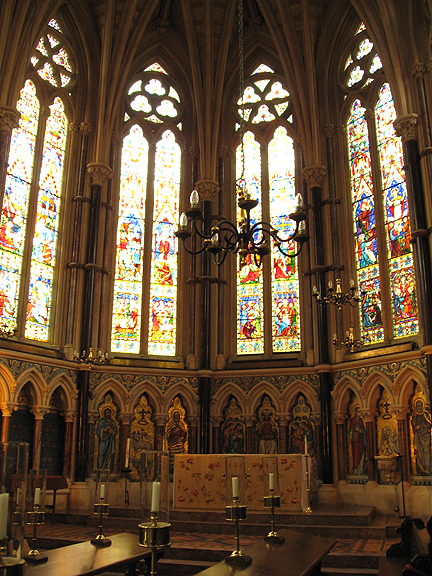 Above and below:
Exeter College Chapel, with Tolkien tribute. 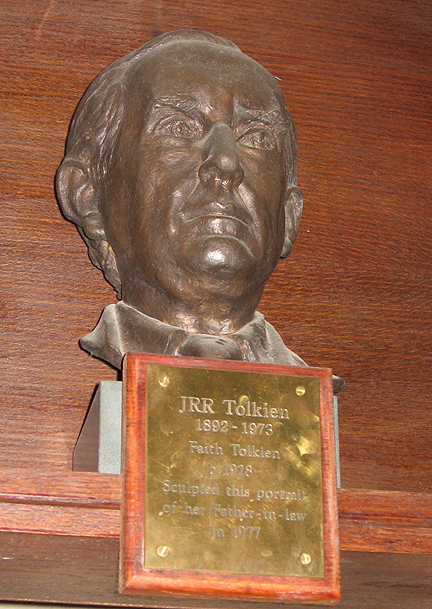 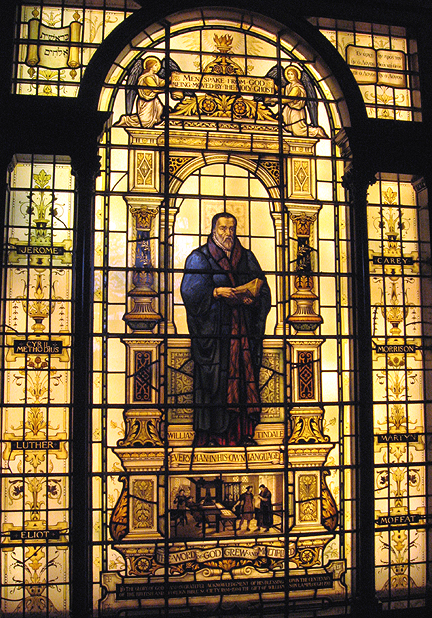 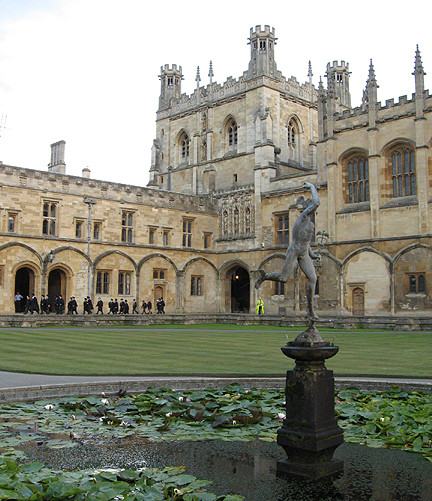 Above and below:
Christ Church Cathedral (11th century). Outdoors are the places of the long meditative and conversational walks of the Inklings (among many others through history): meadows, parks, and- for Lewis- the Headington Road which connects The Kilns with Magdalen College. Parallel to Headington Road is Lewis’ much-loved Addison’s Walk, whose eastern end is along the tree-canopied Cherwell River. A notable night stroll along Addison’s Walk on September 19th, 1931 brought Tolkien and Lewis together in a conversation about Christian faith that influenced a change in the course and emphasis of Lewis’ life. I was sure to explore Addison’s Walk, finding the poetic text written by Lewis that is displayed on a garden wall, and also navigated the Cherwell by rowboat. 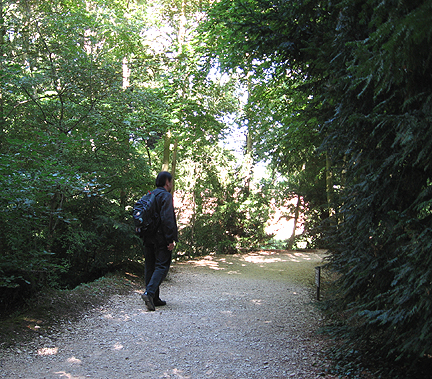 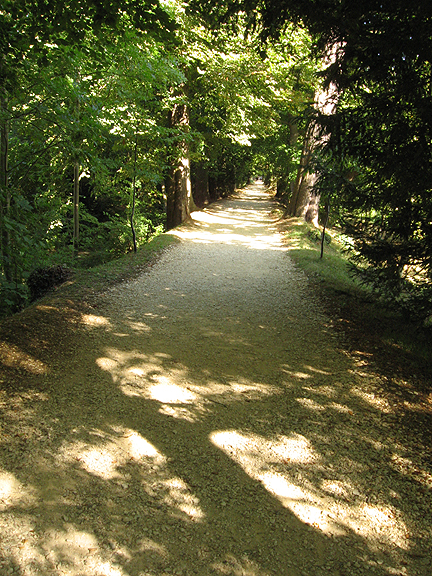 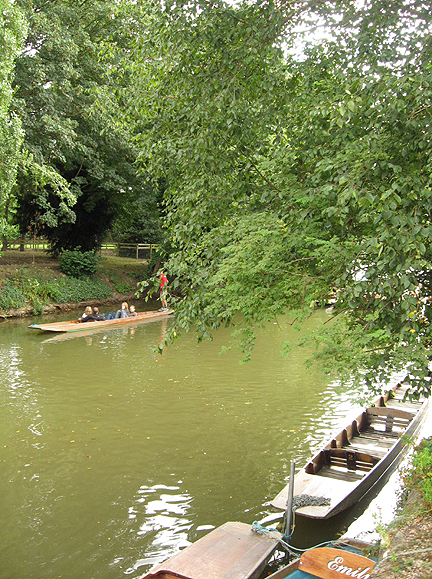 Magdalen College, and the River Cherwell. Among the many heartening aspects I learned about, while immersed in the legacy of C. S. Lewis, was his sociable personality. He donated his publishing royalties, and provided space at The Kilns for children evacuated from the London bombings during World War II. He also cherished his friends, and in the context of the Inklings, his community of kindred authors were a source of energy and inspiration for him. These writers “aired” their works in progress to one another when they met, and these gatherings were surely accompanied by great discussions. There is inestimable value and vitality in peer fellowship. 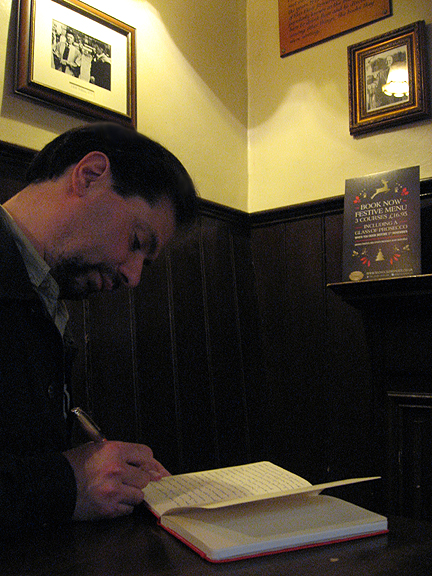 Back in the swirl of the Eagle and Child ("The Bird and Baby"), and writing with fellow scribes. 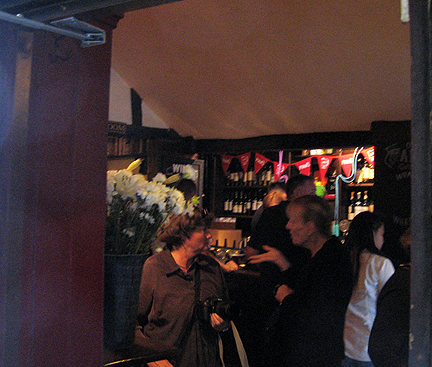 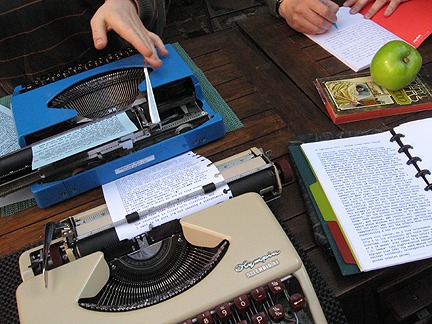 Each of the Inkling authors, pronouncedly distinct from one another, have published works and biographies well worth studying. While living at The Kilns, I began reading some of the Charles Williams and Owen Barfield books on the shelves in Lewis’ parlor. Back home in Maine, I’ve begun to gather and convene a group of kindred writers, with the Inklings in mind. We have a favorite pub, and we read from our typewriters. The dynamism of the more cohesive writing circles is shown as each member finds strength in the fellowship to continue their artistic and scholarly pursuits. The finest foundation, as it was for the Inkling members, is friendship. 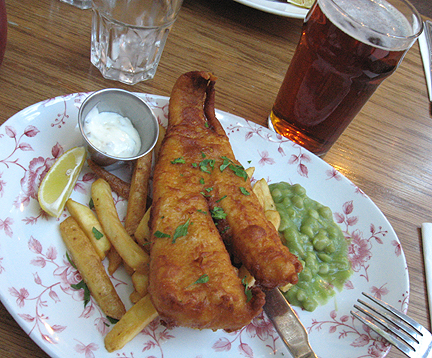 The memorable fare at The Eagle and Child;
perfect for a pilgrim scholar! 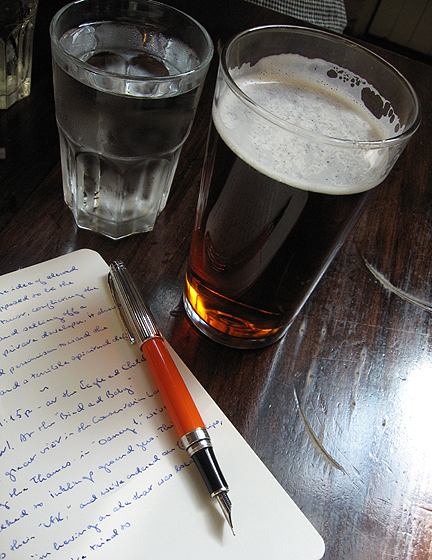 Image below from Portland, Maine
continuing the Inklings' practice. 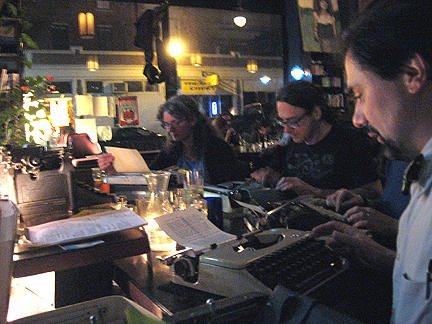 Posted by speculator at 4:39 PM

Beautiful photos of beautiful places. I really like that pipe organ.

The ambience in Oxford looks delightful.

How nice that you've begun a writer's group!

Here at WordPlay in Cincinnati, there's a group for young children called The Inklings. Photos here.

I never went to Oxford (or Cambridge) - nowhere near bright enough - but at least I can say I read your blog. It's almost like being there! I hope you can get a nice pint back in Maine?

Is that handsome red and silver fountain pen a Pelikan?

Dear Anonymous- thank you for reading!
It's a Caran d'Ache, which I had bought in England.