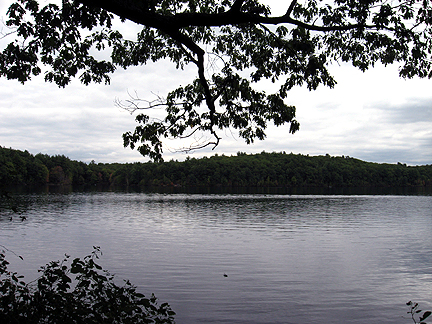 “At the same time that we are earnest to explore and learn all things,
we require that all things be mysterious and unexplorable,
that land and sea be infinitely wild, unsurveyed and
unfathomed by us because unfathomable.
We can never have enough of nature...
We need to see our own limits transgressed,
and some life pasturing freely where we never wander.”


Transitioning seasons and colder air invite me outdoors. Such liminal spans occur to me as “vignetting times,” recalling the ways I’d blend and fade edges of photographic images by vignetting exposures in the darkroom. The motions of time are clearly visible now, and the elements call me away from my confines. Driving winding back roads and hiking forests and shores, early-autumn shows resemblances to early-spring. The draw of creation combines with a welcome: a rarified sense of belonging so elusive in society. The thicker the clouds, the more evident the embrace. Proximity with a long view.

To be welcomed is to be received: to be recognized and blended into an environment. When is welcome transformative? Ponder the occasions when you’ve experienced a mutual acceptance with others- perhaps even in your prayers. Thinking of my sojourns in monastic communities brings to mind what can happen when individuals pursue lives that welcome one another’s presence. With this mindset, I’ve seen how such discipline and conscientiousness also translates as a perception that considers the self and others as part of a greater entirety. Those experiences of learning by example have strongly influenced my view and practice of friendship and collegiality. And being well-acquainted with times during which welcomes have been elusive, I keep an eye out for those who themselves experience unwelcome. This has been done for me, as well, and such rare generosity is impossible to forget. On his ascent of Mount Katahdin in 1846, Henry David Thoreau experienced a silently profound welcome by the Maine wilderness itself. Not a greeting campfire, nor groups of travellers; “no face welcomed us but the fine fantastic sprays of free and happy evergreen trees, waving one above another in their ancient home.” A gracious guest responds to an invitation with reverential wonder. 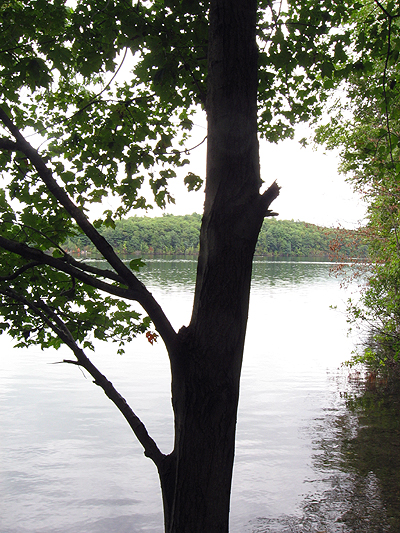 As Thoreau was welcomed by the Maine woods, so I found a quiet welcome of my own at his place. The present-day comparison between the region around Mount Katahdin and Concord, Massachusetts is surely much more pronounced than it had been 165 years ago. But somehow, despite some long-established encroachment emanating from greater Boston, the Walden Pond area is surprisingly serene. I didn’t expect that. Even the markers corresponding to Thoreau are sparing and understated. His cabin’s site is neatly marked with small granite posts and its replica is far enough away, at the entrance to the state park. On the original site, I stopped to write in my journal beside Thoreau’s hearth, looking from there to the water as he would have done. True to this vignetting season, the day was pensively overcast with cool cloud-calmed air filtering through the woods. The pond has the breadth of a small lake, and hiking its periphery on narrow paths I was treated to numerous views through gaps in the trees at the mirroring water. Very simply, my thoughts were taken up with admiring the beauty of the place. 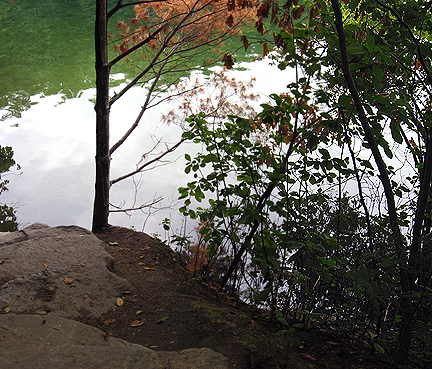 On my way to Walden Pond, I’d stopped at the Concord Public Library to see Thoreau’s manuscripts. There, in the archives, I was able to see Thoreau’s own depth survey of Walden Pond, the maps he created of contiguous regions, and his original handwritten essays. Not to be missed, I asked to see pencils made at the innovative and illustrious Thoreau pencil factory. Though he found his greatest inspirations in natural environments and the wilderness, Thoreau was technologically savvy. He discovered ways to streamline the production of pencils by blending clay with locally-mined graphite. Thoreau’s technique was enormously successful. He even worked out methods of mixing the clay and graphite such that degrees (from 1 to 4) of hardness/softness in pencils could meet consumers’ needs. As a side-note Charles Thomas Jackson, geologist to the State of Maine (and brother-in-law of Ralph Waldo Emerson) used Thoreau pencils to write his surveys- which included Mount Katahdin. 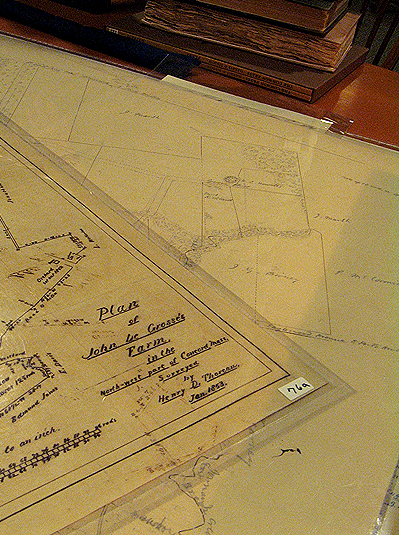 Above: some of Thoreau's land surveys.
(I wasn't permitted to photograph his prose manuscripts.)

Below: the Concord archivist displays a Thoreau pencil,
which has a squared graphite rod inside the cedar casing. 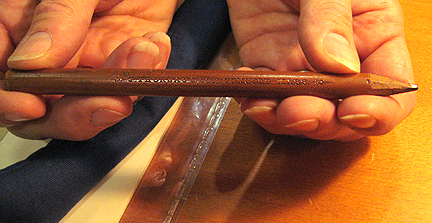 As captivating as the artifacts were, it was the outdoors that I really longed for. From Walden Pond, the next two days were filled with back roads, forests, and hiking. Noticing the peaks of the Berkshire Mountains, I began to wonder about the draw of the woods. Why retreat to silence and stillness? What do peaceful forests, mountains, and oceans teach us? What is concealed beyond the silence, which requires our listening? 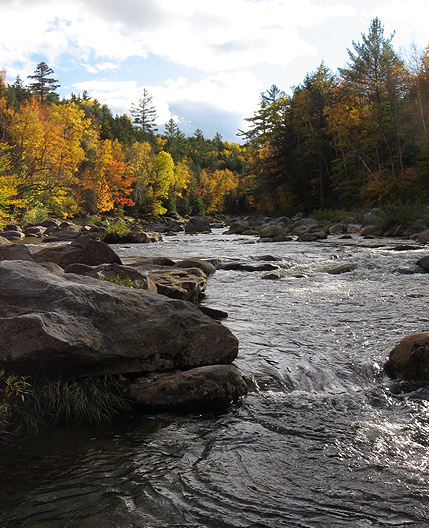 These questions returned to me, back home in Maine, while hiking a winding path near the ocean- once again under deliciously heavy skies that were ripe with rain. My answers began with recalling the state of mind I tend to have whenever I return from sojourns in the woods: a calmer and cleaner slate. Such natural elements as the woods and the ocean remind me of the vastness and variety of creation. Too often the world is reduced to a cubicle; we have to know when we can break out of the box. The draw of wilderness places may be the places and sights, but there are results which accompany us on our ways through and back, such as clarity of thought, serenity of mind, and strengthening of spirit. Just the other day, along a trail that became a deep crevasse, I stopped and looked up at the tall trees rising high above both sides. Directly above were shifting clouds. Through the composite was an audible silence, and after dining on the quiet for a good while, leaning on a boulder I wrote, “vast skies inspire raised eyes.” Sights are serendipitously unpredictable. On uneven trails, one must pay attention- sometimes with every step. I take to the trails to hear that silence; I go in order to let go. Realizing what cannot be grasped, release the grip.

Between a welcome such as that received by Thoreau, by “the glassy smoothness of the sleeping lake,” and the embraces of loved ones, profound significance and meaning are added to our days. Places and experiences to be kept close to heart. As with the maps we hold within, these are for us to reference for all our years. Drawing from a place of strength can be equally along a trail as from the soul’s depths. If the adage is true, that we read to know we’re not alone, I’ll add that I write to remember I have a voice. I’m aware of that, especially along trails- and- under those big skies, my thoughts are brought down to an assuring proportion. My perspective reveals as a bicycle wheel that needs truing- whose propensities require realignment. Looking to changing foliage and turning tides reminds me of all that is in my sights, yet beyond my control- though I am somehow part of these elements. 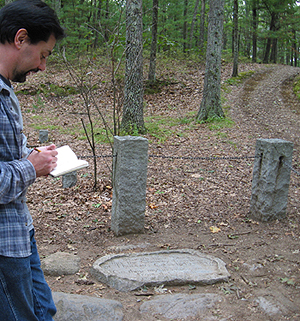 Posted by speculator at 8:28 AM

Ouhh ouhh, I've been there!!! Amazing isn't it! I found Walden Pond to be so inspiring.

I have some catching up to do. Vacations seem to go by so fast. I tried my best to get up to Boston but without a car...eh. It was so cold and rainy the last few days of my stay, just as I remember it.

I had to wait until I knew I had the right amount of peace and quiet before I began to read this post, and I am so glad that I did because in reading this I was able to slowly savor every word and every picture. How blessed you are to visit that time-honored place of silent, natural retreat!

These phrases capture my imagination: "deliciously heavy skies that were ripe with rain" and "I go in order to let go."

Abraham, as always, you have crafted a masterpiece, a mix of words and pictures to which nothing else can ever compare! Bravo and thank you so much! I am indebted to you for all of the joy that you bring to my spirit with this lovely blog!

It is good to read this beautiful and wonderful post again. I used to spend lots of time at Walden pond when I was a student living in Cambridge, Massachusetts. Many times I would go to Henry David Thoreau's log cabin site at night to feel and see what those moments had to teach me.