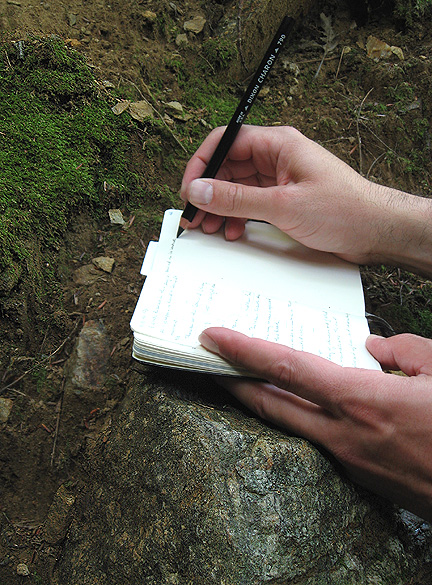 “seek, and ye shall find”


Following a good few miles of walking I stopped to write a few words, aperch on a large rock. Looking from the panoramic ocean in front of me, and down to my notebook, the dark grey textured granite caught my attention. From the massive rock, I noticed the pencil I was writing with- and saw how their tones blended together as though from the same source. I wrote in my notebook, “I am writing with the earth of which I am formed.” We write and draw our lines and marks with the colors around, beneath, and above us. Formed from this earth, we write with earth upon this life's substrata.

Not long before that moment, I’d enjoyed a day’s adventure seeking out and exploring the ancient graphite mine site at Tantiusques, Massachusetts. Parts of the treads and seams of my hiking shoes still hold traces of the unusual orange soil from the terrain. I like the reminder. When I arrived at the location of several now forested-over deep trenches, I tried to imagine how the native Nipmuc prospectors would have even thought to excavate that particular spot and not another. Simply shuffling at the ground, my feet kicked up a clay-like ferrous soil. That may have been the tip to explore further. The Nipmuc used the greasy, sticky graphite to make ceremonial paints. 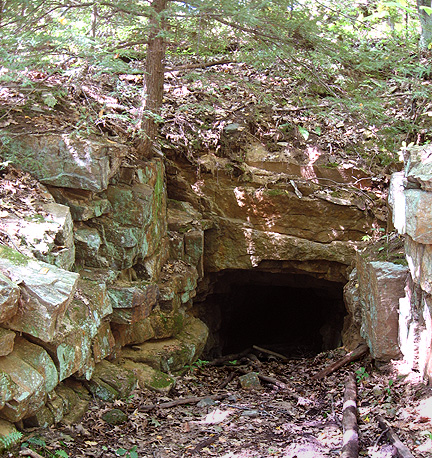 Graphite is a mineral, an allotrope of carbon (as is anthracite), and as any such material it must be mined. Forming in veins of metamorphic rock, combined with limestone deposits, graphite is identifiable by its black streaks. Its name is based on the Greek verb graphein, (“to write”) because of its use in the production of writing tools. A rarer type of graphite is its crystal form, among the world’s few non-metallic conductors of electricity.

Tantiusques, often pronounced “Tantasqua,” approximately translates as “the black deposits among the hills,” and is located in a remote area southwest of Sturbridge. The site was an ancient source of graphite long before is was shown to exploring Massachusetts colonists in the early 1630s. A few years ago, I read The Tale of Tantiusques, written by George H. Haynes in 1902. With captivated imagination, I determined to find the place. All I needed was agreeable weather and time to sojourn to an intriguing place that doesn’t appear on my way anywhere. 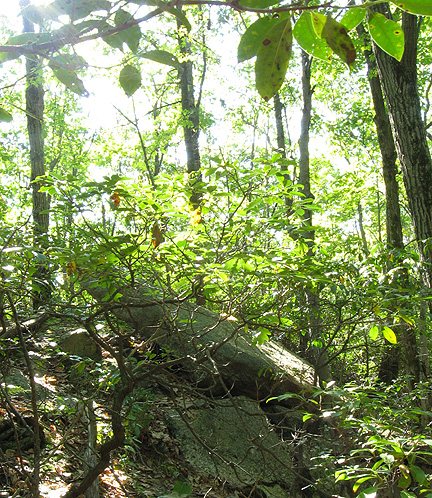 “The mine is situated in the midst of a tract of land,” wrote Haynes; “still, wild, and desolate.” Today, Tantiusques is protected by the Trustees of Reservations, and the area is near another protected area managed by the Massachusetts Division of Fisheries and Wildlife. In 1644, John Winthrop the younger, son of the Massachusetts Bay Colony’s first governor John Winthrop, purchased the mine and the area around it from the Nipmuc sachem. The agreement secured “ten miles round about the hills where the mine is thats called black lead.” Indeed, the Colonies were to supply England with the abundance of “all mynes and myneralls, aswell as royall mynes of gould and silver,” as we read in the records from the 17th century.

Winthrop’s goal was to raise as much as 30 tons of graphite from the mine, and he also hoped to find silver. As Haynes wrote, “The early colonists shared the hope that El Dorado might be discovered in New England.” Briefly put, the going was very rough. Tantiusques was located in remote inland wilderness, making transportation and maintaining a labor force difficult. Winthrop’s reports attest to how the high-quality ore lay deep in small veins, “it being very difficult to get out of ye rocks, which they are forced to break with fires.” Convinced his graphite was mingled with silver- both fetching high prices in London- Winthrop brashly wrote to his Swedish shipping agent in England, the raw material was “part silver, but this you must keep as a secret and not talke to any body about it further then it is to make pencills to marke downe the Sins of the People.” Later on, a London appraiser declared, “that which you call a silver ore is almost all iron.” The Winthrop family ownership and management of Tantiusques continued until 1784. 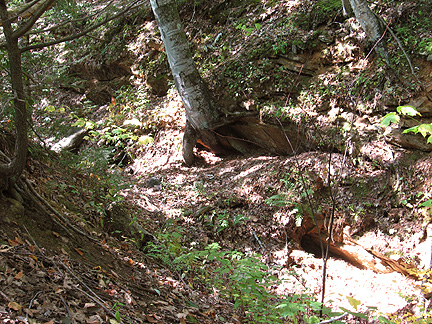 The post-Revolution and the War of 1812 evidently diverted energies from many ventures- including Tantiusques. By the time Frederick Tudor, of Boston, purchased the mine and its surrounding property just before 1830, Massachusetts became a center in the American pencil industry. Included in this region was the successful Thoreau manufacture in Concord, and graphite mines in Acton, Mass., and in contiguous southern New Hampshire. In the employ of Tudor was Capt. Joseph Dixon. At Tantiusques, Dixon and his son worked at the mine and founded the Dixon Crucible Company. Dixon was an entrepreneurial inventor who innovated a mirror-based camera viewfinder, a double-crank steam engine, methods for underwater tunneling, and a heat-resistant graphite crucible. He began his graphite enterprises, using Tantiusques graphite, in 1827, producing stove polish, foundry materials and lubricants, brake linings and bearings, non-corrosive paints, and woodcased graphite pencils. The Civil War era intensified the domestic demand for portable (and dry) writing material. Pencils became indispensible. By the early 1870s, Dixon Crucible was the world's leading graphite consumer and dealer. Pencil production reached 86,000 per day. Perhaps you are currently using Dixon pencils, which are descendants of the ancient Tantiusques mine! 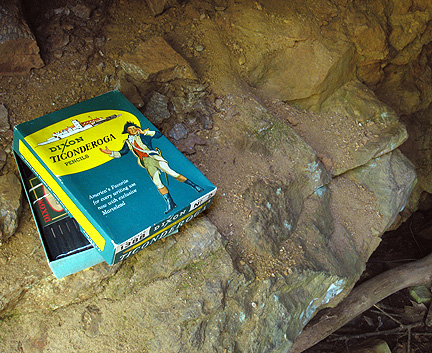 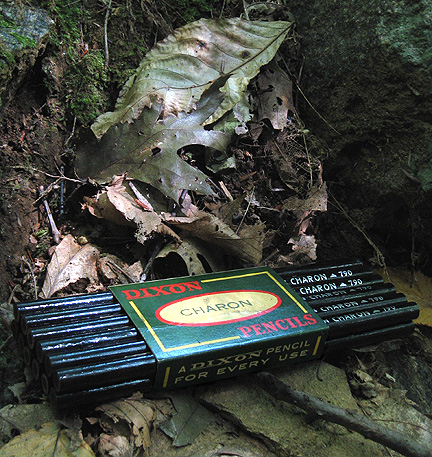 By the time Sturbridge businessman Samuel L. Thompson purchased the Tantiusques property in 1889, Dixon Crucible had been well-established in Jersey City- close to the port of New York. After Francis L. Chapin’s purchase of the property in 1893, the Massachusetts Graphite Company was organized to continue developing the area, using more modern mining methods. As Haynes reported (in the present tense) in 1902, “Prospecting has been undertaken upon other parts of the property, and one short open cut has been made in which graphite of remarkable excellence was encountered.” These were Tantiusques’ last productive years, as all mining ceased by 1910. For the preservation of the site, the next significant year was 1962 when The Trustees of Reservations acquired the land with a gift from Roger Chaffee of Worcester Polytechnic Institute, a former student of George H. Haynes (author of The Tale of Tantiusques). Finally, in 1983, the Tantiusques site was added to the National Register of Historic Places.

When Tantiusques was in full production, most of the mining had been open-trench. One of the large trenches that is still visible had been dug 1,000 feet long by up to 50 feet deep, and only 6 feet wide. Once more, Haynes’ words from 1902: “The principal vein of graphite was inclined at an angle of 70 degrees. In following it an open cut was made some 500 feet in length, from twenty to fifty feet in height, about six feet wide. This deep cut has always been a source of danger; on the thirteenth of October, 1830, the fall of a great mass of the overhanging rock crushed to death two workmen and crippled for life a third.” Standing at the bottom of the vein today presents an oddly peaceful sight. It is a lengthy and angled trench, with steep chiseled rock and trees banked high at both sides. 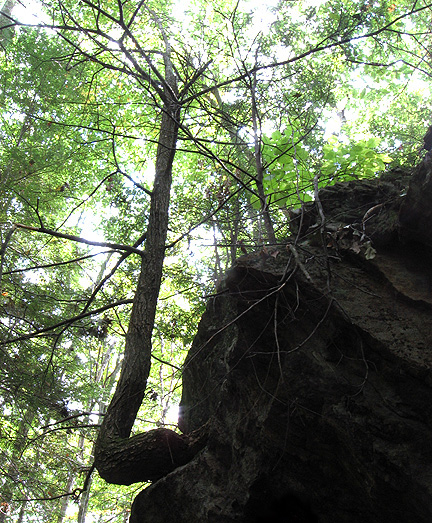 Though I could find my way to the well-concealed and winding Leadmine Road, being a seasoned New England navigator, locating the Tantiusques site took a lot of persistence. Having missed at least three rounds of mild-weather seasons, and also having dedicated the time, I would not be daunted- and that meant taking all the wrong turns in good spirits. A very worthwhile adventure, rewarded as soon as I found a mine tunnel opening. From there, some very rocky trails ascended uphill revealing high-angle views of deeply-cut trenches. Considering the mine has been extinct for a century, my enduring impressions combine tranquility with the strange beauty of the place. Verdant natural growth covers pronouncedly human-carved terrain. Near the top of the longest trench I found, I could see the pond at the incline’s base which had been the landing-point of mining debris. Today, Leadmine Pond rests silently and glistens with reflected light. 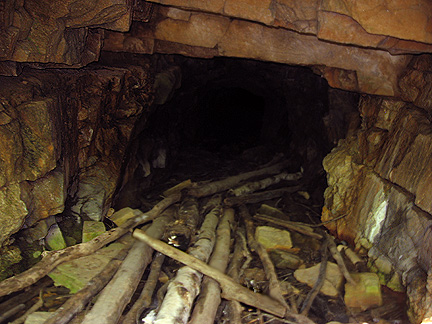 The day, filled with chilled autumn sun, amounted to a moving and fascinating experience. In a new way to see territory I know well, it became clear to me that the tools I have been using are formed of the basis that supports living beings. Seeing the mine and walking throughout its environs brought some past experiences to mind, such as jobs I’ve had in dark and subterranean confines. And my visit, years ago, to pay respects to coal miners (dissimilar as the Tantiusques site is) was close to my thoughts when I crouched into the tunnel. Yet upward to the sky vault the trees. Pondering how all things have roots, I stopped to write about my lifelong search for roots of my own; I find shreds of them in scattered places. And thus, learning about who I am, my explorations are at once upon the surface and deep within. Two very small rocks from the inside of the mine tunnel are on my desk for me to be reminded of what transforms within. As memories are scribed upon the soul, my hands continue to write the graphical record. I know that I will think of Tantiusques when the winter snows cover the seashores near my home as well as the remote woods that have reclaimed an ancient graphite mine. 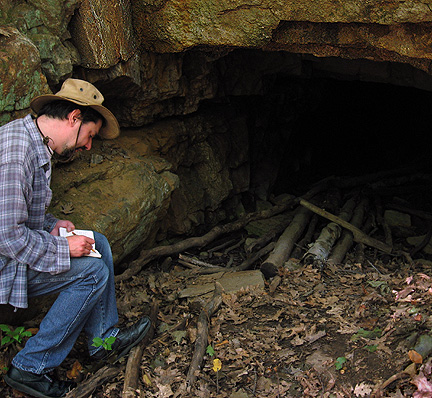 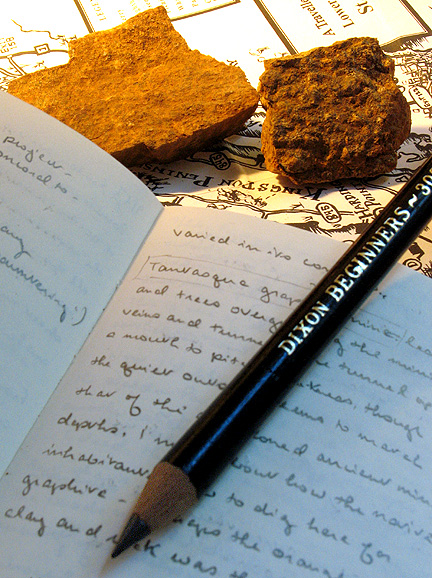 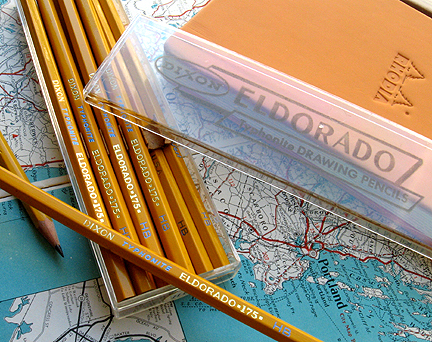 You found it! Remarkable - thank you for sharing this.

This is a great piece, thank you for writing.

My wife was listening to NPR radio yesterday, she overheard the tail end of an interview of an author whom she thinks was John Le Carre, who said that he writes his novel's manuscripts in longhand.

Absolutely superb--loved the history, the photos, your thoughts. This is one to bookmark for all time!