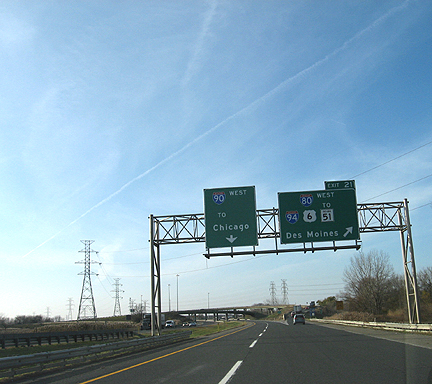 “I’ve seen by the highways on a million exit ramps
those two-legged memorials
to the laws of happenstance
waiting for four-wheeled messiahs
to take them home again;
but I am home anywhere
if You are where I am.”


It took a lot of driving for me to begin collecting my thoughts. In fact, the changes began once my wheels left New England and took to the beginning of a 400-mile stretch of the New York State Thruway, en route to Chicago. Departing the Berkshires, the terrain gradually flattened as I continued westward. A prelude to the Midwestern landscape of fields extending to horizons under seamless skies. The smooth and broadened highways appear equally limitless in their reach. Necessary stops concern paying tolls, refueling, and taking breaks- not the deficiencies of road surfaces themselves. But just as the ocean forms the sea-navigator, road adventures shape drivers and lend character to the beaten track. Traveling through unfamiliar or less-familiar places allows for an ephemeral detachment that easily finds wonder in newness. Within that are the stories of travelers, and listening to these is part of the adventure. 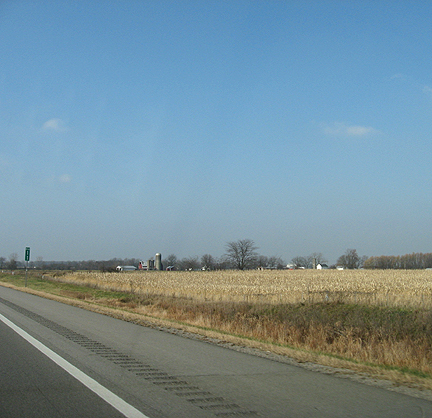 Unlike local roads and expressways, interstate highways present a truncated world. At faster speeds that tempt higher extremes, it is a fleeting milieu of ramps and signs, occasional waterways and overpasses, and names that reveal traces of regional histories. And of course, radio broadcasts that vary with the travel’s progress. Somehow, through the standardized predictability of interstates, the lure of the open road emerges. And without wanderlust, my appreciation for my home town wouldn’t be quite as strong. An appetite for travel and for changes of scenery strikes a contrast with routine. Within that contrast is the cherishing of mobility amidst a restlessness for reaching rest-stops of repose.

Compared to my northern New England roads and streets, superhighways are not endeared to me. Of course, they are purposely uniform to span the continent; that’s the idea. Roads around where I live follow the sloping bending contours of terrain and water. Interstates were blasted through rock, not to be compromised by earthbound obstructions. Many straightaways were designed to double as level ground for emergency plane landings. Perhaps tollways are exempt from our aesthetic assessments. They get us where we need to go, and back again- allowing us to do that with the least travail. In cruise control. And the sameness of the roadside stops and motels are supposed to offer a sense of comfort. Some states refer to their service plazas as “oases,” as if throughways are deserts! 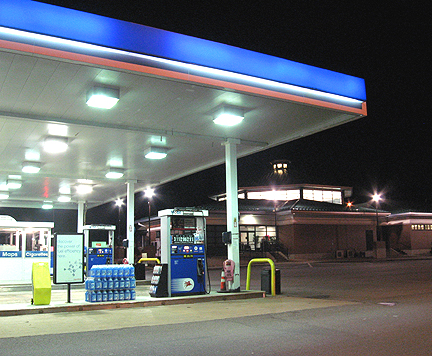 Highway systems, airports, and “intermodal terminals” remind me of how we want to cover distance as fast as humanly possible- and of how our conditions demand that we maintain the pace. It may be impossible to revert to the smaller and slower roads that traverse municipalities. Many towns have lost their cores of commerce due to sprawling development. As the larger, faster, newer, more predictable, and measurable become what is sought after, do the humbler places cease to matter? Is the memory of the unseen negated? Traversing and admiring the vast landscape on the way to Illinois, my thoughts were reminded of the many Main Streets I’ve seen when making the voyage by train. Towns and cities are bypassed by interstates, and are indicated only by sign. My vehicle is small and often solitary in the universe of thoroughfares. Fixtures and structures are few and far between. 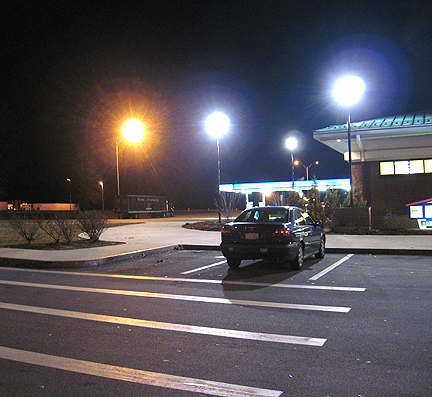 Roads and places are stories in themselves. Listening is essential. Considering the discipline of attentiveness strikes a comparison between the patience of observation and the impatience of challenging speed limits. By traveling, it is possible to meet those who have sojourned even more. Seasoned travelers like to talk, and my random survey is to ask such people about their favorite places they’ve seen. One career Merchant Marine offered a vivid description of sailing into Manila harbor. He said it was the most beautiful sight he’d seen. Walking and talking in Chicago with an 88-year-old family friend permitted a chance to bring up my continuing query. Asking Manny about his favorite places from his road sales years caused him to re-enact his recollections for my listening ears. Now I have his stories to reflect upon- his word pictures of roadside fields of sunflowers in North Dakota, all bright and waving to the sounds of trumpeting geese. “Just like a horn section,” he said. He told these stories slowly, as though presenting a gift to me. Manny’s sense of patience is refreshing, and his demeanor reminds me not to hurry or wish away time. The long highway trips are so much about wishing distances away. “How many more miles to...” is the pervading concern. And it will surely manifest over and again in my thoughts, in drives to cover as much distance as possible- hoping to rest later.


Being able to reflect back upon travels and holidays indicates the advance of time and age. My elderly friend encourages me about how most of my years are ahead of me. Now I wouldn’t dare deny such encouragement to someone who is 88! I mustn’t let the advance of time become an excuse for pessimism. It is a fact of living. Remember that as students we are supposed to graduate; that is the goal of formal education. Thus, if one aspires to graduate, it is effectively a wish to mature and grow into the pilgrimage. 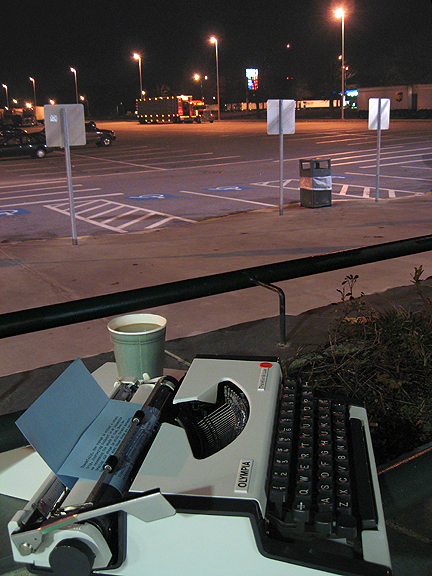 In my wonder at the ways faraway points may be connected by navigating highways, routes, tracks, and paths, the road begins to represent hopeful ways forward. Journeying becomes a tangible exercise that observes distance, difference, and proportion. As such, sojourning is essential for a life of learning and understanding. But at the same time, it’s something of an invitation to displacement. Consider hiking and camping. It forces the issues of how to be equipped, how not to be equipped, and what must be done without. But the venturing is pursued by many of us, even enjoying the simplified limitations- which permit for exploration. Indeed, there is spiritual geography as surely as geography may be part of spiritual practice. 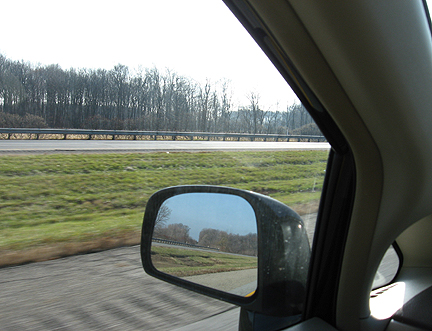 Returning east a couple of days ago presented the resuming of mountains, valleys, and at last the mist of Casco Bay. On the way, I thought further about the “hopefulness of the road,” and what that signifies. It’s a present hope for what is too distant to see right now. As well, it is an advancement forth from what is past. Taking to the road is an act of trust in the destination, the means of transport, and of navigation. The vehicle has what it requires to get there, and my understanding of the roads and my sense of direction are sufficient. Even the desire to go forth is an engine in itself. With movement there follows motivation. And in launching out of the onramp, even into the night and across boundaries, the hope of the road endures. 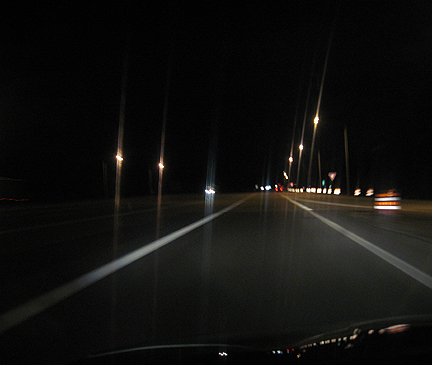 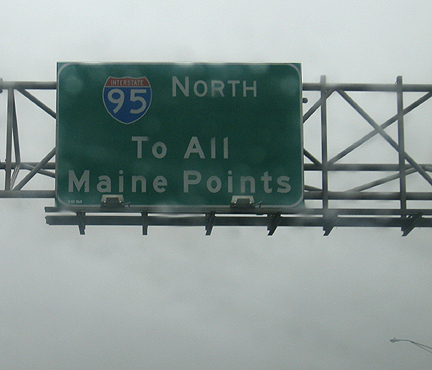 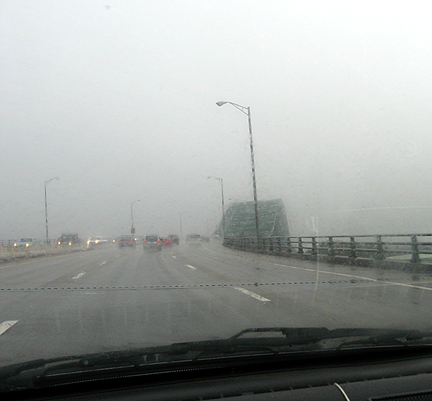 Great story! I love the part about your friend Manny and his gift to you of his story. That's a treasure!

Next year when you travel to the midwest, you'll have to give me a heads up, maybe we can meet for coffee!

A blessed Advent to you!

*Sighs* the Mass Pike, 95 South, it hasn't been that long yet it seems so long.

I love being on the road.

Many things I liked about this post. The typewriter at the rest stop, the perspective on the passage of time. Comforting words. Indeed we are often wishing distances (and time) away to our detriment.