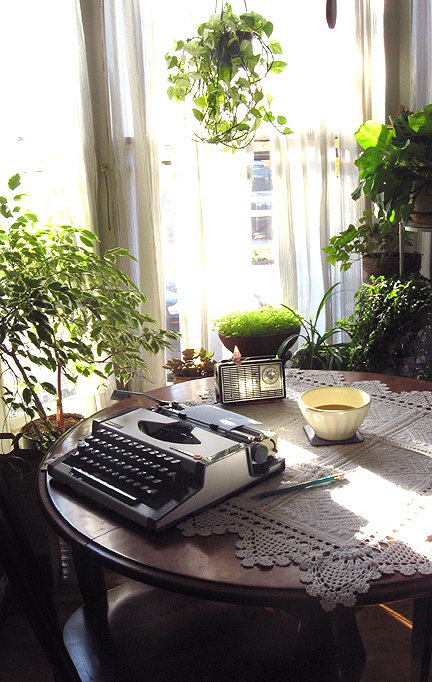 
When welcoming a houseguest, I try to share as much of my living space as possible. For most of my adult life, I lived in 2 ½ rooms. More books meant less furniture, but it was always neat and tidy. Guests always got the room with the bed surrounded by bookshelves, and I’d take the dining area. Recently with a visiting family member, I followed the same custom of creating a welcoming space. Yesterday, I thought of how monastic houses balance shared and private spaces. I remembered how the common spaces are entered and passed through, with a warm sense of deference. I set aside the morning essentials from off my desk, before bidding my guest goodnight. Early the following day, I noticed myself quietly camped on my livingroom floor, with coffee, journal- and radio. The always-faithful wireless: iconic and useful, with the ready steadfastness of a portable typewriter. Radio often reminds me of who I am and what I am. I comprehend, therefore I interact with this world. With selections and references of my own, I listen. 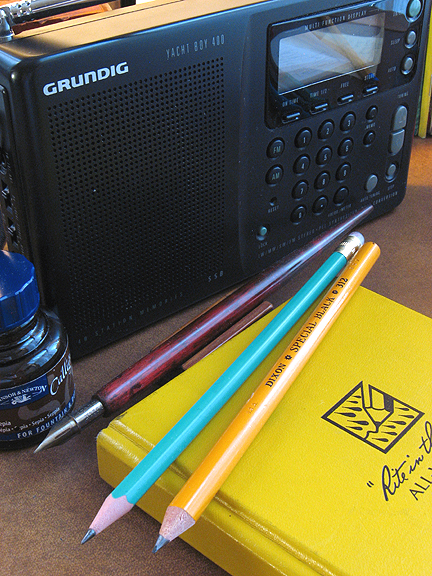 Despite all the scientific explanations, the very idea of radio signal reception remains magical to me. The little rectangular box usually perched on my desk can be dialed to faraway broadcasts transmitted through the air. On shortwave, sounds from continents away visit my writing surface. So much is conveyed with seemingly very little. The little box of batteries, numbered dials, speaker, and transistors accompanies me around the house- and out on the front stoop. Radio retains many of its time-honored attributes, and is still somehow an intimate form of media. The operas, the pop tunes, the narratives, the cheering fans, and the chimes of Big Ben (at the top of each hour)- all mingle in the stratosphere.

My mother likes to humorously point out how we tend to look at the radio as we listen. We gather around the sounds that visit our habitations. Long predating the Web, radio is freely accessible 24 hours a day. Live programming is immediate, and does not require reloading a page. Commercials can be turned down. The best sportscasters are assigned to radio, which is only as effective as the human ability to articulate is successful. Intrinsically neutral, the broadcast medium presents both troubling and calming voices. The format lends itself to use and misuse. We can engage the airwaves to find what speaks to our sensibilities. 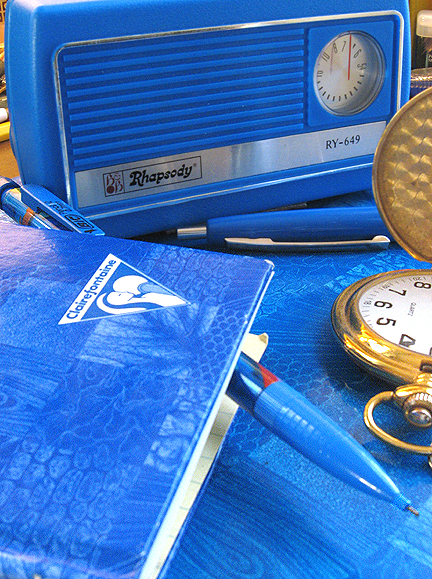 
Beyond the radio as an object, it is a subject replete with profound connotations. As an archivist, cataloguing a manuscript requires that I describe the item as well as the subjects pertaining to the item. What does the object mean? Radio broadcasts are accessible through other avenues, along with traditional receivers. A few years ago, during an immense blizzard in Vermont, I stopped at an inn for a break from my treacherous drive. The British innkeepers had no guests that day, and served tea while nostalgically recalling their beloved BBC. I showed them how they could listen through their computer. In their ecstatic gratitude, they offered me a place for the night- and moved their desk computer to where they could listen to the “Beeb” with their tea. Radio is still radio. A vacuum-tube Marconi from the 1930s can bring you next year’s World Series.

Radio listening has an inherent time-travel aspect. Not simply via music and archival rebroadcasts (both sources of enormous wealth), but also in current programmes in a style of another time. Mystery Theater and Twilight Zone Radio represent new manifestations of a long tradition of thrillers in the “theater of the mind.” National Public Radio’s lively quiz shows and the much-loved Prairie Home Companion endure with off-the-cuff literary wit that has long-since disappeared from television. New Englanders are regularly regaled by the seasoned voices of Jordan Rich (WBZ), and Steve LeVeille (also WBZ)- both of whom are endeared to their countless listeners. They represent a demeanor from an era that fused spontaneity, directness, and a high regard for decorum. Rare and not shrill. Encouraging and not alarmist. Good listening is an exercise of memory, as well as an understanding of significance. Weighing ideas is an opening to interpret the world. The spoken word without pictorial footage lends well to imagination. An amusing juxtaposition would occur during early-morning commutes in rural Maine, during which I could pick up frenetic Boston traffic reports. Turning off the sound, I’d glance again at the dairy farms and pastures around me. Truly, the newswatch never stops, and radio reminds me to remain awake to the present, reference the past, and participate in life’s developing story. Always making notes- mental and otherwise, I continue to collect words, sounds, and anecdotes. 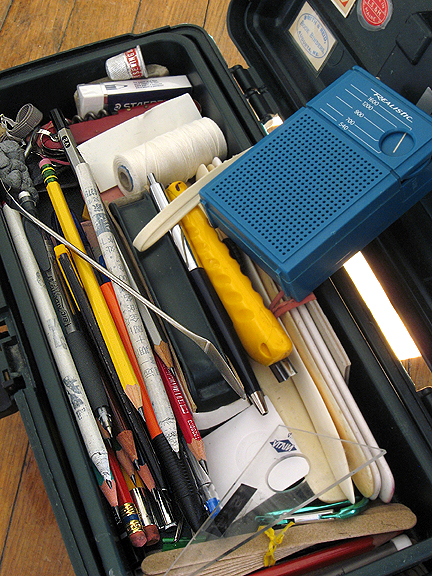 As personal essentials are determined, it is easier to know what travels along. Radio goes with me on every major travel, be it in or out of the country. With every locality, there is always something to listen to, reminding me of where I am. In Europe, it’s a cornucopia of languages. On returns from cross-country road trips, I move across NPR (or Radio Canada) affiliates, until I get within range of my New England favorites. Familiarity comes by sound and cadence. Radio has accompanied me at all my jobs, studios, apartments, cars, and has echoed through every darkroom I’ve worked in. It is a medium without moorings. Being a postmodern, radio has always had a suggestion of being something a bit antiquated. As a teen, my parents offered to give me a television of my own. To their surprise, I gratefully said no, and asked for a table radio instead. I still have it, and the sound is as rich as ever. After one of his enthralling monologues, I wrote a letter to Gene Burns- with a matted landscape I printed for him- to say thank you. I told him that his programme was something of a graduate education in the liberal arts. He wrote a memorable letter back to me. Assuredly, my life’s influences include some of those golden voices inspiring worlds of words and oration. To be immersed in depths of musical and verbal sounds also inspires a life of listening. 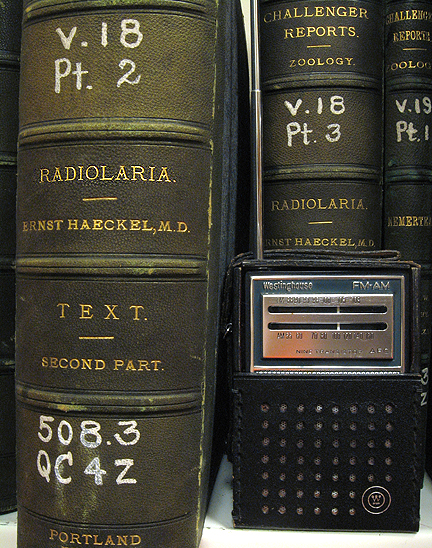 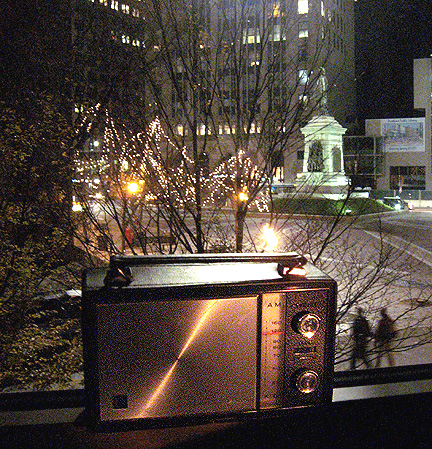 “Hello, Mr. Radio, you friendly station,
So glad of your company, your morning music...
Your voice comes riding home across the air,
You travel 'round the world, but still you're here”.

Posted by speculator at 9:27 AM

This is a wonderful post. I've enjoyed radio since my childhood days. Shortwave I like, although I must confess I haven't listened as of late. I remember hearing the irreverent radio preacher Gene Scott, whose reruns are still being broadcast on shortwave. I like the English language foreign broadcasts.

I liked Radio Moscow, back during the Cold War, just as a counterpoint to the domestic propaganda.

Lately, I've grown weary of talk radio of the conservative ilk, less because of philosophical differences and more to do with rudeness of the usual radio host, and lack of general politeness toward callers of alternative perspectives.

I've listened occasionally to Rachael Maddow on Air America, and you can tell it's a cable TV show being rebroadcast on radio, due to the lengthy commercial breaks.

As you are probably aware, the recent (last several decades) revival of talk radio in the US was due to a repeal of the Fairness Doctrine, permitting radio broadcasts lacking a perceived "balance" of editorial positions to thrive. There has been talk recently of reinstating the Fairness Doctrine; as usual, the talk show mavens are up in arms about this.

NPR and especially Prairie Home Companion are welcome guests in my home. Radio is a true window on the world. I like BBC, Radio Deusche Welle, and the english language broadcasts on Japan's national station.

Thank you for this reminder of the magic of radio.

BTW, I like the images from your radio collection.

Well said, Spec. I myself always turn on the radio whenever I want to feel connected to the world in an immediate way. The internet is all well and good, but there is something more alive in the sounds that you hear coming from your car or home theater or desk speakers. Some kind of immediacy, I guess, knowing that the person is out there, somewhere, alive and experiencing the same moment as you. It's more satisfying to me than any TV show or web page, to be sure.

Oh, and beautiful pictures. As usual.

Seattle is fortunate to have KEXP (www.kexp.org), an independent radio station that has introduced me to many favorite bands (including the Innocence Mission) that I would otherwise never have heard.

Lovely story about the British couple and the snowy day. I could picture it.

Intrigued by the toolbox, twine, bone folders? Do archivists repair books and documents, or do they just focus on preserving information in an abstract sense? I am not familiar with the career and it sounds fascinating.

Strikethru: I'm one of those archivists that is also a trained paper/book/photo conservator.
Conservation- and preservation education- make this kind of work especially enjoyable.

Even though I recently attended a workplace lecture on "How a radio works", I can't disagree with your sense of wonder.

I've also marveled at "skip", as I think they used to call it. Even though Toronto has major stations at 1010 and 1050, in the middle of a summer night, you could somehow pick up a Boston station at 1030!

Like Joe, I also remember shortwave, and recall as a teenager stringing antennas parallel to the backyard laundry lines. BBC, Radio Moscow, VOA, the time signals, and that ever present evangelical station in Quito, Ecuador!

Great post! I remember the old CBS Radio Mystery Theater that was still on the radio in the mid 1970's. I enjoyed listening to it in my room with the windows open and the lights off. I still listen to radio some, usually "lite-rock" and the occasional episode of Prairie Home Companion. More often, though, I listen to Audible Books as much of today's radio is little more than noise.

I was able to relax and read through the entire piece, so well done. You capture the essence of radio from a listener's perspective...should be required reading for folks in the biz!

While I don't listen often, I do have a shortwave receiver I picked up a decade or so ago. A handful of times a year, I'll spend a couple evening scanning through frequencies and I am always excited to find out what I get tuned in to.

Oooh, so glad the typewriter pictures post led to this -- I like radios just as much as typewriters. In the last few years I've gotten obsessed with old time radio, so much of what I listen to now is streaming (I love those internet streaming radios). But I still keep a Sony ICF-SW7600GR in the nightstand to browse around with at night. (And a Select-A-Tenna for AM!)