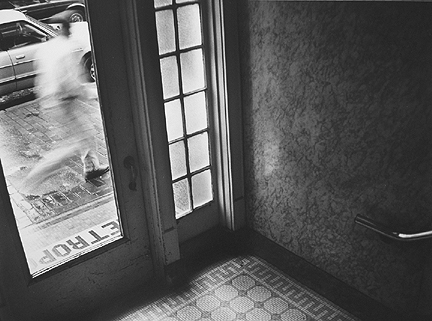 ("It was the things said quite at random that, bit by bit, explained everything.")


I am one of those photographers who loves what we call "decisive moments;" thin slices of time that exemplify the sense of an environment. Surely the encapsulation (now tapping into my archivist’s language) of a situation or place carries perfectly into the realm of writing. During my years of teaching photo, I’d read Dylan Thomas’ poetry to class groups, to demonstrate how a few words could so clearly expose and develop an image in our imaginations. Then it would be for all of us to attach our own words to the images we observe. With a visual orientation, we can easily interchange imagery and words; both can be woven into the fine archive in our hearts, but perhaps none so much as a vivid image of a brilliant moment.


A fleeting moment is what ironically (as is my tendency) brought the very vitality of transitory moments to mind. Lately finding that I struggled for some recollective time in the midst of constantly darting between responsibilities, valuable as they are, I unwittingly sought to make the most out of little intermissions amidst tasks and en route. Sitting outdoors on coffee breaks with notebook and pencil, indeed far enough away from the sidewalk smokers. Then the other day I found myself leaving unusually early for an personal errand to allow for some reflective time to write (or as I always say, perch); that would be my reward for such diligent industriousness. The photo, below, taken at Big Sky Bakery accompanied a gratefully received moment. The spectrum comprised the aroma of the roasted beverage and cinnamon, the sounds of conversing workers and patrons, the sharp early light of August coming through the exterior trafficked street, and me within this scene: stillness amidst perpetual motion, and solace that I could luxuriate without worrying about exactly what time it was. It was even possible to draw in some gratifying breaths.


And there’s a thought- to consider how many artistic and spiritual practices are commenced with the intentional and mindful act of breathing. As if this was something for which we need to buy a ticket to do! When a camera shutter snaps, there is a pause before the next frame. When I have to sharpen a pencil, or re-ink a pen, that is part of the syntax of reflective writing. Those pauses are integral. Imagine a commercial break without commercials. In typography we referred to the spaces between type and graphic elements as counterforms, all of which define what is in their context. With a moment, there is a chance to ponder what has brought us to this very stroke of time and to consider why it means enough to cause us to stop action.


The other day, I recounted what became an indelible moment, because of what I saw and what I perceived yet did not see. On a day during an unusually snowy winter, wanting to be a considerate gentleman, I offered to shovel out a formidable sidewalk and driveway for two women who lived nearby. There was a lot of snow, piled very high, and I got through it all and cleared the way for pedestrians and vehicles. It took time, and was rather exhausting. Trudging up all the stairs to announce the job all done, left for me on their sunlit dining table I saw the very picture of profound gratitude. Brilliant light accentuated by abundant snow outside, the wide bright table supported a small teacup filled with coffee, accompanied by a measuring spoon filled with milk. Such extravagance in such humble form came from people who owned neither coffee nor milk in their household, and while I was furiously outside shoveling and hefting snow they were hunting down these ingredients from their neighbors in order to present something they thought I would enjoy. It was the perfect gesture, as if the glitter of the glowing table and the steaming beverage had been gold and incense from the Magi.


Slivers of time and experience, true to their description, are just that: humble enough to be overlooked, but worthy to be savoured and drawn from. We could say that both melancholia and consolation are encountered in barely discernable moments. At once transient and abiding. Yet I am finding that transformation occurs in the twinkling of an eye, and in these liminal breathing-spaces between the forms of the day, I am hoping to perceive what is unseen, and choose a perspective that finds light in the darkness. 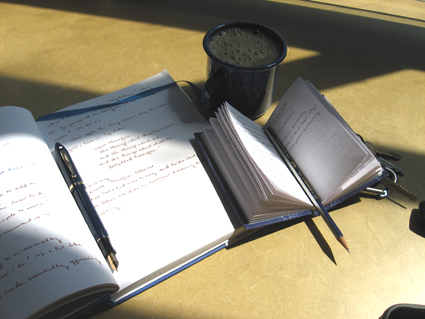 Posted by speculator at 2:18 PM

Such a holy space here... Thanks

Your post reminds me of those thin places the Celtic Christians spoke of, where Heaven meets Earth.

I have experienced a few of those thin places. I wonder how many I pass through unawares because I am not perceiving that which is unseen.

Thanks for introducing me to your blog