songs in the night 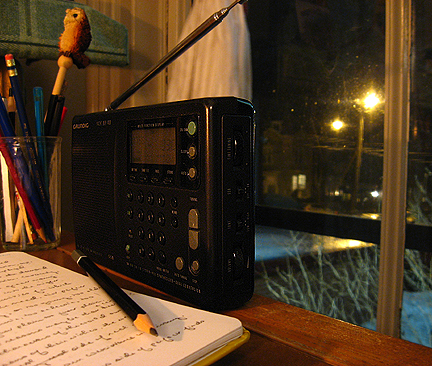 “He said within himself-
Surely, if men be tried and troubled exceedingly,
it is because, while they think about their troubles and
distress themselves about their fears, they do not say,
‘Where is God my Maker, who giveth songs in the night?’”

Winter winds have returned recollections to me that highlight reminders of many late nights ago. In the process of becoming a self-possessed high school student in the early 1980s, I developed a habit of staying awake late into the night. Being the only soul awake in the house, I’d perch at my desk with school art projects spread on the surface- with the radio nearby. The volume was kept low, out of respect, as well as to enjoy the quiet. Even New York City tones itself down very late at night. My tastes have always tended to times long preceding mine. History and depth were always understood to be intertwined. After all, une histoire means “a story,” too. Elder teachers, family members, and neighbors had the most captivating stories with matching dramatic recitative voices. Coming of age at a crossroads was somehow clear to me, and I would ponder this during my midnight musings, already longing for more warmblooded times. In the graininess of night, books, outer clothing, and satchel rested still as granite, but the radio was on. Before AM broadcasting became fully infested with political pugilists, much of the programming gave airspace to local commentators. New York’s abundant airwaves were resplendent with stories, reminiscences, and musings- in between round-the-clock news stations and music. Perhaps the older radio personalities also thought themselves at crossroads. Listening to calming tones eases the environment and creates an oasis in time. Indeed, as sound is involved, spoken and musical content must soothe, lest the frequency be changed to another station. In my farthest memories- and there still exists some of this today- I’ve enjoyed live broadcasts during which the radio hosts reflect with anecdotes, or converse with guests, or place verbal interludes among music selections, or address the audience as a counterpart. “How in the world are you?” was how King’s College president Robert A. Cook would begin each of his radio offerings. The more interesting commentators display a signature style. Some have been able to make their commercials into entertaining extensions of their shows. Art Raymond, on WEVD, would advertise sponsoring eateries and tell the audience what to order at these businesses. 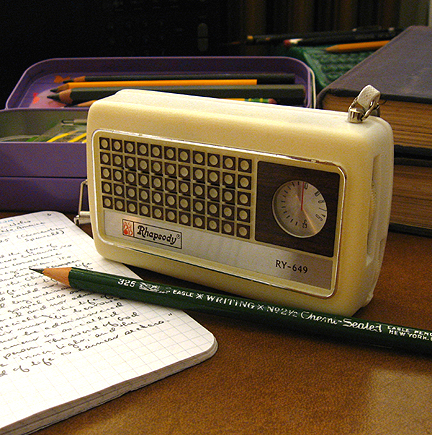 During dark and solitary hours, the earth and all its life forces continue unceasingly. I knew this from my window, at my desk, with the radio on. Such diversions are able to distract individuals away from making life’s boundaries into something as narrow as a table surface. My radio imaginings would include picturing the sources of the broadcasts. Studios are ensconced in large downtown office buildings, with announcers and technicians awake through the night hours. Some of them tell us how cold it is outside, and about traffic patterns on the roads and bridges. Through all the textbook diction, I could detect local accents. I remember how I could hear Richard Gladwell puffing on his pipe amidst gentle narratives within his classical music show. To this day, I often look at the radio while listening; perhaps many others do this, too. The gesture is similar to that of respectfully eyeing the person speaking to you. 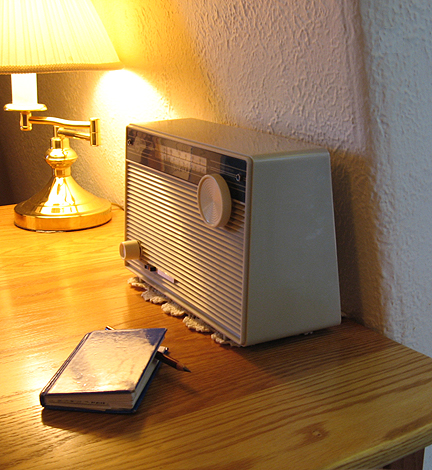 This Philips radio from France has the perfect home in my apartment, with a slanted back
that exactly matches wall's angle.

Among our treasures we find our own iconography: gifts, heirlooms, and the finds that for us mean more than their surface appearances. Indeed, material is inherently temporal, but meaning is transcendently enduring. Only through personal experience can the iconographic aspects of places, things, sounds, and even thoughts be discovered and realized. It is for each of us to comprehend meaning and grasp that which is solid in our spirits. Radio is at least as endlessly fascinating to me as it is to see a photographic image manifest in a tray of developer. Even after all these years. There are technical and scientific explanations for these processes, yet the magic of retrieving sound signals from the air exceeds rationalization. 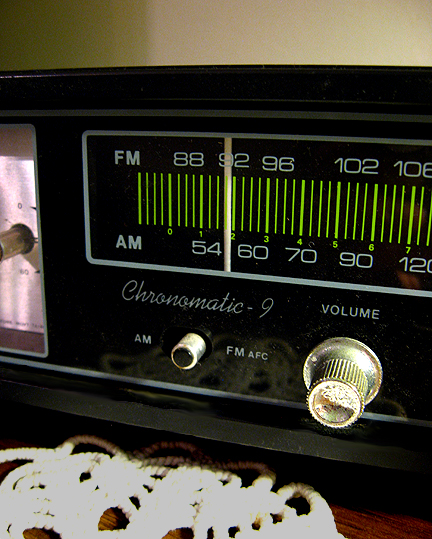 A radio’s purpose is to clearly receive a range of frequencies, and it must be tuned and positioned to make reception possible. And the goal of the radio’s purpose is for a person’s ability to listen. Radios have no memory. They do not store their commodities. Like cameras, they are instruments designed to register the moment. If such objects are considered in an iconographic context, we can ascribe our personal memories to these instruments. You may see a Realistic Chronomatic 9, but I always see the 15th birthday gift from my father. He offered to buy a television for me, but I said I’d rather have a radio. Over the years, I’ve added a few antiques, and find it remarkable how well they continue to work daily- thus defying the culture of manufactured obsolescence. 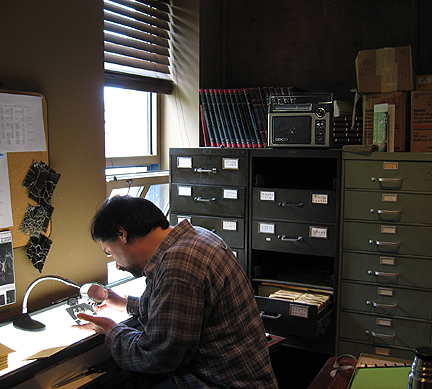 Providing company at work. The G.E. radio (top right),
a gift from my lifelong best friend, has accompanied me
through schools, studios, apartments, and many workplaces.

From my nighttime desk, the warmth of quiet music emanating from my radio aperch by the arching lamp, the new year stretches out before me. True to ascribed iconography, the small Grundig on my desk is understated yet far-reaching. It reflects this very instant, having neither past nor future. Yesterday’s news, scores, and statements are forgiven. Brightly through night hours, sounds of Mozart sweeten the horizonless abyss. Its life is a constant update; times and temperatures are always of the moment. The parable of the radio is one of receptivity and discernment, with static cleared away. Winter’s deeps remind us that above reportage and ads are angelic messengers bearing words of assurance. Mystery steeps our midst, and we’ve but to merely acquiesce. 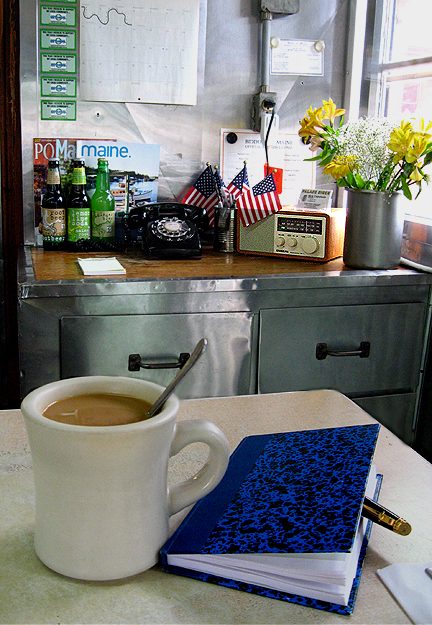 A bright morning near the radio at The Palace Diner,
in Biddeford Maine.

I'm reminded of the late '70s, when I got a clock radio of my very own and stayed up at night listening to KMPX ("Kind Memories, Pleasant Experiences") -- a Big Band station aimed at an audience half a century older than me. It was magic.

Wonderful posting, thank you. I remember AM radio being a lifeline while in high school in the early 1970s, and again years later when living a solitary existence.

I still have more radios than I can use, my latest being a little Grundig from Radio Shack, one of those push-button digital jobs with preset memories and a complexity of operation that I need to read the manual just to remember how to recharge the internal batteries (hit F5 when it's powered off).

Late-night AM radio here in America is not as entertaining as it once was, but I do enjoy the english-language broadcasts on shortwave from the nether reaches of the airwaves, like Taiwan for instance.

Thank you very much for this post. A few years ago when I was at university I listened to the radio every morning. There were a few mornings when I had to get up very early (5 AM or earlier) to work on a report or to study, and the voices on the radio seemed like friendly voices who were there to remind me that I was not alone. While everyone else still slept, I had my own small circle of companionship within my tiny dorm room.