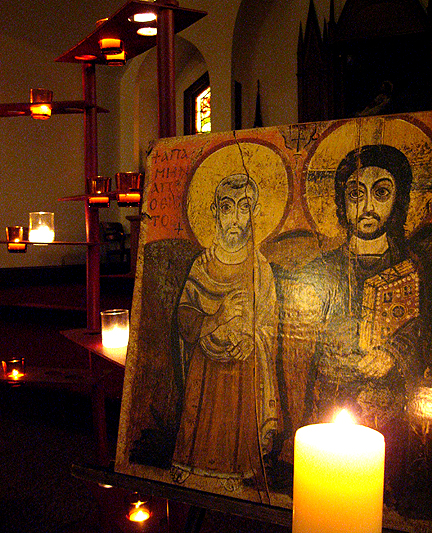 “the word spoken by angels
was steadfast.”


Swirls of words swarm our days. Screens, phones, printed media, and spoken directives inform and distract. For the most part, the information is excessive, and the distractions tend to derail. Through barrages of verbiage and clichés, the mind is astonishingly able to extract key words. Amazingly, we are as capable of sifting and sorting, as we are prone to missing the point. Words formulate assemblages of letters and sounds that connect souls to concepts, and ignite our responses. Communicated and internalized words carry potential as pivot-points toward our gratitude as well as to our fears. Indeed, what is comprehended either in writing or by voice conveys a message. The words themselves are ethereal structures, yet they may have their own iconographic properties. What is the worth of a word, as a value denominator?

Rather than to look at the broader subject of words in general, my thoughts turn to the word as gift. Holy Scripture phrases universally encompassing magnitude as God speaks life into being. Before all things that live and generate, there shone the Word, the uncreated logos, all at once both ancient of days and ever new. From the panoramic expanse of creation to the humility of human hands, an affirmative word signifies action. Yet still, without physical dimensions, gratefully received words can be cherished as artifactual treasures. In a mystery that is uniquely human, this is possible. The spiritual gift of memory is able to retain more than words themselves, but their contexts, and the tones of the soothing spoken voices that first accompanied those words. With careful curatorial cultivation of the soul’s archives, our highly personal gift-words can be at the ready when we need them. Gift words represent needed strength to sustain the soul through dark times and to make strides in fair weather. 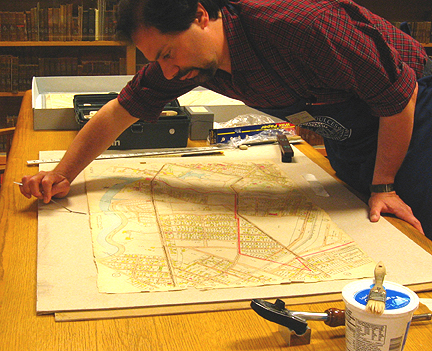 As it admittedly happens, during a rambling church service my attention turned to my palm-sized New Testament which I keep handy for such eventualities. The tiny book is filled with years of my own pencilled notations. Opening it to Hebrews, my favorite biblical section, the words faced up to me as the gifts they are. Each assuring word, and it happened to be the second chapter, reminded me of a weathered yet shining inheritance. Pearls of greatest price have landed in my hands as the brightest orange autumn leaves, wafting through open air to nestle precisely where I can receive them. Then I thought of the ways I restore documents and books, as a paper conservator preserving the written word. Even the bindings and flyleaves have histories to tell. Yet I returned again to the strength of spirit undergirding those tiny, thinly-printed words in my small book. There are many millions of these editions in the world, but this snowflake reached my hands as though authored and printed expressly for me. 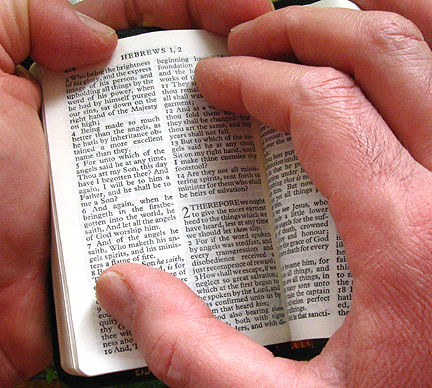 For those of us who consider, construct, and comprehend with words, there is an added sensitivity to the verbal message. If we seek, we notice. What makes a word a gift, even something that points to the wellsprings of life? One aspect that comes to mind is that gift words are those pointed directly at me- fashioned especially for me, and spoken to my very condition. Another aspect is how my re-recital of these life-giving words effectively rekindles their intentions. But we sense far more than we can see, and I’ve come to believe that longings surface long after they have been rooted within. Part of this mystery is a longing for good words that reinforce, yet catch us by surprise. Words from our friends that know us best are often the messages that are most striking to our hearts. 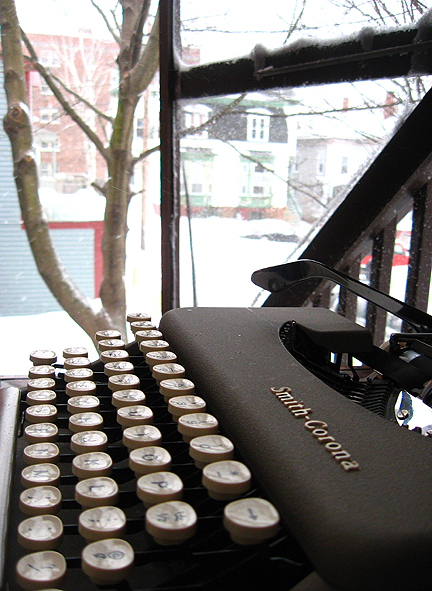 The Spirit assures as well as alarms. Two personal examples which I never talk about have their places in this reflection. Very late one night, back when I was 18, I was interrupted from studying at my desk. I was living on a quiet street with large spaces between houses, and was very much awake while the rest of house was asleep. From outside my nearest window, I heard my name, called out several times in a brass-sharp tone. It sounded close to my windowsill. Of course, I went to the window to see who wanted me at that odd hour. Living on the ground floor, I ran quickly outside. Nobody was there. No footsteps, no vehicle, and not a subsequent sound. Just the night sky.


On another occasion, much later and in a very different place, there was a similar shock of an experience. Walking across a plaza in Boston, a section of pavement gave way underfoot and I fell through. I remember the pedestrian directly ahead of me was a blind man with a guide dog. It was an abrupt fall that I hadn’t a split-second to break, and the impact effectively shut out my lights. Long after the rescue, the bandaging, and the recovery, two aspects would not leave my thoughts: firstly, I wanted to know how long I had been unconscious, and secondly I wanted to make sense of something I “saw” during however long that span had been. I would return to the accident scene, bordered with yellow tape, and wonder about how long it took the medics to arrive. I had been reading Saint Augustine’s “City of God” on the subway, and I later had to clean my bloodstain off the cover. The book had been picked up and put on the stretcher with me. But I saw something, and I can describe it precisely. On a black background I saw two words, centered and all capitals in white: “IT’S YOURS.” It took a few years to comprehend something so unusual for so completely sober a person as myself. But the meaning came to me, and it remains to remind me that the life I have has been given to me. Though unknown and without influence or wealth, the gift of living can yet thrive. Several years ago, while running the footpath around Portland’s Back Cove, I looked to the sky above Casco Bay. The “It’s Yours” that had come to me became my “It’s Yours” that I suddenly understood to give back. Sprinting along the salt marshes, I said, “my life, God, it’s Yours- all of it.” The gift of “it’s yours” is to be given constantly. 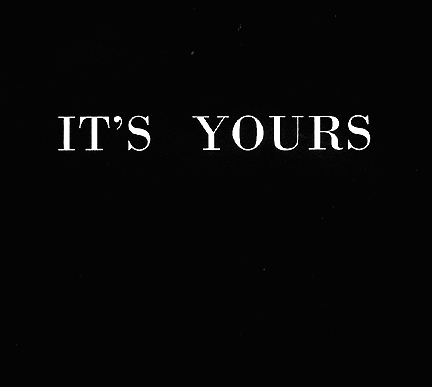 What I "saw" when unconscious looked very much like this.

As much as words received can be traced back to their points of emanation, that which we internalize will draw us to our sources. Gift words do bring us to the sources of what strengthens us, and what gives each of us our own historic context. Consider how we find our ways through our days with symbols and words, noticing the nutrients as we seek them out. Indeed and realistically so, not every word and message will nourish. The gift words are the rarities that tend to be exceptions to the rules, yet surely not impossible or limited to few. Such words and sequences that enliven are discovered as they emerge. We notice as we seek, and we seek as we notice. Gift words, either spoken or in letter form, provide turns in the road that divert away from meditating upon miseries. Perhaps you, too, have your reference archive of gift words or even musical accompaniments, calling forth your truest self- that which is historic, evolving, and rooted. 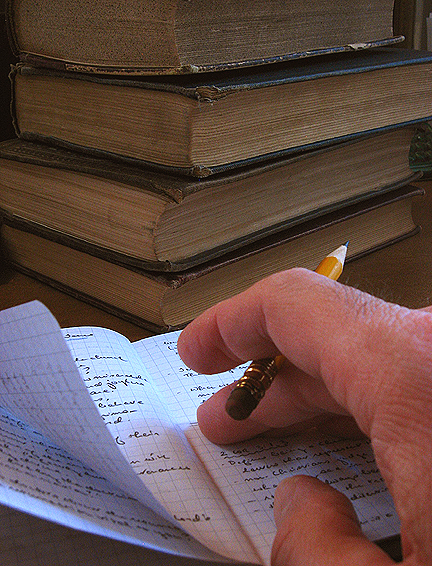 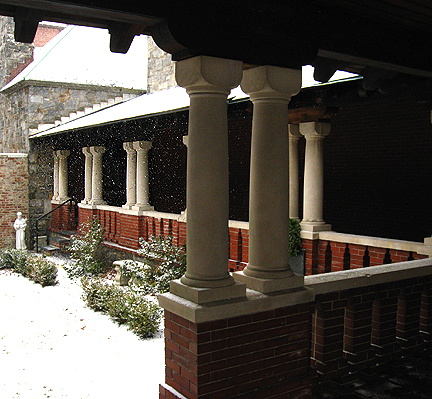 Very beautiful photos and writing.
I find those pocket New Testaments quite handy and useful.

That evening at home seems spooky but your words from the fall remind me of a painting I have in my radio room:
Life. It's your gift from God. What you do with it is your gift to Him.

The vision you had ("IT'S YOURS") is really fascinating.