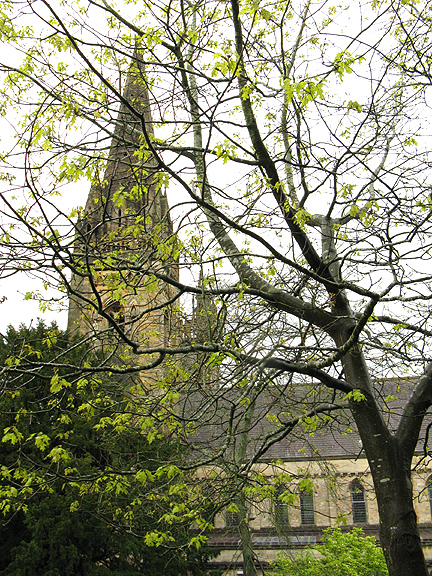 “The pilgrim oft,
at dead of night, ‘mid his orisons hears,
Aghast, the voice of Time disparting towers,
Tumbling all precipitate, all down-dashed,
Rattling around, loud thundering to the moon.”


A month of places, discoveries, roots, and souls in Wales were connected by roads, rails, and numerous miles of paths. Routing from the southwest back through Swansea and toward Cardiff, I chose to explore the capitol city only after a walking pilgrimage to Llandaff. Turning my steps, I was reminded of a ship tacking northeastward. Packed bags and filled notebooks had already accumulated treasures and impressions. By this point in the voyage, I’d grown very pleasantly familiar with Wales. Travelling and exploring does, however, have its fatigue factor- but this was a cathartic roadweariness. Journeying pilgrims inherently grow a bit edge-frayed, but appearances also become less important with each adventure partaken. Longer journeys allow voyagers to take stock of experiences while in the midst of travelling. 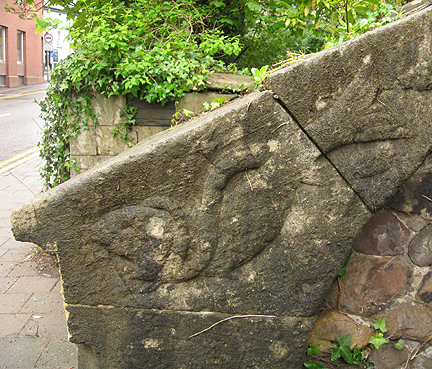 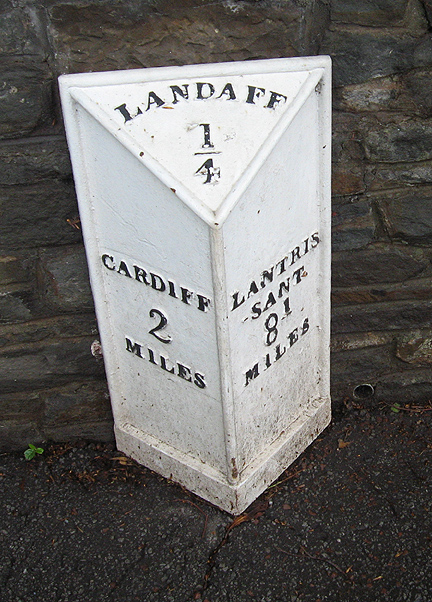 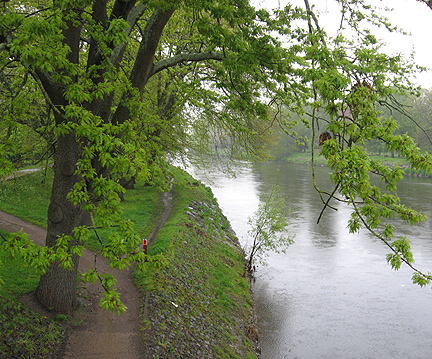 The River Taff, north of Cardiff, and entering the Cathedral Close in Llandaff. 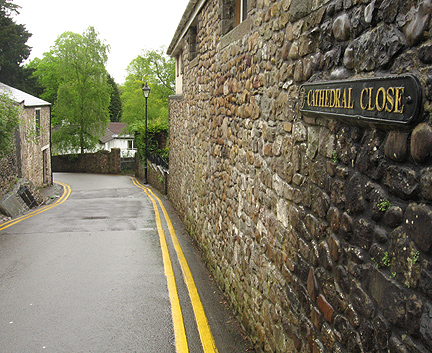 The freedom to pace oneself differentiates healthful motion from the life of fulfilling demands left at places of employment. Travels that stem from a drawing-forth of the Spirit are by nature meditative. Ever a pilgrim of trust on earth, walking the winding miles of the Cathedral Road which begins near Cardiff Central railroad station, my thoughts raised skyward with “what do I really have in this world?” Not as deprivation, but an untethering. The ancient Psalmist that said “whom have I heaven but Thee,” has such present-day successors as those who set forth on foot en route to 1,500-year-old holy places and stop along sidewalks at book shops. The journey to Llandaff transitions from city streets to verdant landscape as the settlements wend their gradation from the 21st century to the 12th. Even with one of Wales’ most prominent pilgrimage sites as a destination, the way there is integral and to be savoured. Journeying from the place of heart’s longings is also actively observing and learning with each successive step. Alerted senses notice sights that can be easily overlooked. 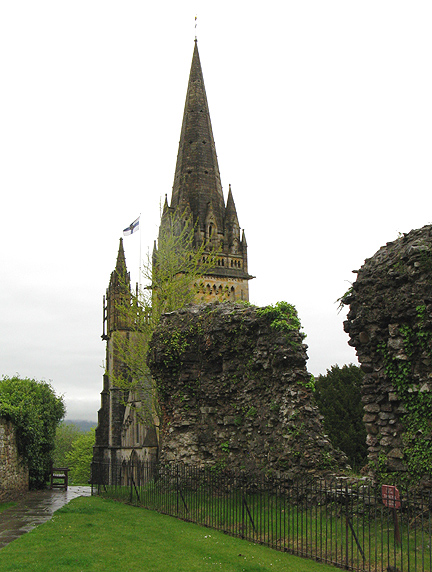 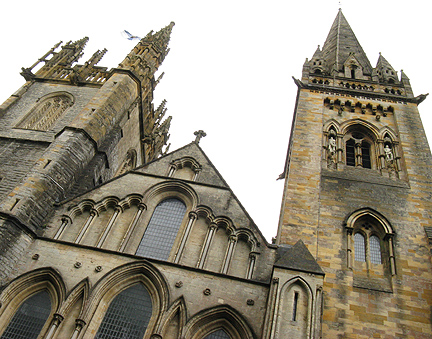 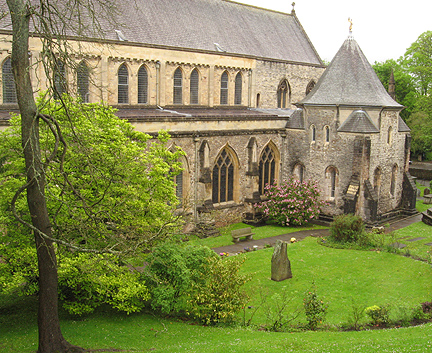 Since the 500s, Llandaff (“church on the river Taff”) has been a place of prayer, beginning with Saint Dyfrig’s community. Saint Teilo (one of Saint Dyfrig’s students), whose remains are in Llandaff Cathedral, was the bishop of the community. His cousin was Saint David, the patron saint of Wales. Devotion to Saint Teilo can also be found in Brittany, which is the Celtic region of France- where a number of parishes are named Saint-Télo. A large 6th century stone Celtic cross outside the cathedral represents Saint Teilo’s times. Llandaff cathedral itself dates back to the 12th and 13th centuries, and has long been a place of pilgrimage. On top of enduring its span of tumultuous centuries, the cathedral had been severely damaged in World War II. The latter made careful and extensive repairs urgently necessary, extending into the late-1950s. The combination of abiding antiquity with phoenix-like ascension provides profound impressions for an advancing pilgrim. 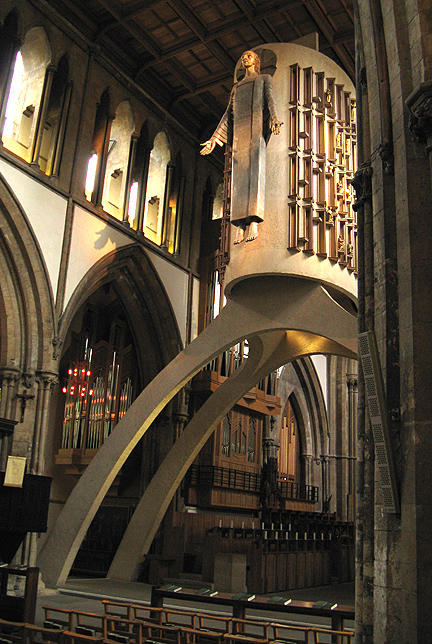 This extraordinary and modern Risen Christ is at the center of an enduring ancient site. Nearby is a reminder of the cathedral's rebirth after World War II. 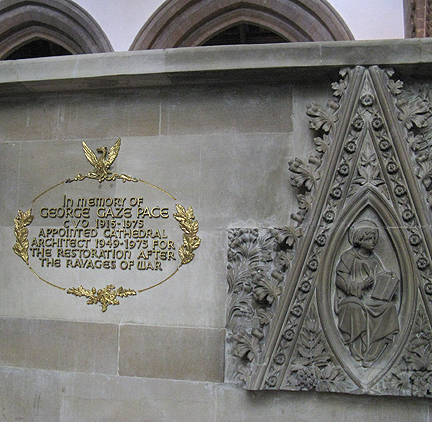 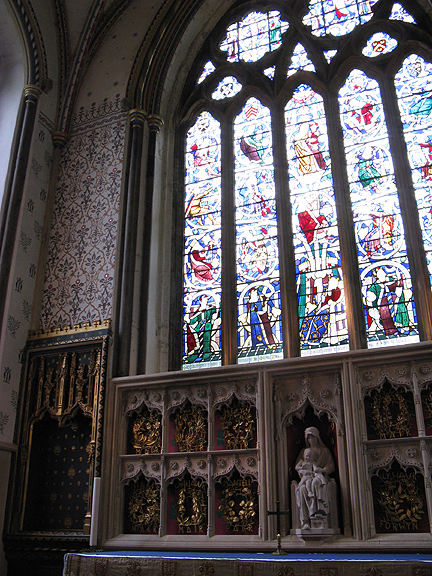 The roads into the town center of Llandaff lead to a mediaeval market square, from which paths descend through trees toward the cathedral. Towers and spires reach skyward, contrasting the sense of being in a riverside vale. Through ancient arched doors, the entrance steps down into the vast cathedral. Inside the cavernous space, paces connect ancient and modern shrines, reminders of events and lives, always with a wonder of this witness of assembled sculpted stones. Engravings and reliquaries remind me of the great cloud of saints that have preceded us. Large, decorated, handlettered Bibles are kindred ancestors of the printed pocket New Testament in my backpack. 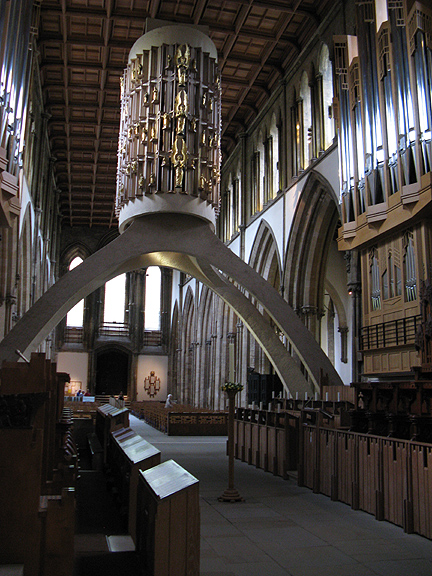 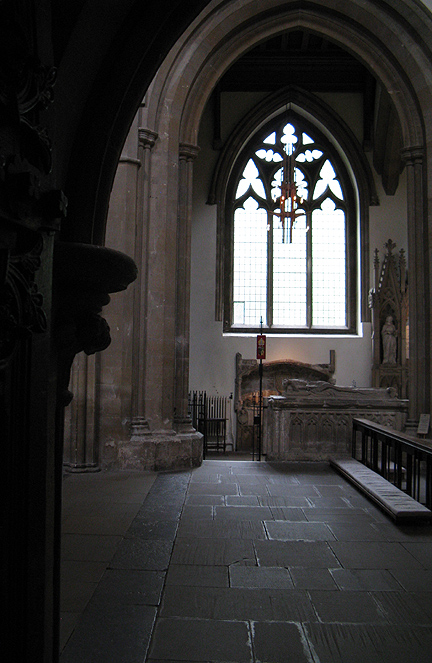 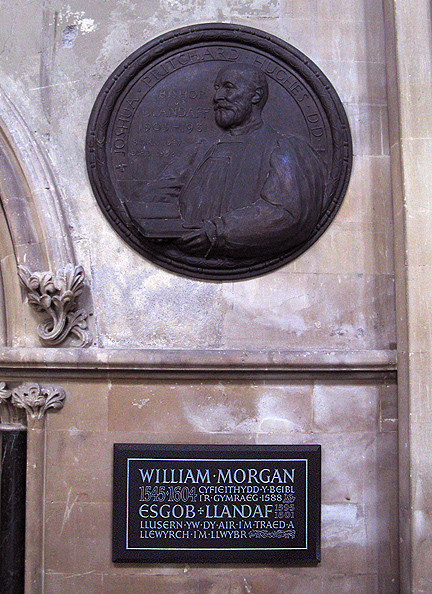 
Circling the cathedral altar slowly was an experience of having arrived at a very central place. Pilgrimages have destinations, though true to a life of passage and traversal these terminus points are waystations. Along the paths to these sites, I was well aware of the trails as having been left to the present by pilgrims of old. Following the flagstone steps with reverence, I also know that my own journey is unique, as it is the one upon which I have been doing the travelling, and the way of my navigation. 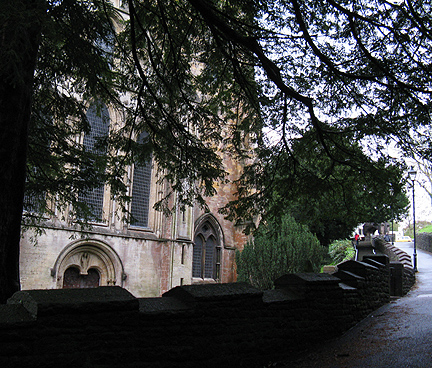 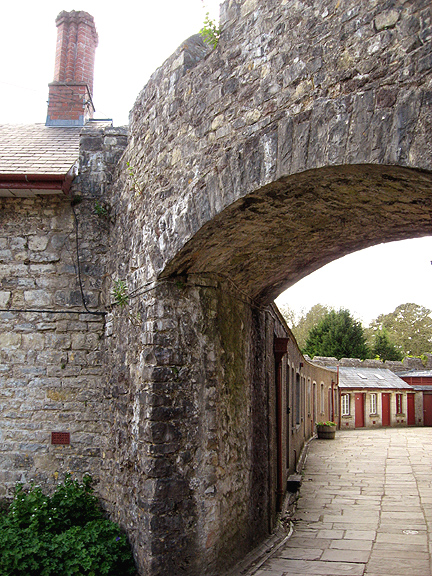 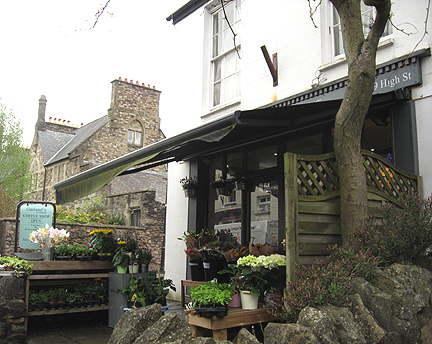 From the Cathedral Green to the High Street, the town's essentials are found. The post office (below) is also a stationer- with toy dragons in the window. 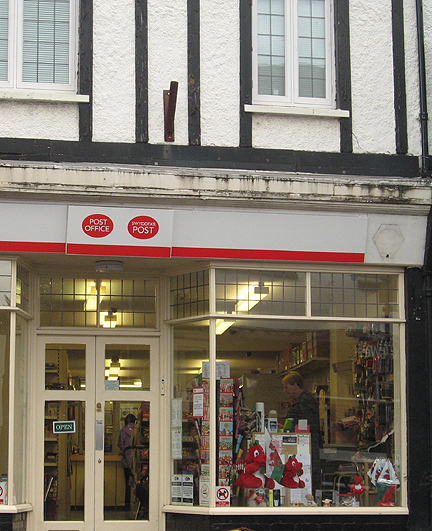 Llandaff cathedral gives the small town of its environs the qualification of city. Asymmetrical streets and houses nearest to the cathedral are the oldest, with a blending of mediaeval and Tudor styles. Fortunately, the ancient market and cathedral square is not interrupted by traffic thoroughfares. One of the roads emanating from the center is the Llandaff High Street, along which are shops and tea rooms. Not to be missed, essential pilgrims’ waystations are places of nourishment. With many miles already walked, and more to go en route to Cardiff, a needed pause was taken to taste of Saint Teilo’s town. 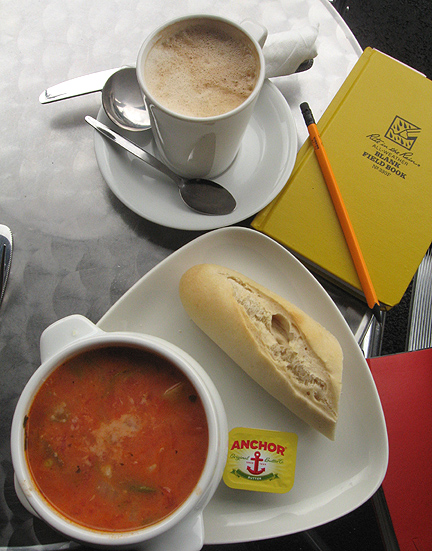 A savoury feast fit for a pilgrim, on the Llandaff High Street. 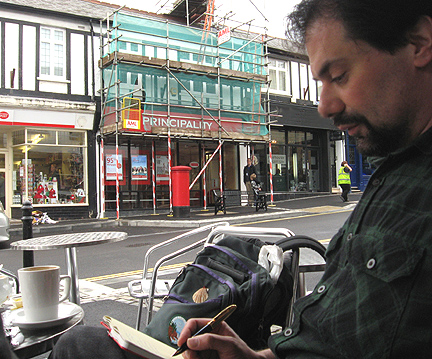 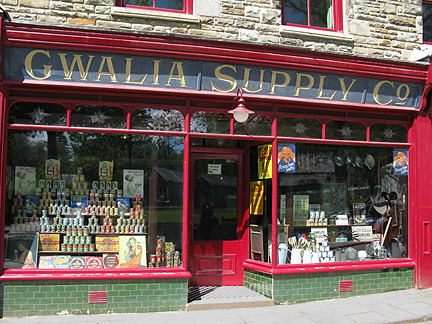 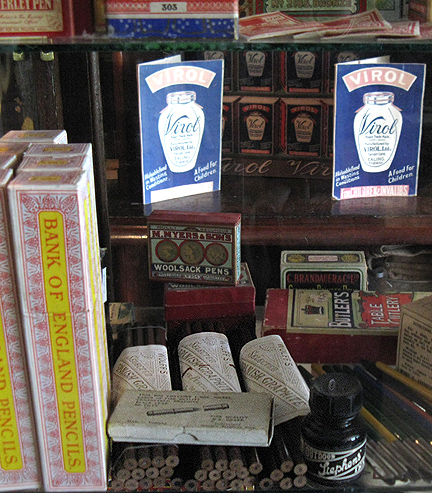 Now, my writing friends- after window gazing at the tools of our profession, wouldn't you look twice at the street sign below?. 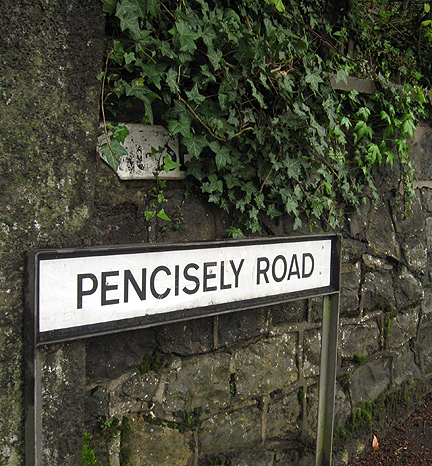 Strengthened by the short respite, the road resumed. From stone and earthen paths, to lanes, streets, and the A4119, continuing on to Cardiff, the way rejoined the busier city paces. With some doubling back, various landmarks were recognizable to me. I’d also become accustomed to the low-mounted street signs often affixed to walls, instead of the high-posted intersection signs in North America. Looking ahead to the capitol city reminded me of my eventual return from these remarkable travels. There are always subsequent journeys to anticipate. For the moment, however, new acquaintances with ancient sacred sites and saints provide enduring gratitude. Docks, downtown avenues, and colorful Victorian arcades were awaiting at the other end of the Cathedral Road. 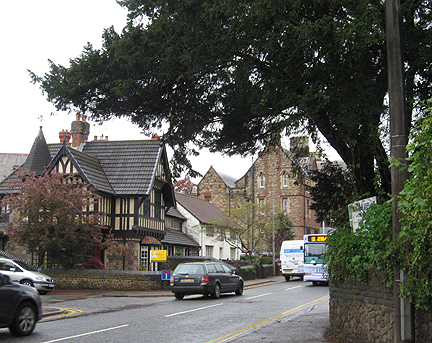 The Llandaff end of the road to Cardiff. 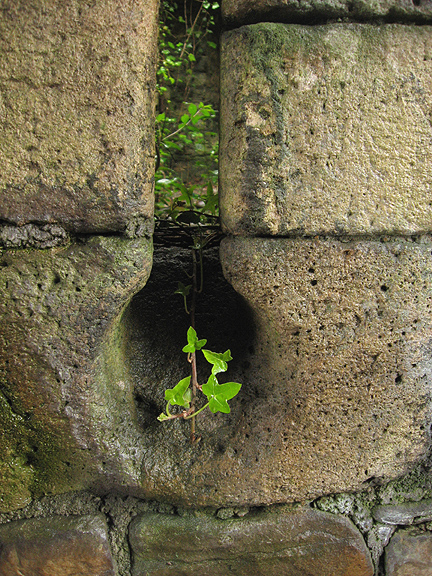 Posted by speculator at 9:05 AM

I know the feeling of being on an extended trip. We had been in England and Scotland for about 20 days, I returned our rental car to the agency at Gatwick and went to Britrail and told the agent I wanted 2 round trip tickets to Trondheim, Norway. His response was "why?" Mine was, "Why not?" He replied, "Because you are going to feel like a zombie and look like a refuge by the time you get there!!" It was a tough trip, but one I will never forget!

I love the fact that one sees so many Post Offices in small businesses all over the UK. To me, it makes great sense, the people are there all day anyway, doesn't require a separate building, and is convient to the local neighborhood. It would seem that we could learn something from that in this country along with many other aspects of the way things are done in not only the UK, but in the rest of Europe.

Question: I see you were using the RITR notebooks, a good choice for the climate. What hardness of lead do you use? With HB, I get some smearing, less with 3H. I have gone to 4H which alleviates the problem, but would really like a bit darker line.

Another great post, and as per usual, the photography is just wonderful. Thank you.

Thanks so much, Crofter.

I've admired how Welsh post offices sell all that is needed to write and send letters, thus promoting written correspondence. In Bangor, the post office is situated inside a W.H. Smith stationery store.

As for the rainproof paper, the trick is not to press the pencils too much. I brought this journal knowing I'd see a lot of damp weather (just like Maine!).

Thank you, I have a couple 390F notebooks just waiting for my next trip, I like them as travel journals.

There is no feeling that quite matches the anticipation of firm plans laid and plane tickets purchased. However, for the time being I must be content with vague plans of dream destinations.

What is the hole in that rock in the last picture?

Thank you so very much, Summertime. I'm very grateful for your comments.
The space in the wall is near Llandaff Cathedral, and is around a courtyard. It really caught my eye.

Ah ok, I thought perhaps it served some sort of ancient purpose.

Looking forward to more of your stories and photos.

Incredible! i just spent the last 20min reading and looking through this entry. you made me feel like i was there and experiencing some of it.