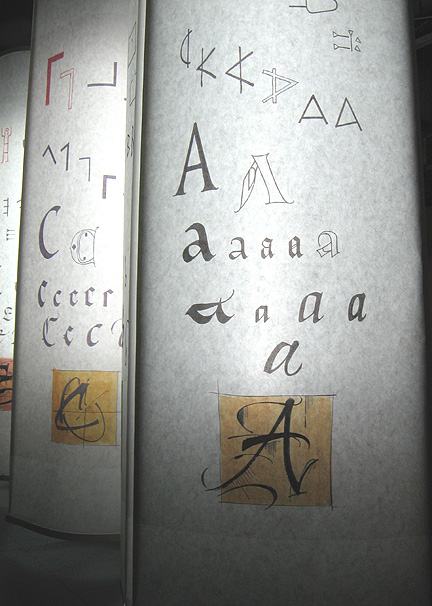 “It's all making me ready.
It's all doing what you gonna do.
I know "A"
I see my life come shine.”

~ Jeff Lynne, King of the Universe, from On the Third Day


This time of the year has come to be my busiest. Although late winter is conducive to recollection, my routines have been gratefully diversified with travels, playing music, and being among friends along the way. Part and parcel of the pilgrim path is note-taking and photography. Here is a chance to catch up. On a recent sojourn in Paris, an elegant subway poster drew my steps to an enthralling exhibit about the history of written letter forms at the Musée de la Poste (the postal history museum). The venue is familiar to me, but this show was extraordinary in presentation and depth of collections- the galleries filled with artifacts, printed and handwritten works, connected by narrative installations. It was easy to take dozens and dozens of photos, thinking of my fellow writers who might at least enjoy an edited version. 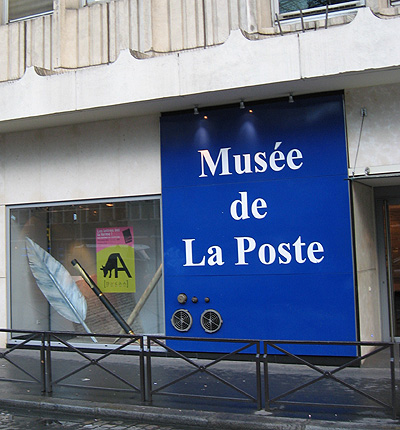 When we are writing, we join with a vast and boundless continuum of thoughts expressed in lettered articulation. Words constructed of typographic elements are shaped into our communication, description- even unspoken narrative. Further, understanding often hinges upon clarity of letter and language. Arrays of individual letter characters, with which thoughts are framed, present their unique graphic balance. The very letters I handwrite- and even type at this very moment- are inheritors of evolved typographic architecture. This museum exhibit reminded me very much of our working legacy of form and function. Indeed, an already existing affinity for the practices of graphic arts and calligraphy kept me in the Musée de la Poste for hours! Yet, all the more after exiting, my appreciation extended further as I noticed letter forms on buildings, in print, and in the city’s adornments. Then I chose a corner café to continue journaling. 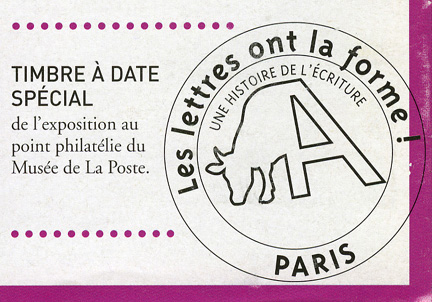 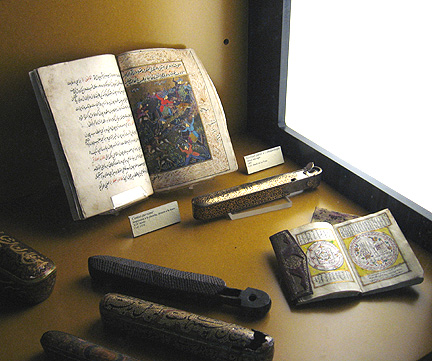 Between wall panels displaying very large translucent parchment-like A-to-Z letter murals (as in the top photo) and illuminated manuscript pages, were these books. Just above, in Persian, and below from Ethiopia and China. The Asian displays included collections of ink-grinding tools and lettering brushes. 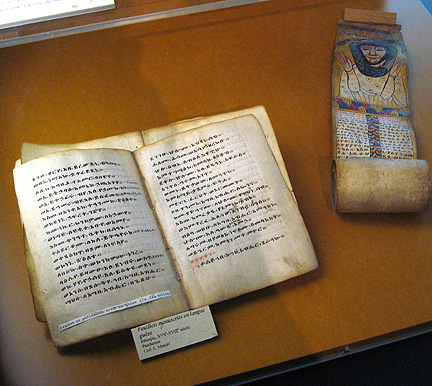 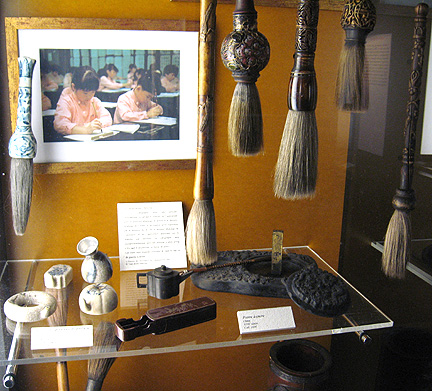 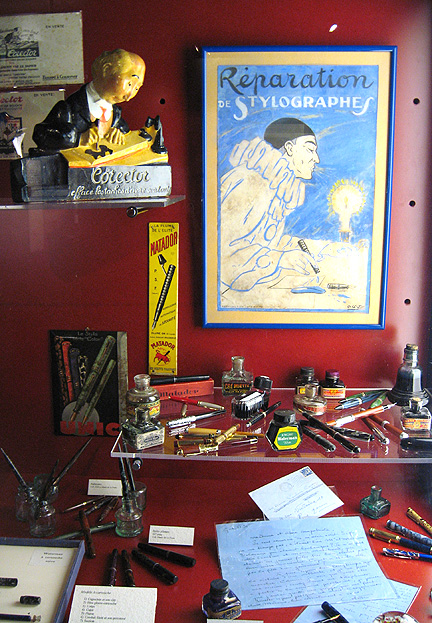 Moving through history, the galleries turned to displays of writing tools using ink and paper. These French-made materials were also beautifully advertised, reflecting the styles of their times. Note the pen-stands, and glass-pointed pens. There were display cases filled with the tiny boxes in which copper pen-points were packaged and sold. 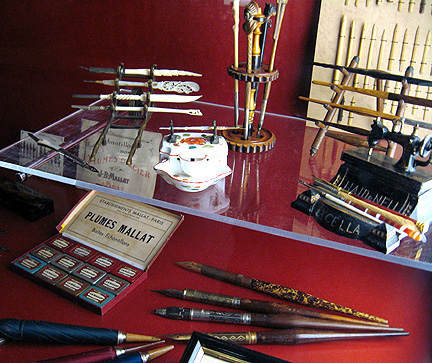 The sections of a glass-reservoir Waterman fountain pen just below. These pens are still made in France. Fountain pens began to replace dip-pens and inkwells. 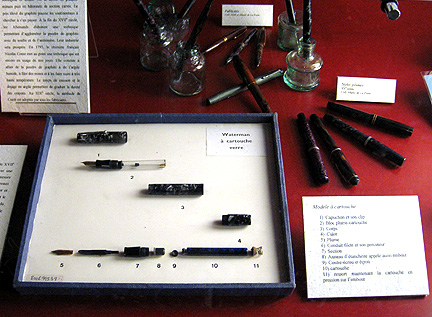 Among the impressive variety of inkwells displayed (one resembling a chariot, another in the shape of a coal stove) are these, just below. At right is Voltaire's inkwell and pen stand. Imagine what had been written with these tools! 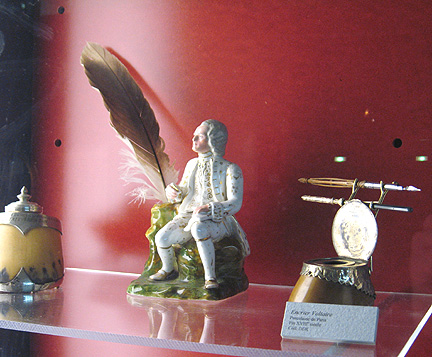 Indeed, a fine showing of graphite writing tools not to be missed. Sennelier and Caran d'Ache are two brands that are still popular today. Pencils have hardly changed in the past century. Note the crank sharpeners on the right. 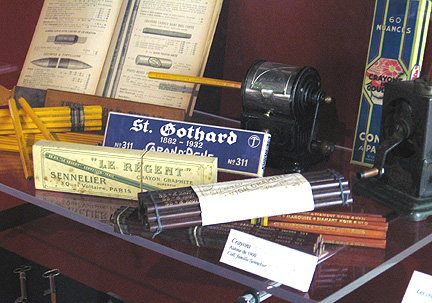 Just below is a portion of a large Bic ballpoint display. Some of the memorabilia advertising Bic, also a French company, was loaned by the Musée Carnavalet (the museum of Paris city history). 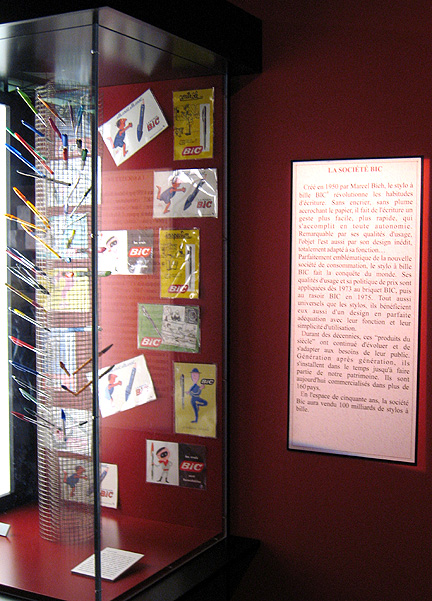 Though the focus of this history of writing exhibit concentrated on handwritten letters, the concluding gallery displayed letter-press printed pages, a 19th century cast-iron printing press (made in Boston!), and an Underwood typewriter. And, yes, a nod to word-processing. Being the national museum of postal history, there was a great display of antique postcards, and an area for children to write letters. During my visit, a tour guide was teaching a school group the basics of calligraphy. 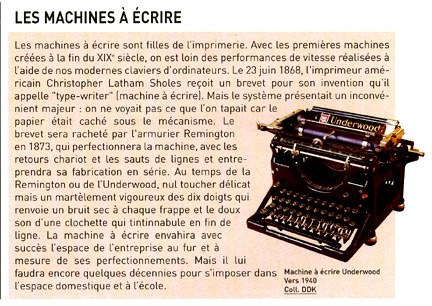 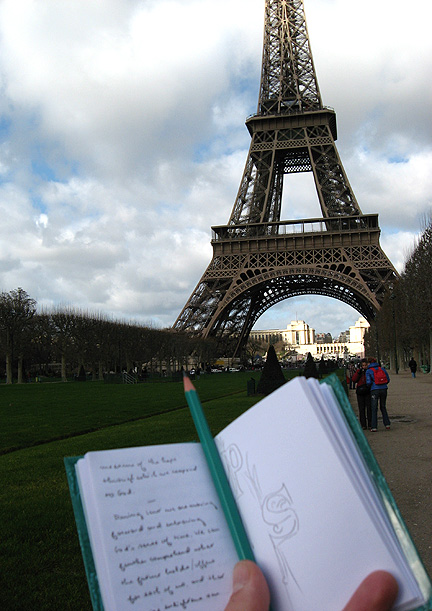 Resuming my steps along side streets and broad avenues, typographic forms abounded. A large and familiar letter A appropriately met my path.
Just below, miles away from the museum, a calligraphic display in the Sennelier store along the Seine. 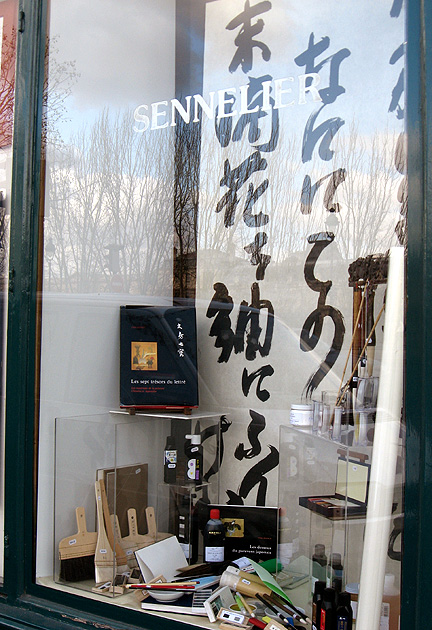 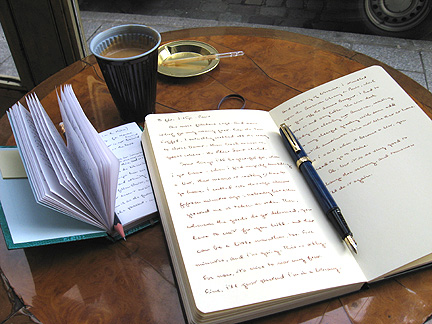 Posted by speculator at 6:33 AM

Some of the best pictures I have ever seen. Judging by the post I would have to agree that the "A" is quite familiar indeed. You were in France recently!!! France and Italy have been two places I really want to visit sometime. I have never been out of the country. The only thing I have to relate is moving to Texas, it is like another country here compared to back home. Thanks Spec for a great post!

I didn't know Bic was a French company. What a marvelous exhibit. Had I known of this museum last fall, I would certainly have packed it into my short Paris visit.

Thanks for the virtual tour!

What a marvellous-looking museum. France is full of small wonders like this.

What a fascinating exhibit! Great photos...not quite as good as being there, of course, but you've captured the experience well. Thank you!

I'm fascinated by how the process of writing has changed and expanded through time, and I'm fascinated by the history of letters. Growing up, we had an old encyclopedia that started off each letter with a few pages showing the evolution of the letter, much like those murals. At one point, my brother and I made our own not-very-secure "code" by selecting one of the more interesting of those forms for each letter--a predecessor of each letter. I'll have to blog about that some day...we had fun with it!

a lovely journey in photos, I've always admired the typographic history, not only english but also other languages, it's just a shame I never learn chinese calligraphy

Beautiful! Great photos and a fascinating place. Thanks for sharing.

What an enjoyable post! Loved all the photos! You did a marvelous job. I think I may even prefer this one to the National Postal Museum as I love pens and letter writing and this had a lot more of that in their displays. Thanks so much for sharing!