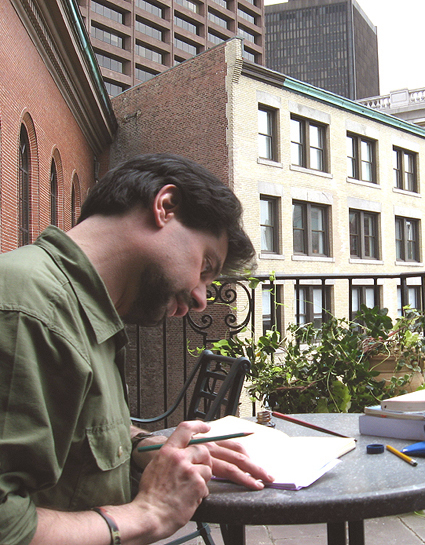 
For me to believe this new perspective is not a passing fancy, I have found it necessary for to test the new vision over these recent months. Rather like a rigorous road-test, I’ve needed to cover the range of weather conditions and countless miles of terrain, continually inspecting and tuning. Having but a mustard seed’s worth of faith can be exhausting, and some healthy diversions have been helpful counterbalances. Such as landscape-varying travels, retreats- and- visits to the Boston Athenaeum. Indeed, on a fine day off, I’ll make for a philologist’s Eden filled with ancient books, prints, archives, and sculptures. There is always something to learn, some 19th century French book that hasn’t been borrowed since 1930, and hidden mazes of shelves still to be explored. On the first of May, they open out their rooftop area, and it becomes the finest of reflective perches. This had been a thinking place for the likes of Emerson and Thoreau. Good enough for me. A change of scenery is useful as a departure from a changing perspective. Departing in the sense of moving away from emphasizing transition, as it seemed to be necessary for some time.


With new eyes there is still transition, but of a less abrupt, reflective kind I cannot yet articulate. After identifying so closely with losses and struggles over a period of years, my identity then became enwrapped in a recovering quest. From there, in the past year I have worked at a sincere renewal, and for a time such intense focus has been necessary. Now it’s a bit ironic to notice how I seem to require a lot of convincing evidence to believe things really are changing, and changing for the better. Indeed, the wish for change takes a great deal less time than enacting the new ways and living with them! And further still, a new vision requires vigilant mindfulness with a commitment to adventurous processes of moving from the stagnancy of dead ends to discovering a capacity for joy and wonder. Have you ever had a substantial conversation with a friend, perhaps with a good long walk, during which you’ve lost track of your abiding miseries? Somehow the here-and-now of the visit with your friend throws enough light on your path that you wind up reminding yourself about what was wrong, because the sorrow begins to look as temporal as the sudden consolation. If faith is the opposite of fear, then surely wonder must be the antidote for despair; and my gratitude only intensifies for such compassionate friends whose words and gestures point out the choices that manifest at the crossroads of despair and wonder. Such experiences allow me to do this for others.


Living a mutual availability does risk burning-out, and that adds great importance to identifying the sources in our lives. In my experience, an oasis is a place or situation with reminders of hopeful direction to propel us on our way. Oases are also transcendent of the limits of place, though there can be an attachment to place, as well as the consolation of a familiar embrace or a gentle voice. Realizing I can’t always be out on the roof of the Boston Athenaeum, or in its hallowed reading rooms, there is certainly the neighborly café near my employment, and other such consoling perches along the ocean. Years ago, a colleague referred to my love of Kettle Cove with the observation, "there’s nothing like having a reference point on the globe." Those kindred souls who witness our lives (and we recognize theirs) are vital sources of encouragement and belonging. Inevitably, knowing the vivacity of encouragement, the wellspring of spiritual life beckons me to seek to be an oasis in its endlessly creative forms.


Ambitions are meant to evolve alongside our development. The provisional has a dynamism all its own, and this is a time "between" dreams. New hopes send our lives into new directions, and they are cultivated and refined as our life situations change. Trepidation has run its weary course, and the open-endedness of my days carries an abiding excitement along with it. 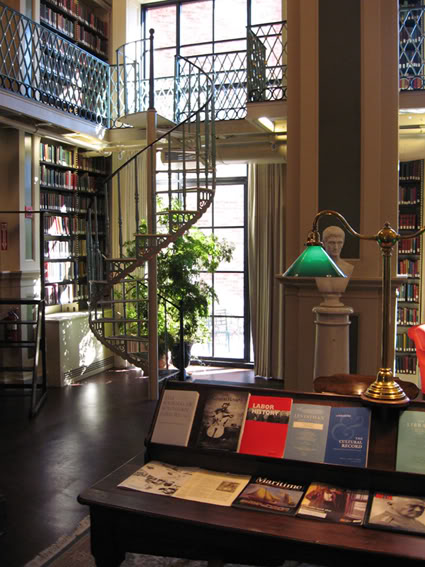 Posted by speculator at 8:10 AM

Ok I'm not sure if that worked the first time so I'll try it again..if you get this comment twice I apologize!

Sometimes I feel like you are writing my life. This was beautiful as always and truly meant the world to me.

It was good to read your words tonight, dear A. It reinforced some things for my own self. I saw that, in recent days, with the tiger above and the rocks below, I have begun to eat strawberries. My previous week was very, very dark. But I think I'm beginning to see that there really is no tiger, and no rocks.

I'll take the strawberries, though.

I love to see the influence of your readings, and to see how your vision sharpens more and more keenly both with study and experience. I wish it didn't have to take so many blows to smarten us up!

I felt a homesick pang to see the lovely Athenaeum again. And really, such a good night for me to read your discoveries. I'm glad you are out there looking, dear a. It so helps to bolster my own returning faith and trust.

Have you eaten today? I did!! love, h