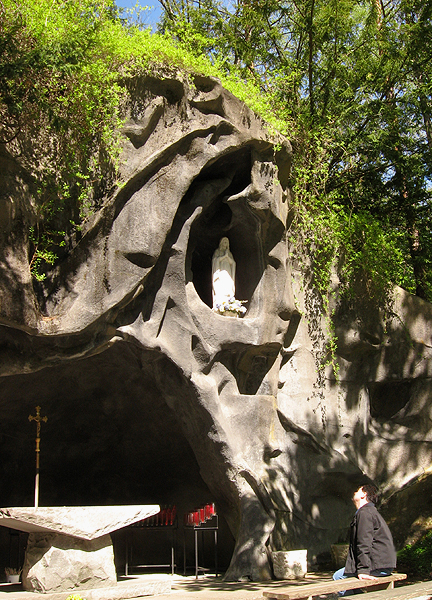 “For the days pass, and never return...
Take the Adventure, heed the call,
now ere the irrevocable moment passes!
‘Tis but a banging of the door behind you,
a blithesome step forward, and you are out of the old life
and into the new.”

~ Kenneth Grahame, The Wind in the Willows. 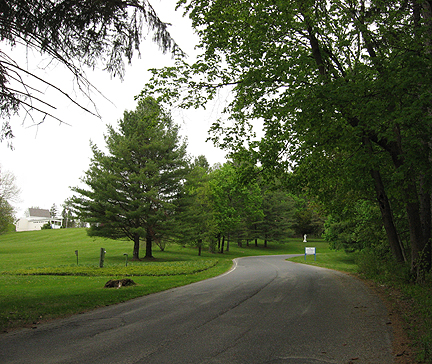 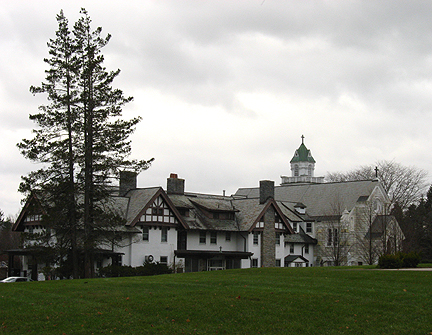 Pilgrimage blends together intention, travel, and place. Before any setting forth, before thoughts of destinations, there is longing, calling, urging for a communing with the wellsprings of creation. This type of thread has wound through countless lives, in entirely unique ways, over immeasurable time spans. The will to pursue purpose and fulfillment is as individual as a human spirit itself. We seek and we discover, as we are capable. As a soul develops, there follows an increasing ability to discover and appreciate. As well as an iconography accompanying roads, paths, and thresholds, there is double-meaning in the word intention, the term used both for purpose and for prayer request. Such concerted movement, driven by the seeming otherworldliness of prayer, represents a propelling ideal: hope. And that forward movement must continue, especially when there is no hope in sight. 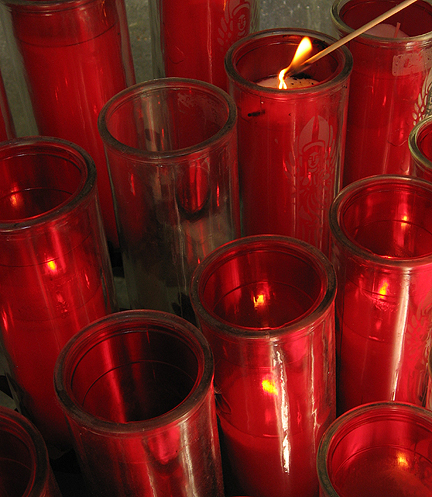 Carving out some time, I chose to sojourn in the Berkshires, remembering the beautiful merging of the mountain landscape, the town of Stockbridge, and the Divine Mercy Shrine. The National Shrine of the Divine Mercy is a public place of prayer, and community of the Marian friars and brothers. The Catholic order originated in 17th century Poland, and established their community in Massachusetts during World War II. The congregation’s charism is based upon the devotion of Saint Faustina Kowalska, a Polish nun who died at the outset of the War. Her journals document her life, vocation, visions, and an extraordinary prayer that appeals for divine mercy for all persons. Her confidants successfully hid from the Nazis, and were able to spread the written prayers of Faustina. She was declared a saint by Pope John Paul II, in 2000. Some of her remains are in the church in Massachusetts. 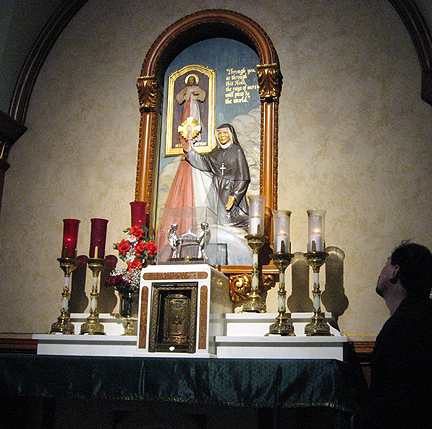 My history with the Divine Mercy devotion dates back to an extremely difficult life-trial I had to endure thirteen years ago. Unable to right my ship on my existing resources and nerves, I sought the advice of a wise and trusted friend. My advising friend, Sister Sylvia, listened and offered her reflections. After one of our long talks, she gave me a recording which had been made at the Divine Mercy shrine church. I’d never heard of them before, though I knew the region of western Massachusetts and southern Vermont quite well. Sister Sylvia knew how much I love the outdoors, and encouraged me to make a trip to Stockbridge. Indeed, I followed the advice, made the pilgrimage, and have returned several times since. 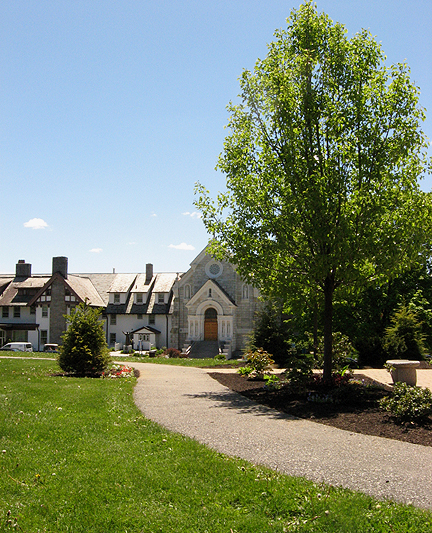 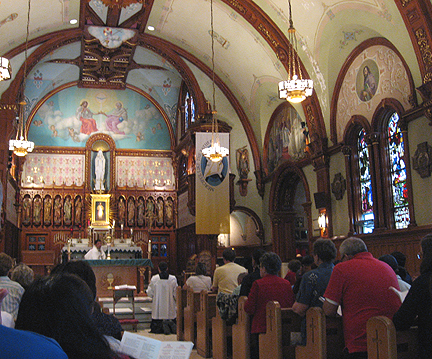 The devotion prayer itself is sequential and repetitive. I find it to be a confluence of east and west. The practice of meditating upon the refrain, Jesus, Son of David, have mercy on me, echoing the blind beggar’s prayer in Luke 18, is an ancient practice in Eastern Orthodoxy. A life’s adventure with that simple, poignant prayer is in the Russian classic, The Way of a Pilgrim. Saint Faustina’s Divine Mercy prayer uses the sequence of decades, as measured in rosary beads- a practice codified by Dominican friars in 13th century France. Faustina’s prayer refers to the suffering Messiah: “For the sake of His sorrowful passion, have mercy on us and on the whole world.” Extending personal prayer to all persons reflects the young sister’s anguish of having lived through a world war, and witnessing the horrific beginning of yet another. In her journals, she emphasized persevering with this devotion,“to obtain mercy, to trust in Christ's mercy, and to show mercy to others.” It is a message of compassion in the midst of persecution and cruelty. 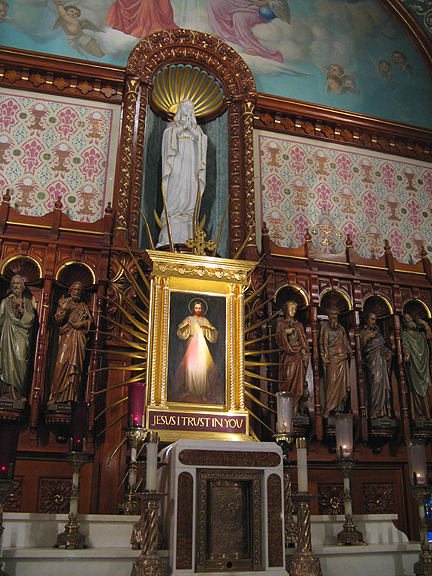 Considering its origins and its biblical focus, the prayer itself is intense. At the shrine church, the daily hour of Divine Mercy is at 3pm, following the 2pm mass. It is a solemnity, and to pray for mercy is to bring one’s burdens, along with those of others, into focused intercession. As a place of pilgrimage, many come from a variety of distances to the church, and the printed texts are in a number of languages. At times, I notice the others praying in the church, and am struck by the plaintive, earnest, palpable reverence shared by so many different people. The times of liturgy and prayer bring those in attendance together as a momentary community of fellow pilgrims. I, too, brought my intentions on this pilgrimage- along with those dear to me who asked me before I set forth from Maine. Some ask for healing, others for spiritual growth, a graduating student worker asked me to pray for him. As for me, it is for sustaining and healthful employment. Things have become quite urgent, and retreating to the community was for refuge. In all, the congregational cries for mercy incorporated mine, too. True to the legacy of Saint Faustina, we do not live for ourselves alone, but must uphold the intentions of others in need. So many people struggle. 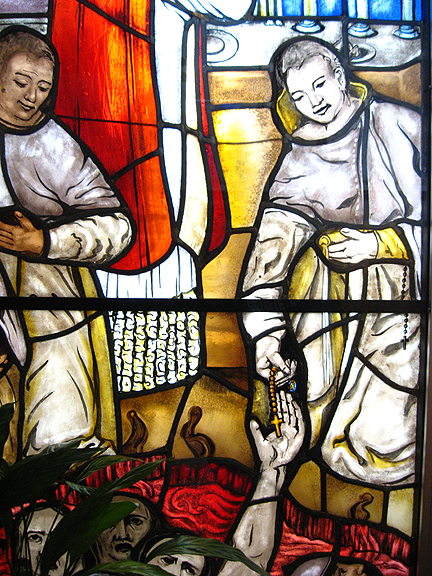 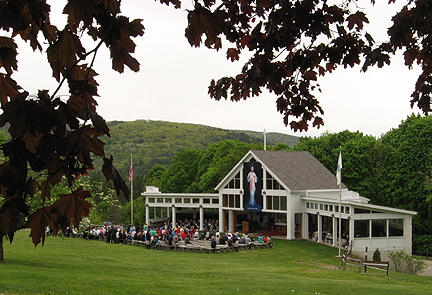 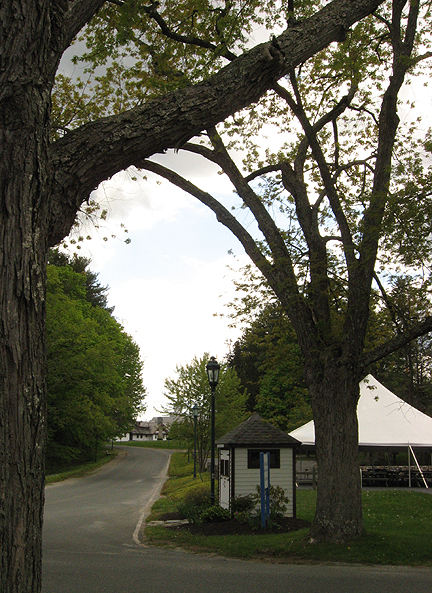 After exiting the church, following the intensity of the services, I regularly walked the nearby woods. Balancing the structured prayers is contemplative open air. The region is replete with hiking trails, rock ledges, and the Housatonic River. Early spring weather is consolingly moderate. Rural New England is especially calm during the off-season. My week in Stockbridge mingled the built sacred space and nature. As many pilgrims do, I lodged at the Red Lion Inn, enjoying the leafy village as well as walks to the shrine, which is in an area called Eden Hill. To relax my thoughts, I brought some light reading with me; just before leaving, I borrowed The Wind in the Willows from the Boston Athenaeum. I’d never read it completely before, the story became a companion along river trails and on the front porch of the Inn. As I found, the adventure takes place along a river. Words and imagery in the story strikingly matched the landscape in the Berkshires. 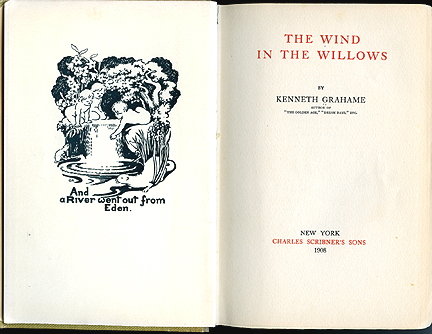 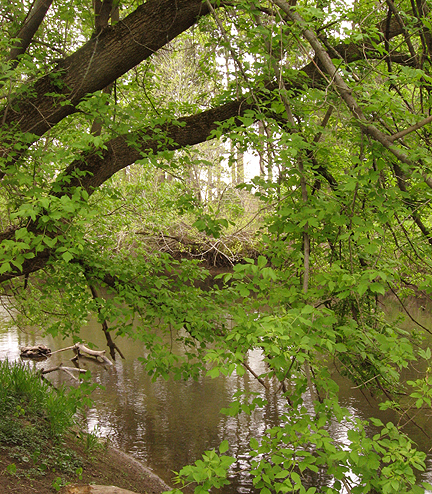 Hiking along the Housatonic, I made sure to look upward at treetops and mountains. The new spring growth in the forest sweetened the breezes, and with temperatures in the low 40s, I was not bothered by bugs. Such favorable conditions freed me to air my thoughts. It was a good thing I gave myself seven days, as I needed at least the first three to stop the workplace racket that followed me into my solitude. Gradually, the beautiful scenery, the equally beautiful prayers, and warm hospitality I received began to supercede residue from the situation I had interrupted for the retreat. As my steps followed a river curve, permitting a longer view, I told myself, “Don’t talk to the past. Just don’t. There’s nothing for you there.” Somehow, that became a refrain in a stream that flowed alongside the daily three o’clock Divine Mercy devotions. 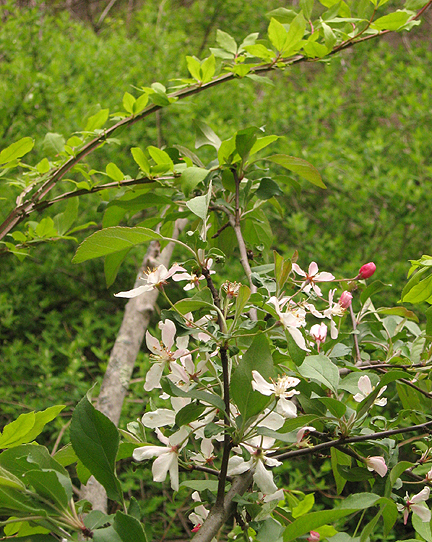 Although the Divine Mercy prayer is repeated many times, it is so concise and poignant that my every pronouncement is entirely heartfelt. Along the trails, and even as my thoughts strayed, I noticed how the prayer would return to me. Recent years of tireless caregiving and employment turmoil generated a persistent insomnia. During my immersion of mountain air and the prayers, I found the retained refrains for mercy lulling me back to sleep. Involuntarily the words speed up and slow down. The prayer is with me, right to this moment of writing. A retreat is neither escapist, nor is it a problem-solving venture; it is an intentional pause, a surfacing for air. I return to the same difficulties that I’d interrupted, yet with some experiences for reflection, a little more strength, and new reminders of the broader universe. Matching the harsh roads of daily life is the terribly unreasonable holding on to hope. One cannot exceed one’s all, save for a trusting faith that extends beyond the all. That is the opposite of negotiating with things past. 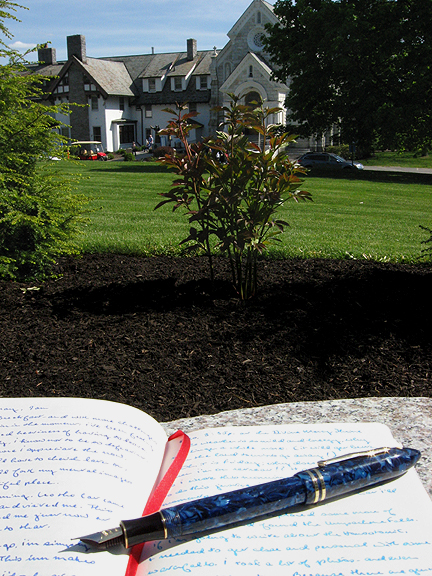 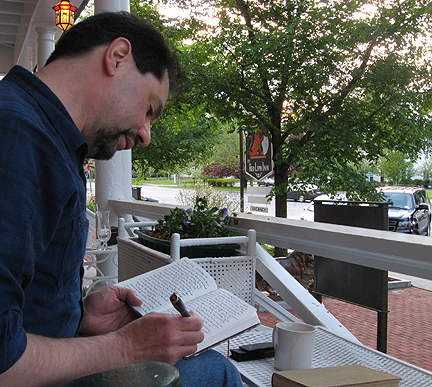 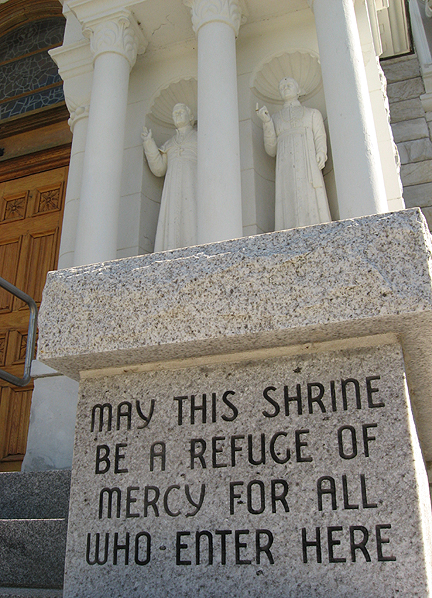 Posted by speculator at 9:50 PM

Always a joy. I have forwarded this to many of my friends plus my Franciscan group in Colorado. They derive the same pleasure from it that I do. Thank you Abraham!

Thank you for sharing your thoughts and prayers. Bouaketh