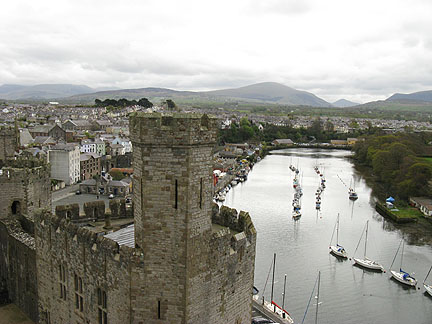 “Four ships at anchor in the river
Keeping close to pass Caernarfon castle
There are four yellow lights
And a boat is starting
Hear the sound of oars in water.”


Caernarfon Castle and its town figured prominently during my travels in Wales. The massive 13th century coastal structure, which extends as a castellated town center preserves and presents centuries of history. Caernarfon (pronounced c’NAR’von) is in northwest Wales, facing the Isle of Anglesey, and its harbor is at the confluence of the Menai Straits and the Irish Sea. Bangor is a short bus ride away. When my mother was visiting Caernarfon, the castle was being spruced up for Prince Charles’ investiture as Prince of Wales. On my visits, I saw displays commemorating Queen Elizabeth’s Diamond Jubilee in June of this year. Climbing each of the towers, strolling the small streets, and exploring the medieval buildings and castle walls provided numerous vantage points. 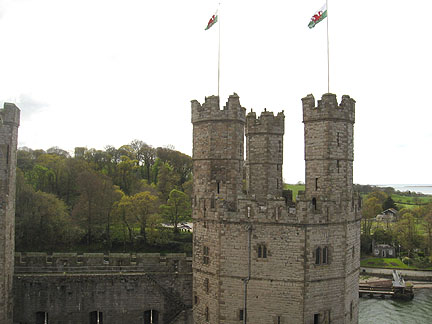 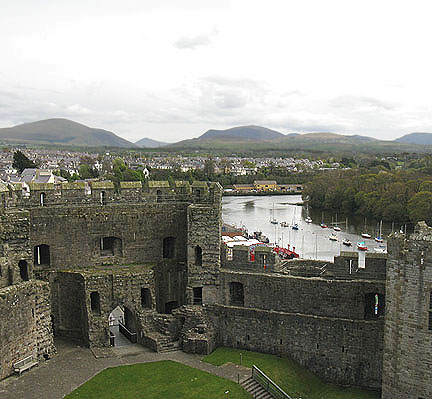 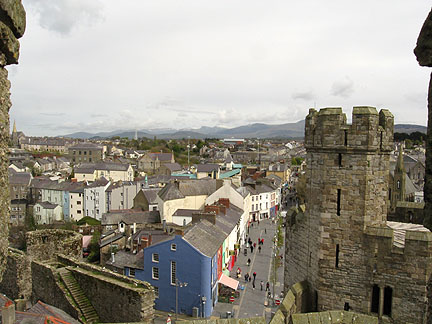 Viewing the harbor from the tops of the castle reminded me of the folk song about this extraordinary and ancient place. Descending from the walls and narrow streets, walking along the docks, and taking pictures, the melody swirled through my impressions. “Llongau Caernarfon” (“The Ships of Caernarfon”), a song I’ve known for many years, is about someone admiring the vessels in port that reach faraway places (such as France and Ireland) and wishing to be able to ship out on one of them, too. I’ve often hummed the tune quietly while aperch on the Maine State Pier, in Portland. Walking along Caernarfon harbor, and glancing up at the castle, reminded me of being “on the other side” of the Atlantic from the ledges of my home on Casco Bay. 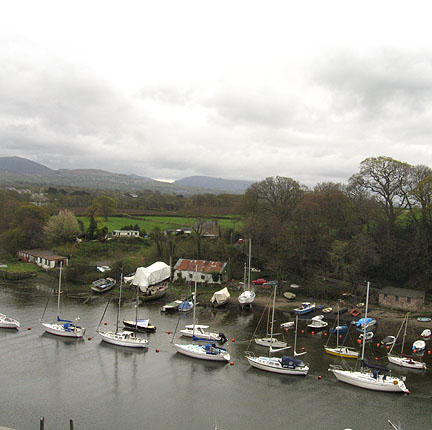 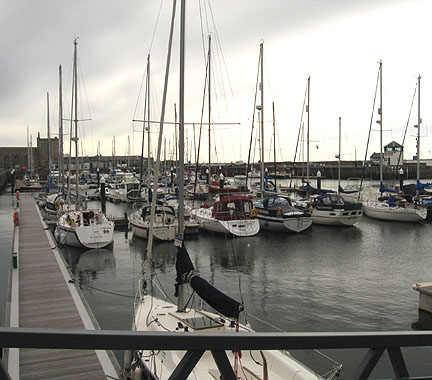 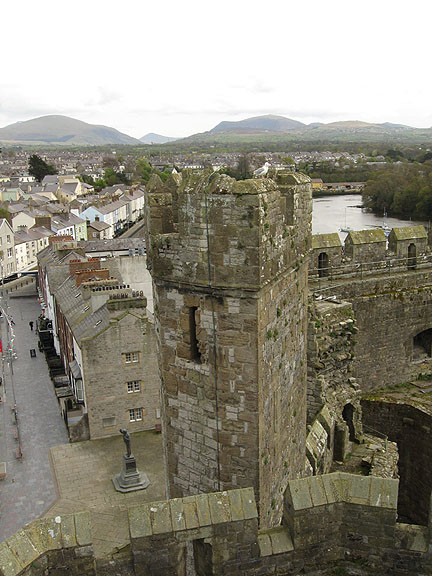 Caernarfon and the folk song returned to my thoughts as I prepared to participate in Maine’s first-ever Maker Faire, just a few weeks ago. I had volunteered to help present the large, public event, which went very successfully in a section of a renovated textile mill in Lewiston. The idea is to gather craftspeople and inventors with a spectrum of skills to offer instructional demonstrations and plenty of conversational interaction with all who attend. I taught and modeled calligraphy and bookbinding throughout a very full day- the former throughout the morning, and the latter during the afternoon. Preparation and the day itself demanded a great deal of energy, but indeed the finest reward of all was to see how many people of all ages want to know about these skills. It was a heartening experience for me. The calligraphy class I taught was full, with an overflow group. 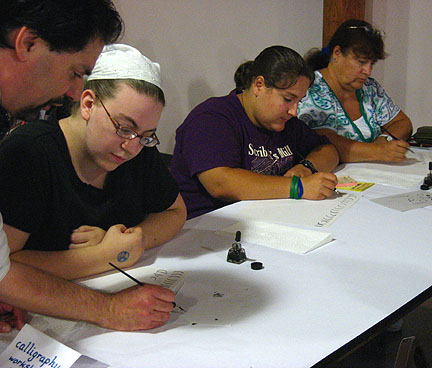 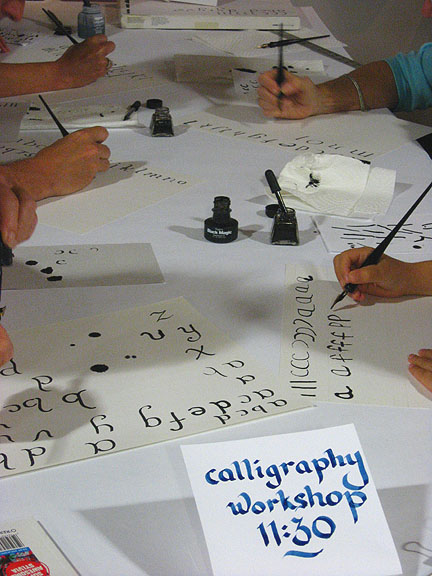 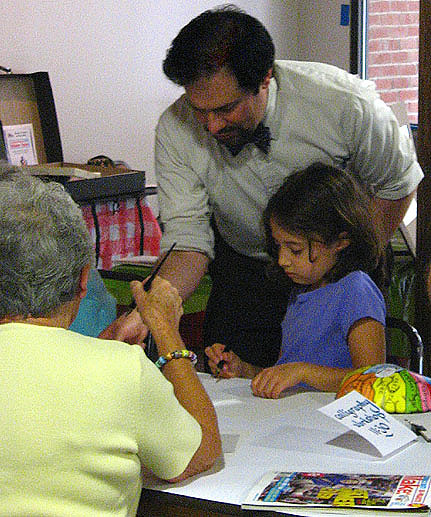 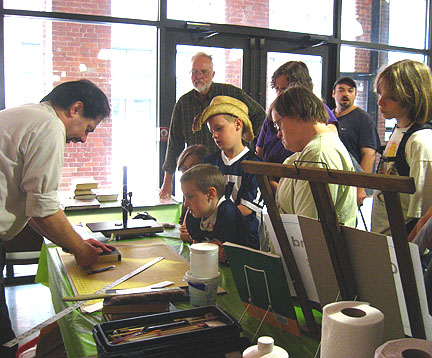 The work I do, in both calligraphy and bookbinding, involves creating or restoring materials that ultimately leave my hands. With calligraphy, the inscriptions, certificates, invitations, and cards I’ve made have been by request. As a result, I have just a few examples I can teach with. For the occasion of the Maker Faire, I decided to add to the teaching portfolio of typestyle alphabets and illuminated letters. The Welsh sea song about Caernarfon came to mind, perhaps because I’d so recently been there, and so I chose a stanza to illuminate. I made additional pages, using Latin and French, so that viewers could concentrate more upon the letter forms in the different scripts and colors. In one of the countless serendipitous moments of that day, a Welsh-speaker stopped to compliment the piece. 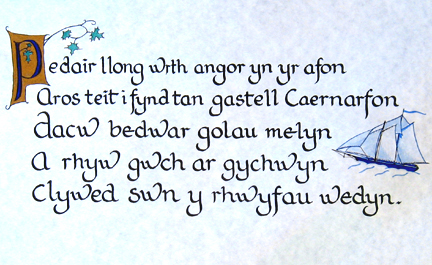 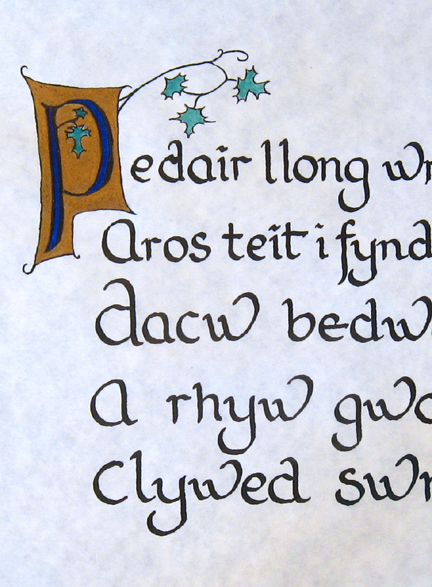 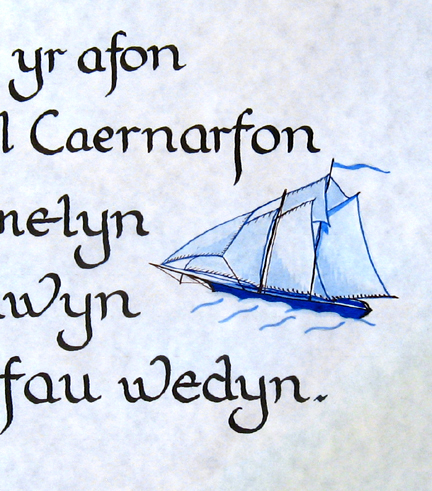 Journeys that have tapped into all our senses, including personal family histories, along with artistic and spiritual pursuits, amount to multiple layers of enduring impressions. I did not bring back many objects, aside from shells and small stones from some of the places I was privileged to have visited. Now thinking retrospectively about my first sojourn in Wales, what have I brought home with me? Or perhaps I may rephrase it as what returned home with me, in terms of perspectives and ideas. Many songs returned with me, both literally and metaphorically. These combine with images, words, and messages of what is good and grand and ground for my being. 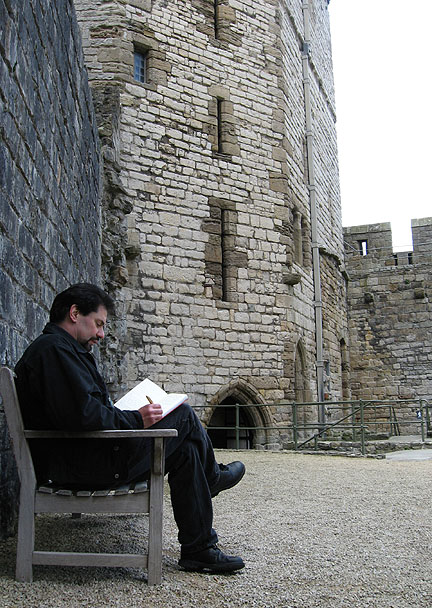 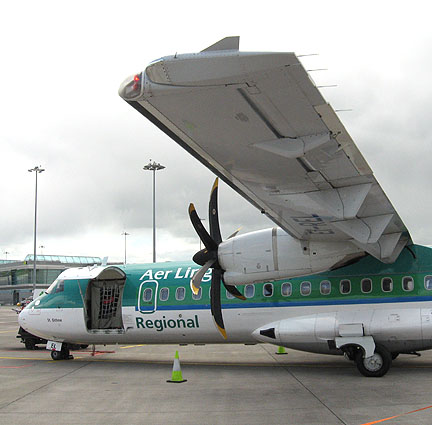 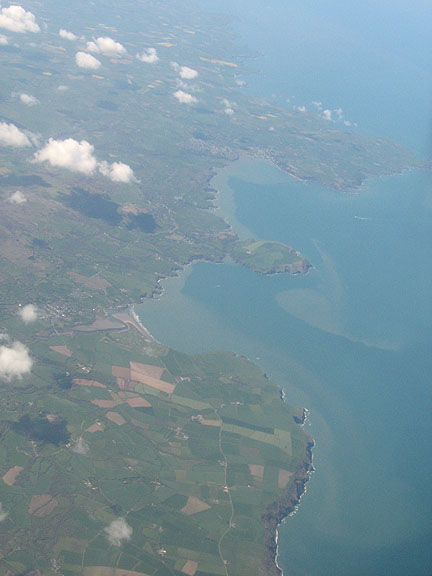 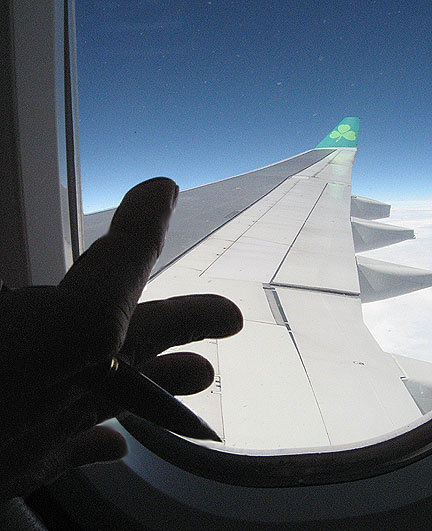 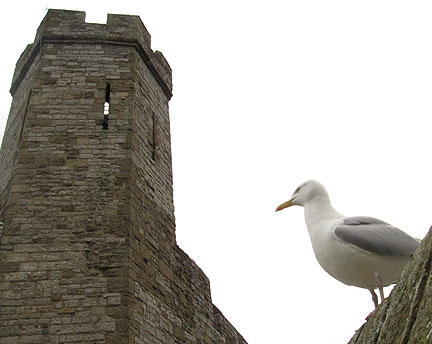 I look at your photos and read your posts and come away from your blog with one impression: Wales is a wonderful and beautiful place. Than you for sharing your trip.

Very nice to see the turnout for the calligraphy and bookbinding session.

If Lowell, MA isn't too far for you, you might be interested in this news: There is a screening of "The Typewriter (In the 21st Century)" at the Jack Kerouac Literary Festival in Lowell, MA on Tuesday, October 9 @7p, free, at Lowell National Historic Park Visitor Center. Details about the screening and the festival itself are here: