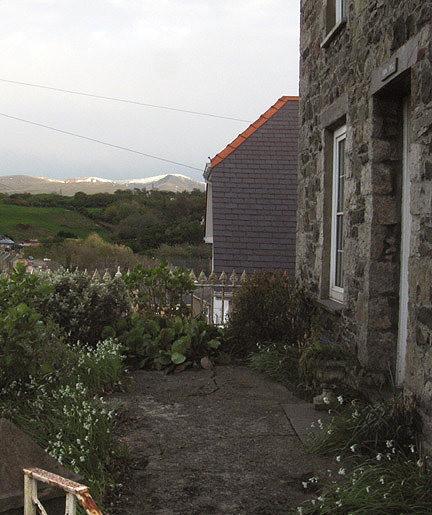 "In search of my mother's garden,
I found my own."

For as long as I can remember, since childhood, I’ve wanted to see the places of my mother’s recollections in Wales. Storing my mother’s words, stories, and image fragments from photos and artifacts into my own dreams, I’ve carried a kind of transferred memory within me. Now I’m profoundly thankful to be able to say I’ve just returned from a month of having been to these iconic places as a pilgrim on a beautiful trail which I consider to have been transferred to me by my mother. Coming from France as a young adult, she lived a short while in north Wales as a working college student; shortly after returning to France, she married and immigrated to America. Naturally, as a child- and up through my teenage years- listening to my parents’ memories captivated my imagination. Once upon a time they were like me, I’d think to myself, and I may become as seasoned and sage as they are. We spoke French, the mother country was clearly France, and from there I have a lifetime of lived memories of my own. But there were those sweet little maternal anecdotes about the small country that I was always told resembled Maine, between England and the Irish Sea, and with an ancient language so beautifully sung. “You should go to Wales,” my mother would say, “you would love it.” I’ve listened, and after all these years finally made the journey. The experience was an extraordinary one, with a strong sense of somehow visiting an additional mother country. 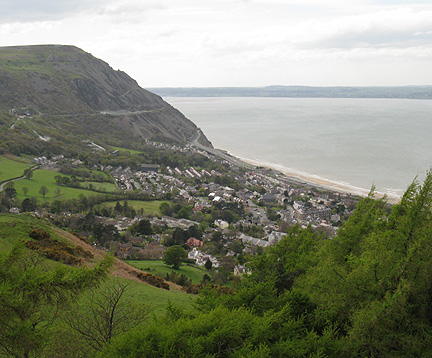 Surely, just about everyone can remember their own wide-eyed childhood absorption of their elders telling their stories and interpreting their artifacts. My mother would show me postcards and the notebooks she kept when studying at Bangor University, with sketches of the people and things that interested her- and how she had been learning the English language in a largely Welsh-speaking school. The notebooks even had crayon rubbings of the different British coins of the late 1950s and early 1960s. Now that I think about it, everything must have looked fascinatingly different and new. Being an undergraduate and a nanny in a foreign country is enough of a liminal stage in life, but this was also the postwar Europe of rebuilding and rationing. Yet the stories passed along to me were lighthearted and entertaining- and most of all, enchanting. I kept them all in my thoughts, and that archival soul safe steadily gathered more images, words, and dreams. 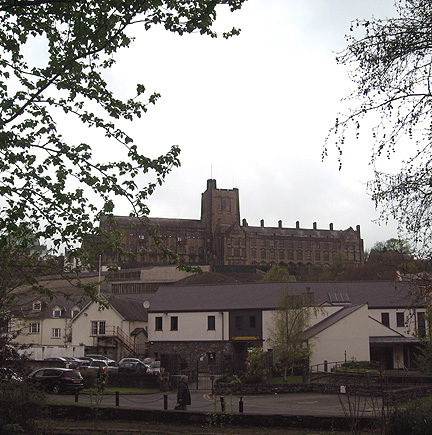 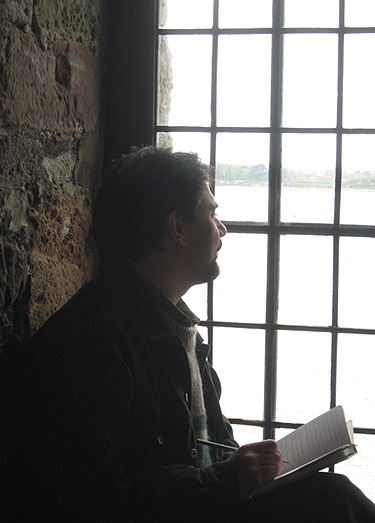 Enshrined in choice interior compartments, alongside treasured images and moments, my grandmothers’ words memorized, and things both Judaic and French, have been all things Welsh. That which is well-sown will grow and appreciate. With my parents’ encouragement, I grew to admire the introspective words of Dylan Thomas, the bold genius of Richard Burton, the cinematic How Green Was My Valley by John Ford (of Portland, Maine), and the immortal lullaby Ar Hyd y Nos. Implicit in being shown works of literature, films, and music with “it’s Welsh, you know,” was an equivalent to advising me that these are worthy- things to cherish and keep close to heart. Over the years, growing up, I now realize, my affinities and sensitivities cultivated simultaneously. King David, the harp-playing shepherd composing Hebrew sacred poetry in the Bible, was for me a grand chieftain and brilliant bard. I would think about this when, in my twenties, I delved into the words of ancient Welsh poets. With one exception, every journey I’ve made to Europe has had Paris as its destination. My thoughts always had the “someday” suffix about travelling to the Wales of my mother. I longed to go, and I needed to see. 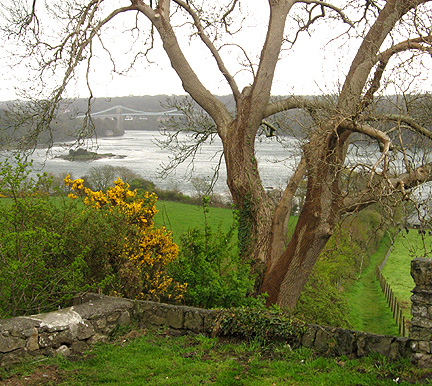 One of the great realizations about actually making the journey of a lifetime’s anticipation is that it is possible. There were many instances during the past month when this came to mind. Enjoying a cup of coffee, with my journal open in front of me, are very familiar activities. But then I’d look around at the shop signs near the Welsh tea shops, with mountains behind the town streets, and remind myself of where I was. The possible was actual. Arriving in Bangor, in north Wales, after some 30 hours of travelling on buses, planes, and trains, I needed to see the waterfront before resting my head for the short night. The sight of the Pier, the Menai Straits, and the Isle of Anglesey- places I’ve heard about all my life- told me I had surely reached my destination. “I’m here,” spoke my thoughts, “I’m really here.” Then I took some very deep breaths of the sea air. At that moment of arrival and wonder, I experienced an unusual combination of longing and recognition. The aromas of the sea, the trees, and the sloping greened earth strongly reminded me of Maine. It was a sensing of both the recognizable tangible and of the palpable unseen. Indeed, we tread upon holy ground with our souls. 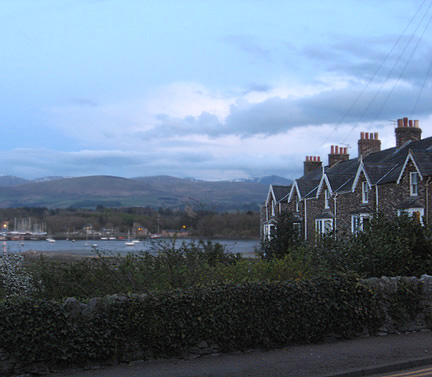 Walking as many of my mother’s footsteps as I could find was a humbling experience. With the gracious help of the town library, I was able to meet some of the members of the family with whom my mother lived, and even walked to the house I’d heard about since childhood. Though I didn’t want to make too much out of the journey, admittedly not having any regional ancestry, it was even more humbling to be told so often that I was welcomed “home.” To be embraced with lighthearted and familial inclusion was simply extraordinary. Somehow, coming from Maine added a fraternal affinity; there were many comments about “the two Bangors,” as well. Anticipating the exchanging of gifts, I brought boxes of maple confections from Maine. My mother was brave to go to an unfamiliar country at a young age, with very modest means, having survived World War II. Such thoughts accompanied my explorations of the roads, the university campus, and the shop-lined streets I’d long heard about. These paths are now shared with my own steps, and I’ve added a great many of my own. The ancient and enchanting Welsh landscape now lives within me, as treasure cherished in an earthen vessel. 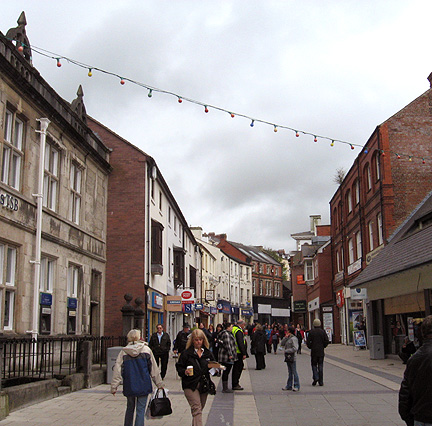 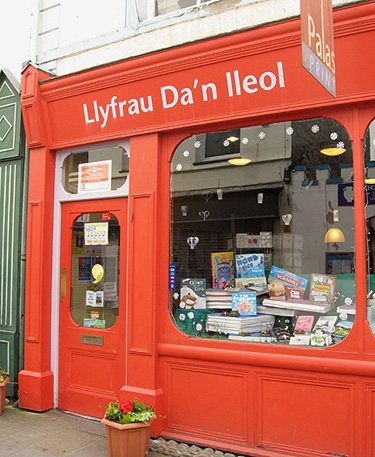 Certainly, this past month has comprised many adventures. Through twice traversing Wales, I wrote and photographed all along the way. Some of the journeys will surely appear in these pages. Now being back in my obligations, I’ll begin to reflect upon the travels. Pilgrimage always includes the return voyage, after which the pilgrim can recognize their own transformation. There’s still mud in the stitching of my shoes, from the miles and miles of walking paths. And, happily, even now when I close my eyes lingering images of terraced row houses, steeples, verdant hills, winding roads, and valleys emerge. 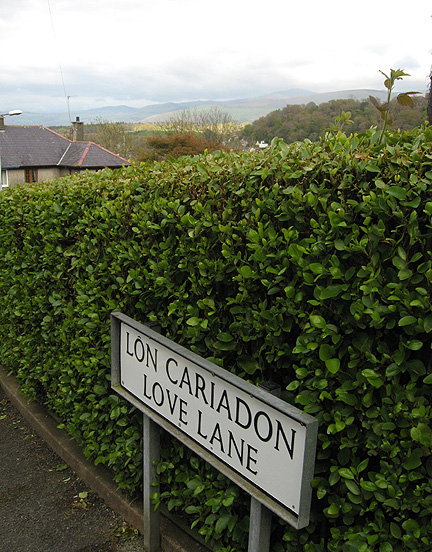 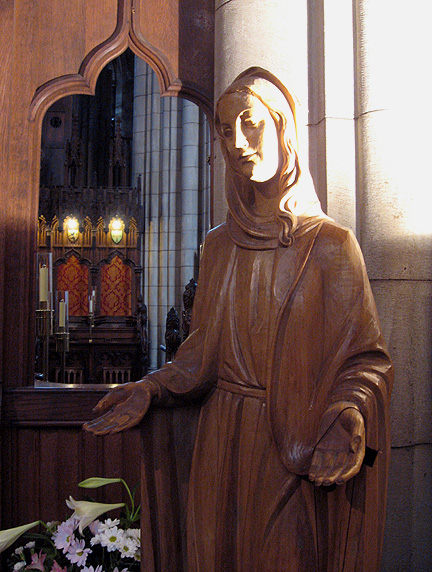 Saint Deiniol's Cathedral, Bangor
Posted by speculator at 10:21 AM

Very wonderful post. Wales is one place I have always wanted to visit and I have not yet made it. How Green was My Valley is one of my favorite movies. Perhaps because I grew up in coal country and so many things were somewhat familiar even though it was set in Wales.
I really enjoy reading of your travels.

Fabulous post Abraham! I must say I enjoy reading all of La Vie... but this one hit me hard. Beautiful!!!

I was getting a bit concerned about you, I always look forward to your posts about 2x a month. This explains it. What a wonderful trip and experience! I particularly liked the opening quote from Alice Waters. Indeed the beauty lies within each one of us, all we have to do is to find it.

Thank you for sharing this story and the great pictures, just excellent!!!

I'm so happy you were able to make this journey and can't wait to hear more stories of Wales. I also like the opening quote,it's .so true about all journeys. Welcome home!

Arriving in Europe does the same thing to me. Landing with teary eyes, goosebumps, a sense of homecoming - of being where I belong. Taking that first step out of the airport and breathing the air there. Nothing else compares!

I know exactly what you mean. I also have to frequently remind myself of where I am, and that it is possible to really, truly be there!