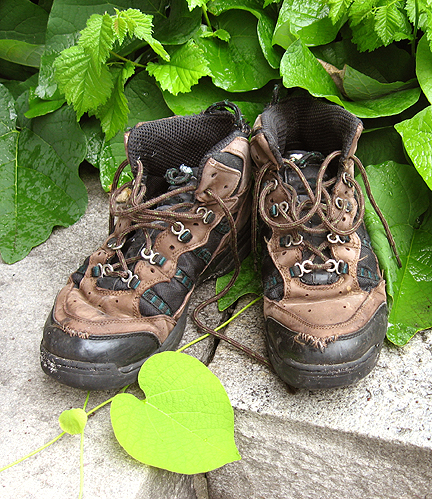 "We need not destroy any minor good in ourselves for the sake of a better,
but we should strive to grasp every truth in its highest meaning,
for no one good contradicts another."

~ Meister Eckhart, from his Counsels on Discernment


Aspiration meets a stifling challenge when our hopes shout into the winds of what try to convince us of the impossible. Certainly there is an appeal in a self-portrayal as hopeful, even superficially wearing the "positive" clichés. Indeed there is much to derive by directing ourselves in constructive directions, and clear skies provide plenty of visibility and sunlight for cultivating potential. And what of these beliefs when night falls, when daylight is obscured, and our senses become unusually cognizant of news stories that coincidentally feed the momentum of our fears? What happens when our sense of daring becomes elusive? Yesterday, during a high-speed highway drive a sudden torrential rainstorm struck. In spite of my careful navigation at a more moderate rate of travel, there were enough others hurtling their hydroplaning vehicles into left lanes, rushing to I-don’t-know-where (inevitably ending up a mere car-length ahead of me at the toll gate), slamming tidal waves of rain into neighboring pathways. On several occasions, I experienced that startling phenomenon of moving with a barraged windshield such that it was absolutely impossible to see more that a seamless wall of water. It would be like driving blindfolded among others having to do the same. Seconds as slow as hours. It’s still with me, and causes me to imagine how momentarily obscured vision can intensely differ from an utter loss of spiritual horizons.


Blaise Pascal had once warned that "if the small annoyances can discourage, just imagine what something major could do to you." Pascal was offering some perspective, perhaps speaking from his experience of maintaining determination while suffering incessant physical pain. Equally disciplined, yet coming from another vantage point, Meister Eckhart offered "it is harder at times for one to endure one little word of contempt, which is really insignificant, while it would be easier for that person to suffer a heavy blow against which we can steel ourselves." Further, Eckhart added, "it is much harder to be alone in a crowd than in the desert, and it is much harder to abandon some little thing than a big one." What might appear to be a quantitatively small matter could be qualitatively decisive. Have you ever lost those little pieces of metal called house keys? Ever have a bicycle encounter with a negotiably visible fragment of glass? Well then, what is insignificance, anyway? For those who have endured both scenarios of abrupt brutality and of gradual neglect, the traumatic effects can be quite similar. And so Pascal’s and Eckhart’s angles are reconciled in the wise resolve to choose attentive vigilance.


Our collected years can bring us to either barricade our hearts into fortified resistance, or to a strength of recollection that sensitizes our hearts into open compassion. The latter way incorporates the challenge to vigilantly patrol the heart, to keep focused upon what causes our hopes to surge up above the surface of what we deem as our limits. It is buoyancy in the drudgery, the type of hope that locks horns with the insurmountable. Staying confident while we easily find what appears to be enough evidence to abandon faith. Vigilance of vision can exhaust the human spirit, and invariably, with weary steps, we find the limits to our mortal striving. But thankfully, if vision becomes clouded and soreness derails, we can remind one another that discouragement is the "almost-worthy" opponent, because truly it cannot overpower the brilliance of our passionate yearning.

Posted by speculator at 9:50 PM

What a lovely post! And the last line is like something out of a poem, truly beautiful and as usual, very thought provoking.

I can never write a piece that profound. It would be more of a challenge for me to write about every day thoughts than writing fiction.

"because truly it cannot overpower the brilliance of our passionate yearning."

So well said...as always, thank you for this. You have such a wonderful mind and I am so glad to be able to read your words.