“There is to be action to accompany faith:
we are to struggle and fight on, but while we yield to the Spirit’s impulse,
it is God who works within us to do what is honorable.
If we will but resign ourselves, and no longer be obstacles in the divine way,
we will be carried to greater heights of grace,
and be transformed more fully into the likeness of Christ.”

My previous essay discreetly made reference to the impending loss of my housing of several decades. If functioning productively through the ongoing pandemic hadn’t been enough, my nightmarish fog is thickened by not knowing where home will be. Often through the years, my place of residence has been the steadfast sanctuary amidst turbulence and trials. Now, the very ground beneath my humble and reliable perch is being shaken away by the sale of the building amidst the city’s scourging gentrification. My neighbors and I talk about how frightened and frustrated we’ve been. And we are far from the only ones dealing with this sort of displacement in Maine, or throughout New England for that matter. I’ve reflected about the subject of pilgrimage throughout my years of writing; the whole of life is an earthly pilgrimage of trust. In the spiritual expression of making a journey, there is typically the journey home. Ordinarily there are intentional travels- sometimes quite arduous- to a place of communion and community, or solitude, or all aforementioned, during which there are heartening experiences followed by voyages of return. In my case, I have been returning to my same apartment through most of these years. But pilgrimage, being a physical form of contemplative enquiry, can surely tunnel into undefined darkness. Understood principles of the momentary are put to perilous manifestation. 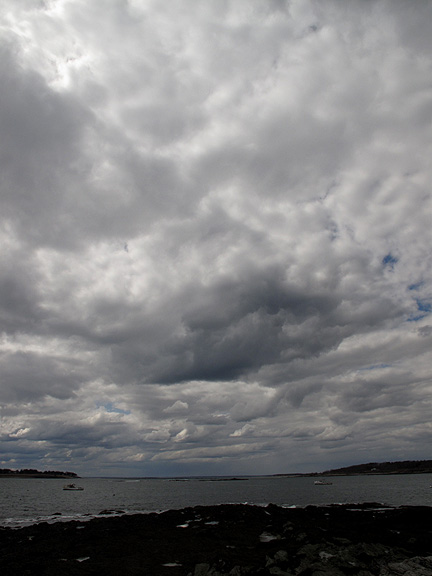 My father used to say that hunting for housing is in that same category of horror as hunting for employment and hunting for a worthwhile automobile. I’ve known all three. The former two are more than both armsful, and the latter is something I stave off with the help of a good mechanic. As it has been for just about every aspect of life, short of the teleconferencing and remote-work software businesses, this is an egregious time to be hunting for a place to live. The pandemic economy has untethered workers from physical confines of large cities, prompting many to relocate to fresh-air places such as northern New England. Maine has been gutted by closures of local businesses, while the resort-style economy has exponentially inflated everyone’s costs of living. The outmigration of displaced and discouraged locals has been more than equaled by incoming remote workers and retirees; these factors, combined with successions of local officials who typically look the other way, serve to exacerbate the housing shortage. Having witnessed these phenomena through the decades, I have seen how constructed residences are either six to seven-figure condominiums, or compartments for the destitute. The rest of us claw for our lives and livelihoods. A good friend of mine manages a well-regarded downtown restaurant, and he recently told me that in spite of how he has helped his employees find housing, he constantly loses staff due to their losses of their homes. Now that I am forced into the battlefield, I’m experiencing what has happened to the process of searching for an apartment: much as it is with job-hunting, but acutely worse, it is a combination of lotteries and beauty pageants. On top of that, there is a disturbing prevalence of scamming and fraud, leading searchers to have to verify if the places in the online pictures are really those of the addresses listed. The days of cardboard “For Rent” signs in windows are long past.

Negotiating this uncertainty oscillates between trepidation and open horizons. Purging, packing, selling, and giving away things are all part of a protracted farewell. The load is lightened. I’ve seen some repulsively squalid apartments, and a couple of better and more liveable places. Determination and desperation drive the search forward. The behaviors and decisions of landlords, much as with workplace administrators, are out of the reach of an ordinary person of modest means. What is more within reach is to be prepared and ready to make that necessary move. Perseverance is running up against daunting odds. As yet, there are no conclusions. 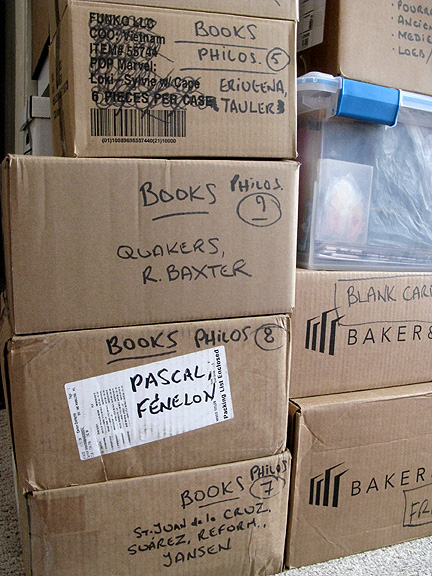 The unsettling uncertainty is as intense as what I’ve begun referring to as The Glaze. For those of you who have had to force yourselves to sift through every single thing you own, at the most rapid pace you can manage, you know The Glaze. It is a kind of emotional and intellectual disorientation and exhaustion that results from the overwhelm of examining personal effects. Being a lifelong apartment-dweller, I don’t consider myself as having an enormous amount of things. I noticed it when I began purging paper-based material. The experience was such that I decided to categorize all my material by genre, as I do when I curate archival collections in professional life. 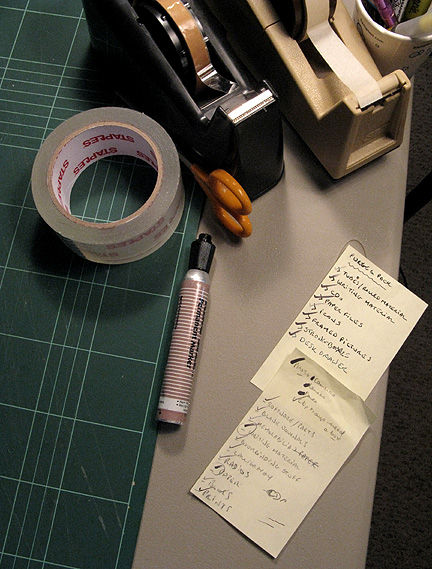 I made lists, based upon assessing my accumulations; in curatorial language, it would be series and subseries as the materials dictate. Going after my largest categories, photo-related material (prints and camera gear), papers, and books, I found that it was necessary to intersperse the work with smaller categories. That dizzying glaze was especially powerful and daunting, particularly on weekends when I was cramming in as much purging as I could. Eventually, I took time off from my job (“vacation time”) so that I could systematically march down my lists, adding in various intermissions so that I could back away from The Glaze as needed. Still, that stifling and stagnating stupor continued to slow my progress. After I packed all my music recordings, I kept the radio on, to help me keep going. I also took breathers to drive donations to charity shops. Inevitably, I collated all that I own, either for retention or for deaccessioning, in seven painstaking and restless weeks. On one particular Sunday night, I experienced a glazing that was so intense that I could neither write in my journal nor sleep. But the purging is done, and the packing is complete save for day-to-day necessities in anticipation of a thirty-day evacuation notice in the unknown near future. 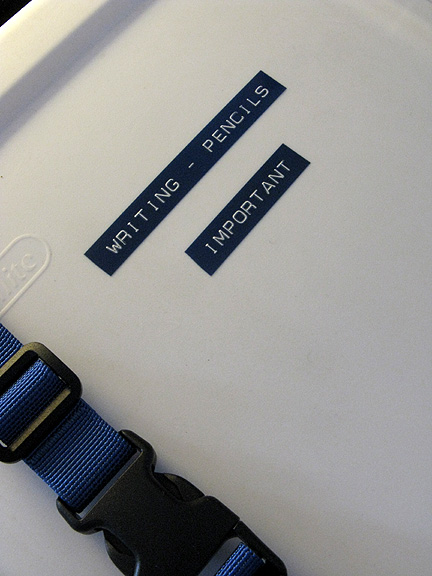 Part of what made the covid era so life-altering was the forced change of all our perspectives. Lockdowns, social distancing, and wearing masks all became habits that worked their ways into unspoken daily life. My proactive readiness to be as mobile as possible is actually a preparedness to be reactive when my present housing comes to its inevitable end. My perspective of many years about the meaning of home has had to change. Another stark reminder of perspective occurred during a glazing day of purging last week. Down the street from my living room window there are several public benches which are mainly used by street people, and by smokers who cannot indulge in their buildings. Getting outside to divert my anxious glaze, I noticed the flashing lights of emergency vehicles and at least a dozen medics trying to revive a fallen man. They were rotating their administering of CPR for a long time, making great effort to rescue this unfortunate, ragged man who may have been homeless. I refrained from staring, but intermittently went outside joining some of my neighbors hoping to see that he would be all right. After what seemed close to an hour, the large group of first responders finally stopped. It was gut-wrenching to realize the man had passed away, and the valiant medics looked depleted. Then more city officials arrived on the scene of this unsettling sight. Someone like me being put out of my home still has a life and can at least find another place. I needed to get out and look at some different scenery, and the sky. It occurred to me that I hadn’t been out of town in nearly two months, because of this crisis. Rolling tape and tying string around boxes, one after another, marking the contents with a big squeaky marker that smells like shoe polish, I thought about how I will miss my crated prized possessions. To be sure, I left some selected writing materials and a few beloved books such as The Cloud of Unknowing unpacked, to be handy right up to crunch time. It’s the burying of treasure, with struggling hopes that I’ll be able to park, unpack, and regather in a better place. 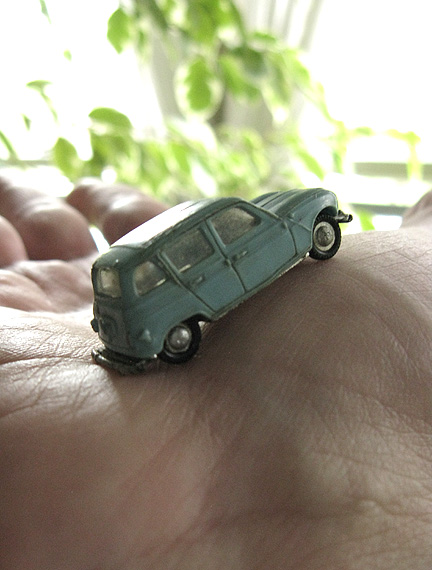