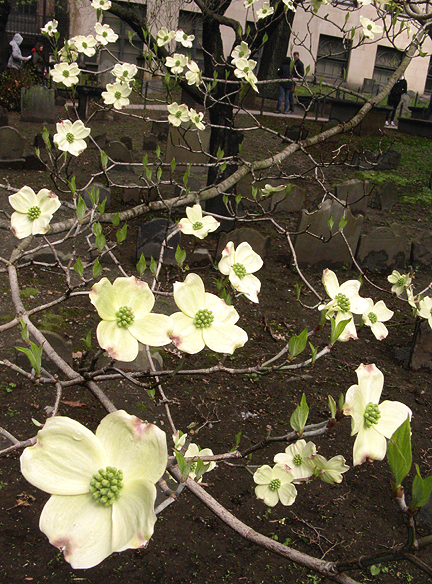 “I am reminded of spring by the quality of the air...
It is a natural resurrection, an experience of immortality.”

Perhaps we have yet something else in common: a sensitivity for the signs in our midst. In this context, such signs are far less subtle than the posted arrows and titles we see along roads. Though we could also think of these as directional, the sorts of signs we can only sense are untitled- at least initially. At this time of the year, the seasonal transition is tangible in the elements. The span of daylight lengthens, temperatures increase their margins above freezing, and there are noticeable changes in the landscape. Such signs tell us to look ahead. 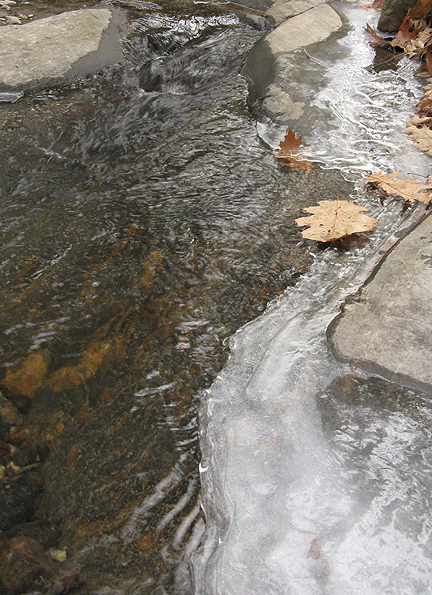 Above: A melting stream, near Portland, Maine
Below: Beacon Street, Boston 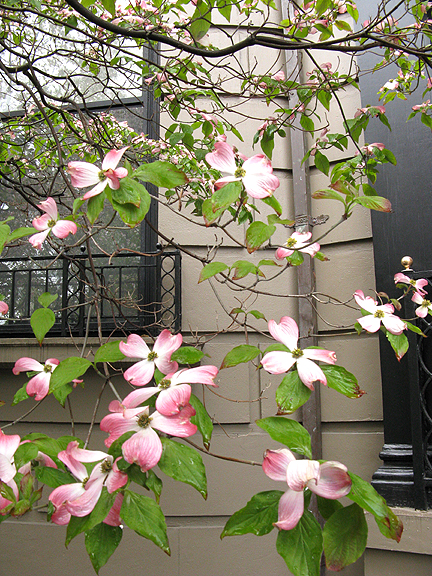 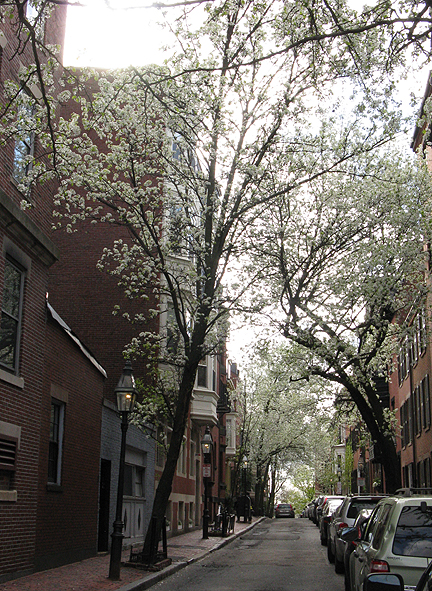 
In this part of the world, the early stages of Spring have been unusually protracted. Northern New England, now in May, still has frost at night. With natural signs so slow to take shape, it’s certainly easier to savour the transition. My corner of Maine is damp and chilled. But I happen to enjoy this very much. Rather than bothered by cold, this January-born Portland Mainer wilts when the temps exceed 70° (roughly 21° C), and I find it easier defending myself against snowflakes than against bugs. Indeed, I’ve surely learned to appreciate the big picture’s many facets, and to see the differences in the ways seasons manifest. For the observing writer and photographer, there is much to notice- both the subtle and the grand. 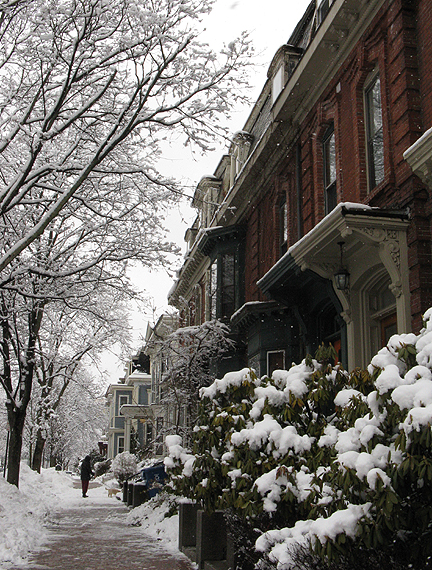 Above: Spring in the West End, Portland
Below: Meanwhile 120 miles away in Back Bay, Boston 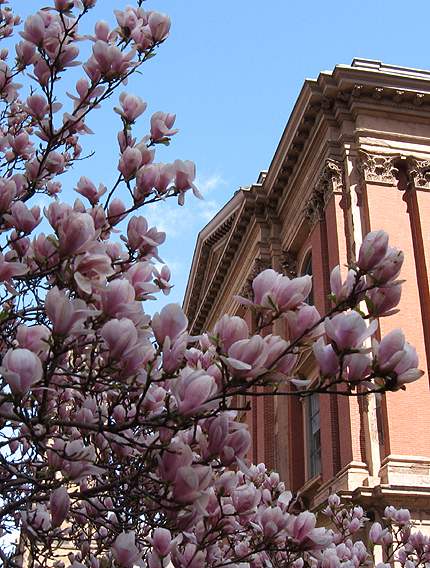 Thoreau, living along Walden Pond, about 110 miles southwest of Portland, wrote beautifully about the reminders of spring air. 40° in early May is quite distinct from a 40° oddity in December. There is an inviting quality to the Spring rendition of that air. One obvious difference is how the temps abruptly drop as the sun sets in winter; warmer evenings are evidence of Spring’s arrival. The air also has the aromas of awakened strata. To better appreciate these low-forties, I’ve already put coats and jackets away. My experience of Spring air is an immersion, reminding me of freshwater swimming. I remember a sweltering summer day, during which I’d been driving through Grafton Notch, in western Maine. Stopping to hike to a swimming hole I’d heard about, I found the location- at the base of a waterfall. It was a very hot day, and that mountain water was very cold- but I jumped into something as startling as it was invigorating. After a short time of surmounting the shock, I got used to the water and thoroughly enjoyed it. A good saunter through cold Spring air is a similar kind of soak to be savoured. 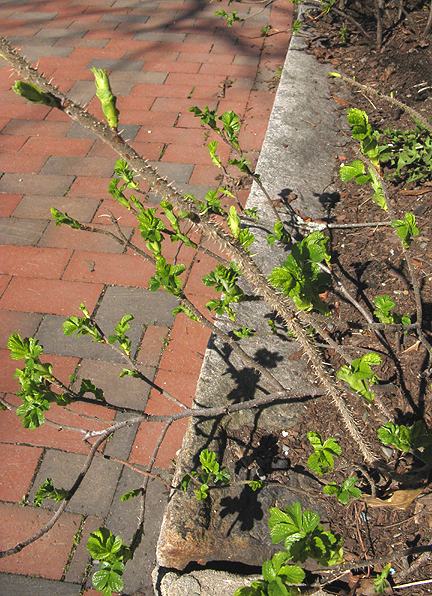 Above: Portland, Maine catching up
Below: Spring wonderment in the Boston Public Garden 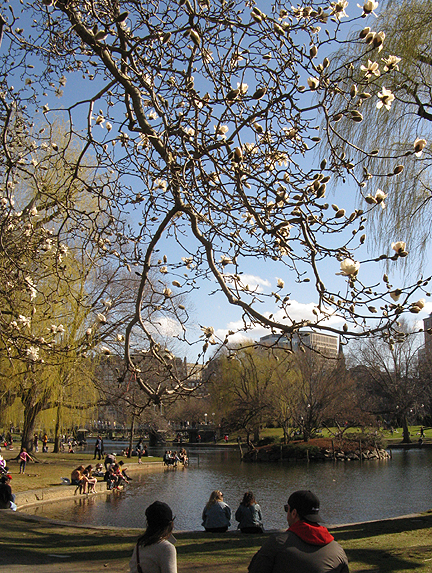 Associating the wafts of Spring with resurrection, as Thoreau observed, is especially meaningful after the dark winter months. A community that is very close to the elements of New England wilderness is that of the Benedictine monks of Weston Priory, Vermont. Among their lyrics is the refrain, “new life, new creation; alive our sense of wonder.” It is easy for me to call these words to mind, given a chance to leave the beaten track of commuting, and to simply observe the melting streams, the changing tides, and even to slow my paces along downtown Boston streets. I can fairly well predict that with this extended liminal neither-nor season, the forties will immediately become seventies- as it happens in these climes. All the more reason to hold some written thoughts. 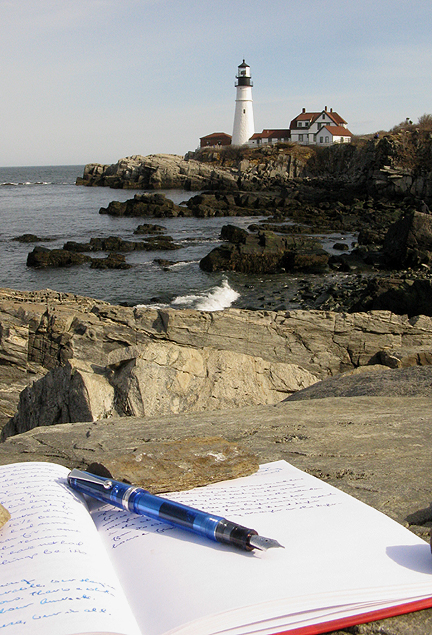 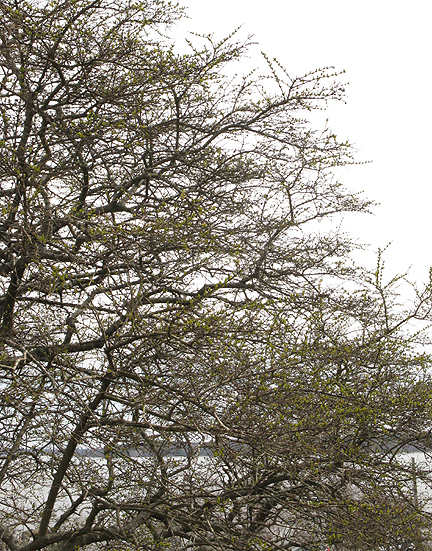 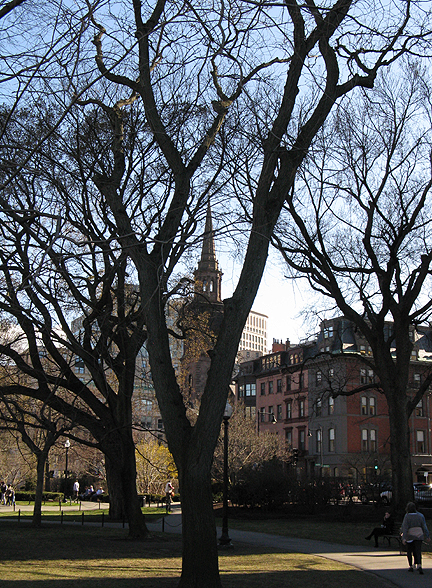 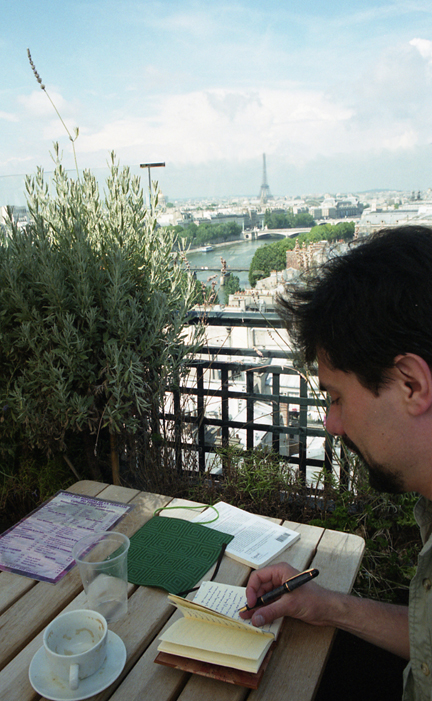 Appropriate to our theme, aperch atop the Printemps department store, Paris.