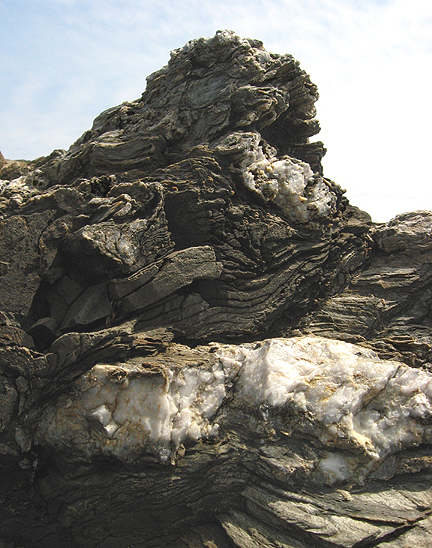 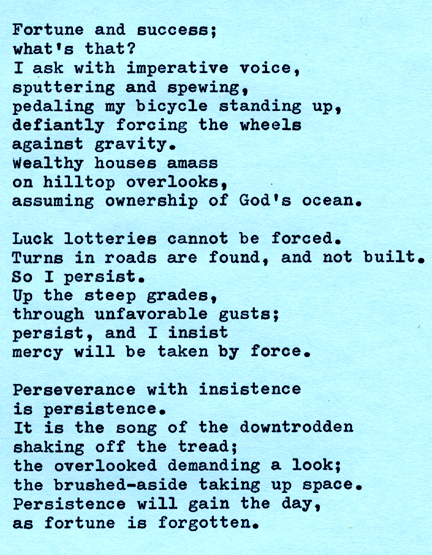 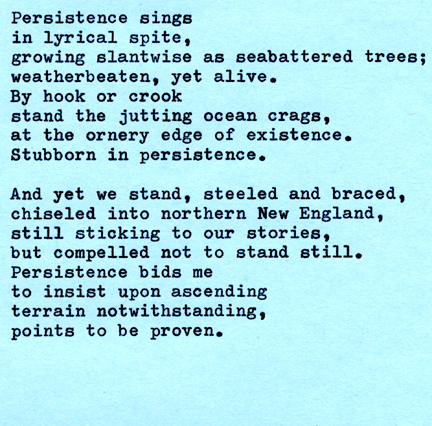 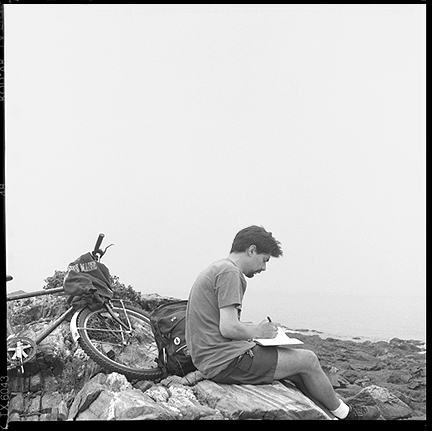 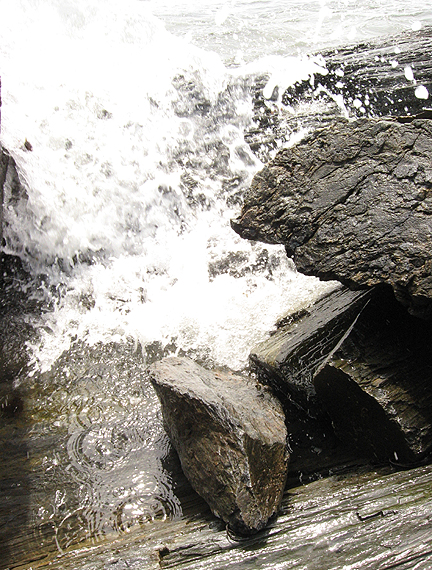 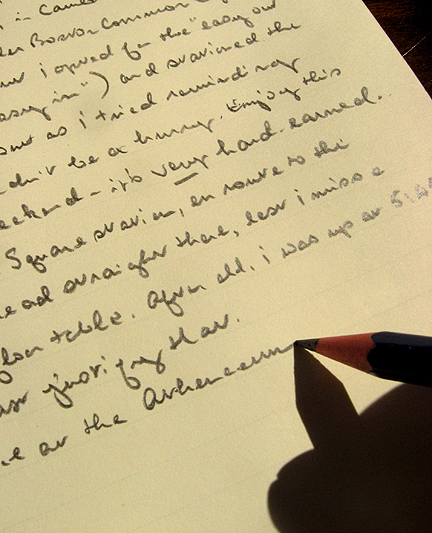 “An observing spirit
can thus derive pleasure from the most
trivial circumstance.”

~ Thomas Cogan, Treatise on the Passions and Affections of the Mind. 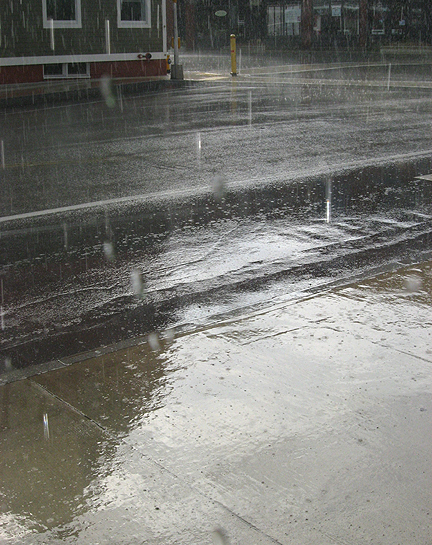 In this fledgling, burgeoning season yet untracked, I take up the pencil anew. Just as the approach of Labor Day weekend annually brings school beginnings past to mind, so late-April rain rekindles the sense of semester-end promise. Gradually, it is becoming easier to write outdoors. Lengthened days remind me to get out and away from walls and ceilings- when possible. Apparently there is life to be lived, aside from the constant dawn-to-dusk workday grind. As daunting as inertia can be, rote repetition of denial has its detriments. Self-limitation can become a debilitating habit. By recollection and writing, at least in spirit I can vault the fence. It does mean expending energy, for a measure of transcendent vigilance. But it’s worth it, and the alternatives would be still more regrettable. 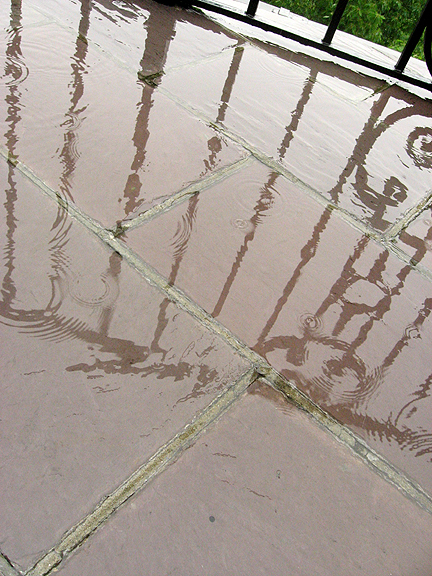 Back when I had some schedule flexibility at my job, I’d take my coffee breaks outside- even in winter- as daily as I could. Occasionally this is still possible. My pocketable idea journals- after which I named this blog- have been constant companions for years. The musings and fragments are the ingredients for essays to be developed. Aperch on a public bench or at an outdoor café, I’d scratch down the date and time, then pencil some ruminating words beneath the quick heading, graphite today. Not exactly enough time for substantial stream-of-consciousness writing; perhaps more like rivulets. Such trivial habits create links that maintain the vital momentum of inquiry and ideas. Re-reading the lines and pages of these small books help me retrace my discoveries and thought processes- and at present I’m able to retrieve morsels of confidence to continue. 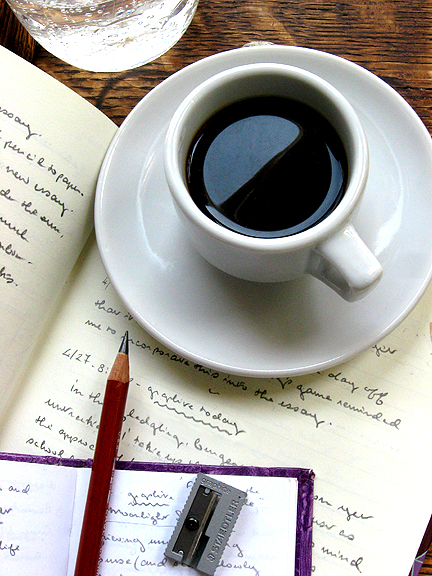 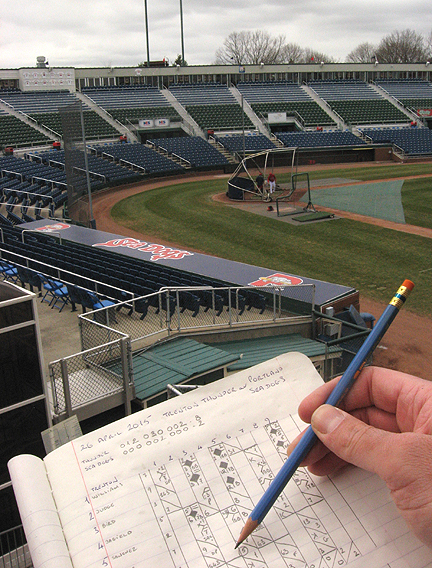 At the season’s threshold, attending a baseball game, it was impressive to see the bright and well-tended grass on the field. The rest of Portland is still shaking off the ashen grit of a protracted winter. But the pleasant distraction of time measured out by innings has similarities with my writing intermissions: these microcosm journeys have lives of their own. Within the common threads are my pencilled notations. The intricacies of play-by-play baseball scoring are best expressed in sharp pencil. In the province of graphite, notations can be corrected and emphasized with the game’s progress. Causes to adapt a play’s documentation include a fielder’s choice, a passed ball mistaken as a wild pitch, a force-out, or a stolen base. Space needs to be made for pinch-hitters and relief pitchers. As umpires will occasionally amend a call, the erasable medium capably responds. To erase is human, indeed. 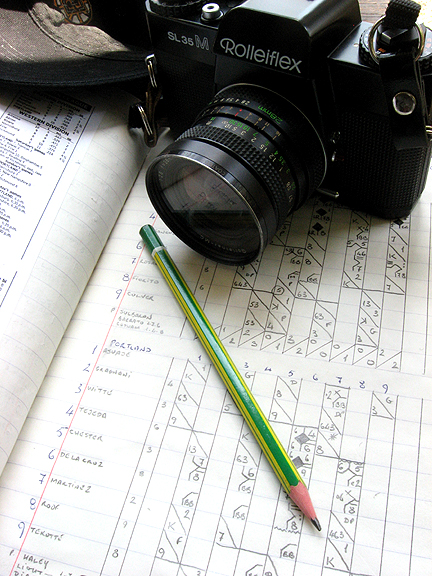 The materials and instruments of a craft are means toward ends. In their respective contexts of writing and photography, scribal and image-recording tools serve to record perceptions. In turn, recorded thoughts are elements with which creative works are constructed. Well-crafted tools can have their own intrinsic value as objects. Such extensions of our creative selves present inherent inspiration.

For the moment, on the topic of the humble pencil, I’ve long found this particular writing medium to be as patient as it is tactile. Following pensive spells of recollection- which are misinterpreted as stoppages- a pencil will not dry out and have to be re-inked, as is necessary for pens, nor will the display of text shut off, as it happens with computer screens. I prefer writing instruments that wait for me, as opposed to my having to compensate for syntactical dissonances in the tools. (Ponder that, during your next download, update, reboot, server failure, and virus scan.) With the pace- whether fast or slow- is the proprietary way a pencil changes while it is in use. A sharpened point broadens to a smooth chisel edge that mirrors the angle of the writer’s grasp. Similar to dip-pen writing, emphasized downstrokes reflect as bolder lines. With enough writing and sharpening, a pencil transforms into something weathered. Wood dissolves into shreds and sawdust, the eraser (if there was one to begin with) flattens, and its temporal life shortens as its stamped lettering disappears. Like nutrients, pencils are provisional- vehicles that are transformed en route to their intended purposes. 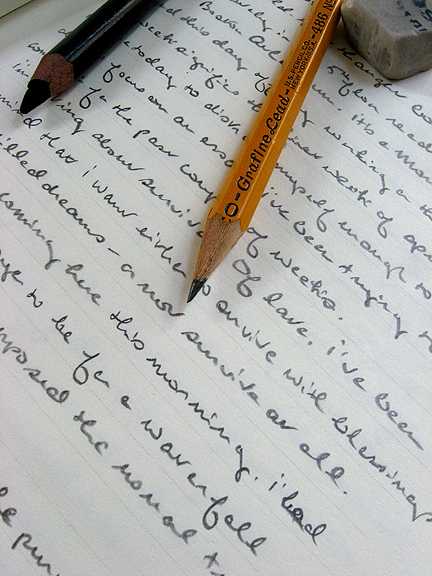 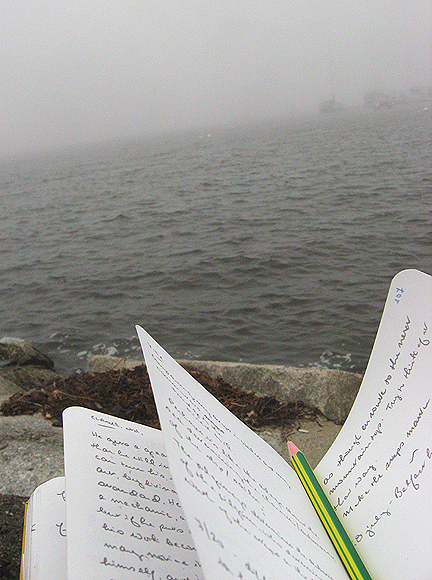 Through a meandering journey measured in jots, my pencilled notions represent various reaches. Sentences scratched in curved graphite parallel my often fractured prayers: constant and unvarnished. But these held thoughts are purposeful means toward ends. I develop ideas and observations by tracking and articulating them. Pilgrimage is surely a voyage of comprehension. In the 18th century, Thomas Cogan wrote voluminously about emotion and philosophical speculation, in his Treatise on the Passions and Affections of the Mind. He described our abilities to cultivate ideas as a testament to our existence, fascinated by the ways we know that we possess our ideas. Cogan describes an idea as follows, from vol.2, p.153:

“It is that wonderful something which pertains to the thinking principle, it is its exclusive property, is indicative of an awakened state of mind, and which the mind knows to exist with such an infallible certainty, that we consider the conscious possession of ideas, as the strongest evidence of our existence.” 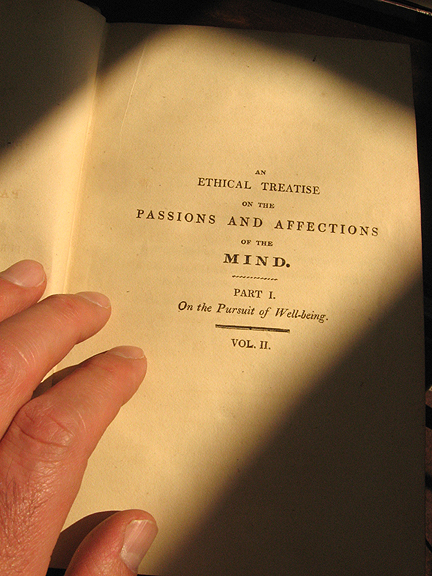 Speaking for myself, not all my ideas are wonderful somethings, but wonder is surely a motivating ingredient. Writing, reviewing, and writing more ideas provides a continuum of recorded motion. Thoughts may be expressed into tactile and tangible lines in a notebook, for example. Instruments and surfaces for our ideas have their primary qualities- in this instance, the intrinsic properties of the physical writing tools. From there, an individual’s creative discernment can derive secondary qualities- impressions- based upon practice and experience. Strong sunlight upon writing-paper that reflects the warm end of the light spectrum; the sound of pencil-point upon the surface; the aroma of sharpened wood; the sense and warp of paper humidified by ocean winds. 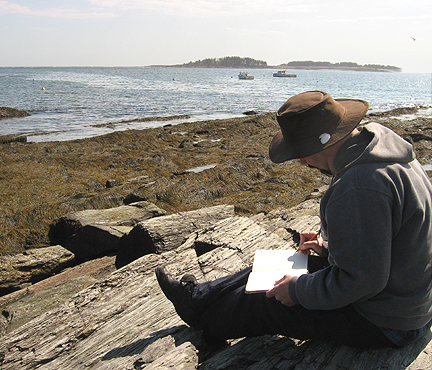 During one of my always-enlightening lunches with an elderly Chinese colleague, we talked about classical “thinking gestures.” Comparing generalities and tendencies of East and West, we noted the tradition exemplified in Auguste Rodin’s Thinker, with head-holding gesture. My friend described the Asian gesture of a “thinking philosopher” as having folded hands across one’s torso. This brought up how western spiritual practice has tended to emphasize the mind, compared to eastern practice emphasizing the heart. Even the classic Eastern Christian teaching about contemplation has been to “descend into the heart” so as to make ascent. 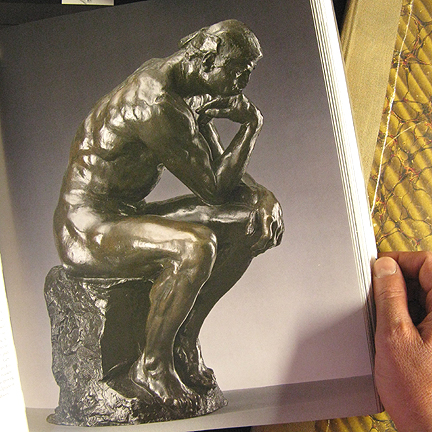 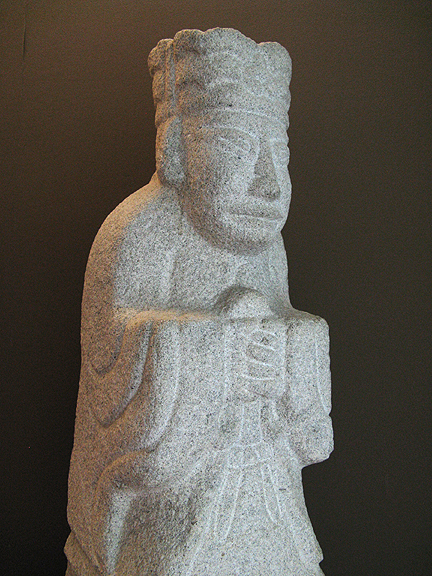 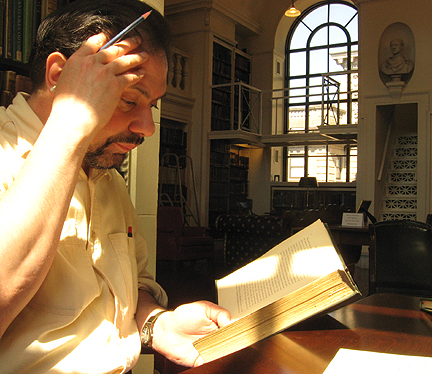 One day last week, having successfully stolen away to read and write, I suddenly noticed my own gesture while trying to fathom a very complex text. My hand tends to prop my forehead, while holding a pencil. Comprehension may require writing down something! Hence the digestion by the soul, via the craftsman’s motion. Pursuing the essence of the sacred draws the writing outward and onward, often drawing the map while the exploration is in progress. Realizing this, I gratefully look ahead to more graphite todays. 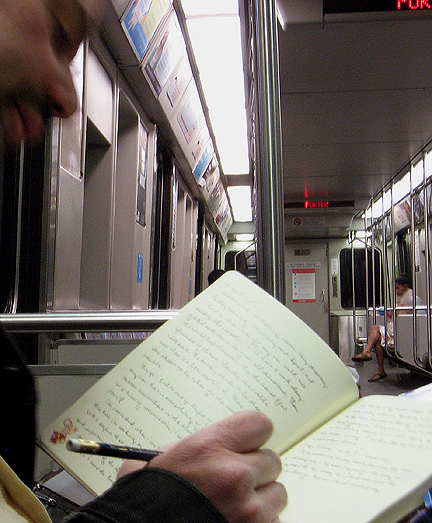 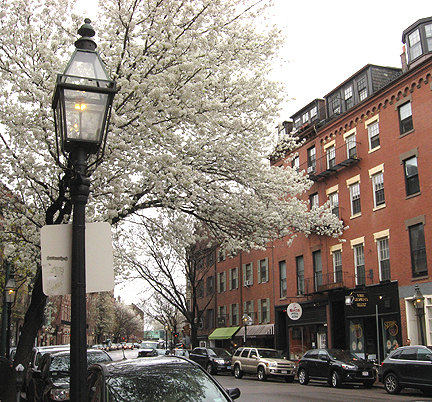